Why the Fly? – By Dave Donald 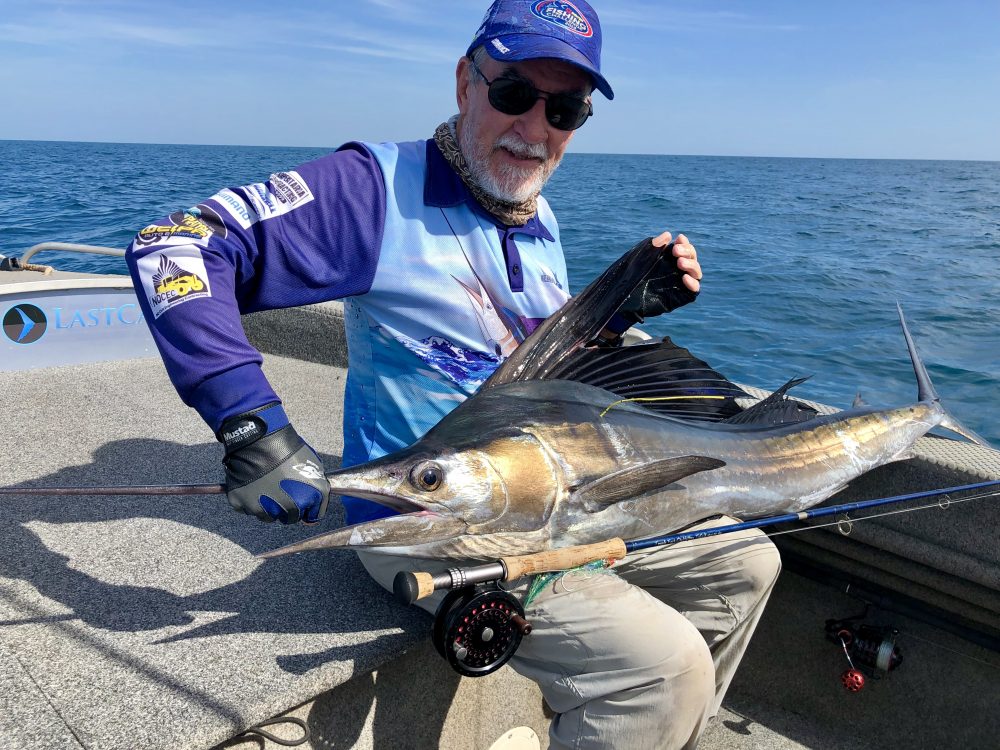 I spotted the tail from about 30m away and stalked as stealthily as possible in the ankle deep water towards where it was waving in the air. Jelly prawns showered with each step, tickling the tops of my feet as they brushed past. The forked tail and first couple of centimetres of body appeared to be very busy keeping the fish’s head focussed downward on the shallow clump of rocks where it was actively feeding.

The tail disappeared just as I made the cast! Bugger! I’d probably missed my chance, but as I flicked the Clouser forward, an opaque shape materialised and swiped at it savagely. I felt a heavy tap as the fish missed the hook and absolutely deflated when it failed to return for a second try. The fish had been a sizeable golden trevally and opportunities to sight cast them from the beach when ‘tailing’ was as scarce as a metre twenty barra! 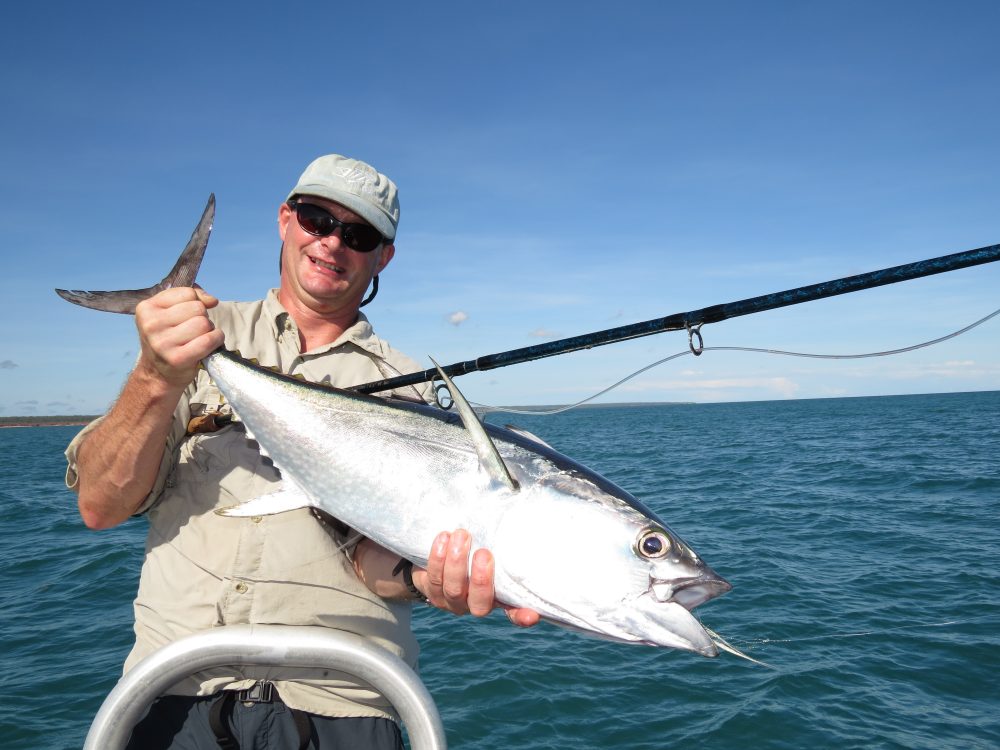 Nick with a chunky longtail tuna taken on a cast fly. They can be frustrating to chase and present a fly but the smoking runs and tough fight make them one of the ‘must catch’ species.

I suppose I stood there for at least five minutes feeling sorry for myself before the tail appeared back in the same spot, directly in front of me. Somehow, I controlled the adrenaline that had begun to fizz again and popped the cast about half a metre to the right of the tail V.

The reaction was almost instantaneous as the fish turned and sucked the fly down, probably mistaking it for a prawn fleeing the coral, stirred up by the racket those big lips made while munching the bottom.There was no way that tucker was going to escape for a second time.

At my end, the fish seem confused at what was going on, shaking its head several times as I applied the pressure. I was initially worried that the leader might get rubbed off on the rocks, but the big goldie finally became mobile, making a headlong dash into deeper water, a move I silently applauded. 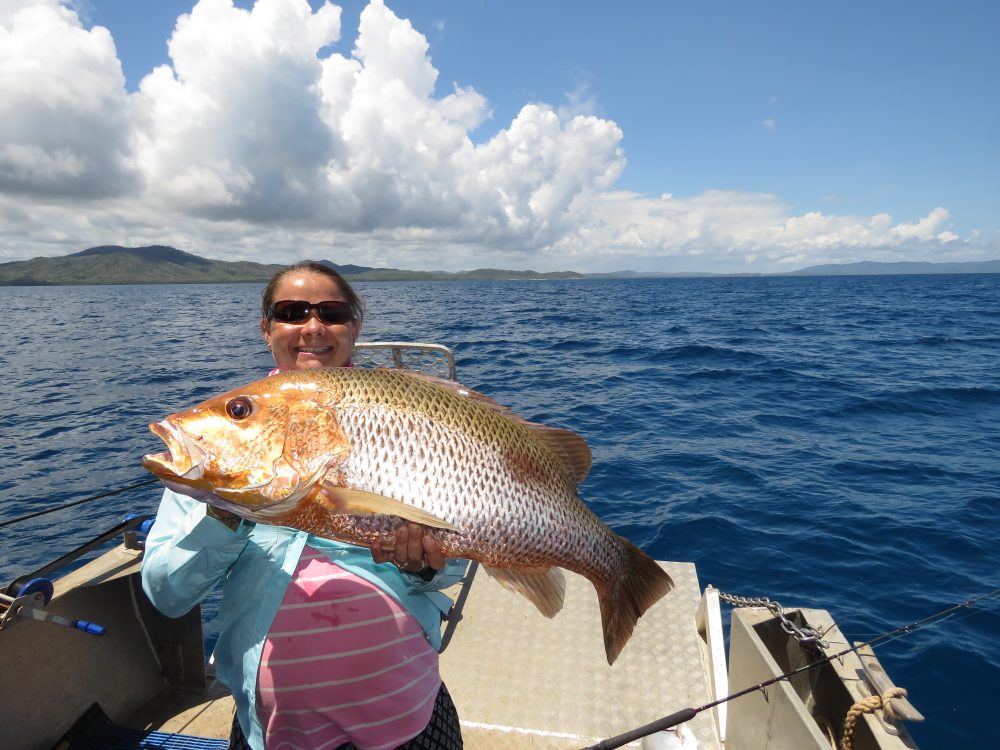 Mia might have had a bun in the oven but she outfished her 3 male companions to land this stonker off Portland Roads on the Cape’s east coast.

Big golden trevally might not have the aura of the highly sought snub nosed dart (permit) but never let anybody tell you that they don’t put up a hard fight. The moment I finally eased its handsome frame into the shallows and grabbed it by the tail felt very gratifying. Sure, you could catch much bigger goldies in greater numbers in lots of other places but sight casting using a fly from the beach was something rare and extra special.

And that, my fishy friends, illustrates the essence of the lure of fly fishing!

Many fishers see fly fishing as the most difficult way possible of catching a fish but, people like myself, who have been doing it for decades, see it as the most relaxing and satisfying form of our sport. Make no bones about it, learning to fly cast is not easy – but so is handling a baitcaster proficiently. Seeking out a proficient caster or attending a flyfishing clinic for instruction is a great way to ease yourself into the regimen.

Don’t be put off by people who try to tell you that a fly fisherman must be able to proficiently cast long distances to catch fish. I’ve seen fish hooked where the cast has barely gone 5 metres! From my experiences with novice clients, there’s nothing like a school of hungry fish to encourage you to become a better caster. 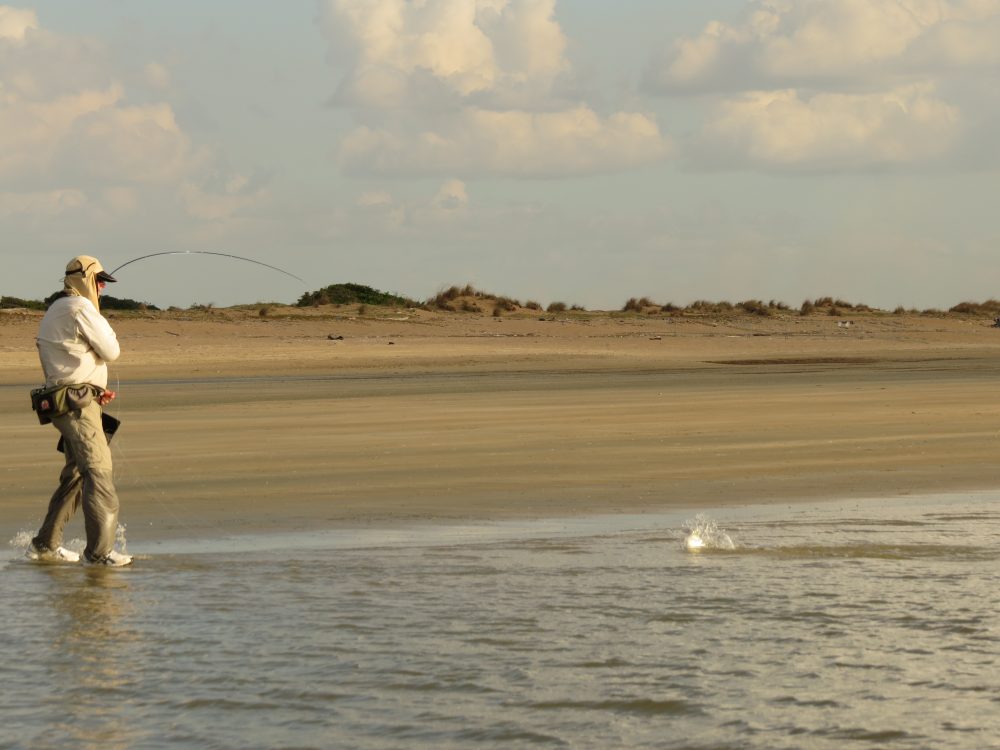 Wayne Kampe visits Mapoon every year with his fly fishing mates and they are rarely disappointed.

One of the other perceived drawbacks of flyfishing, particularly in salt water is that fish are much less receptive to a fly than lures or bait. Again, this is far from reality as I can remember several occasions when I’ve outfished companions using lures 10 to 1 on a fly. In the right conditions, a carefully chosen fly pattern will mimic what’s being eaten perfectly, with appropriate results.

Okay if are you thinking about taking up flyfishing, where do you start? Most Fish and Boat readers would probably be thinking about doing something in salt water, dams or lagoons so a good all-round outfit would be based on a 9 weight line. Such a setup would handle most of the regular species including barra, salmon, Queenfish, trevally, even tuna.

As most fly rods these days are made from carbon fibre, they can be very expensive. I’ve found that the Temple Fork Outfitters (TFO) rods are not only well-made, but economically priced. The BVK series, in particular, is great value for money given its lightness, great casting characteristics and fighting performance. 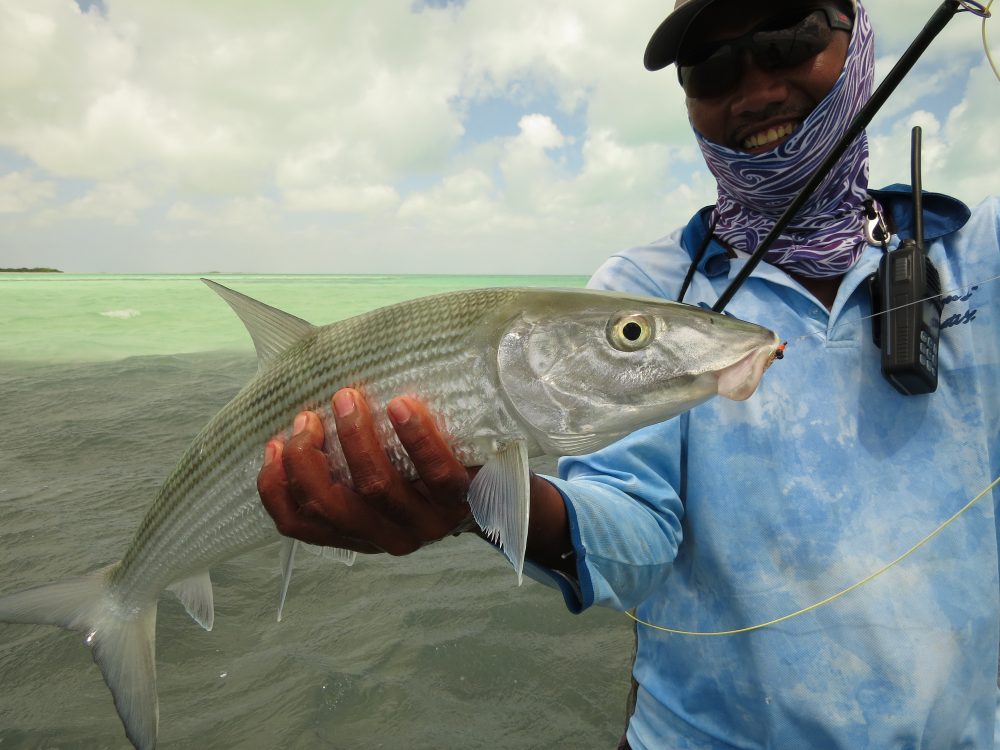 Bonefish are an iconic fly fishing species because they can be sight fished in very shallow water all around the world. This one came from Kiritimati better known as bonefish heaven!

Reels are another topic altogether! Again, there are some frighteningly costly models at the top of the range but there are now a plethora of models at the lower end of the scale that offer superb performance for those starting out. While I can’t recommend any specific brands, I’m sure that staff at the more specialist tackle emporiums can point interested fishers in the right direction.

It’s important that the reel chosen is able to accommodate 300 metres of at least 30 pound (15kg) braided line backing as well as a full (90ft) 9 weight fly line. Personally, I prefer to use 50 pound backing as that further strengthens the link between the backing and line. Losing a line that sometimes costs over $120 because of a connection failure can be hard on the pocket.

The most commonly used flyline is the weight forward intermediate type, designed to sink slowly rather than float. Many of these lines are transparent or have a transparent section at the forward end. This is to make them less visible to any fish in the vicinity.

Better quality flylines these days usually have a loop at one or both ends which allows them to be quickly connected to the backing and leader. The type of design inherent in the last 30 feet of a weight forward line provides the power behind the cast and this can be further enhanced by tapering the leader section that is attached to that end of the flyline. 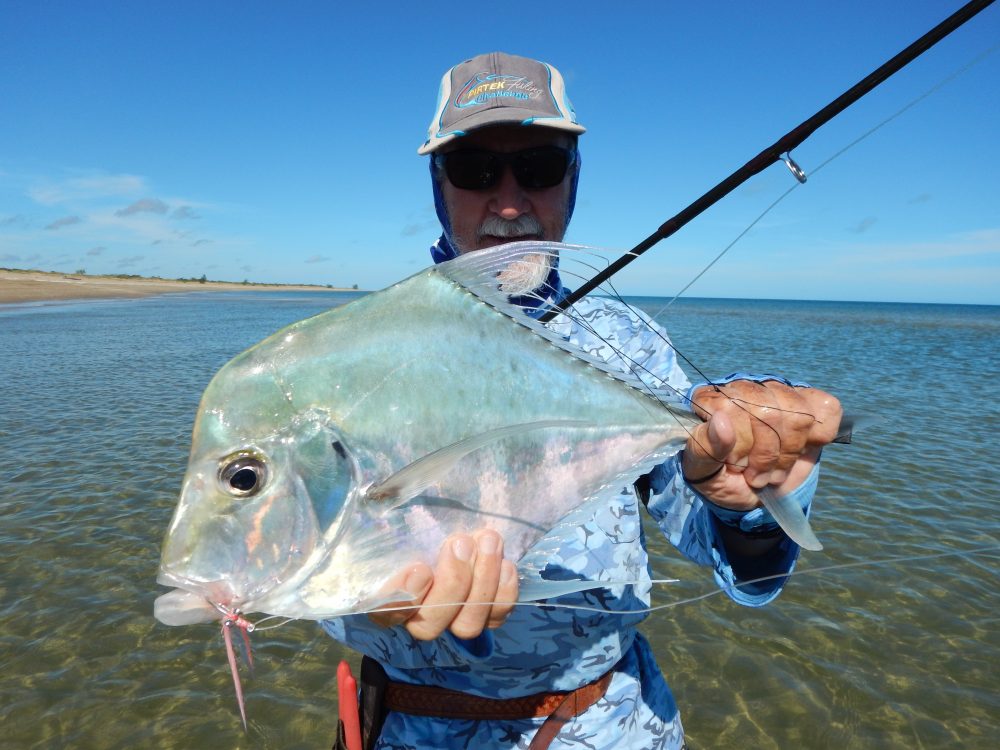 A typical 9 weight leader would consist of 60cm of 30kg hard monofilament followed by 160 cm of 20kg mono, then another 60cm of 15kg. What is termed the tippet comes next, usually 60cm of 6 to 10kg, followed by a short shock tippet of heavier 20 to 30kg mono depending on the species expected. It’s a good idea to tie up a number of leaders and tippets beforehand, using a loop to loop arrangement to facilitate quick changing of species appropriate tippets

There are a huge number of fly patterns around but a few basic ones will get you started. Clousers in various sizes are probably the most versatile so make sure to always have a selection in your box. I’m a great fan of Lefty’s Deceivers and they are my ‘go to’ barra choice. Over the years, I’ve developed my own version based on an example first shown to me by the legendary ‘father of Aussie SWF’ Ron Pearson. 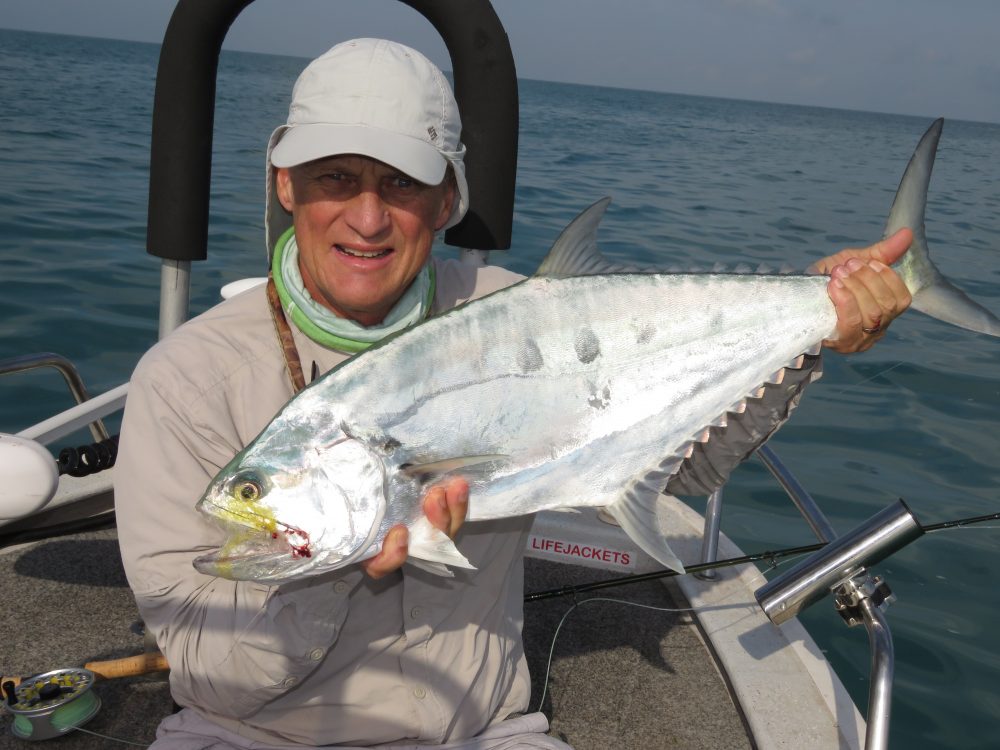 Queenfish are a species that is very receptive to grabbing a fly, particularly if it is retrieved fast. Jon with an average Weipa model.

Many fly fishers get into tying their own flies and that just enhances the experience. There’s nothing quite like catching a trophy fish on one of your hand tied creations. Believe me, I’ve seen some motley ones over the years, particularly from my old mate Wayne Kampe, but I can confirm from firsthand experience that they definitely don’t have to be a showroom examples to catch a big fish.

They say fishing is good for the soul and I can think of no better way to chill out than wandering along the beach casting a fly. Sometimes, it can almost border on a spiritual experience. That may sound trite but I’m sure many other fishers will have felt the same.

It’s well worth the effort to give fly a try!