The Rock in Shoal Bay – By Chris Errity 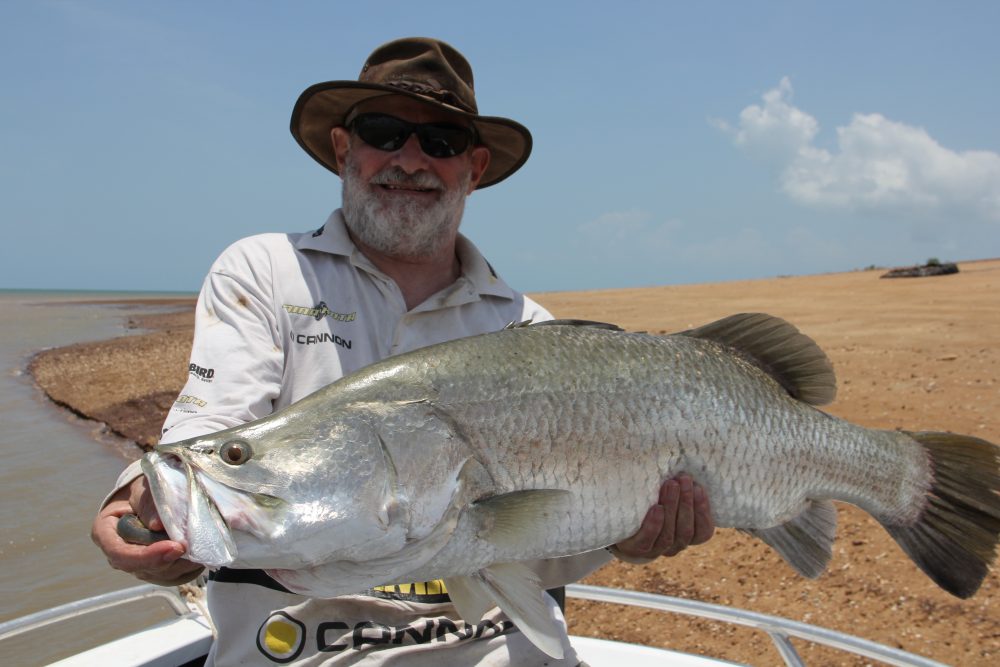 The Rock in Shoal Bay is one of the most famous barra fishing spots close to Darwin where you can almost be guaranteed to land a good barra if you fish the right tides at the right time of the year. It is easily accessed from a public boat ramp at Buffalo creek situated near Lee Point only 10 minutes drive from the northern suburbs. This is a great ramp for accessing the Shoal Bay area. This ramp can only be used when there is at least 3.5 metres of water if you are fishing anywhere other than in Buffalo creek. Once you have launched your boat at this ramp it is only around a 20 minute trip by boat to the rock if the weather is reasonable. 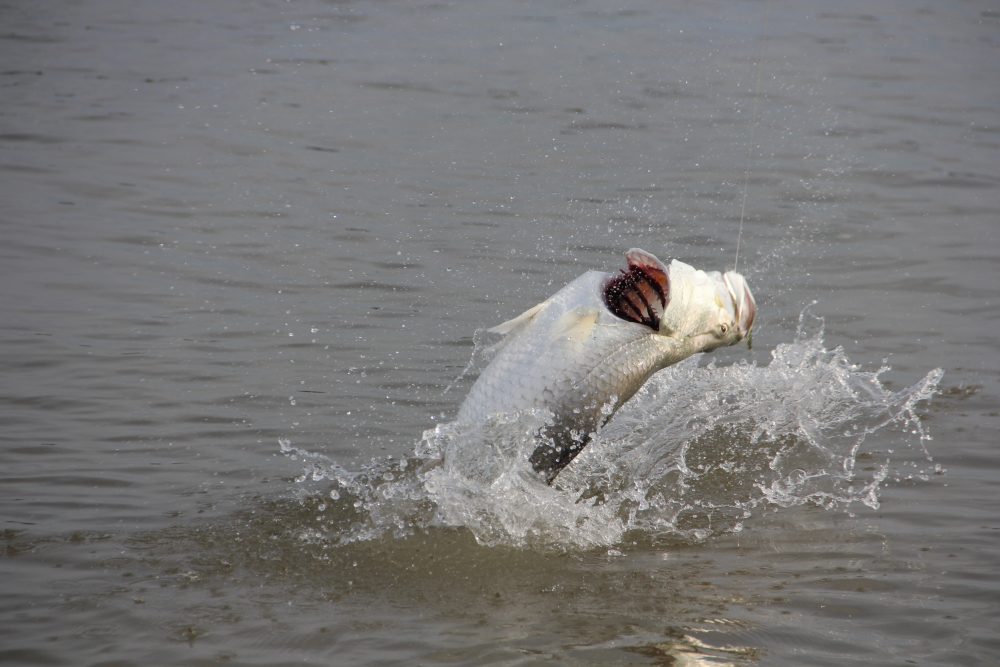 The best time of year to fish the rock for barra is during the build-up to the wet season from September to December. This time of year signals an increase in temperature and humidity, which in turn spurs the barra into action. This is also the time of year that the barra are actively breeding and so greater numbers of fish accumulate in estuarine areas like Shoal Bay. The majority of fish experienced around the rock at this time of year are stud males ranging in size from 85-95 cm. They are great fish in peak condition and they fight accordingly. Of course the larger metre-plus female barra can also be encountered at this time of year.

I have often caught barra in the 90’s that have a totally different body shape. This is a fair indication as to whether or not they are male or female fish. Most barramundi change from male to female around 95cm in size and this can be identified by their body shape most of the time. I have caught barra in their 90’s that are slimmer and can weigh up to 3kg lighter than much more solid fish of the same size that are more likely to be female fish. 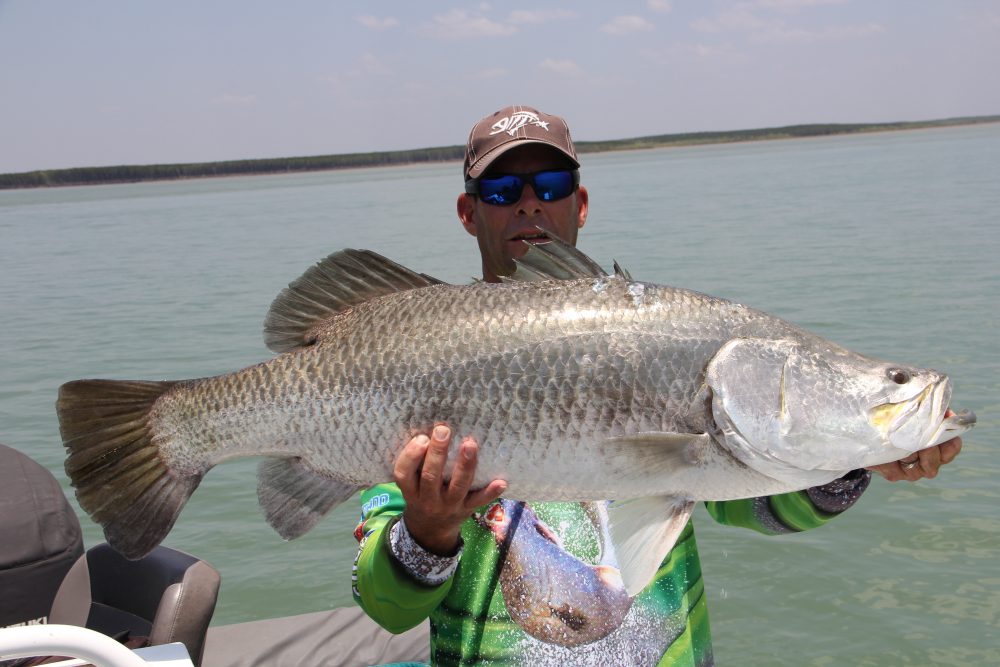 Errity with a solid 102cm barra taken trolling on the incoming tide.

Neap tides or just after the neaps is best for fishing this area. I find the best fishing occurs a few days before the full moon. The best tides to fish at night normally range from a high tide around five metres down to a low of 2.5 metres. The best tides in the day have a little more movement and range from around six metres down to two metres. At night it is better to have clearer water as you are hidden from the fish under darkness yet they can still see your lure, whereas during the day it is more beneficial having slightly dirtier water, which comes with a little more run in the tide.

I personally prefer to fish at night for a number of reasons, the main being it is much cooler at this time of year at night to fish here than in the middle of the day when it can become extremely warm and uncomfortable. It should also be noted that the rock is a place where you need to fish from the high down to the low tide to have plenty enough time to hook a good fish. The rock is just about cut off at low tide and so you need the incoming tide for about two hours before having enough height to be able to leave and return to the Buffalo creek boat ramp. 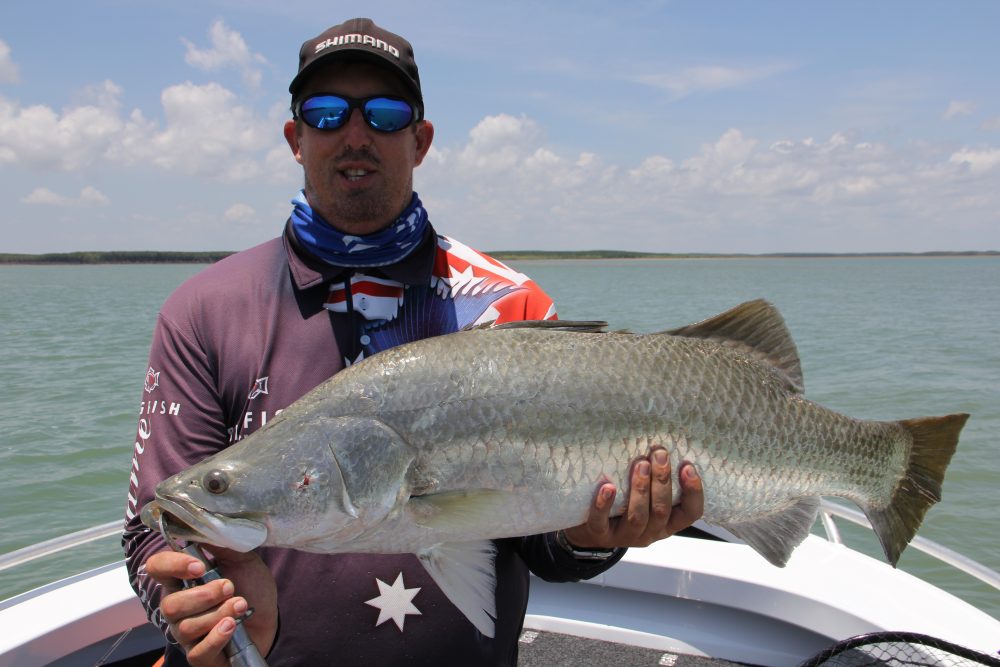 Simon Chapman with a 90 plus barra taken trolling a Reidys big B52.

I personally prefer to cast lures from the rock when fishing this area. Reidys B52 lures in bright colour schemes work best for me with the fluoro green and guns and roses being a couple of my favourites. I have also done extremely well using the Nomad DTX 100 lures in the deeper water around high tide. I like to arrive at the rock just after high tide and anchor my boat in such a way that it does not end up high and dry on the rocks so I can access it at all times during the outgoing tide. I then fish from the Eastern end of the rock when the tide is high and then move along to the western end as the tide drops. Some people prefer to fish from their boats, but I find I receive more strikes fishing land-based from the rock. Many of my strikes have come from in close just before the lure leaves the water, which certainly provides much entertainment.

As the tide recedes and the water becomes much shallower it is often more beneficial to tie on a shallow diving lure like a large Reidys B52. Quite often you will hear large barra feeding in the shallows on the flats at night. Dark coloured fizzers have also worked well for me in these situations when the barra are feeding on the surface in the shallower water. However, even at low tide on the neaps there is plenty enough water surrounding the rock to use deeper diving lures in the deeper pockets around the rock. It should be noted that the major channel that flows out of Hope Inlet past the rock is on the Tree Point side and quite often people will anchor their boats in this deeper channel and catch barra both casting towards the rock and towards Tree Point. 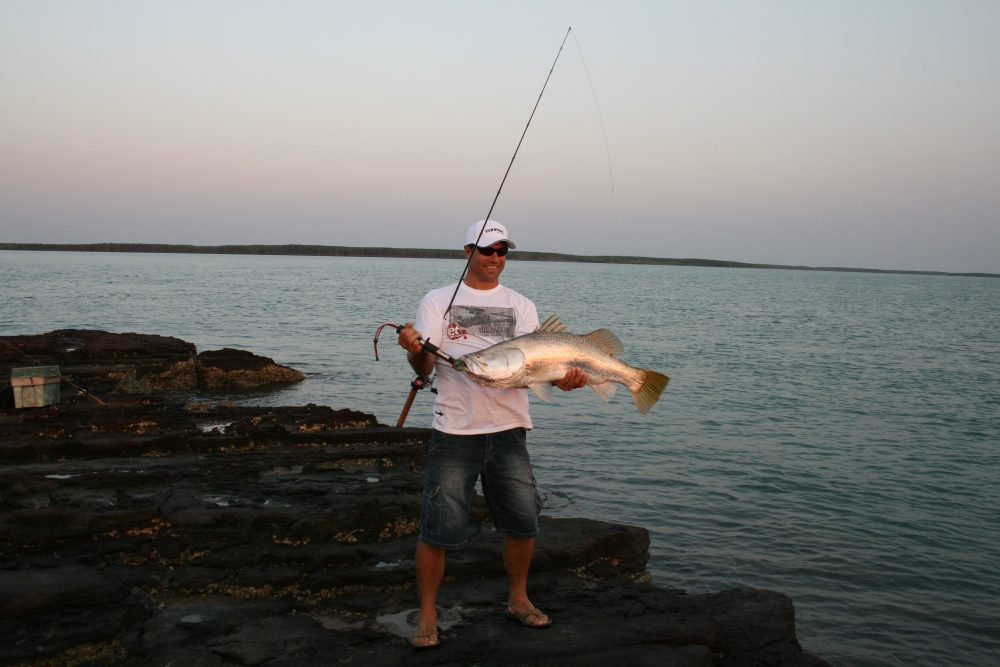 ET with a nice land-based fish.

Just after the high tide as the water starts to run past the rock, the current splits at the eastern end and runs down both sides. This provides a great ambush point for the predatory barra as they float past in the current. I have always experienced my best fishing in the first two hours after the high tide when the water level is higher. As the water recedes and it becomes too shallow at the eastern end I move down towards the western end casting the eddies and deeper holes. I have quite often caught fish right at the western end in a deep hole on low tide or just before the tide turns to run in.

This deep hole can fish quite well near the low tide and on the first of the incoming. Use your sounder to pinpoint where the schools of fish are gathering. I personally use a Humminbird Solix 12, which has extremely clear images especially on the side imaging that I can use to determine where the fish are hanging. This coupled with my Minn Kota 80lb electric motor makes fishing quietly for barra in this area much easier. Reidys fish snak vibes can work particularly well in this situation especially when the fish are sitting right on the bottom. 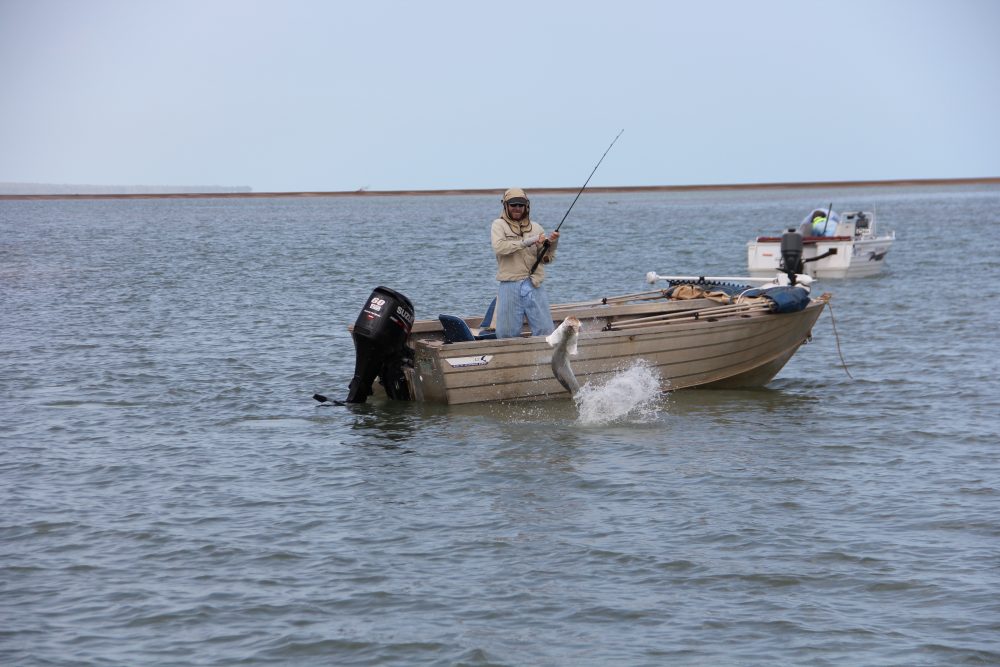 An angler hooked up on a good fish.

Once the tide starts to run in I like to troll the channel on the Tree Point side. The barra seem to gather in this area on the incoming tide and move into Hope Inlet through the deeper water in the channel. I will continue trolling this area until the water becomes high enough to leave and return to the boat ramp. I have also caught some good barra casting on the incoming tide from the rock, but it has not been as productive as trolling.

Some people prefer to live bait the rock for barra and this of course is an extremely effective way of landing a good fish. Mullet can be easily caught in a throw net by travelling over to Tree Point or an adjoining sand bar in your boat. The live mullet work particularly well in the deeper holes around the rock or in the channel on the Tree Point side. Quite often black jewfish are caught using this method as well, particularly during the neap tides. I have also caught a few jewies on lure at the rock casting, which provided an amazing fight in shallow water on the barra gear. This is not a rare occurrence as a few of my mates have also achieved the same feat either trolling or casting. Vibes are particularly effective on jewfish. 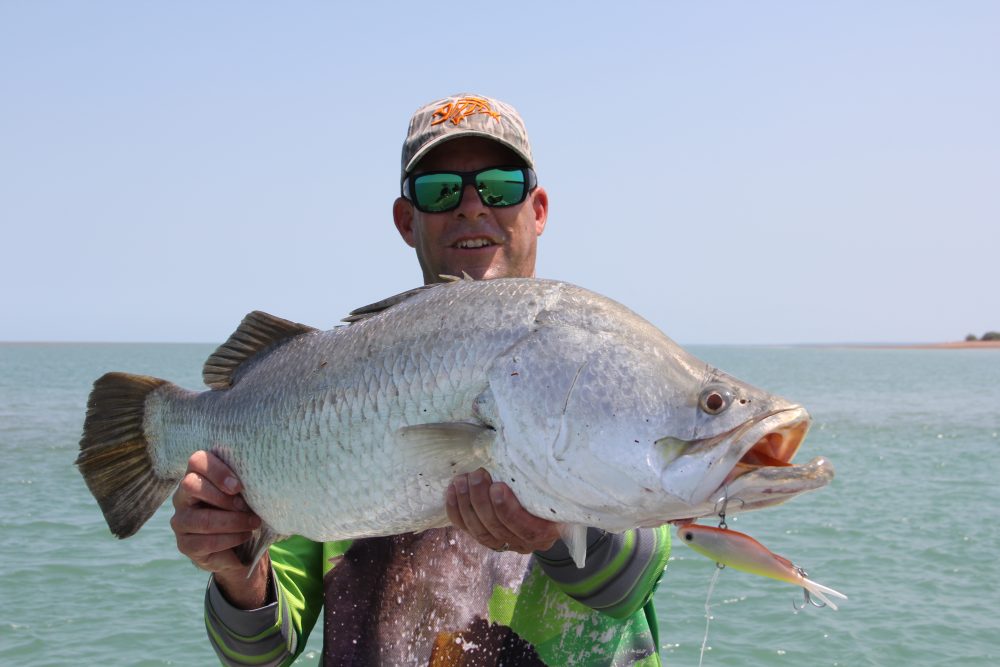 Errity with a 90 plus barra taken on a Reidys fish snak vibe.

The rock is a great place to fish for large barramundi during the build-up months at the end of the year. The fish are of a large average size and are in peak condition.

They are some of the best fighting barra I have ever encountered in the Top End and provide exhilarating action especially when fishing land-based from the rock. Their strikes are explosive and their tactics dirty in and around the oyster covered rocks.

I have had many a night where I have hooked up on numerous fish and returned home empty handed. You need to make sure your gear is tough enough to handle these marauding fish. I use an Abu salty stage KRX 5-9 kilo rod with an Abu Revo Premier bait-caster reel with a strong drag system to crank those big barra in away from the rocks. You should also spool up with heavy braid around 30lb breaking strain and use a heavier leader around 60 lbs. I also beef up the terminal tackle on my lures with BKK hooks and split rings.

Make sure you also take a good landing net to use off the rock. I prefer to use a large Environet as I release most of the barra I catch at the rock. It is also a necessity to take a good pair of shoes when fishing from the rock to avoid injuring yourself on the oysters that abound in the area.

For the sheer size and fighting qualities of the barra that frequent the rock it would be difficult to find a better place around Darwin to target such good sized fish on lures. 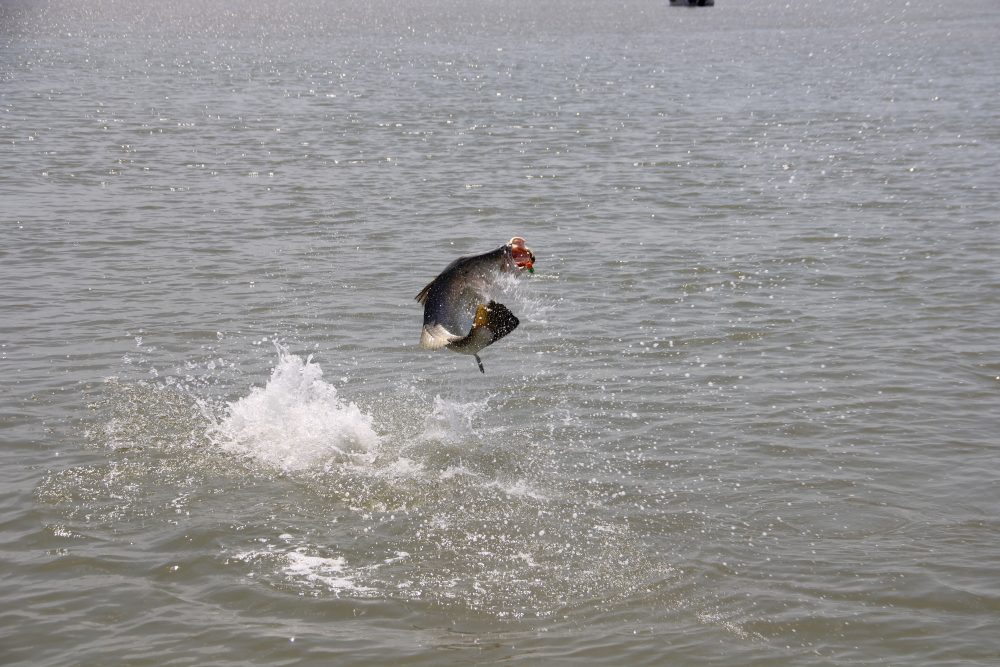 Nothing like a big barra taking to the air.