I’ve long been an advocate for trying out new techniques, whether it be estuary or bluewater. After all, if you’re not trialing different options how are you supposed to learn and grow. Accepting that what you’re doing is the end game or the be all will have you falling behind.

We are forever what I like to call pimping rigs. Some anglers do it and don’t even know they are doing it. Adding flash to a lure, putting some scent on a soft plastic or even using UV jig assist chord. It’s all about taking the average presentation and trying to make it better. At the end of the day the priority is putting fish on the deck so why not experiment to see if you can improve your catch rate.

I’ve been playing around with a few different options of late out on offshore waters when chasing those addictive red fish. You know the red fish, the ones you dream about until your next adventure trying to beat that PB. 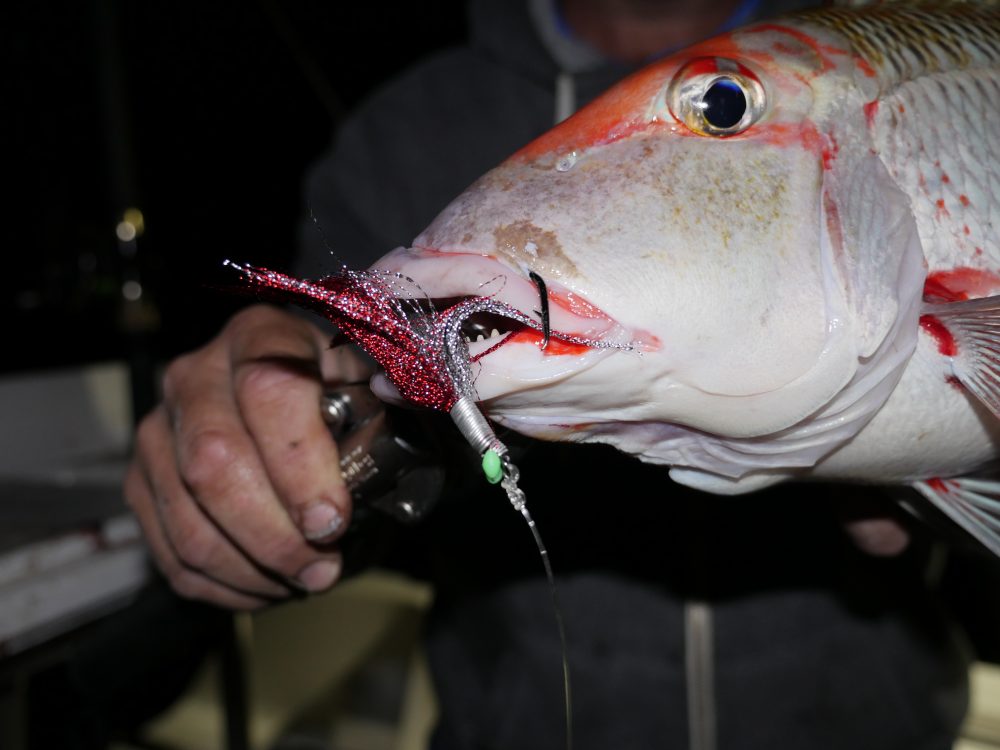 The 7_O recurve was effective in the shallows on red throat. The finer gauge had a high percentage hookup rate. Corner jaw hookups were common

It’s all about putting yourself in the right spot with the right rig, get this equation spot on and wonderful things will happen. Get it wrong and there’s nothing like that gut wrenching feeling of a hook pulling or breaking at the boat and watching that trophy swim back to the depths. I’ve been there, I’ve seen others do it as well including my wife, it’s not a nice feeling I can assure you of that.

In part one of this two part series the first selection of gear I wish to indulge in is the rapid release rigs from Better Tackle. I first noticed these rigs for sale in my local tackle shop not too long ago and as tackle junkies we all love some new stuff. I picked them up and had a look over them and they looked the goods to me. I did screw my nose up a bit when I found out they were made on a circle hook.

I thought to myself “I don’t use circles out at the reef, I want to set that hook and go to war!” It took me a few more days of thinking if they would benefit me. I came up with an idea, bought a few packets and waited for a break in the weather. 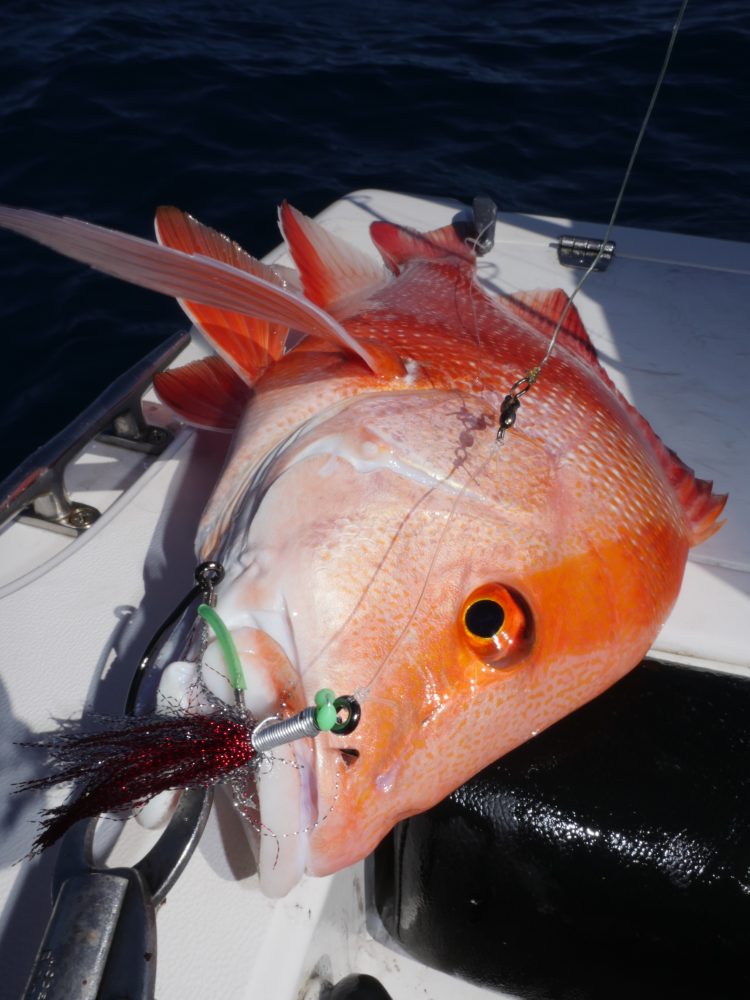 The rapid release rigs would best be described as a type of flasha setup. A two hook paternoster that has fly material tied onto the shank of the hook. There’s a set of lumo eyes which give it a mint finish as well. You then select your favourite bait and add it onto the hook.

While I was waiting for the weather I pulled one of the rigs out to do a check over of the packaging and detail. Each rig comes on its own spool which is a fantastic idea and makes disassembly very easy. There’s a beefy rolling swivel to tie your leader or braid straight to.

Looking over the recurve hooks, the 7/0 looked like the prime rig to run in the shallows for red throat and trout while the 9/0 (which is the one I really liked) looked battle ready for red emperor.

The fly material in my opinion was spot on. I’ve used similar style rigs in the past where the fly material is around six inches or longer. All this seems to do is tangle through the bait once they have been used a few times which leads to frustrating the angler when they want to try and change baits or get rid of the old bait. The rapid release fly material was short, of around three inches long, and thick. 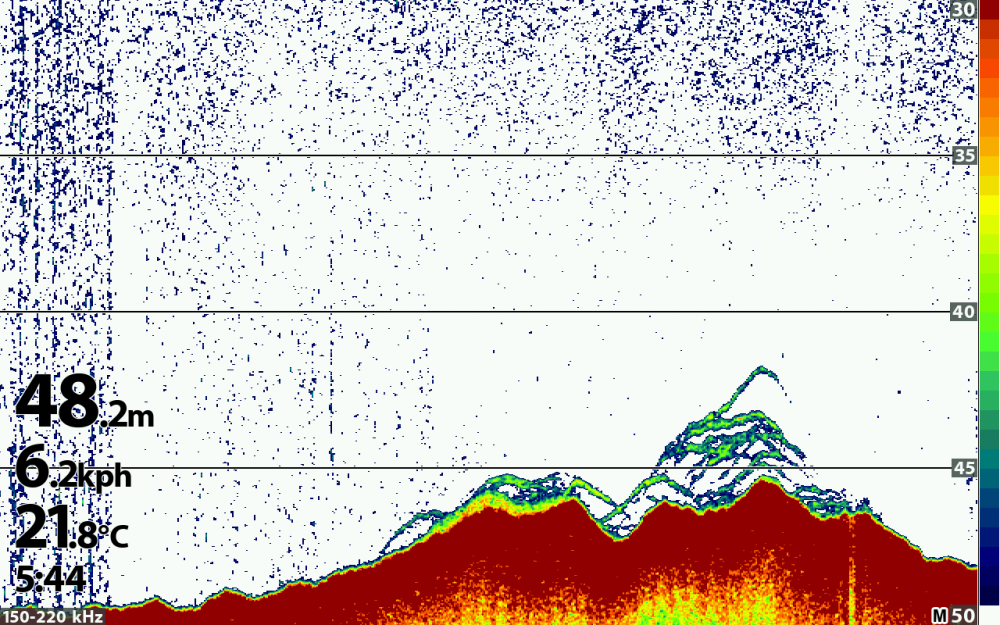 An isolated lump with solid returns on the Humminbird Helix G3N. A great place to test the Rapid Release rigs

The leader material used is of reef fishing calibre, no skimping there. The knots used to connect the hooks and the swivels were all top notch as well. First impression was thumbs up but we all know the biggest question, would they work?

We finally got the break in the weather we wanted on the tides we wanted. How often does that ever happen eh? I had my Dad and good mate Dan Baker on board. We were heading wide, out to where the big nasties lived. It was an area I hadn’t visited for over 18 months. Anticipation was high, sleep the night before non-existent.

The idea I really wanted to try was running two rods. I’m a boat hog, I like a full side so I can try multiple things at once. Running one bait rod with the rapid release paternoster which I could sit in the rod holder if need be and one jigging rod. I wanted to trial the rod holder setting the hook if I was busy on the jig rod. Only time would tell.

We started the trip well with a few fish for the esky coming in on the jigs and also on the rapid release but they were hardly photo worthy. We made our way to one of the spots I had caught good reds off in the past just as the sun was making its way towards the horizon in the late afternoon. The timing just felt right. 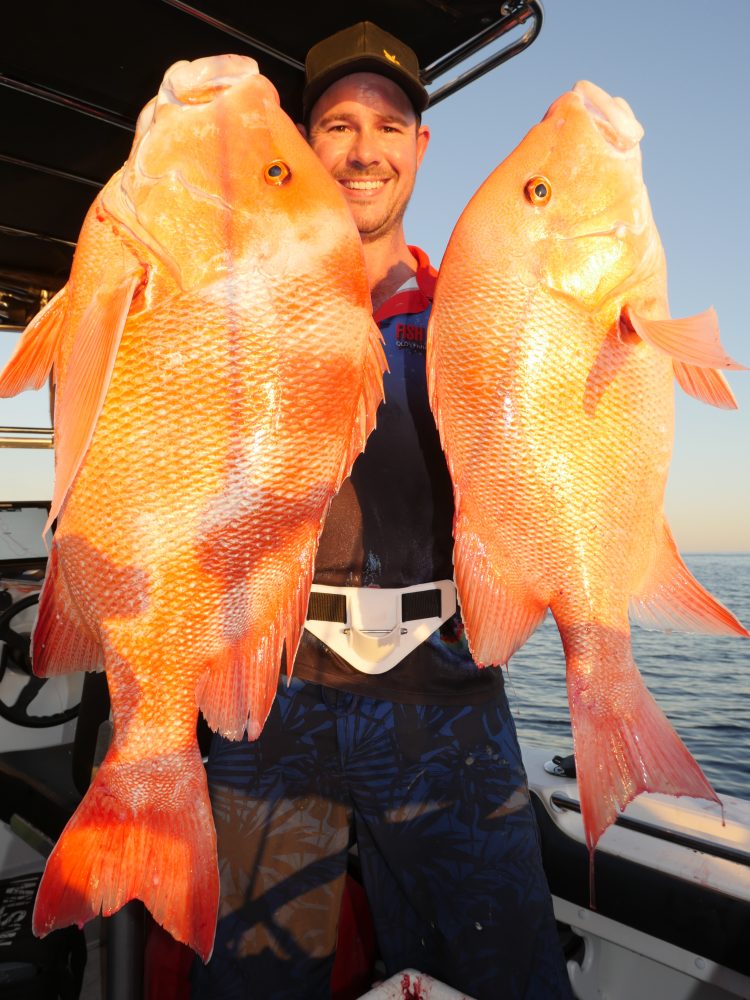 The Humminbird Helix lit up on first inspection and I set up a drift line. I wised the crew up that everything looked mint. Dad was the first to hookup solid, prime head shakes had us calling red early. Dad swung a good red over the side and I felt that tell tale ‘empy suck’ so I fed out a bit of line. Usually this is the part where I set the rod to the sky but using circle style hooks only calls for you to take the weight and let the hook do the rest.

I felt the recurve find home and the Venom rod slammed down hard. It was hectic from the start and it played up all the way to the surface. There’s nothing like watching a big red cut its way through the deep blue on the way to the top. Dan had the net ready and scooped it up. It was a quality red which lay on the deck next to my old mans. A great start to the trip and a red that would be hard to top. The red was pinned in the corner of the jaw and had been taken on the 9/0 with a squid head.

The rest of the trip was spent catching a range of reef species. Some school sized reds, red throat sweetlip and Maori cod just to name a few. For the entire trip I went through two rigs. The first one only got destroyed because I hooked about a six foot whaler and had to cut it off. The second rig caught many fish and was still in good shape at the end of the trip and is more than capable of being used again.

Did the idea of using the rod holder to catch fish work? You bet it did. If I had the jig rod and noticed the bait rod get a reasonable bite all I did was lean over and wind the handle to help with the hook set. Definitely a technique that I will continue to use into the future. 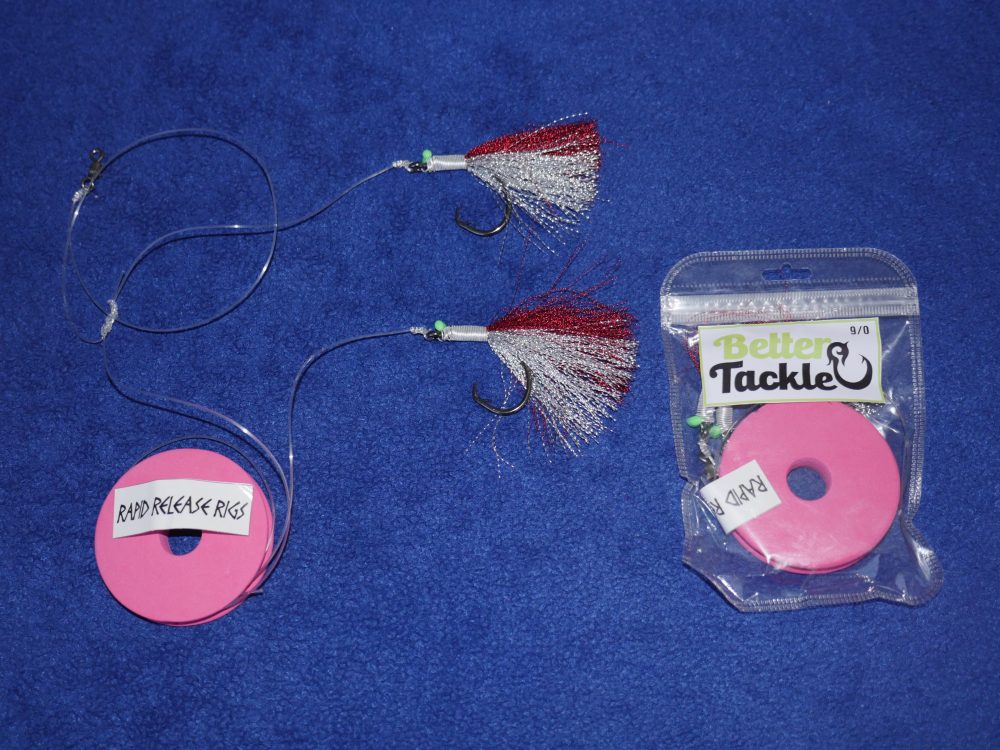 Since that trip I have caught up with Josh from Better Tackle to have a chat about the gear. You can tell a lot about a company by talking to one of the owners. There was so much passion about the gear in the words he spoke. A continuing drive to perfect each idea to make it better for the average angler.

The only down side to the chat is I found out like many other businesses COVID has effected their supply and demand. If you want to know more about Better Tackle than you can jump on their website at www.bettertackle.com or you can search them on Facebook. I personally think that you will hear more about Better Tackle into the future so make sure to keep an eye out.