The Silver Lining – By Ben Keen 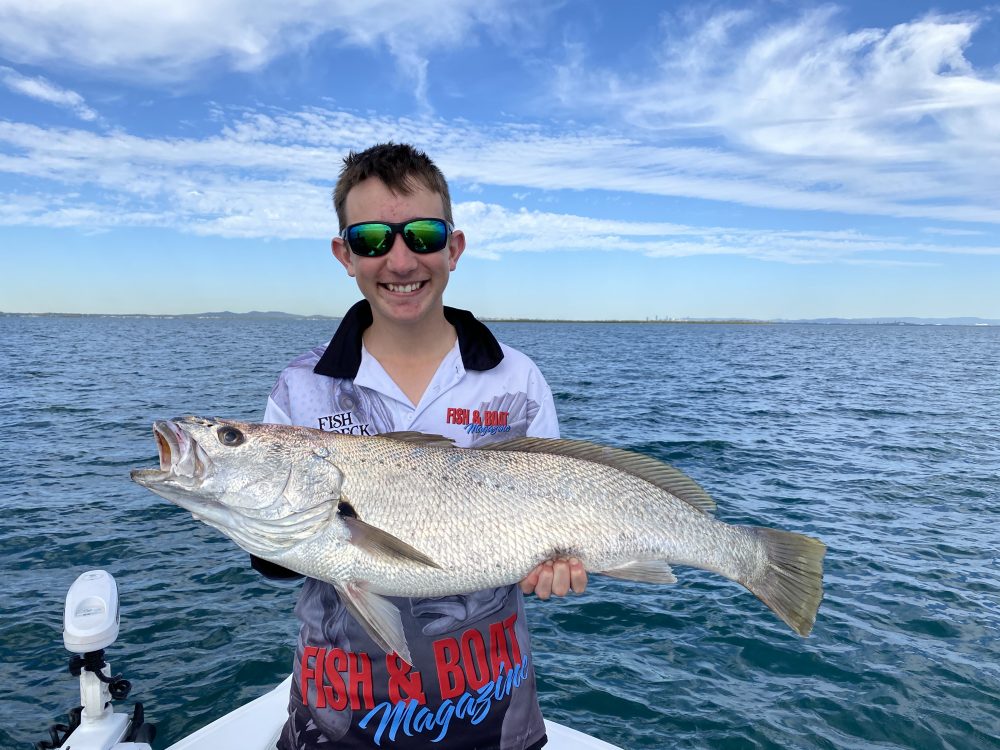 My little lad, Bob, is well on the way to becoming the greatest fisho this wonderful state has ever seen. As you’d expect, at only four-years-old, we don’t go too far. He loves to catch whiting and squid on the “Taddy 200” and if the weather is mint, we sometimes go a bit further and knock over a couple of school mackerel.

At home Bob is always front and centre when prepping gear and cleaning boats. This is mostly helpful, but sometimes a challenge when he’s let loose in the “man cave”. Let’s just say, you haven’t lived until you’ve tried tying knots with a toddler launching casting plugs over your head.

The other day, I was in the throes of completing a line to leader knot when my little mate “Novak” decided to do some target practice. Unfortunately, I must have looked a bit too much like a line judge and next minute, whack… a casting plug right in the forehead. His older brother Joe thought it was hilarious, as did he. 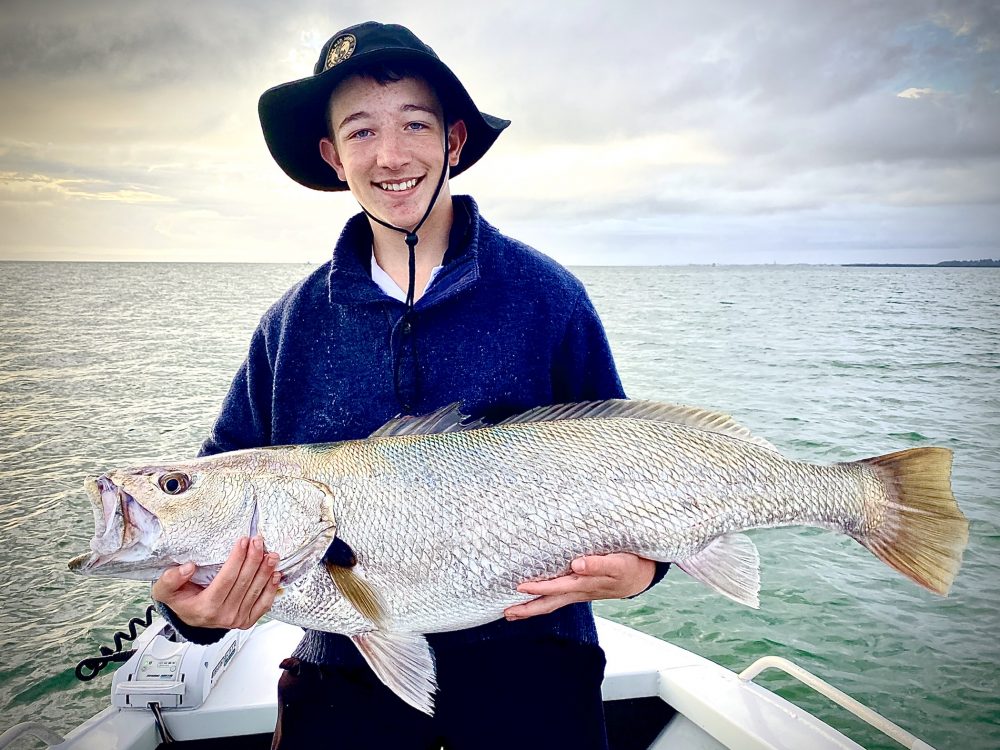 Joe Keen with 117cms of SEQ mulloway – caught in 7 metres of water.

The biggest loser in the whole incident was the knot that went from near completed perfection to a total shambles. I never mess around with knots, they are either done perfectly or not done at all so it was quickly cut off and the process started again.

He was still laughing but managed to acknowledge my address.

“Chuck us the 60lb leader mate,” I continued.

“We’re are all out dad, do you want a new roll?” He replied.

“Yes please mate,”. I paused for a moment to consider the fact that we were about to open our third roll of 60lb leader in 5 months – the kind of KPI most fishos would be happy with.

“I wonder what fish this roll will deliver,” he said as he returned with 80 metres of Shimano Tiagra.

I continued tying knots. My hands were sore. My right index finger looked like a butchers bin. The braid had been wearing it down over the last few months. I suspect many reading this will know the feeling.

By the time I finished rigging for the next day’s session, Bob had gone inside and Joe had sat down next to the boat with a copy Gregory’s Fishing Guide. Not uncommon for Joe, I doubt there’d be a more studious 14 year-old fisho in the country. 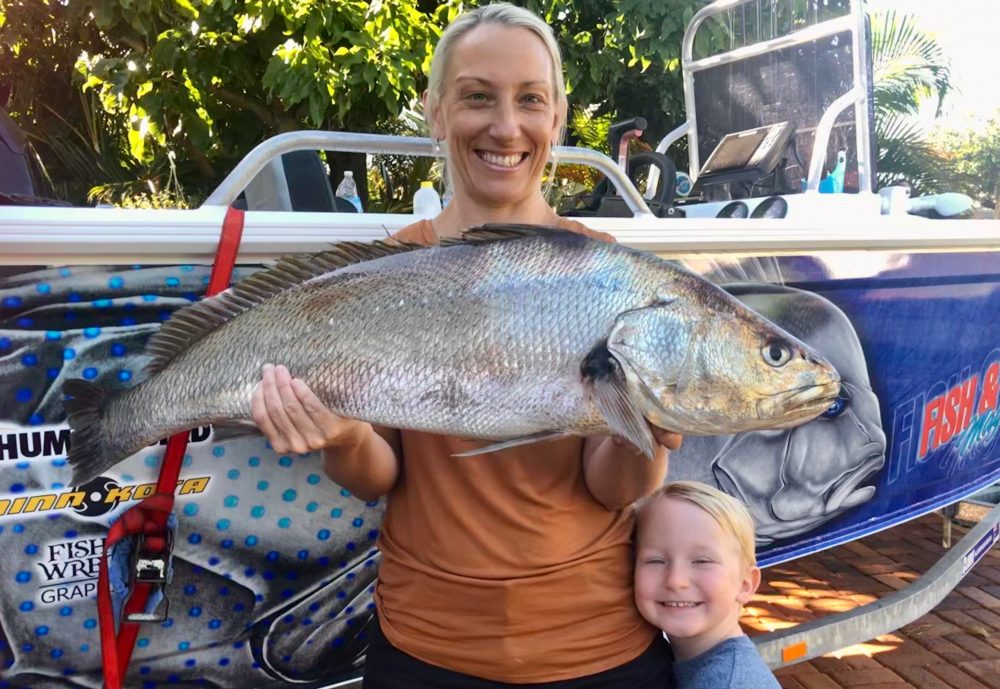 Rebecca (& Bob) Keen with a 95cm (average size) mulloway. This one fed the family for a few nights – delicious battered!

“What are you reading up on mate,” I asked.

The response was slow, he was lost in the literature.

Eventually, he spoke up. “Hey dad, what time is dead-low tomorrow?”

His response was succinct, I had given him the information he wanted to hear.

Within hours, we would consider that statement to be the irrefutable truth of mulloway fishing.

In context, you’d be the exception if 2020’s super-virus (I won’t call it by name, I can’t even bring myself to type it) hadn’t significantly disrupted your life in some way. It’s been a very tough year for many people.

Personally, I am so grateful that amongst the chaos of the year, I have been able to throw myself into fishing. It has been a real period of discovery for myself and my son Joe.  When not on the water we have researched, read, refined, rigged, repaired… the list goes on.  When we have been on the water, we have truly felt the benefits of a more considered approach with some amazing fish hitting the deck.

In reflection, I would say pre-covid, my approach had been quite narrow-minded. I was gripped with the kind of preconceptions time-poor people settle for. With the benefit of a “less demanding schedule”, I was able to experiment, try different styles and be more flexible in my approach. So in short, it hasn’t been all bad – far from it, the “silver lining” some might say. 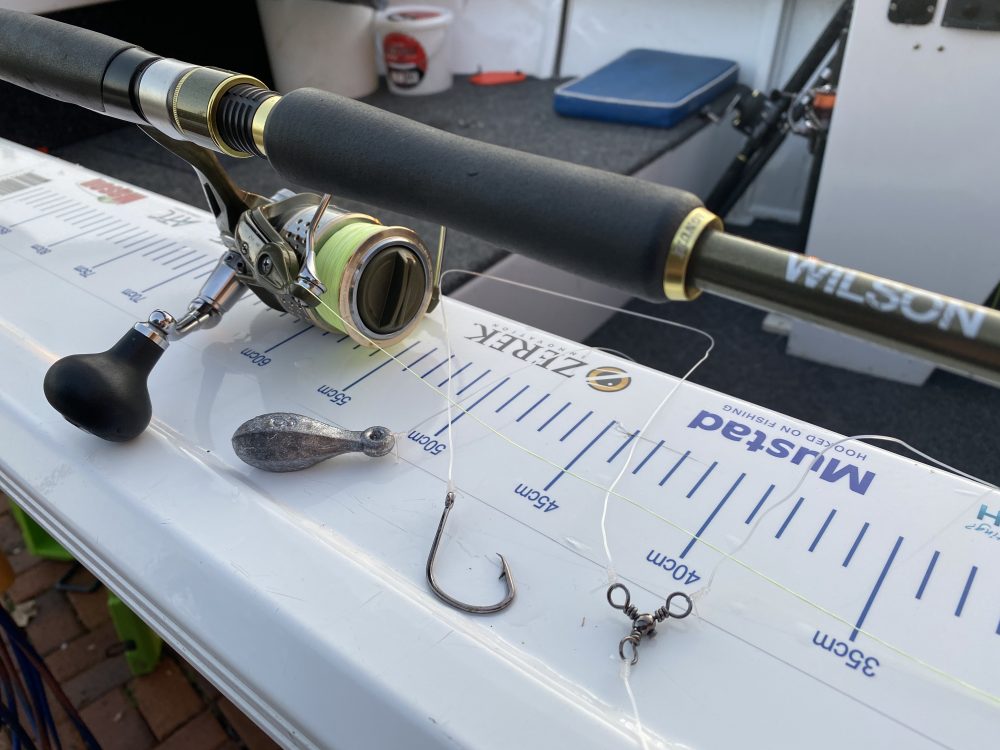 It goes without saying that inshore anglers in SEQ hold mulloway in high regard. Over recent years, I have been lucky enough to fish beside anglers proficient in their capture. The likes of Jamal Kanj who is a plastic aficionado and Peter Kaye who loves launching micro jigs have both left a lasting impression on me with their differing approaches.

Whilst no approach should be considered superior, my efforts have mostly focused on livies and it’s for a very simple reason. On nearly all occasions I have found mulloway in the Bay, they have been chasing down large schools of bait. Obviously, the elementary goal for any fisho is to match the hatch so with that in mind, when I target mulloway, I use livies! Following are a few tips that you might find useful if this sounds like the kind of mayhem you’d like to finish the year with.

A long time ago, I decided to paint the interior and exterior of my house. It was a project I stupidly undertook over the summer months but nevertheless, it turned out OK. A mate of mine who is a painter gave me some advice before I started that I have since applied to many facets of my life; “The quality of the finish will be dependent on the preparation.”

When livie fishing for mulloway, there are two areas of preparation that are of critical importance. Firstly, you need the right gear. My livie set-ups are 60lb paternoster rigs consisting of a single 6/0 hook with a size 2 or 3 sinker depending on depth – very simple stuff. In terms of hooks, an octopus is usually my go-to.

Combo wise, I tend to use a 4000 size spin reel with 30lb or 40lb braid on a 10-25lb rod. There is no need to break the bank, I would suggest going for a middle of the road combo. I use a lot of Shimano gear but also have a well used ATC reel that gets the job done. I have found the ATC reels to be very affordable and seemingly indestructible so I would recommend having a look at those if you are in the market for a mulloway combo. 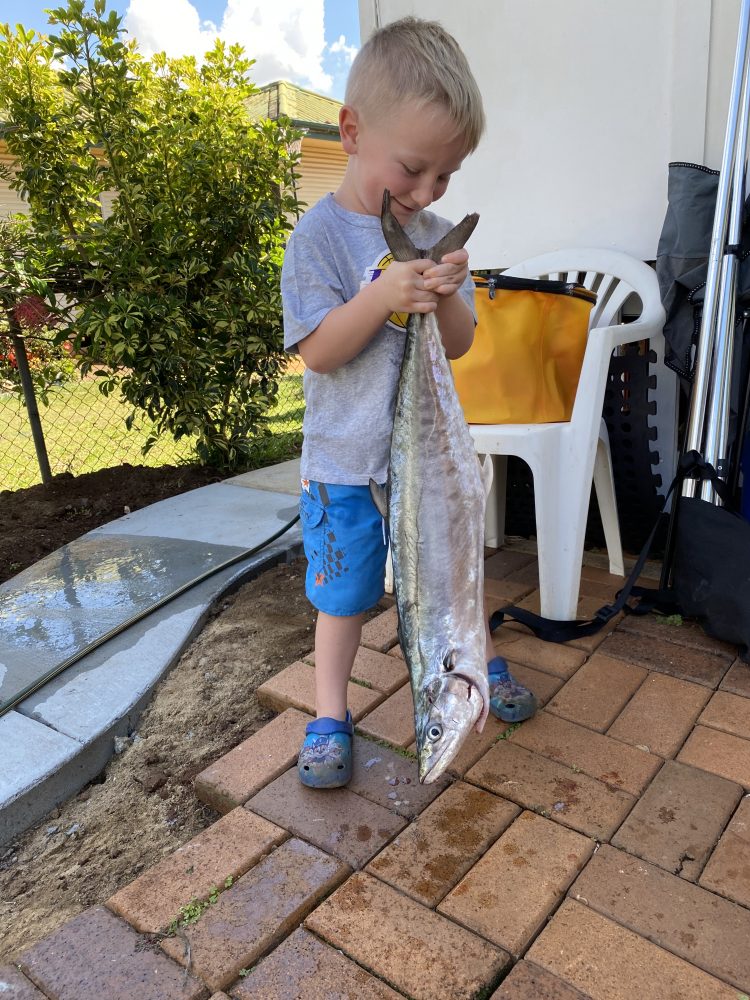 Whilst delicious, school mackerel like this 80cm model will make bait collection in deeper water difficult – get your livies as shallow as possible.

Secondly, if possible livies should be collected ahead of time. Whilst you will find mulloway gorging on good showings of bait, you will encounter a couple of issues if you choose to obtain livies from said schools. Most of the time, mackerel are in the mix. If you have ever tried to pull up a stringer of livies from 20 metres with school mackerel about, you will know that Sabiki rigs tend to get obliterated at an alarming rate. So if possible, get out the afternoon before to collect your bait. Also, when you find the mulloway, the bite window can be very short so having a tank full of healthy livies ready to roll is super important.

There’s a time and place

One of the biggest issues when targeting mulloway in the bay is their transience, they tend to bounce all over the place. Ideally, it is preferential to locate the large schools of bait that roam the bay as the mulloway won’t be far behind. However, the obvious issue with this kind of fishing is that it requires patience.

Locating bait schools can take some time but I generally start by working the edges of the artificials, particularly “Harry’s”. Once I find a reasonable bait showing, I deploy my livies and hang on, even if I can’t clearly identify mulloway on the sounder.

Once located, mulloway can move very quickly, so often, by the time you get a livie on the ground, the school is already on the move. The trick is to then stay with the school and continue to work it. This is the part of the equation where a Minn Kota will prove its worth.

As alluded to in the introduction of this article, mulloway movement will also be increased or decreased depending on the stage of the tide. Many fishos I have met over the years prefer to chase mulloway at the bottom of the tide when the movement has stopped. This tidal phase sees the mulloway slow to some degree making it much easier to stay with them. 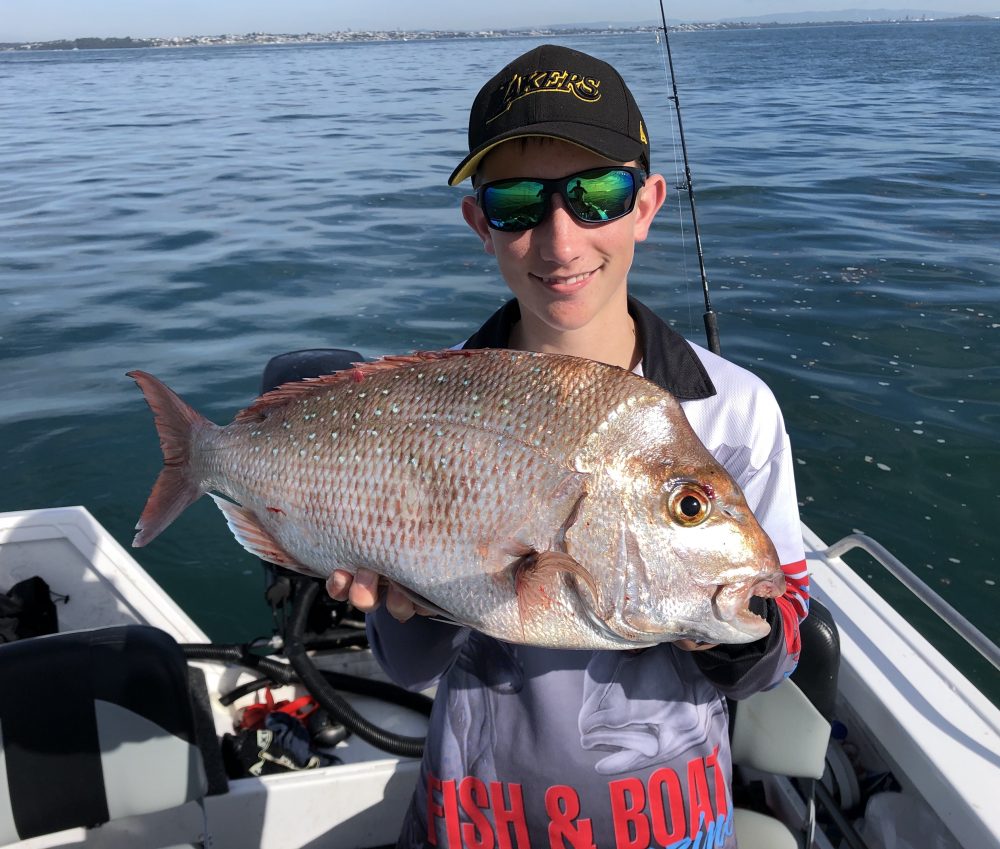 Common mulloway by-catch, and no complaints here! Snapper are never far from the action and Joe was very happy with 62cm model.

When it all comes together

We were at Manly Boat Ramp twenty minutes before first light. I had a feeling it was going to be a good session. We were well prepared. We motored to the first spot and deployed our livies as the sun began to rise.

The sounder was lit up with bait and arches, it was exactly the kind of screen all fishos hope for in the golden hour.

Joe’s rod went off within about 30 seconds. However, it was clear a school mackerel would be coming boat side.

As I slid the net under his fish, my rod went right angles in one of the most violent bait swipes I have ever seen. My rig was destroyed.

Joe re-baited and was quickly back in the water. Within 30 seconds, the battle began. The signature low torque run of a big mulloway had me excited but equally nervous as