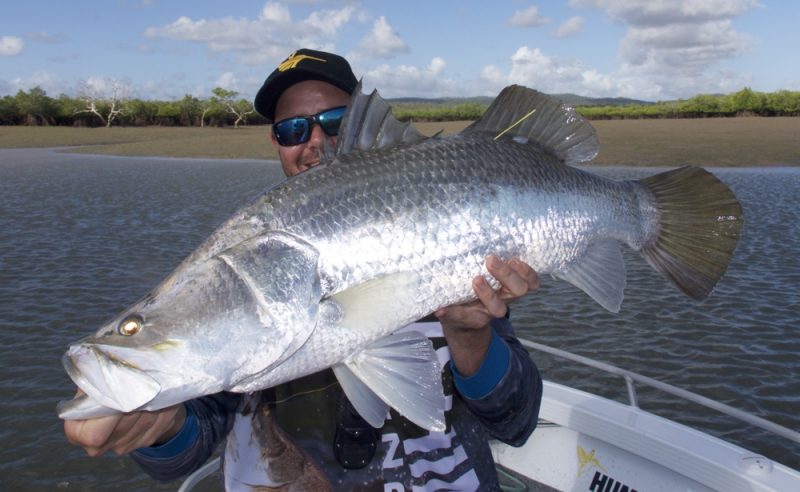 Last week we discussed transducer placement and the ability to read at speed while fishing your favourite creeks to unlock hidden treasures. What about if you don’t have that luxury or what about if you can only view detail on your sounder whilst idling along?

Well my friends I’m here to tell you that all is not lost, and hope hasn’t deserted you like the state of origin crown did to Queenslanders. I will need you fellow anglers to take a step back though, a step back to breathe, a step back to just relax and unwind. The most important piece of hardware you’re going to need for this exercise is a pair of ear phones. Wireless or hardwired is completely up to the individual.

Has Boony lost his mind? Are we about to indulge in some sort of confused meditation? Absolutely not. The art to an undiscovered oasis can purely lay with the ability to kick back and chill the heck out. The earphones are for the music that takes you to your happy place. Bieber, Kiss, Katie Perry it really doesn’t matter what genre as long as it’s what relaxes the mind. 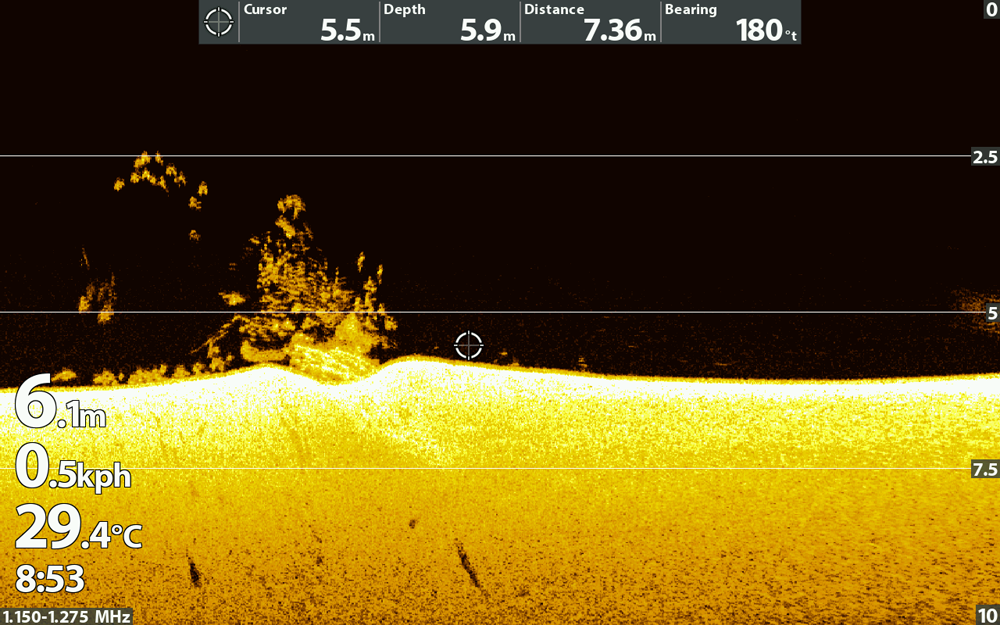 The next most important piece of hardware you’re going to need is a good quality side imaging sounder. Why does the previous sentence keep appearing in most articles? Unless you’ve been living under a rock, technology is high on the list of piscatorial importance. That sounder screen can be the difference from pulling a rod out or moving on to the next area. It’s fishing basics 101 “the ability to understand what the echo sounder is showing you”.

Different anglers will see different detail from the same screenshot. As long as you have an understanding of what fish and structure look like you’ll be on the right track. Following different Facebook pages that allow you to view screenshots and the details is a great start. 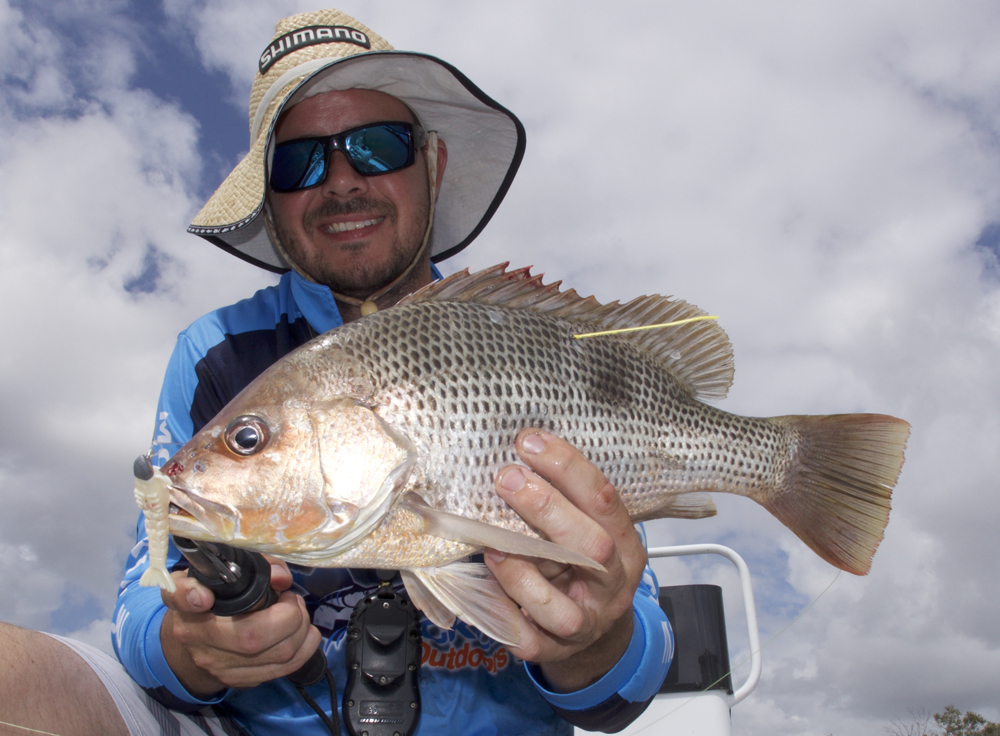 There are a few different sounder online courses that are available if you are struggling. What better way to learn than to have a guide to bounce questions off. I know Johnny Mitchell’s course is getting some really good feedback. Just search Johnny Mitchell sounder course and it should lead you where you need to go.

Once you’ve got that sounder dialed in, then it’s a matter of sussing out likely areas. Google earth is a great place to start. The free version will have old maps but they are still full of valuable information. I’ve scanned just about every inch of coastline and estuary throughout our Rockhampton NFZ. I’ve also visited just about every creek at some point. There’s nothing like arriving at a new area ready to search, the unknown is very exciting.

Water clarity is another tip high on the priority list, especially for lure casting. It’s not impossible to catch fish in dirty water, but past notes has water clarity high on the list of importance when it comes to results. 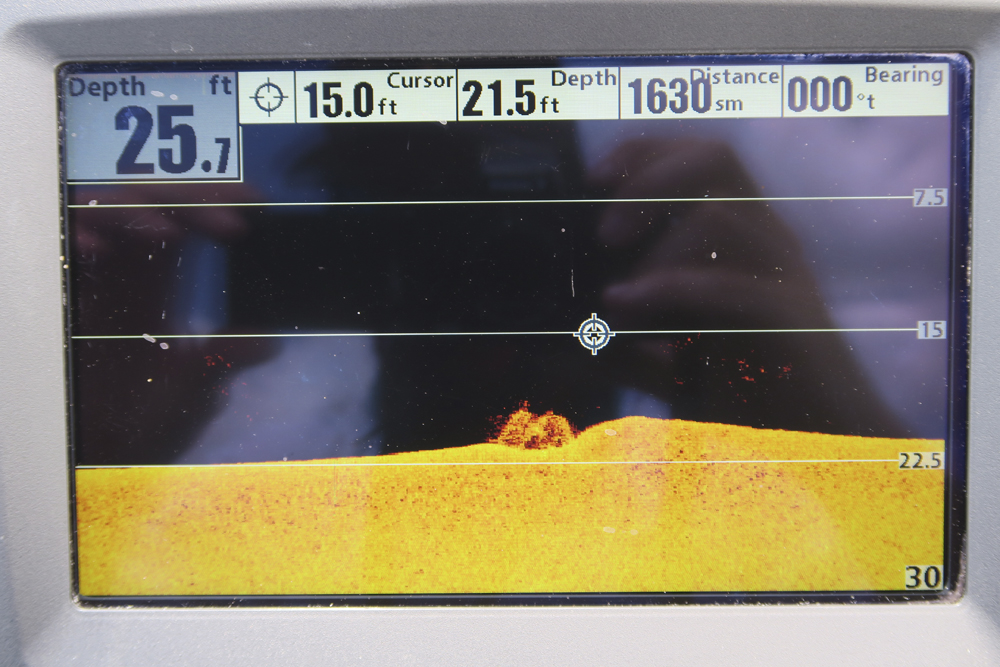 On the spring tides (full and new moons) water movement is high and turbidity levels increase. Add a bit of rough weather and water clarity can resemble that of chocolate milk shake due to the fact that most of our creeks here are mud based.

The closer you get to the neaps (quarter moons) the better the water quality. Clean estuarine water gets that green look to it and you can usually see your lure down 1-2 feet under the surface. A guide up in Arnhem Land once told me that as long as you can look over the back of the boat and see your prop in the water then that’s good enough.

It can be a matter of visiting areas and recording conditions. Some areas will clean up very quickly and others it will take until a day or two after the neaps to start to clear. The more time spent on the water observing, the better understanding you will get about your local area. 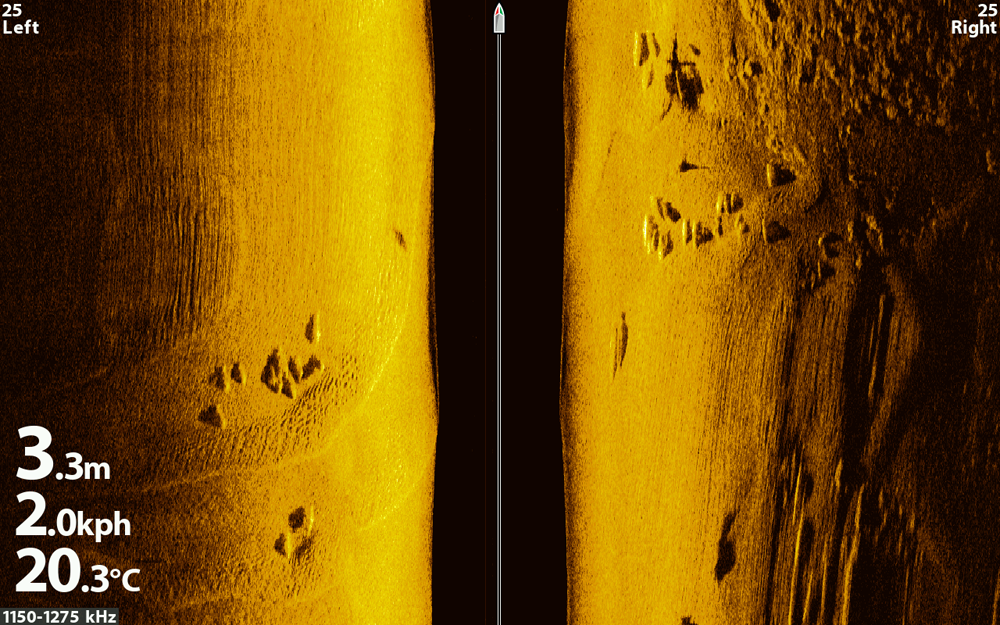 Once you have locked in some places to search, don’t try and do too much in the one day. You are much better off sticking with one or two creeks and searching them thoroughly. I will generally start at the mouth of an estuary, have a look around outside the mouth and then pick a side and start scanning my way in along the bank. Set the side imaging to about 20 meters either side and sit about that far out off the bank.

I’ll run my sounder on side image/down image split screen, you just never know what might travel directly under the boat. Now it’s time to kick back, put the tunes on and watch that sounder screen.

I’ll give the creek a good search on both sides and in the middle for the run out then do the same on the run in. High tide I will head into places that were dry at low tide. It’s amazing to see structure well out of the water at low tide and then fish rich around the high. It’s a tedious task but when you’re addicted to the hunt it all seems worth it when you find something of interest.

I can recall a trip out to Port Alma around 4-5 years ago. I was running solo as it was a dedicated search day and not many people understand the concept of putting the time in to search out new areas. I had already searched a small creek for the run out with little to show for. I started my next estuary on the bottom of the tide.

I was only running a Humminbird 998 back then, but they still showed incredible detail. I picked up something unusual on the side imaging. I marked it and swung around for a closer look. It looked like part of an old wreck. There were no rock bars nearby and this piece of structure was out towards the middle of the creek all by itself.

Once I pin pointed the mark, I set up to have a few casts. I was pleased to see some small fingermark coming over the side, and when I mean small I mean like 25-30cm. I was expecting more from my new found lump but it was great to see juvenile fingers about in numbers.

Since that day, I have revisited that mark quite a few times, and every time I pull in it seems to have more and more life on it. I’ve pulled just about every creek species off it including fingermark, grunter, black jew, salmon, cod and more. Another fun filled fact about this unique little spot is that each year the average size of fingermark keeps improving. A couple of years later after I originally found it, the average fingermark was just on legal size at around 35cm. Last year most of the fish were 40-45cm. 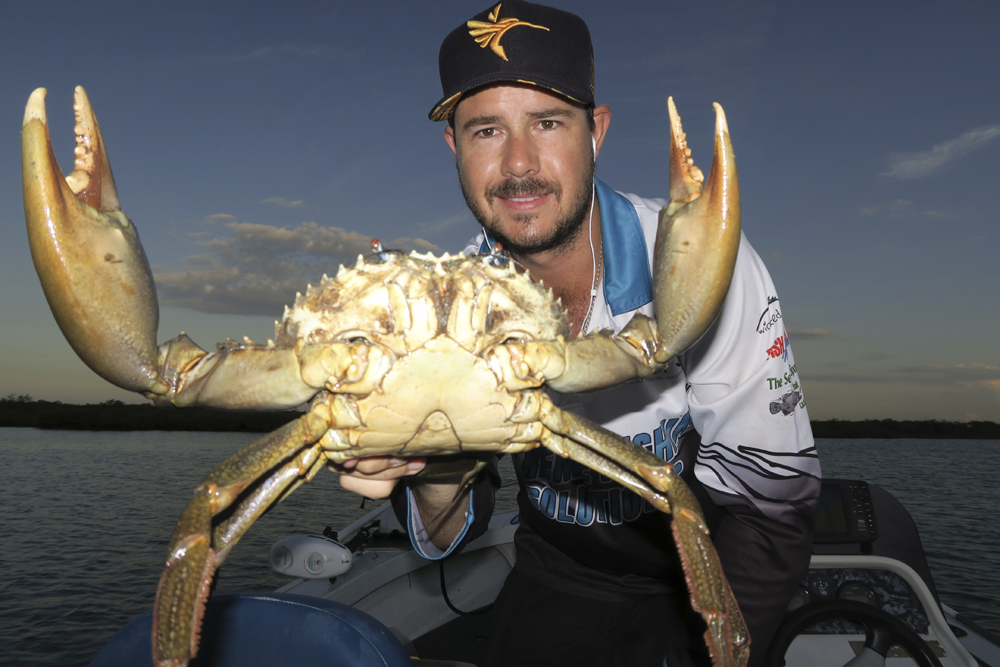 I’ve never kept a fingermark off this spot and have tagged quite a few. I’ve also never taken anyone else there either. It’s a spot that could be decimated quickly if it fell into the wrong hands.

It’s not a world class find but it’s one of those spots you can always guarantee you’ll catch some quality fish if you get the tide timing right.

My biggest saltwater barra came from using this same searching technique around the same time I found fingermark lump. I found a submerged snag in a smaller creek away from main traffic areas. The spot was holding good numbers of barra and from the returns I was getting, there were some big ones amongst them.

I found this spot on the run out. I cast the water to foam for not even a sniff. It was pretty obvious that the timing wasn’t right as is generally the case with newly discovered spots. I kept searching and came back to this area once the tide turned.

I had been changing through lure presentations quite rapidly trying to find something that would work. Success finally came when I tied on a Samaki thumper tail soft vibe. An erratic retrieve got a reaction bite. Angry chrome launched out of the water and there was my little thumper tail right on the nose.

The barra then turned and swam straight at the boat and jumped out the other side. I was in all sorts of trouble. Braid was caught around the electric motor and the barra was still going mental. The sequence of events were unfolding like some sort of beautiful trauma. I freed the braid from the electric, only to be caught up around the motor. It was hectic. I was lucky not to be cut off on the prop. I was relieved when I finally swum her into the net. The rear treble had been straightened and all that was left holding the lure to the barra was one prong off the front treble. Memories made purely from allocating time to searching out new areas.

You will be surprised where you will find saltwater barra when in search mode. The age old saying of you need structure to find barra couldn’t be further from the truth. I’ve found them out in the middle of the creek in the deeper water holding on what appears to be nothing at all.

Finding barra in sand depressions caused by the tide is a really cool find, usually because they are only holding in shallow water and away from where everyone else would look.

It does take a fair amount of discipline to dedicate entire days to searching, but if you want to unlock the secrets to any area then it’s a necessary evil. Put the time into searching new areas and then make the time to find out when the magic happens. You won’t regret it, I’ll guarantee that.