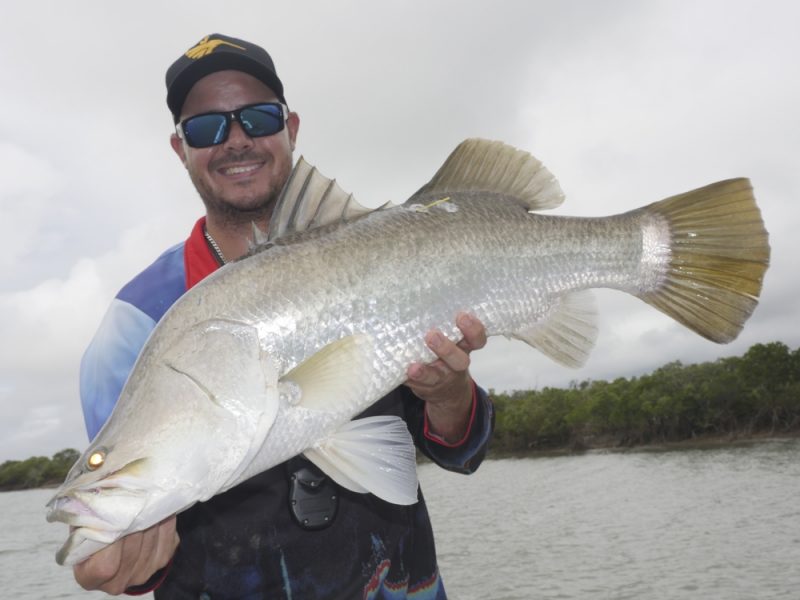 Do you follow a particular angler on social media that continues to raise the bar? It could be a single person or maybe a group that seems to be always posting trophy fish on Facey or Insta. Do these guys an gals just seem to fluke these memorable captures time and time again? Of course not. There’s a full list of fundamentals that gets these fish on the deck.

The biggest key ingredient when it comes to continued success is finding spots and areas throughout coastal estuarine systems that are away from public knowledge. To go one further, spots that are located beneath the water with nothing on the surface or bank to give them away. 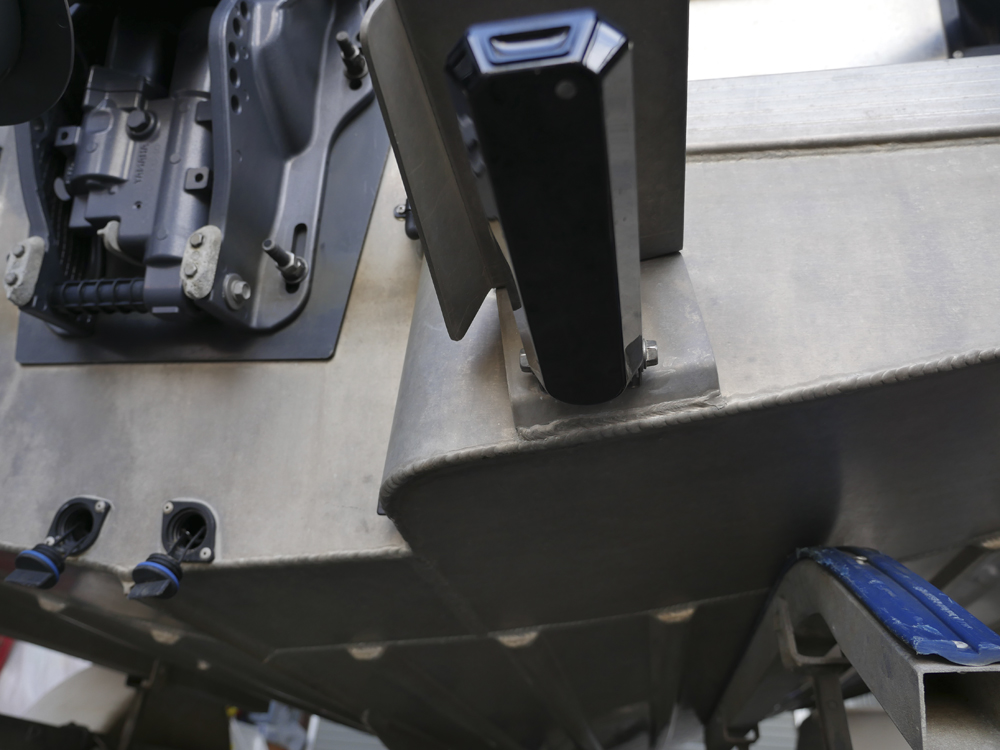 It doesn’t matter if you’re heading up to drop the crab pots in, going for a fish with the family or are on the hunt for that all important saltwater barra, reading the bottom at speed will reveal hidden gems if you’ve got a keen eye for detail.

All of my estuary fishing is done with a Humminbird Helix G2N. This is my choice of sounder for the shallow stuff as the clarity is the best on the market, in my opinion. Other brands are well and truly capable of reading the bottom at speed so it’s totally up to the angler which one they are most comfortable with. 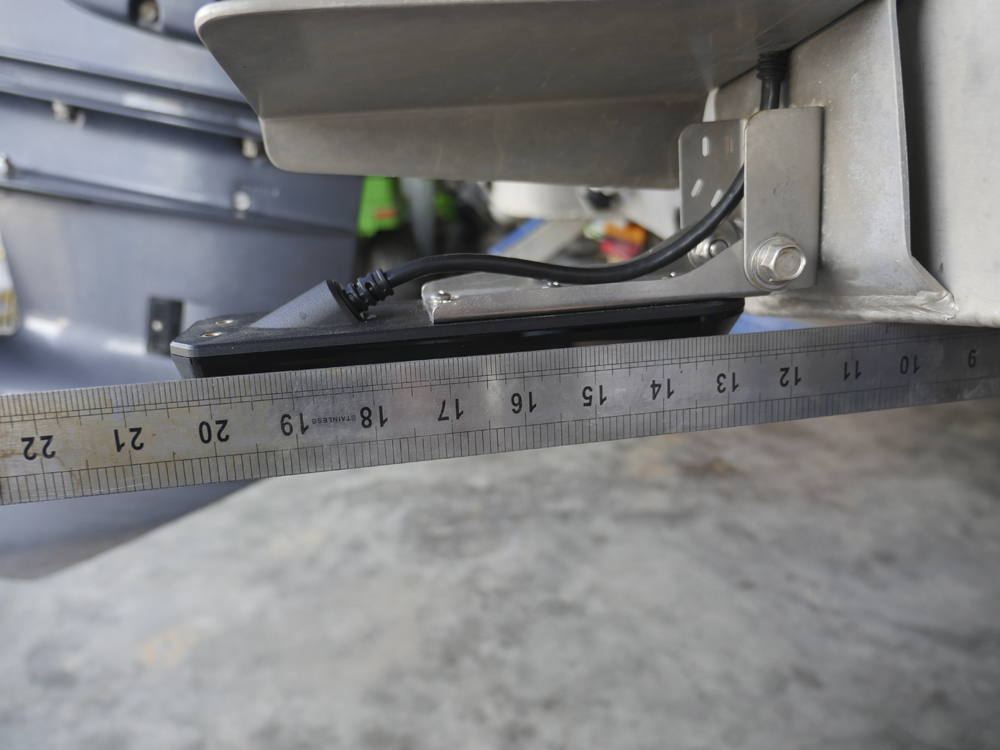 The most important part of getting any transducer to read at speed is placement. The instructions for transducer installation are generally spot on. If your boat has planing or lifting strakes across the bottom of the hull, then you will need to place the transducer on the transom in between the ribs. The idea is to get smooth clean water over the transducer that’s clear from interference (turbulence). 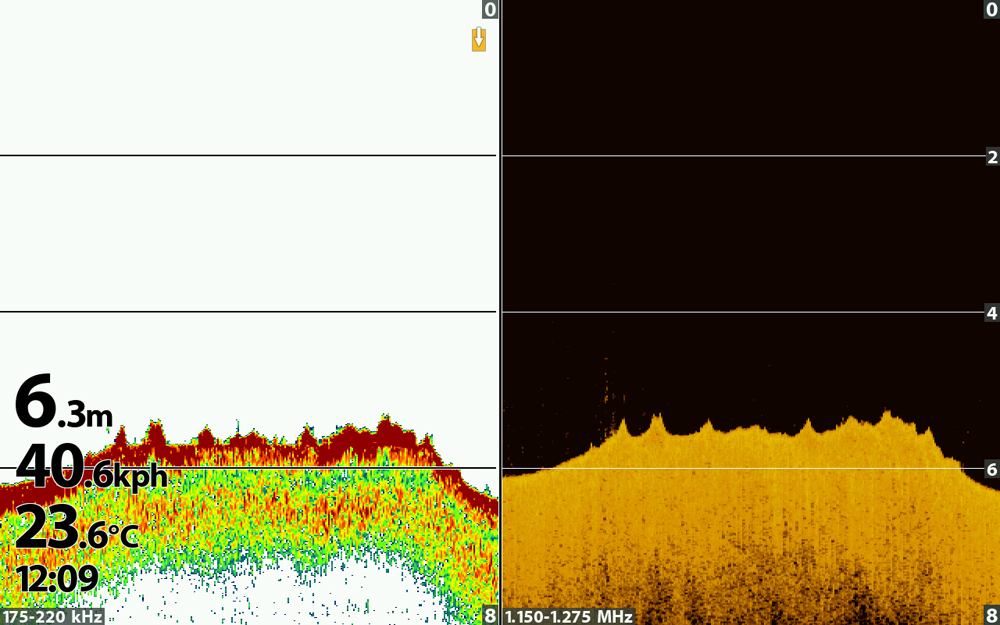 Make sure you check all the way along the hull for anything that could cause a bubble trail. Things like deck wash or bait tank pump pickups are a prime example. The not so obvious ones would be small dints or even welding slag.

Once you get your transducer installed it’s time for a water test. If the picture is not coming through clear or it’s full of interference, jump into the settings on your unit and have a play. Changing the 2D frequency back to 200khz is the first thing I would do. The narrower cone will definitely read better. Other adjustments like sensitivity and noise can be played with to try and clean the screen up. 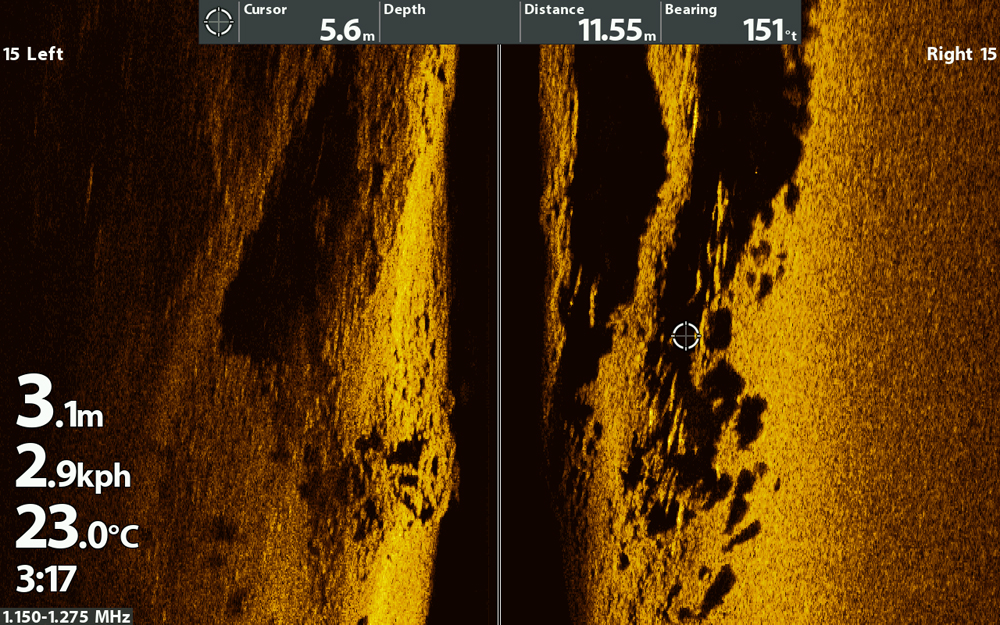 One other adjustment I just remembered that always seems to be over looked is motor trim. If your boat has electric trim and tilt it will be easy to adjust. Try adjusting the motor up and down to see if it makes the picture any better.

If none of the settings are giving you a clear picture then pull the boat out and start adjusting the transducer. Try moving the height of the transducer about 5mm at a time. Also adjust the tilt of the transducer. I have found that most transducers like to be tilted forward just a fraction as it seems to help get that clear water over the face.

If all of the tips outlined here have failed to get a result I’m very sorry to say but it’s time to take it to the professionals. Go in and have a chat with your favourite boating and marine place to see if they can help you out with the install.

So now you’ve got the transducer reading at speed, what sorts of structure will you be able to locate? The answer is absolutely anything. I’ve found mid stream wrecks when travelling the Fitzroy River and Port Alma area, gravel bars, rock bars, entire trees and holes. Some of these structures are lifeless and haven’t produced fish while others are loaded with life. Don’t forget if you do find something cool you may have stumbled across it at the wrong time. Keep coming back on different tides to check out if anything is different. 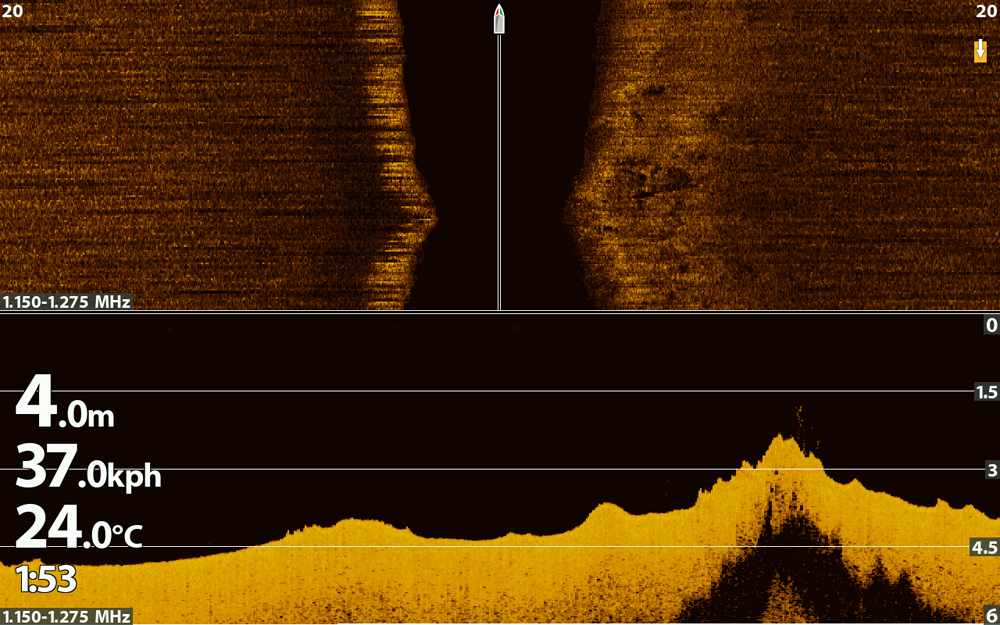 Cawarral Creek (Coorooman) is one of my local haunts here on the Capricorn Coast. To some they may know it as Starvation Creek as it can be a tough place at times to round up a feed or put some quality on the deck. I’ve spent a lot of time here and can assure you that there’s plenty of fish throughout the entire system.

There’s something that sets Cawarral creek apart from the rest of the estuaries in the Rockhampton net free zone. It would have the highest amount of hidden gravel and rock bars than any other local system. The majority of the bars I’ve found have been whilst travelling at speed.

Looking for any differences in depth and bottom discrimination is the name of the game. I’ve attached some screenshots off my Helix that identify what I’m talking about. It could be as little as small prickles along the bottom, or it could be quite a significant rise, pinnacle or pimple.

So, what sort of species would you expect to catch off estuarine rock and gravel bars? Short answer, just about every type of fish that calls the creek home. I’ve successfully caught flathead, black jew, grunter, fingermark, bream, barra, jacks, threadies and so on. The main species I chase would be grunter and fingermark.

Because these little gems are hard to locate, the fishing pressure they receive is far less and we all love a spot that doesn’t get flogged. Some of the more productive rock bars I have found I will only fish during the week when there’s less traffic. Nothing worse than handing over your hard work to someone who stumbles across you fishing the area. 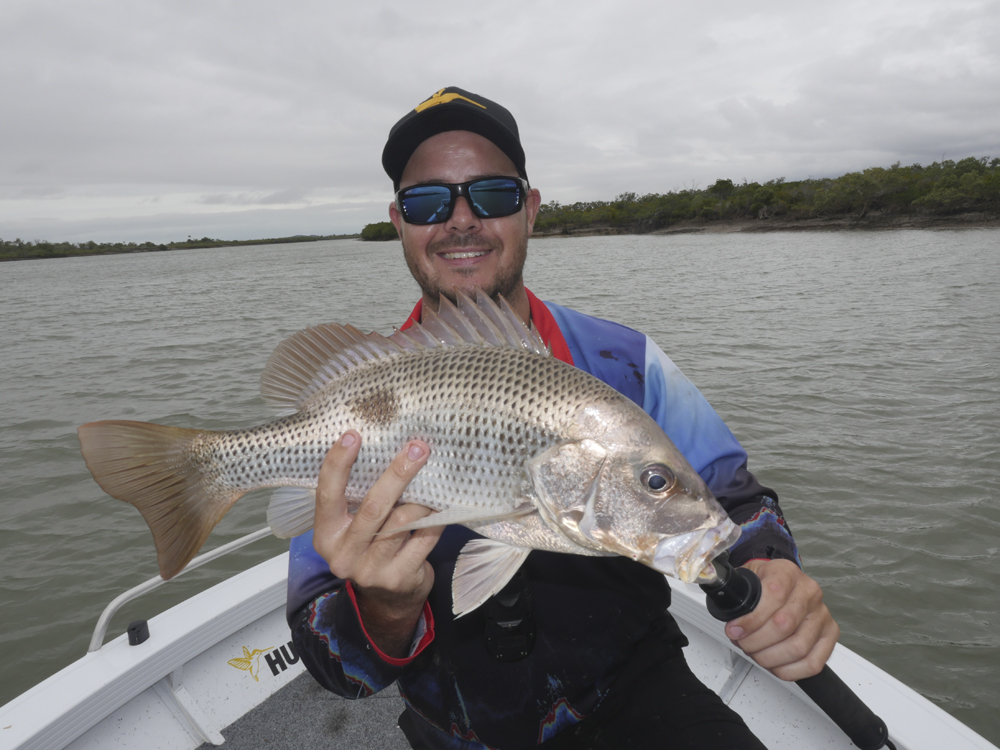 Not that long ago, I was putting a lot of time and effort into preparing for a barra fishing comp. Three solid days of searching new areas and fishing spots for little reward. You could say I was getting a bit frustrated. What I needed was some fish on the deck to restore confidence.

I picked Coorooman Creek, but especially I was going to target some isolated rock and gravel bars. I had been throwing the paint off my lure collection so I decided to do a bit of live baiting with a bit of lure casting. The aim of the day was to relax and get the mind back on track.

The live bait gathering went well and I found my first relaxing rock bar to spot lock on with the Minn Kota. Now, I said the aim was to relax, how the bloody hell do you relax when it feels like the entire Capricorn coasts small cod population wants to destroy your live bait collection?

In amongst the onslaught of cod, the bigger live mullet I had set on a circle hook sprang to life. A better fish at last. After a short fight, a beaut creek fingermark was scooped up in the landing net. Not only was I after a relaxing day but also some quality for dinner and this fitted that slot nicely.

The cod were driving me nuts, so I moved onto the next rock bar. This one had some good barra shows on it so I was in with a great shot of putting one on the deck. I deployed the rods and put the feet up. The cod were absent which was great.

I just popped the top of a well earned stubby when another boat rolled up. It was a good mate by the name of Mick. Mick knows this system better than I do so it was no surprise he knew about the spot I was on.

We had a quick yarn and Mick moved off the back to flick some lures. Imagine my surprise when the Stradic started singing sweet sounds. A chrome missile took to the air trying to dislodge the circle hook. After I was run around the boat more than once, it finally gave up. I netted my prize and swung it over the rail. It stretched the mat to 86cm. I placed a tag in the back and set it free.

I can tell you I was starting to feel a bit better and the frustration was starting to melt away. After a few more missed opportunities it was time to move on. The live baits had done their job so I went back to throwing lures. I went for a gravel bar up the back of a small feeder creek. 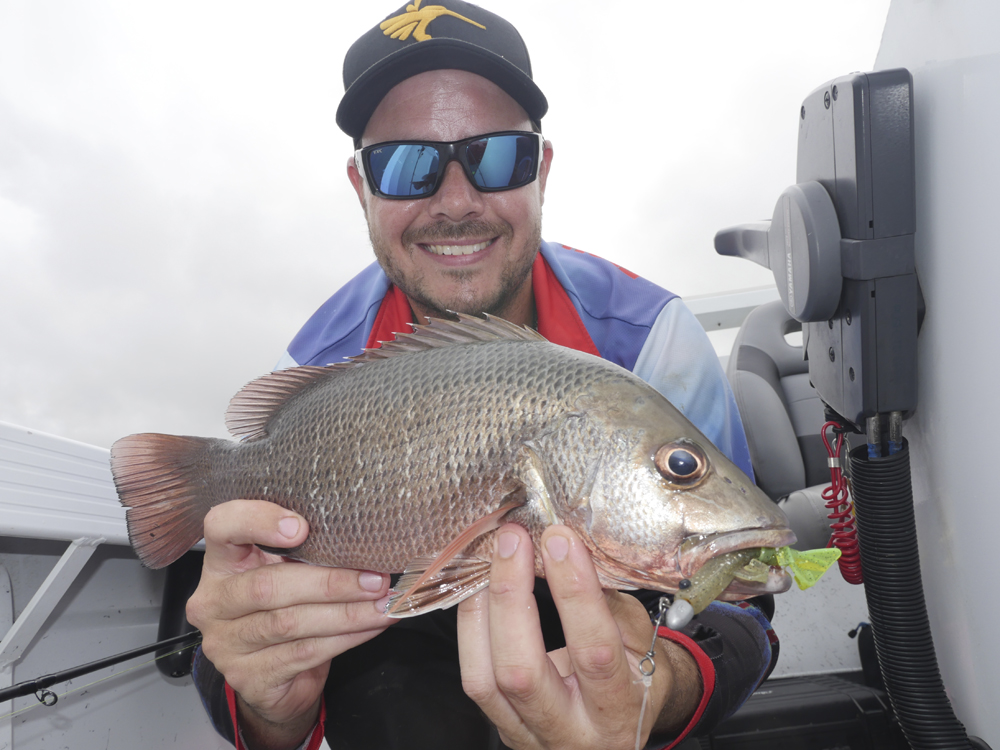 It was showing some big barra on it so I decided to stay with it for an hour or so. After trying a range of lures, I was about to pull the pin and head for home. The last lure was a new release from Holt Productions, the swim prawn. A very unique little lure that has a wicked swimming action with the legs, well worth checking out.

I cast out and was running a slow retrieve across the bottom when it was crunched. It didn’t feel like a barra but did pull a bit of string. The day couldn’t have finished off any better with a legal mangrove jack coming over the side. I had been after one of these guys for a fair while.

This is only one recent example of fishing areas that had been found while on the plane. If my transducer and sounder hadn’t been set up the way that was described at the top then I wouldn’t have been fishing any of the areas that produced the goods for this trip and may have been limited to communal spots.

I wouldn’t put any of the fish from this trip in the trophy category but it just goes to show what can be achieved by having a quality setup. Finding and fishing new areas is exciting and should be on everyone’s “to do” list rather than visiting the same areas or heavily pressured spots.

Keep one eye on where you’re travelling and the other on the sounder screen. You may have been tracking over fish rich country hidden from view for years. Attention to detail will give you the keys for unlocking amazing potential.

Next month, tune in for part two and we will have a look at finding hidden gold mines at a much steadier pace.