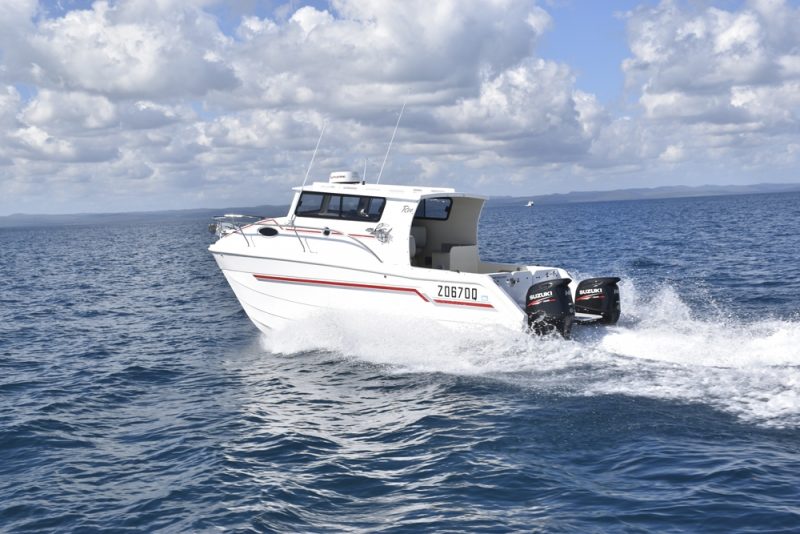 You may recall, that in the March 2019 edition of Fish and Boat Magazine. I was lucky enough to review a 4.5m Tri Hull Whaler built by Sandy Straits Marine in my hometown of Hervey Bay in Queensland.

Since then, David Frame (the owner of Sandy Straits Marine) and I have been waiting patiently for the opportunity to review a much larger boat, designed by Noah Thompson and built by the team at Sandy Straits Marine. A 7.3m Power Catamaran named Roo.

Sandy Straits Marine was first established by David Frame in 2004 and is located near the Urangan Fisherman’s Cooperative in Hervey Bay. It offers an extensive fibreglass repair and fabrication service for boats, caravans, mobile homes and other structures which use fibreglass products.

The team there are also leading the way with some innovative boat building designs which incorporate a unique basalt fibre in the layup. Within the design of the 7.3m Power Catamaran the team at Sandy Straits Marine have used heavy grade Basalt Fibre Fabrics to add further strength to the catamarans hull by reinforcing the internal ribs. Basalt fibre is extremely light and immensely strong, which means the overall weight of this boat is quite surprising.

At just over 1,800kg dry weight, matched with an 840kg trailer, the reduced weight of this boat provides many advantages and a few little performance differences.

Without any doubt, driving a power catamaran does take a bit of getting used to, especially when you have spent a lot of time driving monohull boats. The hull design of a catamaran differs greatly from a traditional mono hull, with essentially two parallel hulls of equal size sitting side by side, separated by a funnel. 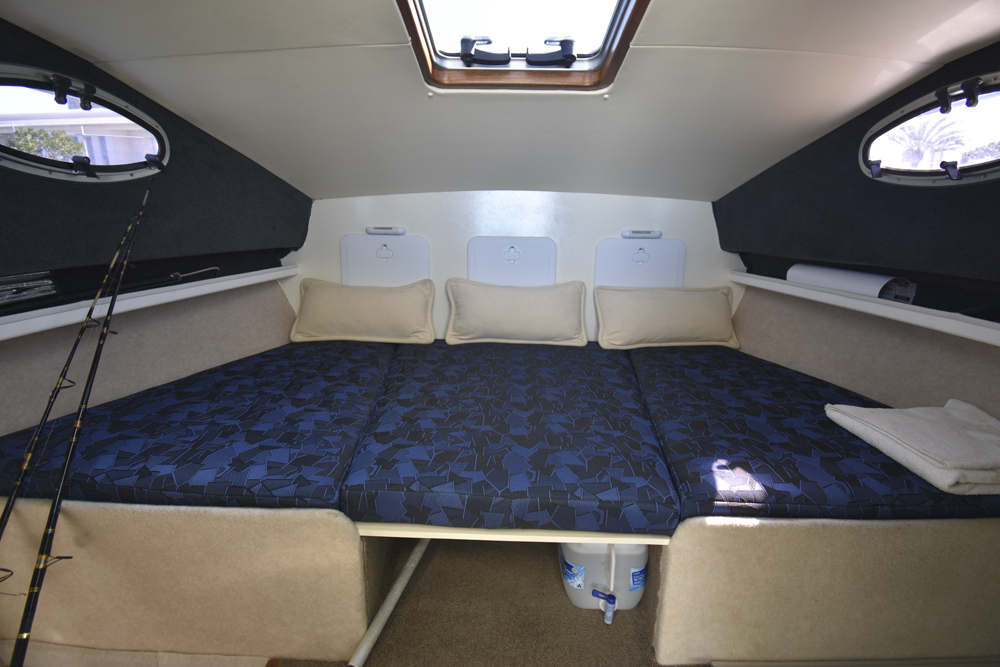 The size and shape of this funnel is very important as it greatly influences the performance of the catamaran while also providing a cushion of air. This cushion allows a catamaran to generate a smoother ride across ocean swell and chop.

The two hulls sitting side by side also increase the beam of a catamaran providing greater stability that a monohull. These two hulls also offer less resistance in the water when compared to similar sized monohulls and in turn require less propulsion.

Turning in a power catamaran does take some getting used to. Due to the nature of having two hulls parallel and some complex hydrodynamics, most power catamarans turn with a slight outward lean. The complete opposite to a traditional monohull which leans inwards during a turn.

When you first lay eyes upon the 7.3m power catamaran from Sandy Straits Marine named Roo, you immediately see a lot of boat. Unless you are in the know about the unique weight of the boat you would be forgiven if you thought this boat was going to weight an awful lot.

Once on the water you again feel like Roo is sitting high in the water. It is about here, that I started to notice a couple of little differences between this power catamaran and other power catamarans I have ridden in. 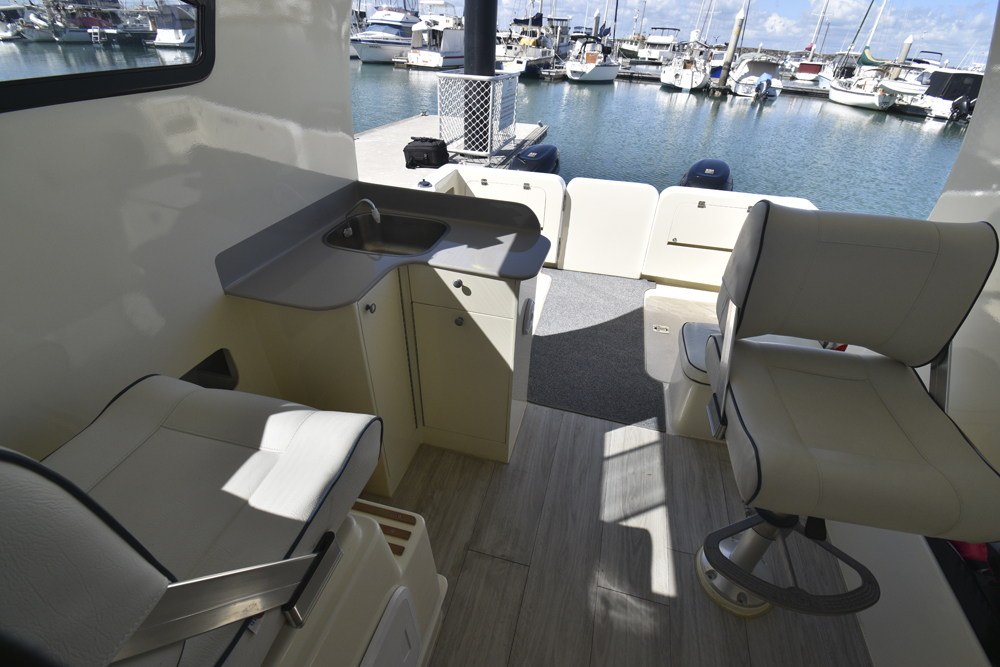 The lighter hull design means increased fuel efficiency while powering along. With twin Suzuki 140hp outboards fitted on Roo, we managed to achieve a fuel burn of 14 litres per hour for each motor while travelling at a comfortable cruising speed of 24 knots. Which, when you consider the massive twin 270 litre fuel tanks, provides a massive amount of range. Roo is rated to a max horsepower of twin 150hp motors.

The lighter hull does, however, mean that the boat gives up a little in stability and with a family of four on board, all standing on one side of the boat the hull does lean a little. Certainly nothing to worry about, but it is noticeable when compared to other, heavier power catamarans of similar size.

This is a trade-off, as the lighter hull not only provides greater fuel efficiency, but it also means the boat lifts quickly onto the plane and when trimmed well provides an incredibly smooth ride. Taking full advantage of the cushion of air between the boats twin hulls.

On our testing days, we were gifted with calm conditions, which is great for capturing nice photos, but unfortunately did not provide an opportunity for us to drive Roo in rough testing conditions. 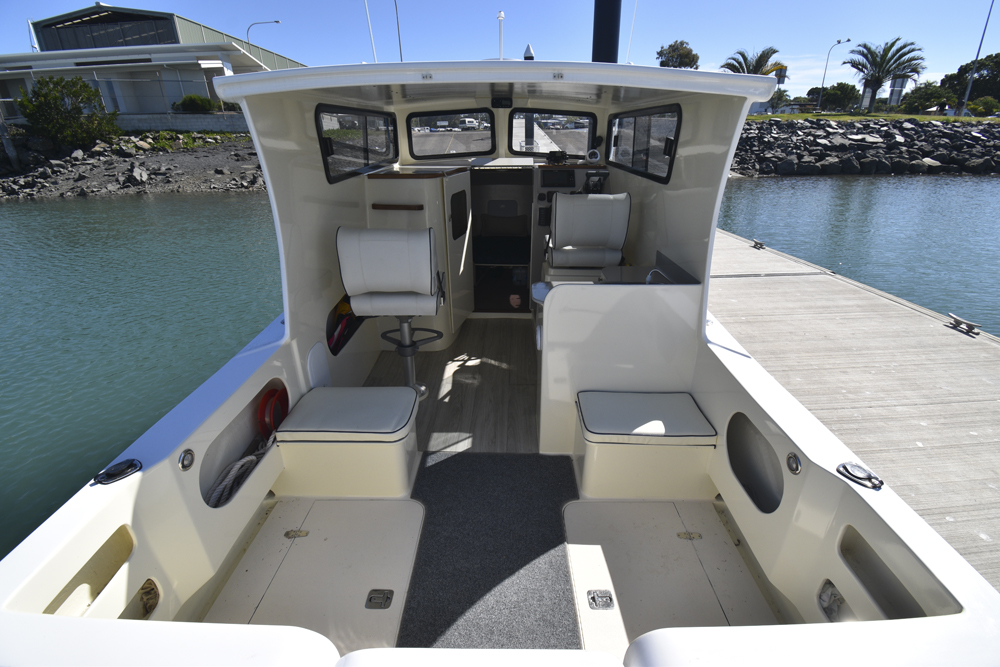 We did manage to chase some swell produced by the local whale watching fleet. We hit this swell at different angles with the trim deliberately out of whack to see how the boat would perform and completed a series of tight turns and figure eights with expected results.

On the second day, my family joined us to show the functionality of the boat. We drove it as we would expect any skipper to drive this boat with correct trim etc and the boat provided a stable, smooth ride and proved a hit with the family, who enjoyed the comfortable layout.

The layout of Roo, our test boat was very family friendly, with several amenities which hardcore fishers would most likely opt not to have. A shower and toilet along with a 100-litre freshwater tank and 65 litre black water tank. A sink, small kitchenette space and comfy cabin all made it extremely easy to convince my wife to join us for a day of capturing lifestyle photos.

The good news is that you can customise the layout of these boats. You simply need to speak and work with David to design your own layout for your specific needs.

Starting at the bow, Roo, is fitted with a Maxwell anchor system operated from the skipper’s position through a simple up and down switch. We deployed and retrieved the anchor while testing Roo and found it to be extremely easy to use. If there were to be any hiccups, you can access the anchor through the forward hatch. Being of slightly larger build I did find the access hatch size a tight fit, but manageable.

Alternate access can be gained by climbing along either side of the cabin, although foot holds are narrow, and you would rely heavily on the grab handles on top of the cabin to prevent you from falling into the water. There are stainless steel rails around the entire bow area which provide something else to grab hold of.

Coming back into the forward cabin through the forward hatch, you are in the sleeping area of the boat. There is plenty of room for two full grown adults or a couple of kids to lie down, with room to spare. There is plenty of head space and storage options. Access to the combined toilet and shower space is through a large single door. There are also lots of hatches for storing items and a hatch to gain access to the rear of the skipper’s console. Here you can maintain and adjust wiring harnesses etc.

Stepping out of the sleeping area you are at the skipper’s station. The navigator’s seat is slightly set back due to the combined shower and toilet space taking up space where the traditional front navigators’ seat would be.

The skippers console has plenty of room for your electronics with Roo being fitted with a Raymarine sounder and radar combo. Suzuki digital gauges, switches, anchor control, binnacle, VHF radio and compass. A fusion sound system has been installed above the skipper’s console.

Visibility is more than adequate through the two forward facing windows and large side sliding windows. Of note here, David has had the floor height adjusted to suit himself. At 6ft 2inches I found the ceiling height comfortable but anyone taller will find their head hitting the hardtop.

Both the skippers and passenger seats have reversable backrests, meaning you can sit in the shade of the hardtop and stare out across the view from the rear of the boat. A great vantage point to watch the kids swim.

Behind the skipper’s seat is a small kitchenette with a plumbed sink, connected to the 100-litre freshwater tank. There is enough room to use a single burner gas cooker. And to store and clean dishes after enjoying a meal.

You then step out onto the rear deck, surrounded by nice high sides, so you don’t need to worry about children falling out of the boat easily. There are two bench seats with cushions, these can connect to a pair of folding seats located in the transom which together convert into two-day beds for soaking in the sun. 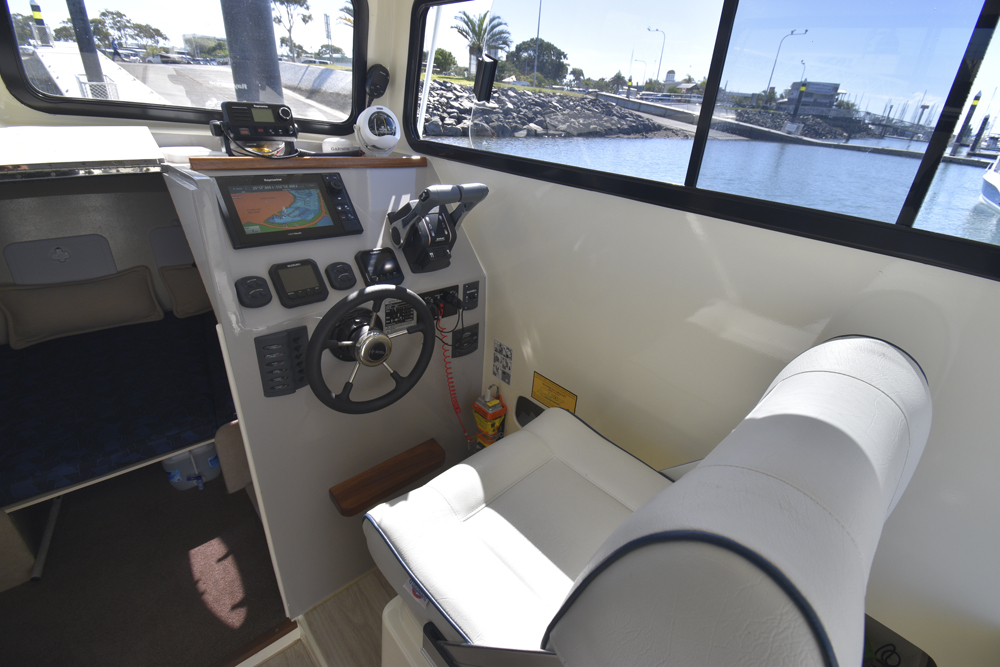 Under these there are two massive storage hatches, large enough to fit my 9 and 6-year-old children. One is fully insulated to keep ice and your catch cool for days at a time. There is a small door in the centre of the transom with provides access to the rear landing where you can fish from, inspect your motors and by using the cleverly hidden boarding ladder you can climb on and off the boat.

Speakers for the stereo, lighting, rod holders, little hatches for storage and open cut panel areas are in abundance throughout the boat, meaning there is no concern storage wise. David has also had made a custom set of storm covers to completely enclose the rear deck area at night, for added security during storage or for heavy weather protection.

As I mentioned previously, the test boat Roo, is extremely well laid out for families and very comfortable. Hard core fishers I suspect would opt for a more open layout to maximise space to move around and fish.

My final thoughts on the 7.3m power catamaran built by Sandy Straits Marine in Hervey Bay, Queensland. The test boat, Roo, in its current configuration is a great option for families who are looking for a reliable power catamaran to island hop through the Whitsundays or to explore the Great Sandy Strait.

It has all the creature comforts you need. You can of course fish from it, but I suspect hard core fishers will be contacting David to discuss more open layout designs to maximise fishing deck space.

The fuel efficiency of the hull provides tremendous range for this boat. Boating north along Fraser Island all the way to the tip and then returning to the harbour with fuel to spare is certainly an appealing feature of this boat. Especially for anglers who like to reach those far away hidden locations to catch their dinner.

It is great to see a local company being innovative in boat design. If you feel this boat would meet your needs, then I suggest a trip to Hervey Bay for a day of water testing with this boat is a must.