A Snag to Remember – By Jamie Behrens 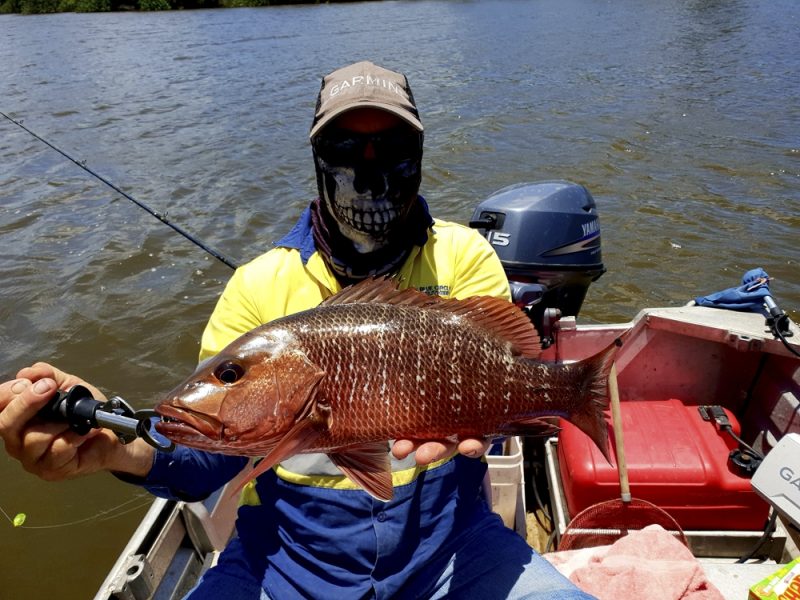 Summer time coinciding with the Christmas holidays usually spells marlin in my world. The sunshine coast is usually hit by an influx of juvenile black marlin which has me racking up plenty of engine hours. Weather plays a huge part in any trip offshore and with the forecast looking dodgy it wasn’t looking good. It was looking like my two weeks off work was going to be spent in the rivers around Caloundra, Maroochydore and Noosa chasing mangrove jacks.

The areas around my area are vast, with multiple rivers with their adjoining feeder creeks, marina’s, bridges and rock bars. My son Michael and myself decided to fish the snags in the Noosa river for a start. The area upriver abounds with fallen trees surrounded by mangroves, but after several trips we had only managed to release a couple of jacks. The fishing wasn’t hot enough, so another creek was needed. Bell’s creek, south of Caloundra was one I’d heard about from a good mate of mine Mick Wrack. Plenty of fish up there he said, so Michael and myself gave it a go one hot summer’s afternoon. The river looks great with plenty of snags but on this day, we only encountered two small jacks. 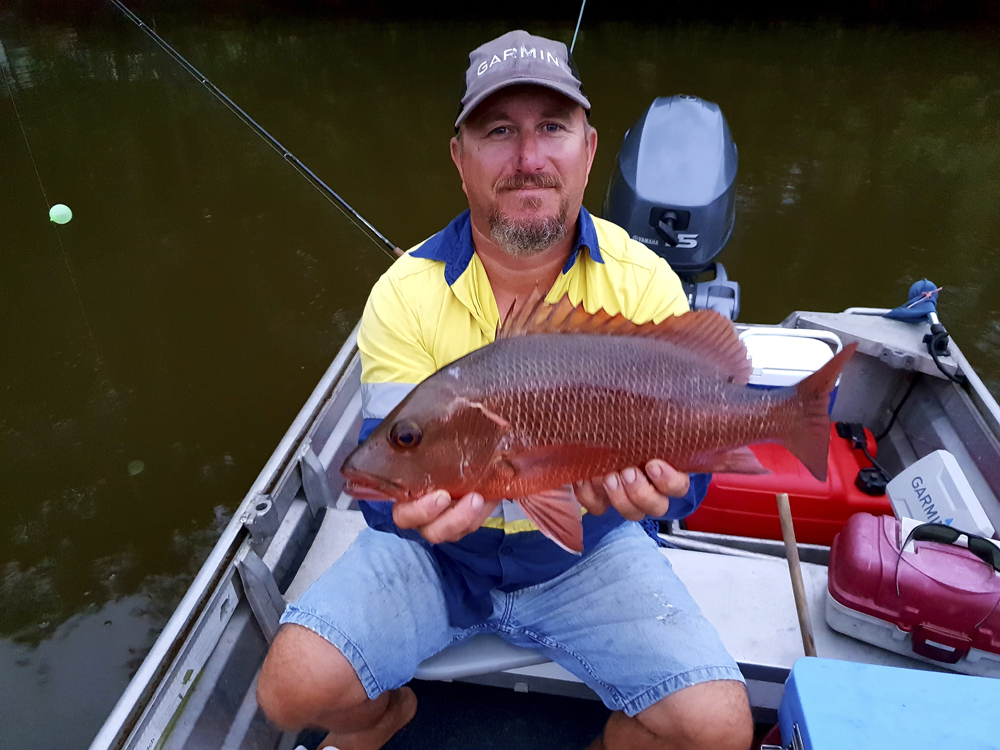 Fishing still wasn’t good enough, time for another change. The Maroochy river has produced a few jacks for me over the years on both bait and lure. I had been shown a rock bar up Petrie Creek which usually holds plenty of jacks, so it was decided to try this spot. Micks son Ethan decided to tag along with Michael and myself one morning to give the rock bar a go. We gave the spot a couple of hours with zero results; frustrating was the word and it had me thinking where to go next. Eudlo creek, why not. This area can be quite good for prawns and usually holds plenty of mullet. I decided on an area with a few fallen trees but after an hour soaking mullet strips, we had only caught a couple of bream. 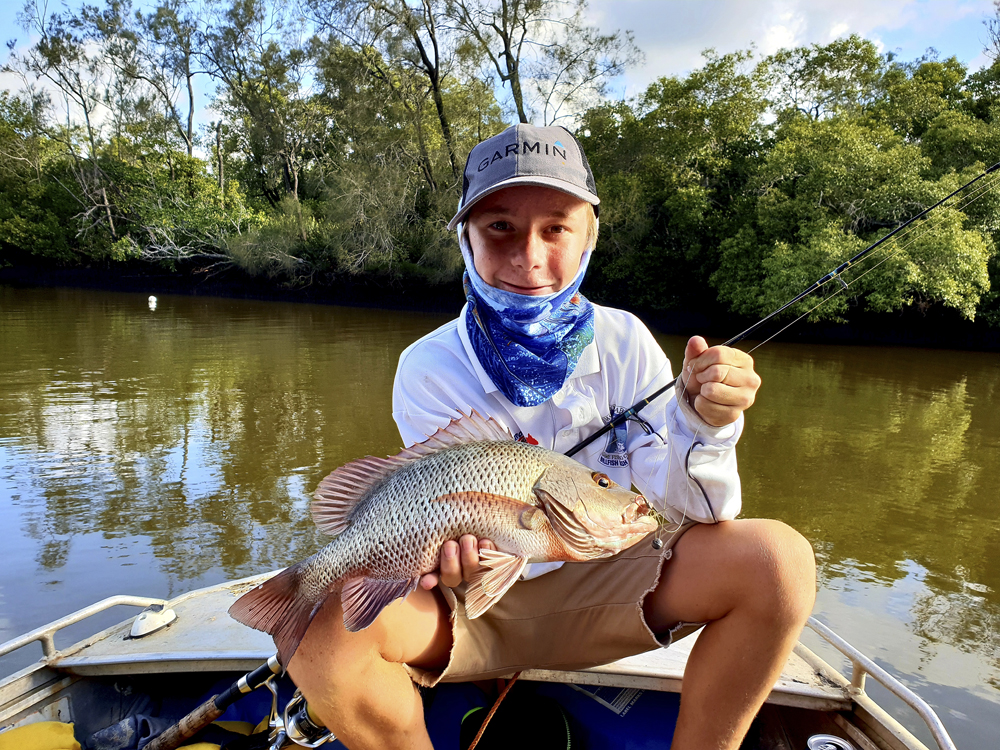 Mullet were getting chasedin the shallows, time to grab the net and have a few casts. Bang, first cast, 7 mullet, ‘’that’s enough’’. I motored up river to another fallen tree, rigged up the live mullet and cast near one of the branches.‘’Zzzzzzzzzzzzzzzz- snap’’. ‘’Wow, that was quick’’, instant hook up then blown away. I re-rigged, hooked up another live mullet then cast it in the same area as before. ‘’Zzzzzzzzzzzzz- snap’’. Not again, there must be some fish here. Ethan cast his live bait into the snag and had the same result. We ended up going 1 from 5 that day but knowing we had stumbled on a hot spot I was already planning tomorrows attack.

Michael and myself headed back up river the following day with high expectations. Mullet were everywhere so gathering bait was easy. The wind was blowing again so I decided to fish the boats side onto the snag, bow tied to a tree, anchor out the back – thiswould stop us from swinging about with wind against tide. Knowing what jacks do when hooked, I re-checked my drag to make sure it was wound right up. A fully locked up bait caster with 30lb braid on it should stop most fish you would think, but when fishing the live bait less than a metrefrom the snag you have to go full on to stop them. I reminded Michael not to place his rod on the side of the boat which is a sure-fire way of losing your rod over the side. Hang onto it or put it in the rod holder. Things were a little quiet at first but changed dramatically when they decided to feed. We were able to stop several fish but lost more to the snag that morning. Mick and Ethan were also fishing in the area and too were having similar results.

Several days past with the tally of fish increasing, but unfortunately the tackle box was getting a hammering. Loosing gear to snags on the bottom was annoying so tying a water bomb balloon onto the main line and floating my live bait back to the snag should fix the problem. Not only did it stay away from the bottom snags, but it made my live bait stand out which had me hooking up every couple of minutes. The only problem with this rig was with low current flow, the live bait would sometimes swim in circles and tangle the line. The normal way I rig a live bait on a two-hook rig is to place the top hook through the nose with the rear hook placed near the tail. This is fine when fishing in some current but no good when the current is weak. Mick showed me how he rigs his baits which is the total opposite. Top hook near the tail with the bottom hook up near the head. This allows the bait to swim away and is less likely to tangle. I put this into practice with the balloon rig with instant results. Watching the balloon vibrate and move backwards and forwards along the tree had me on edge all the time, whoosh, zzzzzzzzzzzzzzzzzz. The fights were a fairly quick affair as you couldn’t give them an inch. Net, tag, measure, photo- release. These fish are way too good to catch once so releasing them was easy. This fallen tree was producing some amazing fishing. 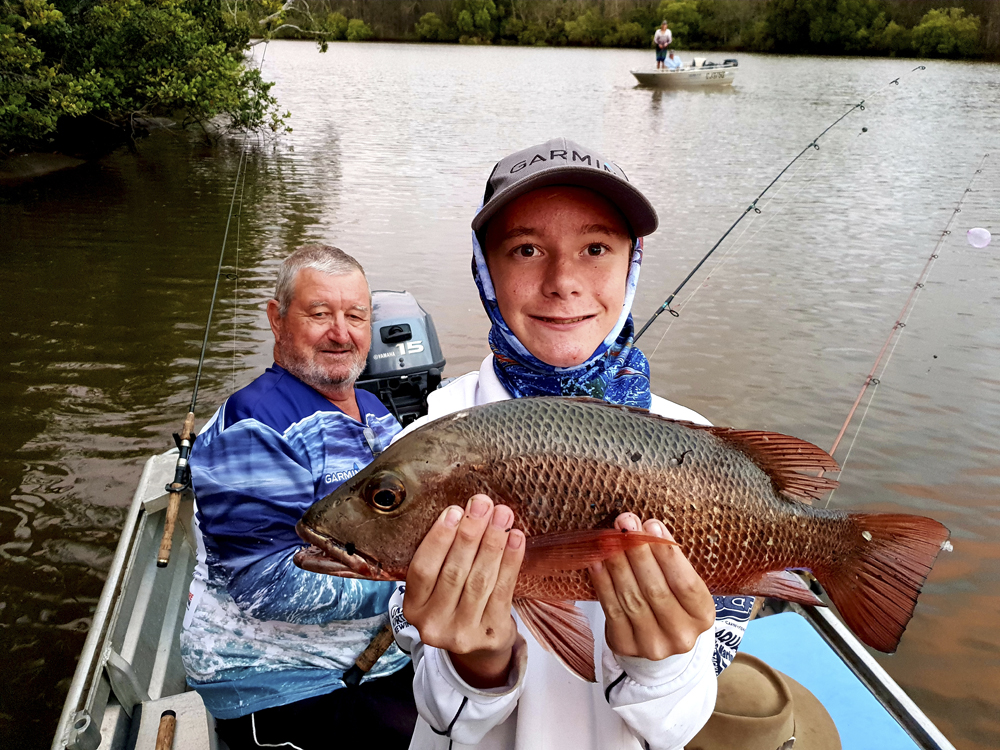 Over the following week between Mick and myself we pulled at least 30 mangrove jacks from that snag with only 2 kept for the table. There were a few other species living there as well- bream, cod, small bull sharks and a couple of big barra, which unfortunately failed to hook up properly.

As with all good things, they eventually come to an end- back to work. I didn’t fish the snag again and haven’t been up there in months. All I can hope for is that the snag is still there next season, so too the mangrove jack.