Not all winches were created equal – By Peter Ford 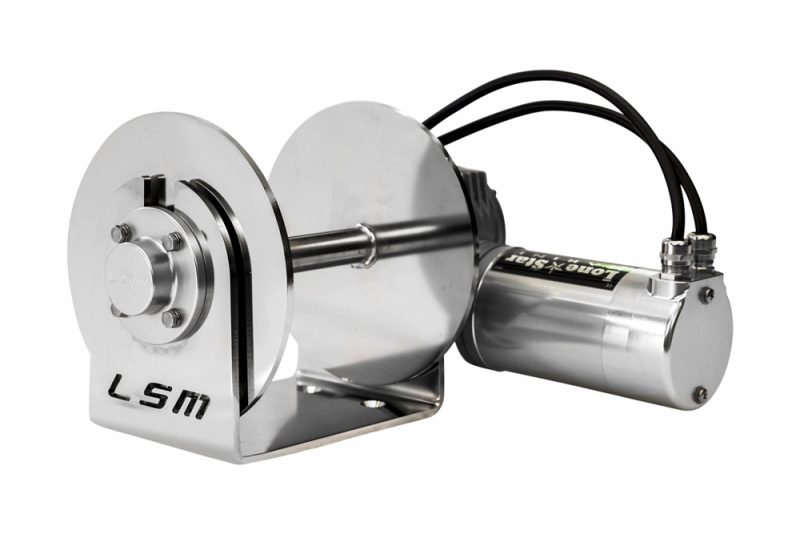 Fish and Boat Magazine have embarked on building another project boat with local Sunshine Coast Boat Builder Offshore Marine Master being given the task again of building the new 7.5m vessel.

One of the first bits of equipment chosen was the winch and Lone Star Marine winches are leading the market with Quality Australian made product, in fact they are even selling them to China among many other countries in the world.

Simply put, they build a very simple, but super tuff range of winches to suit any boat up to 20m in length.
We had the GX3 model winch on our last boat and loved it, but found the spool was limited to anchoring in depths under 50m, so after discussions with Malki from Lone Star, his suggestion was to replace the spool with 300m of Dyneema referred to as HMPE instead of the standard 90m of 12 mm nylon. 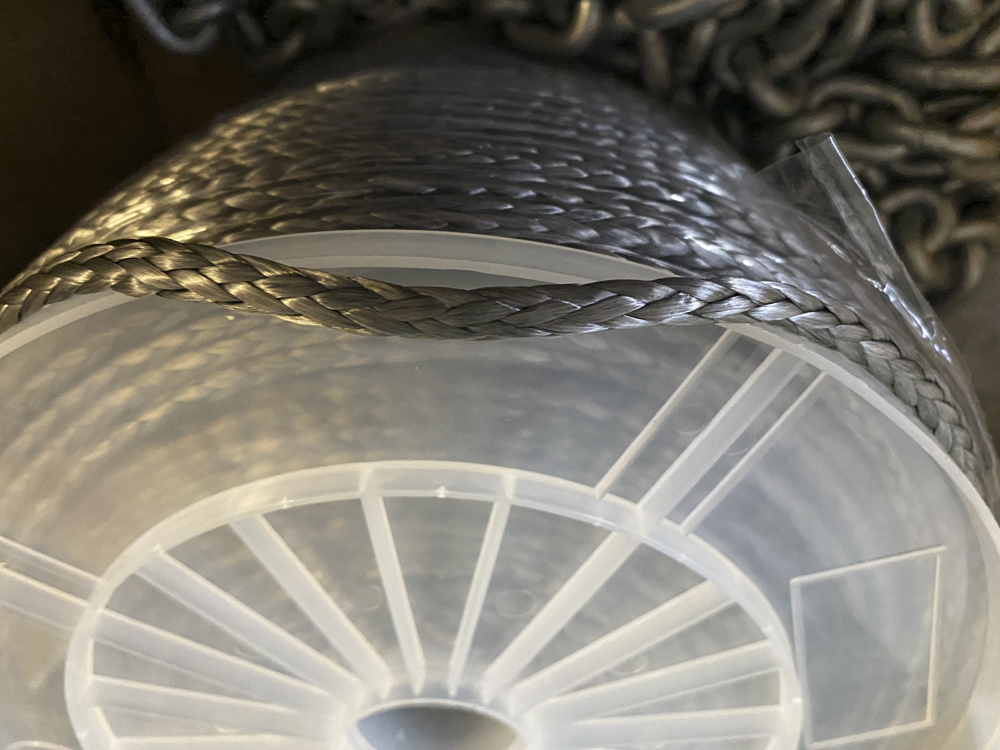 This was a scary thought as this HMPE is only 5mm thick, but has the same breaking Strain of the standard 12mm double braided nylon, its crucial that a top shot of about 8-9m of nylon is added as a top shot as the HMPE has no stretch so this acts as your shock absorber.

It also acts as a buffer for seafloor abrasion so the much more expensive HMPE main line is never damaged. Top shots can simply be replaced as required at minimal cost and effort.

These winches are also backed by an extraordinary warranty being 5 Year on all components plus a Life Time Warranty on Drive Component Damage due to Water Ingress. Nothing else comes close to offering this type of warranty on something that lives its life in harsh conditions, real peace of mind here for us. 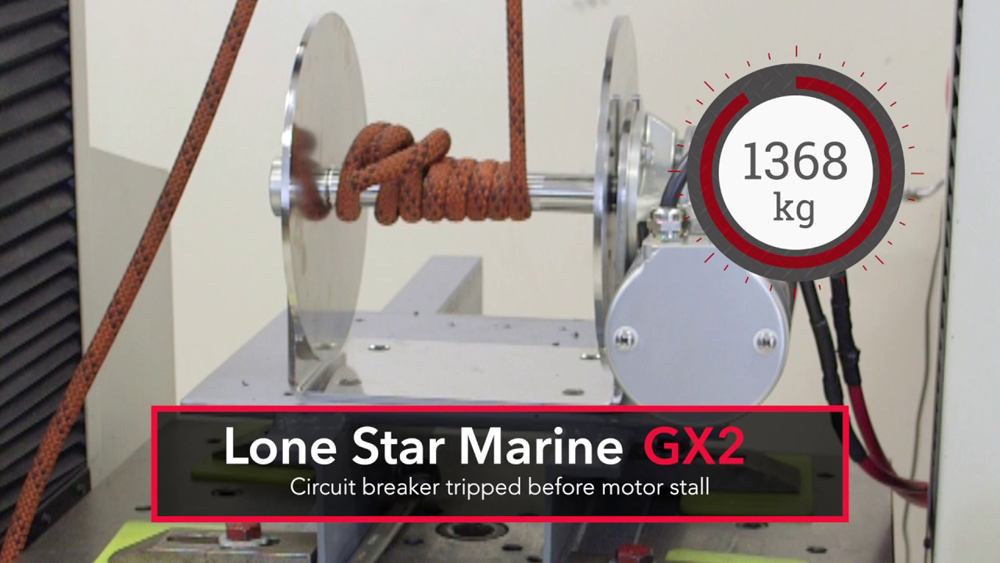 Australasia’s John Willis from Trailer Boat Australasia was asked to oversee a Torture Test with 3 other leading brands up against a Lone Star winch. All winches were to be their standard winches to suit a 6m boat. These tests are also availble on You Tube.

Let’s face it; all winches are made for one thing and one thing only – pulling stuff! The empty and full drum rewind tests show the real muscle with the absolute maximum pulling power. The tests were conducted with both empty and full drums allowing for variance in torque due to spool diameter. Drum winches are bi-directional (can run either way) hence tests were run in both directions and the results registered on a calibrated universal test machine.

The maximum pull on an empty drum test was conclusive with Lone Star Marine’s GX2 coming out a clear winner pulling a massive 598 kg more than its closest competitor, and 1001 kg more than the worst performer.

The spools were then loaded with 8 mm double braided nylon rope on each drum, filled 30mm from the drum edge and re-tested. (The 30mm would normally allow for the anchor chain) The Lone Star returned an impressive 113 kg more pull than its closest competitor and a whopping 255 kg more than the lowest performer.

Drop speed is an important factor for drum winches as we want to hit the desired anchor position quickly without an overrun. The drums were once again filled with 8mm double braided rope to 30mm from the drum edge. All of the units returned very even performance with the Bell Marine Vipor Pro Series 1000  dropping the fastest (50.4 m/min)some 7.2 metres per minute faster than the slowest Savwinch 1000SS (43.2 m/min).  Lone Star’s GX-2 (46.7 m/min) was a minimal 3.7 metres per minute behind the Viper, and StressFree (45.5 m/min) only 4.9 metres per minute behind the leader. In practical terms with most anchoring for recreational boats being performed in less than 25 metres of water there is only a matter of a few seconds separating the brands.

This was the real eye opener! In this test the units were required to lift and lower under power a 50kg weight suspended from a rope through an overhead pulley 5m from the ground repeatedly for a test period of 100 cycles or until the circuit breaker was tripped or product failed.

This was indeed a torture test designed to push products to their limits under continuous heavy load. We wanted to get an idea on sustained torque in these extreme conditions such as a lodged anchor with adverse effects such as tide and swell; in common terms how much grunt, and for how long?

The results were staggering!

Comment – After stalling 2 cycles the Savwinch failed to operate again that day. The Viper failed after the test, about halfway through unwinding the rope. Both the Lone Star, and Stress free remained functional as normal.

After the test and prior to dismantling, each unit was reconnected to their power source and assessed. The Lone Star Marine, Savwinch and Stressfree Marine winches would rotate in an unloaded state. The Bell Marine Viper winch simply would not activate or rotate.

All winches were then quote: “dismantled and the internal components examined for signs of failure or excessive damage. All the internal components of the Lone Star Marine, Savwinch and StressFree winch motors were observed to be in working order with no cracking, melting or other forms of physically observable failure. During disassembly of the Bell Marine (Viper) winch motor a pungent odour typical of burnt electrical components was evident. The rotor coil was found to have jammed against the surrounding magnets. Plastic components attached to the poles and brushes were observed to have melted, spreading debris throughout the motor. Upon forcibly removing the rotor coil, the magnets were observed to have cracked and shattered and the rotor coil was covered in debris consisting of fragments of plastic and magnetic material.” In layman’s terms the motor was totally burnt out.

It’s interesting to note the Stress Free Marine Winch was perfectly operational immediately following the test. It may have completed fewer cycles than the Viper but it did have the distinct advantage of working again, the motor appeared in perfect condition. In this case the circuit breaker seems to have done its job in protecting the motor from damage. Keep in mind this manufacture rates these motors as 500W, as opposed to all three others which rate their products to 1000w. The motor was at ambient external temperature immediately following the test.

The stalled Savwinch is a bit of a mystery with no explanation for stalling and failure to operate again that day. Upon full inspection all internals appeared to be in perfect condition. The motor was at ambient external temperature immediately following the test.

The Lone Star GX2 is an anomaly; in 100 cycles the motor did get hot to touch yet failed to trip the circuit breaker. Internal inspection revealed no damage and the unit continued to function as normal.

Following the test the Viper motor was hot to touch, and as stated suffered complete internal failure.

The Lone Star Marine GX-2 winch conclusively out performed all competition in every test other than drop speed. Now if only we could find a laboratory that can test boats in real time quantifiable performance such as this winch test we’ll really be getting somewhere! 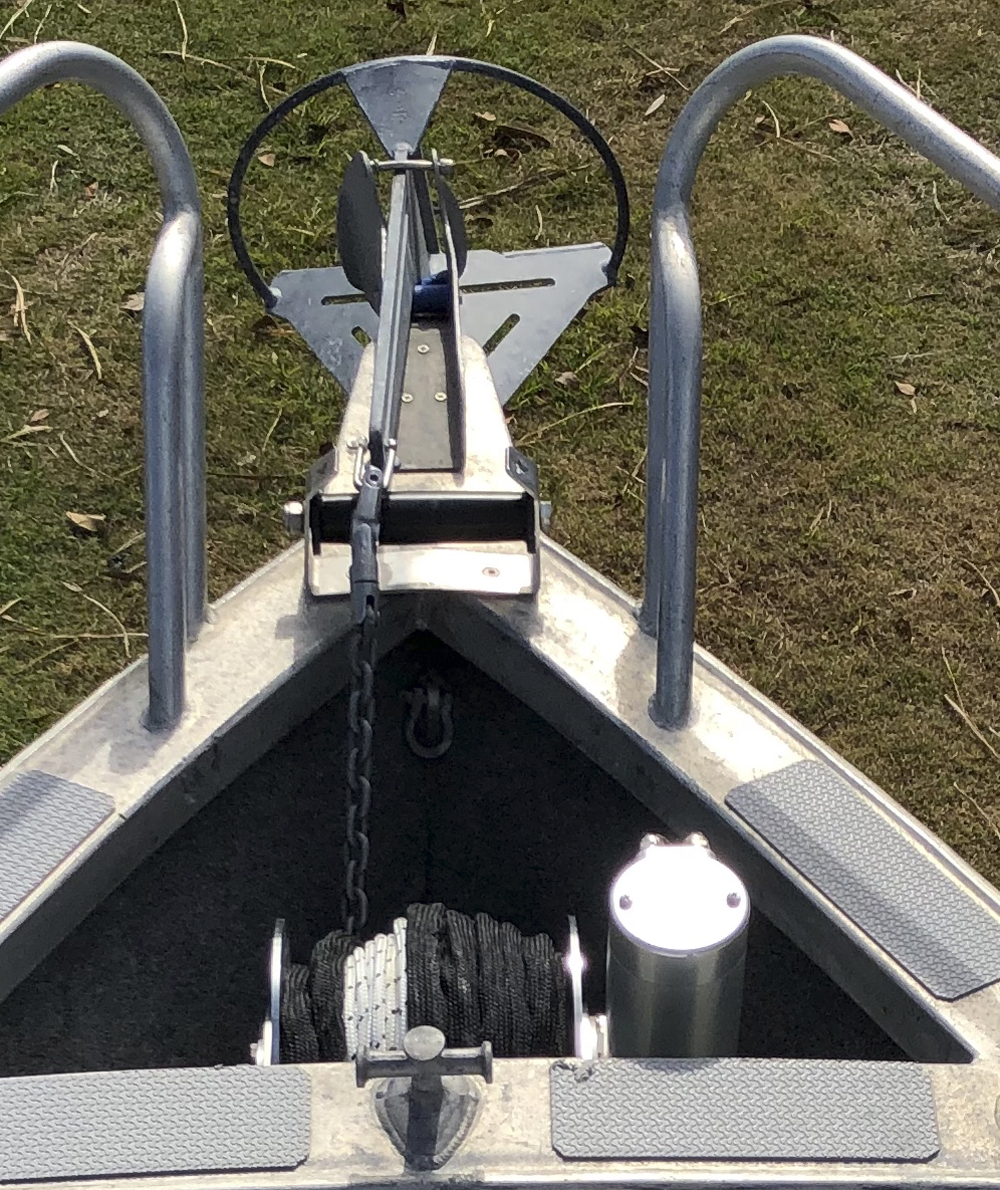