Flying Solo, with the Big Girls – By Craig Latimore 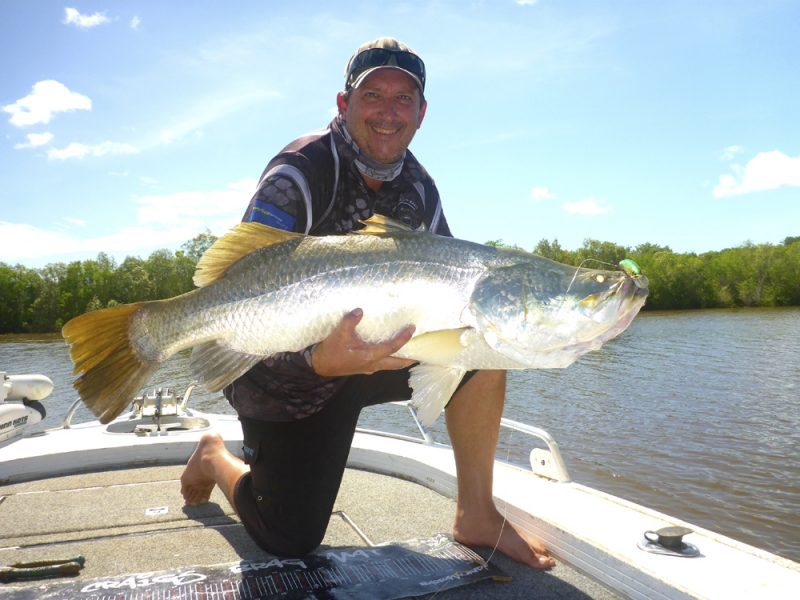 This year’s Northern Territory run off was quite poor, with very little rain falling on the flood plains. In fact, if it wasn’t for a late monsoon burst, it was terribly close to becoming one of, if not the worst, wet seasons on record.

Don’t get me wrong, it has still happened, but like last year’s run off, it is short and sweet. Add that with the current virus scare and travel restrictions, and it has made it near impossible to get a decent shot at some big barramundi that the NT is famous for.

However recently, I was presented with an opportunity to chase a big barra and it just so happened to line up with great weather and tides. But due to social distancing I had to go it alone. Fishing solo can be so rewarding but for me, like many others, comes with quite a few challenges. Firstly I need to be confident enough to stay safe on a 3 day/2 night trip into a remote NT river where there is no phone reception, and probably 5 hours (at best) from help if things were to go ‘pear shaped’. Secondly, I need to launch and retrieve my 6.1m Top Ender solo at a ramp that has the highest population of Estuarine Saltwater Crocodiles anywhere in the world. And because of tides, that launch needs to be done during dark hours. 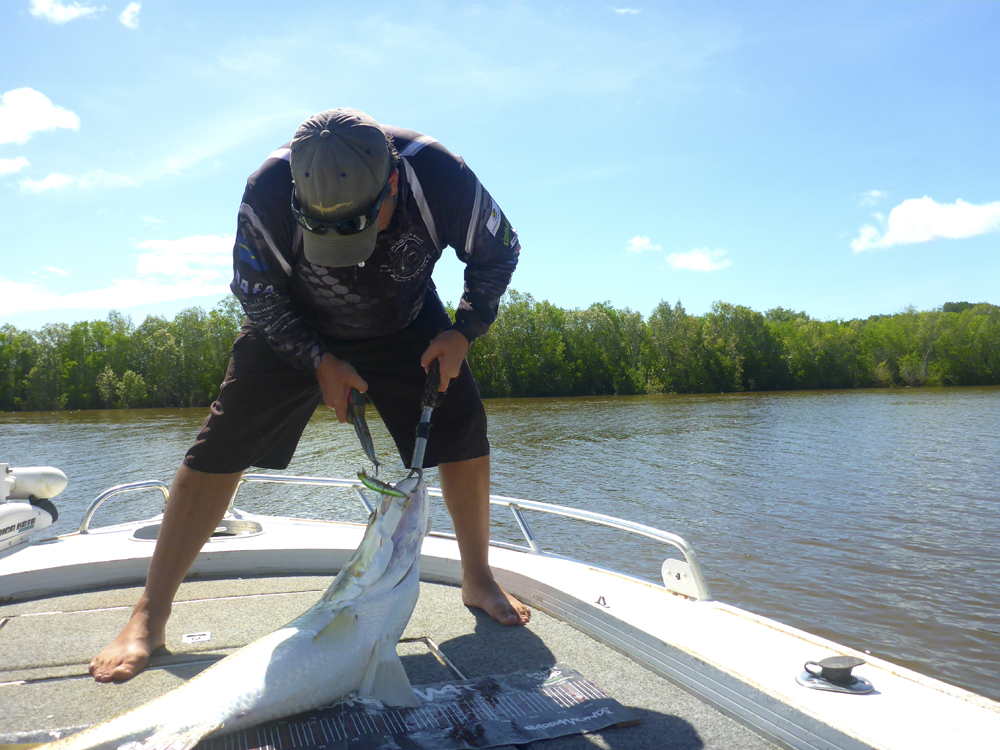 Everything went really smoothly for me. Everything happens a little bit more slowly during dark hours so it took me 5 hours from my driveway to the river that I wanted to fish for 3 days. It was the first time I had been there this run off and I tell you what, the smell of that run off water was very welcome indeed. I feared that it would all have disappeared and the barra may have moved from run-off feeding to their dry season pattern. The water looked amazing, so my expectations and excitement was high.

It was also the first time that I had got a chance to use my new sounder. I now have a Lowrance HDS16 Live with the 3 in 1 Active Imaging transducer, paired with a 2D skimmer. This setup is absolute mint. Travelling at 50km/h and keeping a hard lock on the bottom depth was so satisfying. And with a little bit of fine tuning, I started to pick up bait and barra everywhere. But that was where the excitement ended, and the frustration started. The 15 other boats trolling over the same fish probably had them spooked. No one was catching anything. 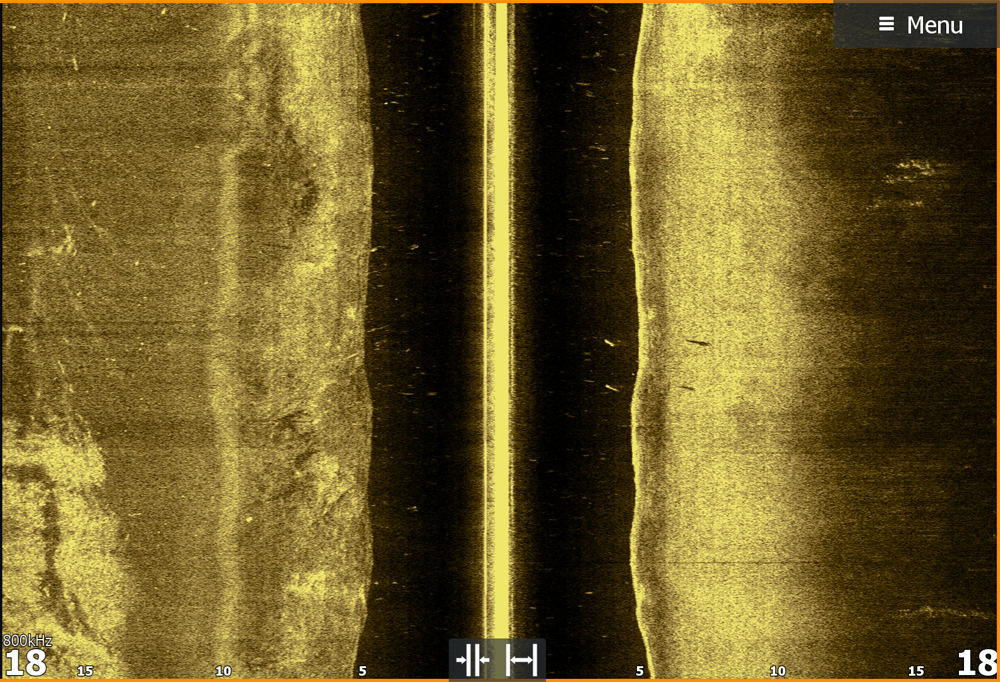 It wasn’t until early afternoon when I got my first barra strike. And let me tell you, it was very welcome. And at 87cm it was a good sized fish to get me off the dreaded donut. It took a liking to the Reidy’s Big B52 in Kryptonite colour. That lure and colour is an absolute barra weapon, and has accounted for many barra on my boat over the years. But like a bear to honey, or flies to the proverbial, it didn’t take long before the Barra Armada zeroed in on the area and started to get a few good fish to themselves. There was probably half a dozen good fish in the 90’s caught, but spread over that many boats, it’s hardly setting the world on fire. Luckily for me, I was also able to snatch another great fish at 95cm. This one fell to the same type of lure, except in the Tropical Thunder colour. And then, as quick as the bite started, it stopped. 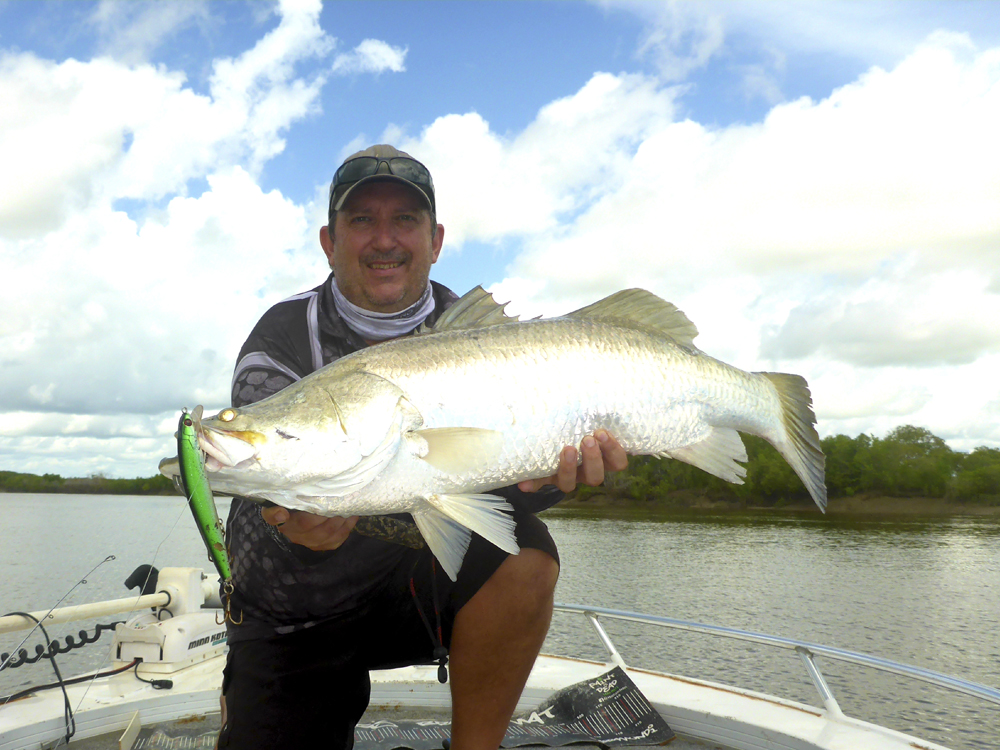 It didn’t take me long before I got annoyed with fishing around the other boats. So I cranked up the tunes, got another cold beer, put the shade up, and started a big troll up river away from everyone to see if I could find fish all to myself. And while this decision didn’t really turn into lots of fish, I was enjoying myself a lot more. Very relaxing indeed. Until I got to a sharp bend about 20kms up river from when I started. The rod buckled over big time and a big fish came clear out of the water.

Netting big barra on your own is very difficult. With the net in one hand and the rod in the other, you need to have the right amount of line out to swiftly pull the barra into the net in a single movement before it feels the net.

Add to that a cranky barra swimming quickly around and under the boat, manoeuvring the boat away from floating logs, banks and snags, the fish kicking away at the last moment, and having exposed hooks that get caught in the net at every opportunity, you really want to make your first net shot a really good one. 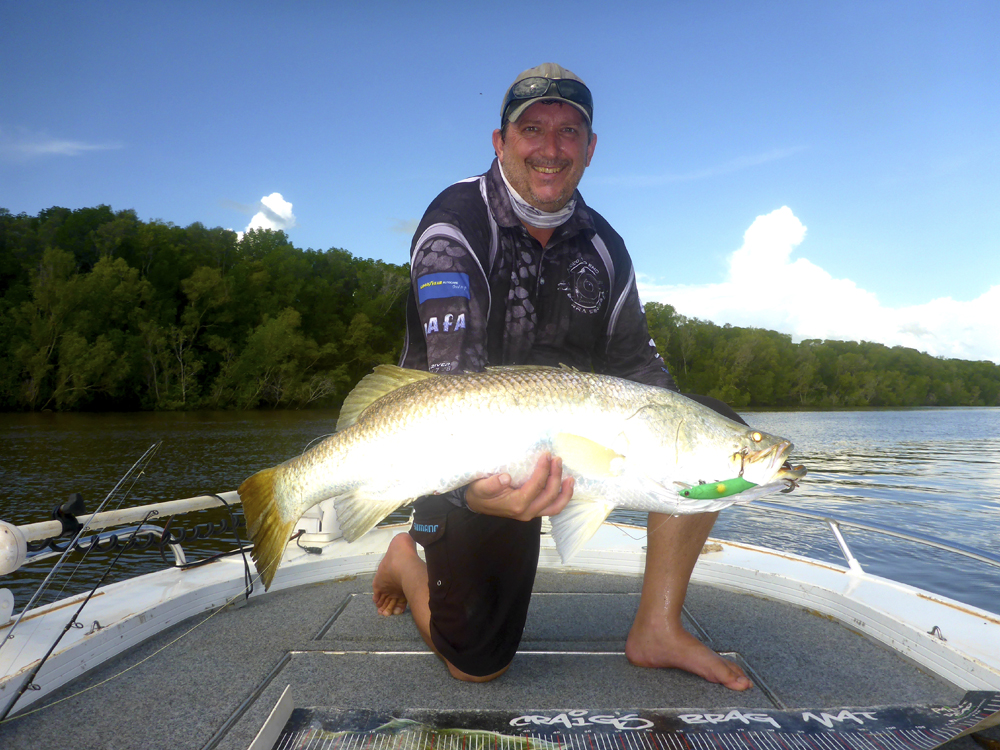 Otherwise, losing the barra is probably going to be the outcome. Now add the pressure that you have just seen a metery jump behind your boat, with your lure in it’s mouth. In this instance I was very lucky to boat my first metery for 2020. I couldn’t wipe the smile off my face.

What made it all more satisfying is that just seconds prior to the strike, I took a screenshot of two big barra. One of which smashed my Reidy’s Big B52 in that Tropical Thunder colour. In fact, all bar one fish, the rest of the barra I caught this trip were on that same lure. It’s quickly becoming a favourite of mine.

The next day was pretty much a carbon copy of the previous. Except that I lost 2 good fish around the other boats. This, together with dealing with boats cutting me off and trolling slower than me heightened my anger exponentially. So I left everyone in my wake in search of fish. And yes, I am becoming a cranky old bastard. Since I got one big fish the previous day on a bend way up river, I thought that this would be a good place to start. Bit of a needle in a haystack kind of situation but it gave me a starting point. 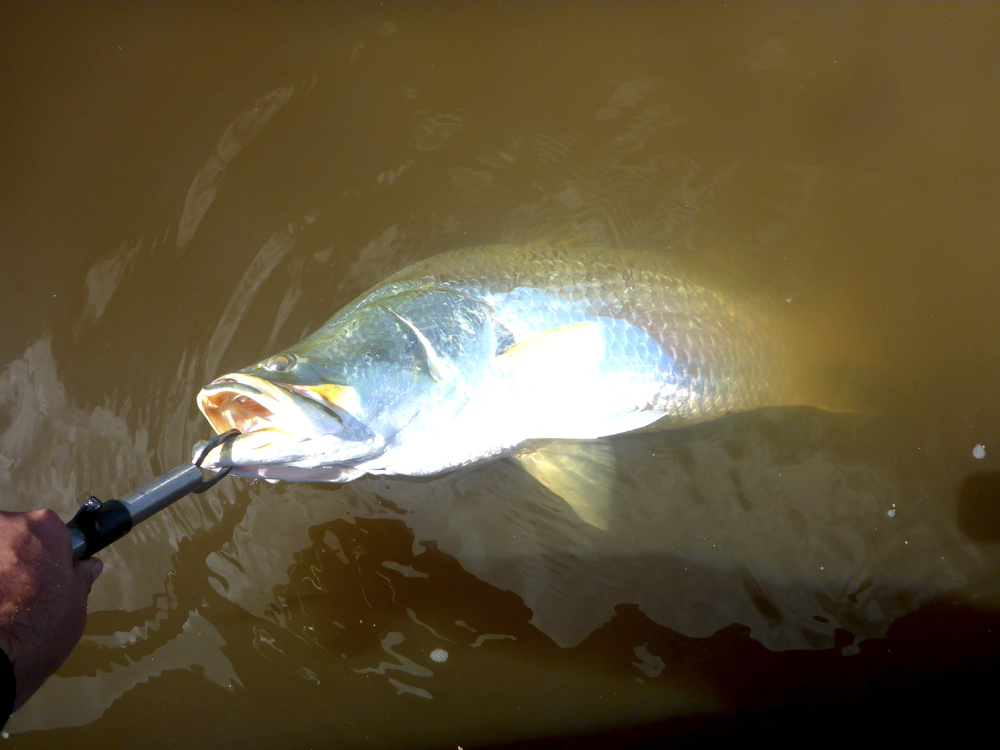 You wouldn’t believe it if I didn’t have photographic evidence. I wasn’t even into the bend and my rod buckled over. And shortly afterwards, I had landed my second metery for the trip. Laughing like my 4 year old daughter I was. I spent the next 30 minutes on that bend for nothing, so kept on going up river.

About 1.5km up river, the floating debris was getting too thick so I turned around to troll back to the “1m barra bend”. I didn’t get 50m, took a screenshot of a big barra and then hooked up. 98cm thank you very much. The next 40 minutes was some of the best barra fishing I have ever experienced. I couldn’t go more than 50m without my lure getting hammered. I landed another 95, 93, 95, 61, 91 and lost 3 big fish in the high 90’s. I was sucking in the big ones. It was one hell of a barra workout. And there wasn’t another boat in sight. Satisfying on so many levels.

If the fish are really on you will get plenty of good fish around lots of boats. But don’t get sucked into believing that this is the norm. Boat noise is a fish enthusiasm killer. Try it next time and leave everyone behind you. It may or may not work. At least you will keep your sanity. I ended up cutting the trip short because the next morning I got a water in fuel alarm. No fish is worth getting stuck in the middle of no where. Plus I had already run out of beer so it was a no brainer to go home. 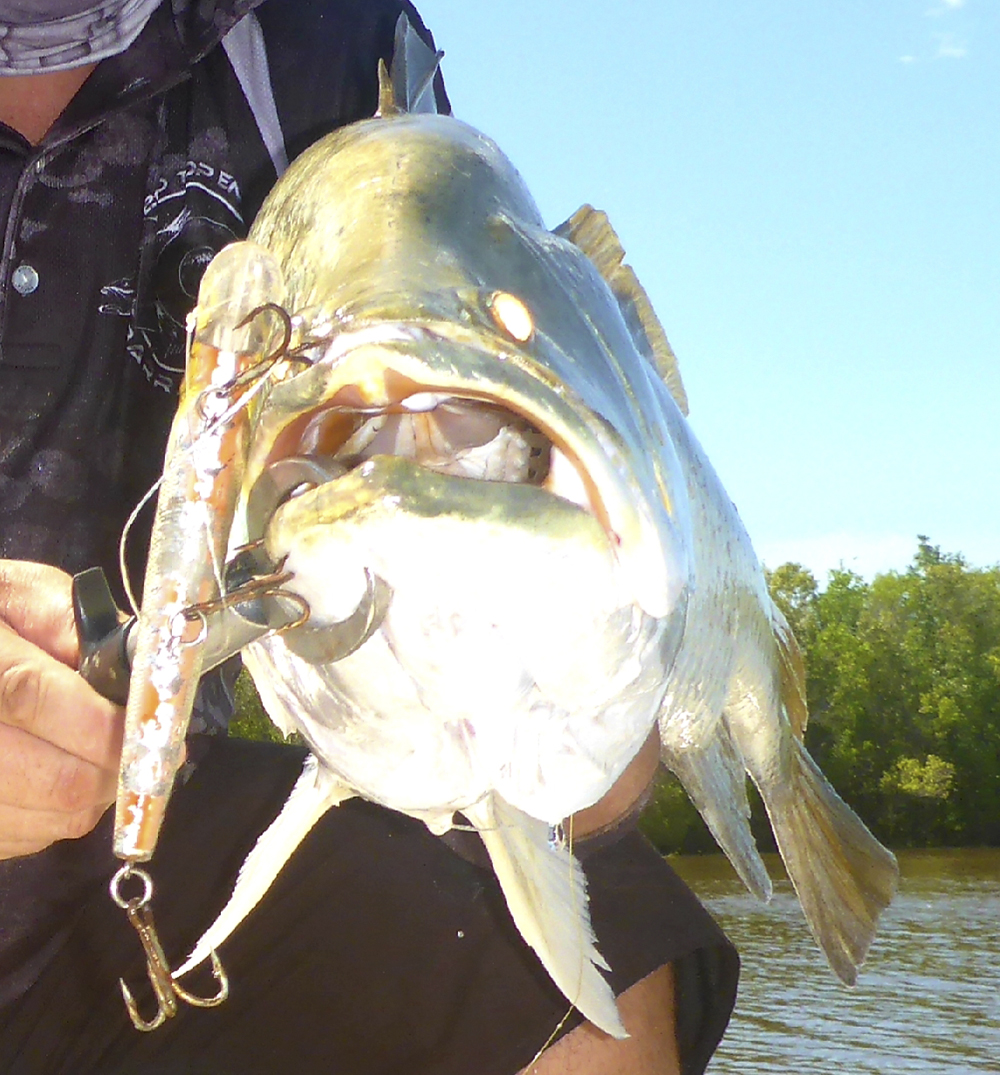