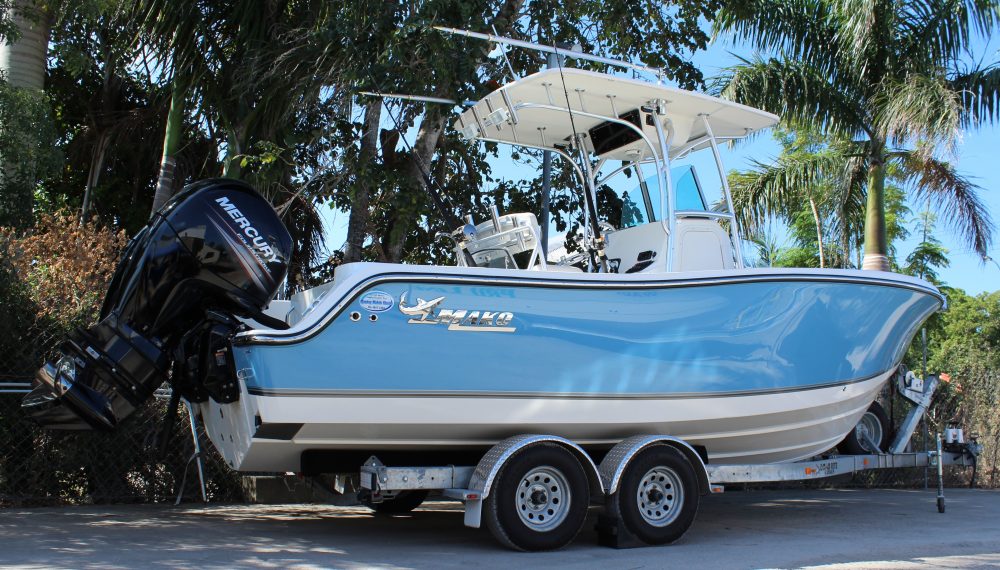 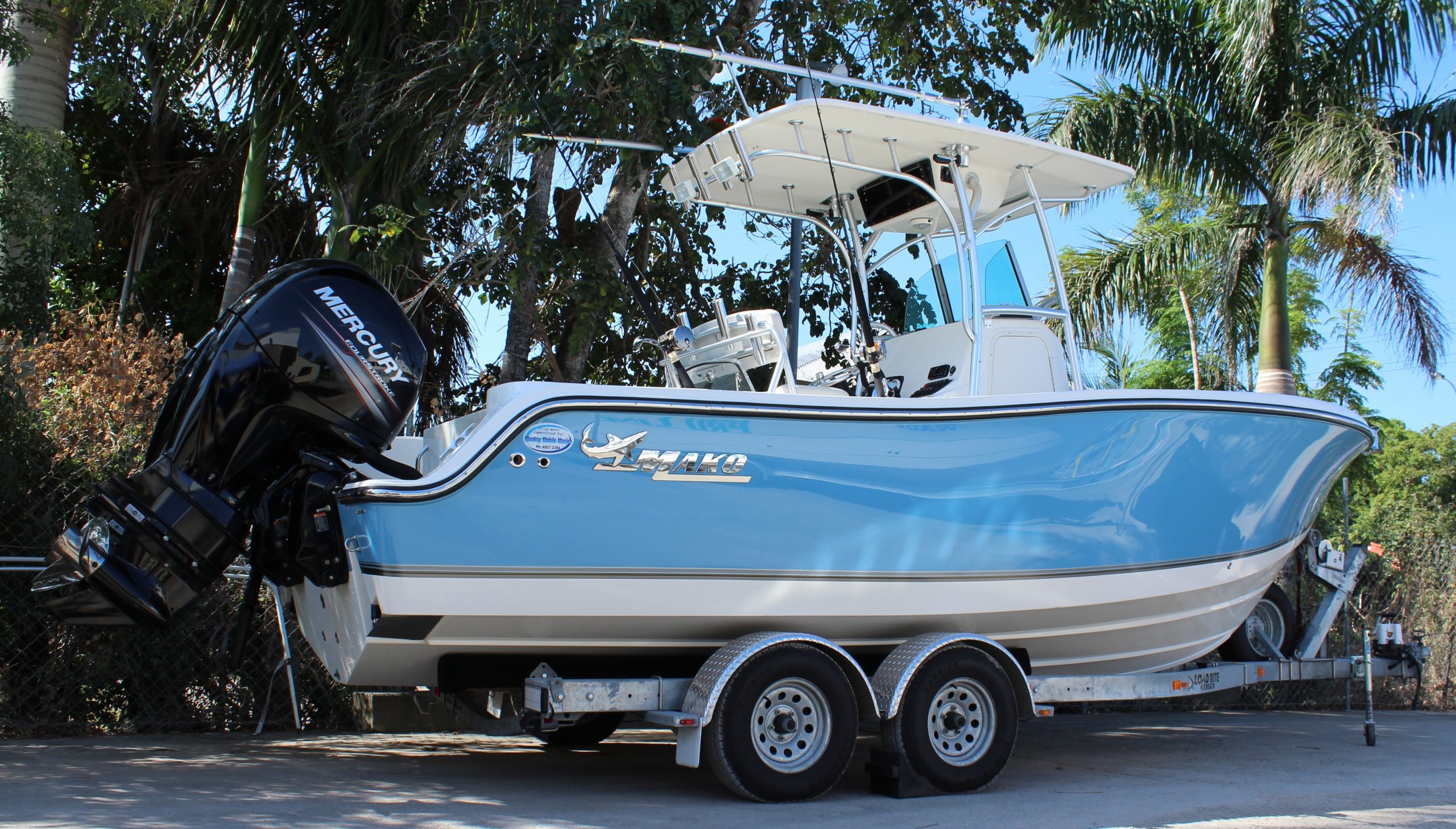 Recently I was invited to put the Mako 234CC to the test following their open day at Mackay Mobile Marine’s new boat sales and servicing complex in Mackay. When you first enter the new boat yard on Evans Ave, there are some awesome toys on display! The Mako 234CC, however, stood out due to its sheer size, build quality and fishing space. So what is the Mako 234CC?

Well, it’s one of the Mako fibreglass range, built by the Tracker Marine Group in Missouri, USA. You may have seen USA imports becoming more common in Australia lately; the larger American market provides more sales for their boat manufacturers, so more money is available and then spent refining these watercraft. When buying an import, be aware some are classed as grey imports. However, you will be pleased to know that Mako boats, as part of the Tracker Marine Group, are now being imported officially with the full lifetime structural hull warranty and an Australian Builders Plate, through their Australian Distributer, Fishing & Leisure Boats. 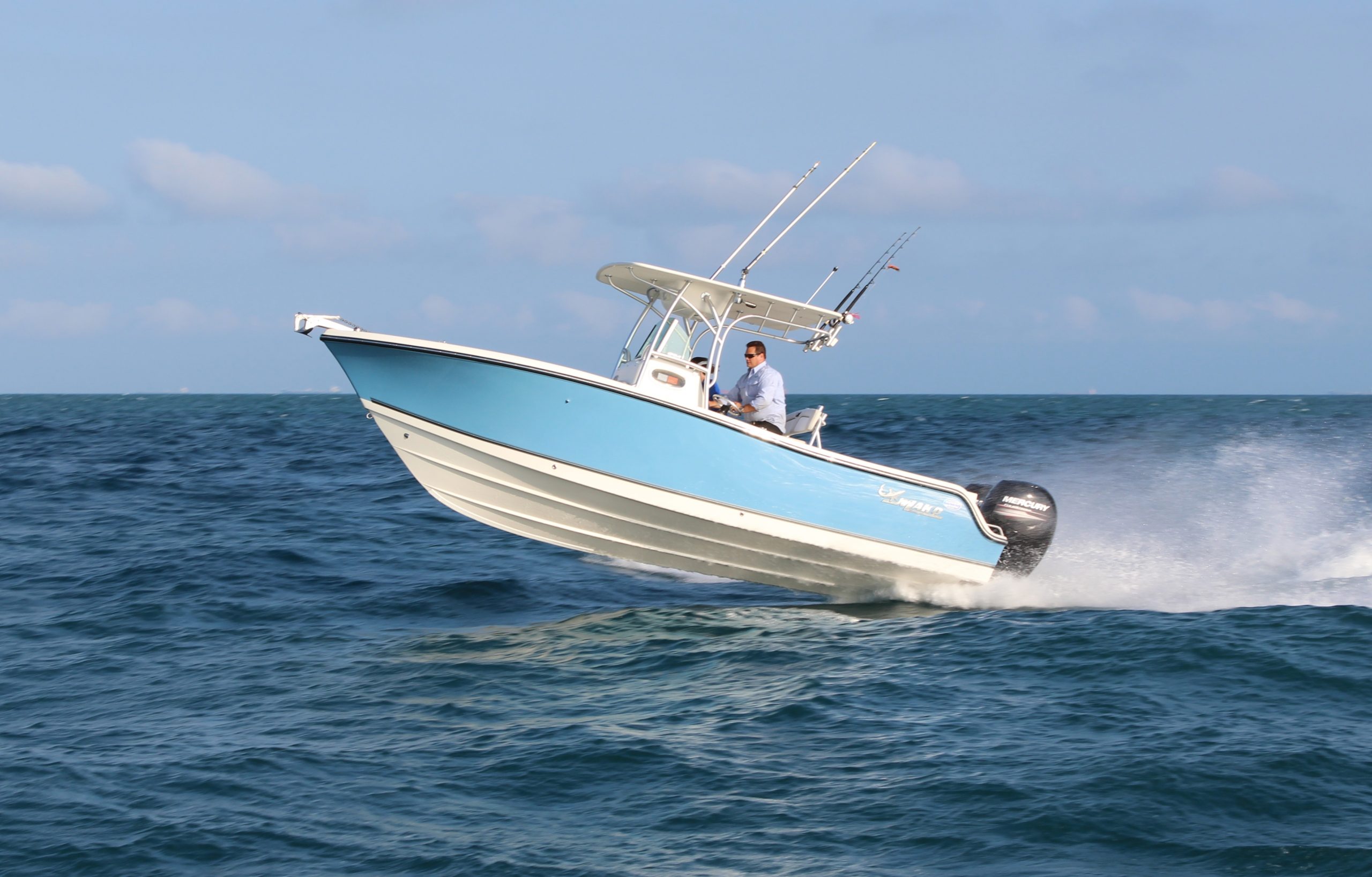 So let’s go for a walk through the features.

Strolling along the side of the boat, the sleek two tone hull upgrade grabs your attention. The 234CC sits proudly on a solid duel axel trailer with electric over hydraulic brakes and comes to a total weight of 3.2 tonnes, including 100kg of fishing gear. So it is capable of being towed by many 3.5 tonne rated four-wheel drives such as the Ford Ranger, Colorado or Land Cruiser. If you’re wondering if you can get it into your shed, when parked with the outboards down and the optional outriggers folded down on the roof, this Mako 234CC is 3.4m tall, 2.59m wide and 8.5m long. 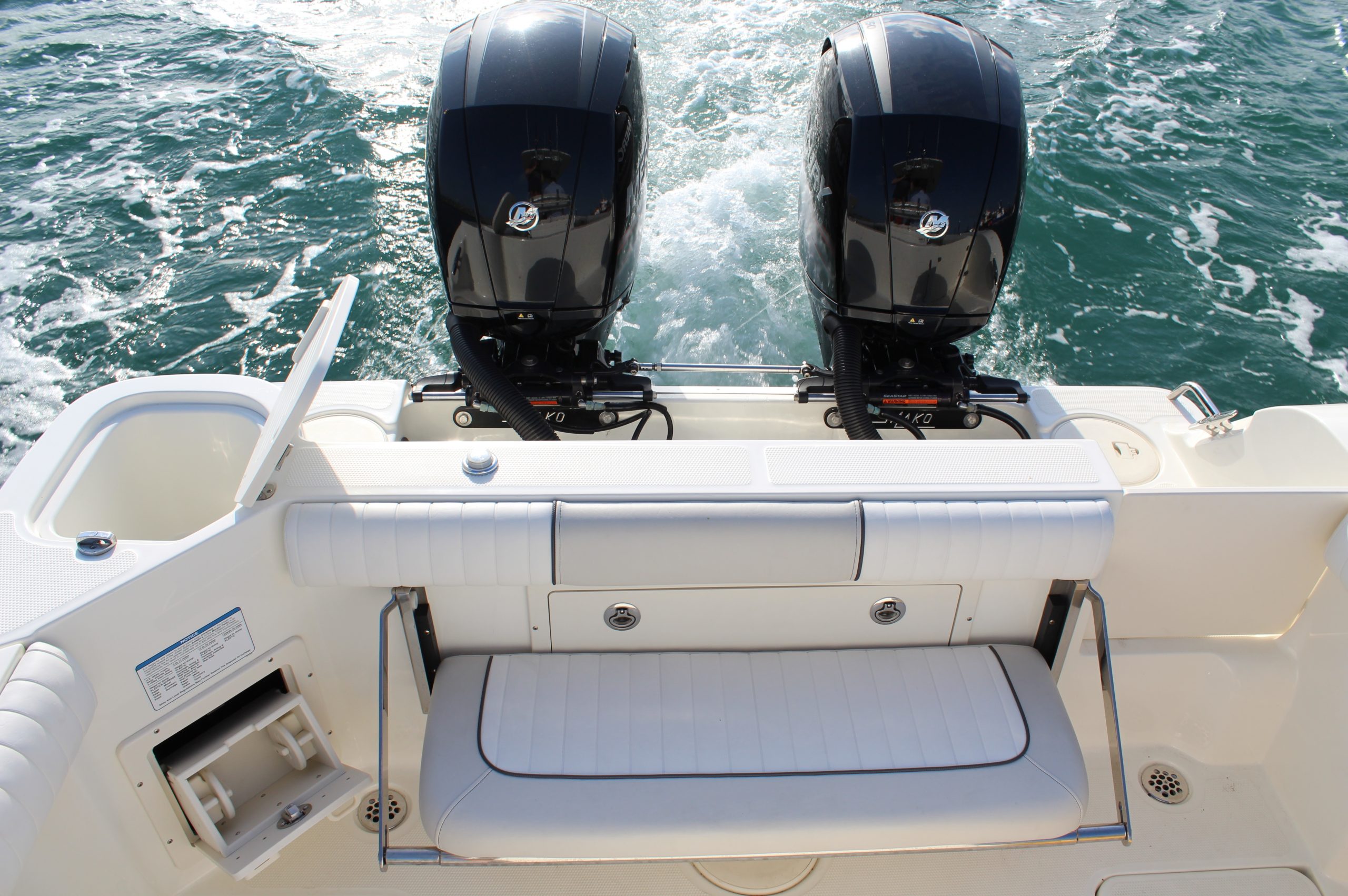 Moving to the business end of the boat, you will be greeted by the latest Mercury Four Stroke technology with matching stainless steel 17 pitch 14.25”diameter props mounted on a solid transom boasting a 21 degree deadrise. These beasts are fed by a massive 515L fuel tank with dual fuel feeder hoses, dual fuel filters and dual batteries for reliability. If you were ever to encounter an engine failure, this boat can get up and plane on one outboard, which sure beats idling all the way back from the reef! While on reliability and safety, the timber-free, foam-filled hull provides positive floatation, and features a self-draining deck with 2x2000G/hr bilge pumps. The steering is taken care of by dual hydraulic steering rams and a stainless link. All this combined gives a nice firm feel and easy steering at any speed. To compliment these outboards, the hull has a neat housing either side for the intelligent trim tabs which automatically return to match the hull profile when the boat is not in use, so there is no chance of them getting damaged in storage.

As you step aboard through the transom door, the sheer size of this vessel begins to sink in. 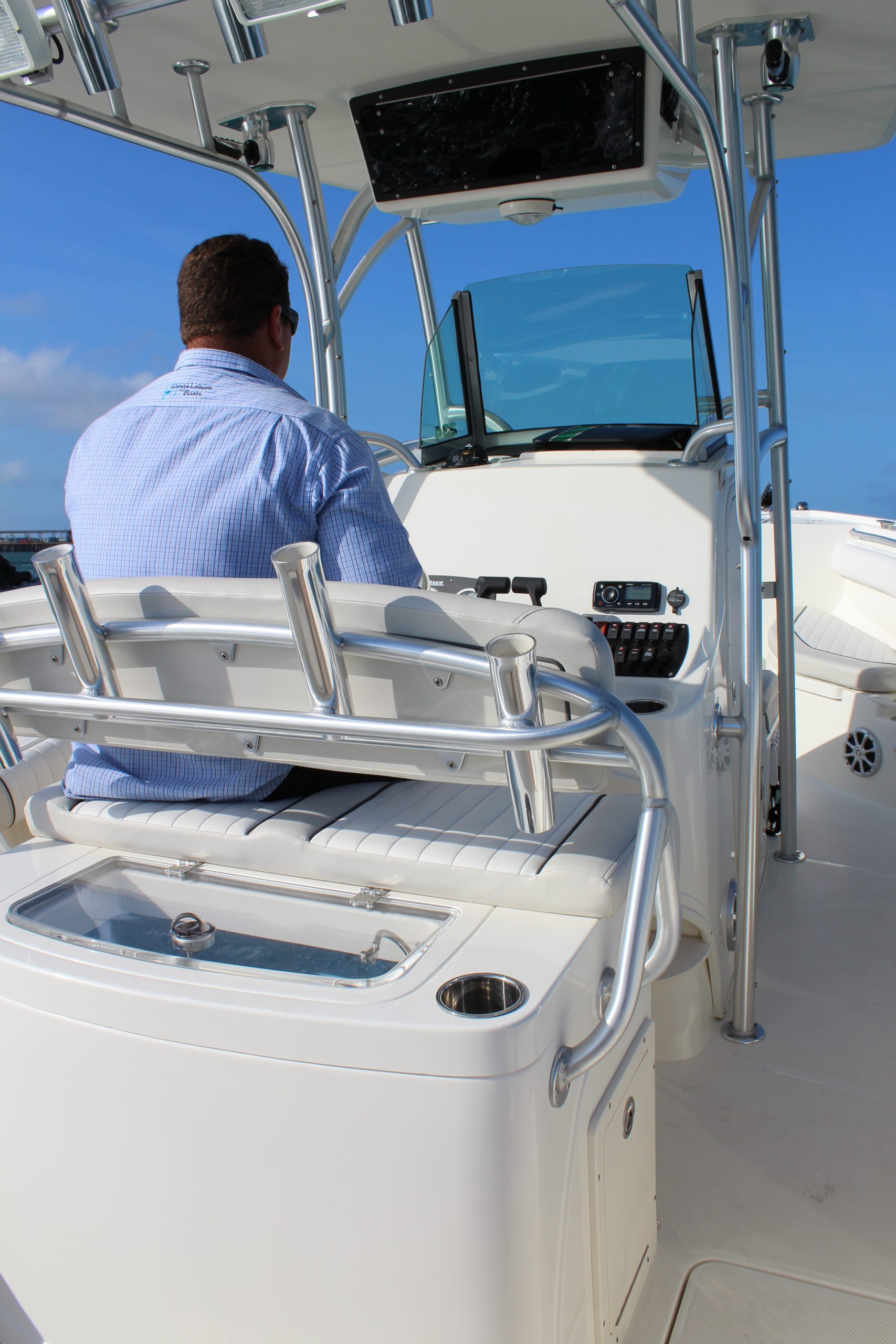 Now that we’re on-board, I just want to point out that I’m 6.2ft tall and was very comfortable under the T-top. The standard T-top is canvas; this particular vessel has the upgrade to a fiberglass T-top and both come outfitted with spreader lights, overhead compartment and rocket launchers. Now for something new, I also had headroom in the toilet. Make no mistake, this is certainly not an on-board potty cramped in a cabin like you see in many boats, but a fully electric toilet with a holding tank and pump out facilities (which is an optional extra on this boat). This is accessed from the starboard side of the Centre Console, making family trips more enjoyable and doubling as a lockable storage area for your expensive fishing gear during transit. This particular boat is also upgraded to the optional full upholstery pack, including the fold down/removable rear seat for those seeking a little more comfort at sea, and a four speaker mp3/ipod compatible stereo system. While we are talking extras, this boat also has the stainless electric anchor winch fitted, with heaps of space for your rope and chain in the anchor well below.

If you’re not 6ft tall, don’t worry! The Mako team have added great little features like a mirror in the door of the console’s overhead compartment, so you can see what’s in there and where it moved to. Now to add to the large overhead storage, there is another glove box compartment built into the dash for any valuables. One thing I did notice is that when you’re looking inside all of these compartments, there are not the typical messy joins and edges that you would find in an ordinary fibreglass boat. Two large storage boxes/seats are moulded around the bow; there is also a massive sealed compartment under the floor between these seats. Around the boat there are rod holders, cup holders, and handy compartments for keeping your tackle and beverages at your fingertips.

Looking under your dri 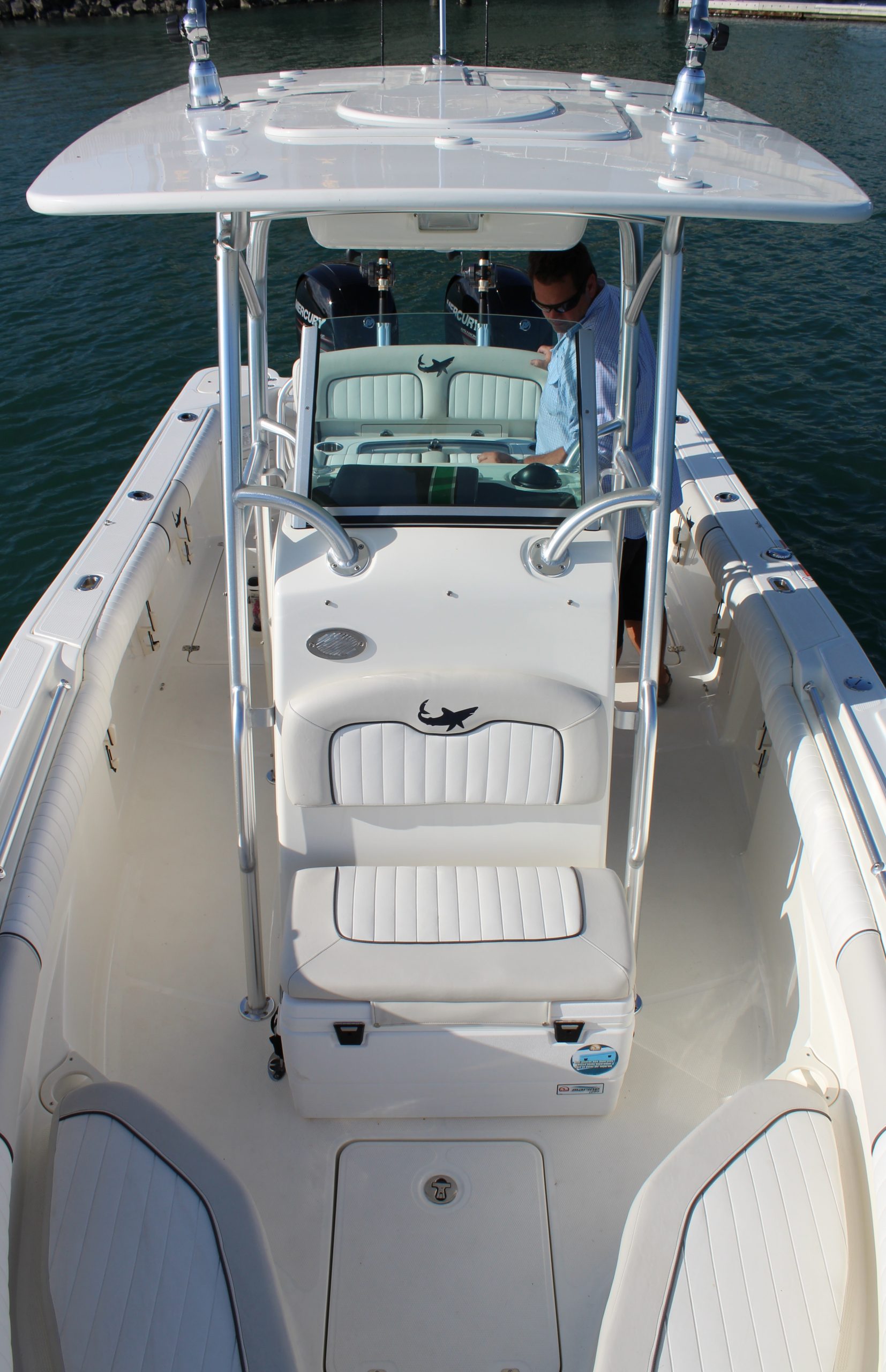 ver’s seat, you will find some handy tackle trays, including knife and lure storage areas surrounding the live bait tank on the back of the seat. Not just any live bait tank though, this large tank can be pressurised to keep deep water bait fish in good condition and can easily be monitored through the clear lid on top. So once you have hooked your fish on your live bait, and pulled it aboard, where to put it? Well, there are a few options. The rear fishing deck has two under floor fish boxes at approximately 100L each, which being insulated by the foam-filled hull can double as esky space. You might decide to move your catch forward to the padded seat, which is in fact an esky, in front of the console. So you may want to clean the fish boxes out? Well, thankfully, the Mako has a saltwater wash down facility and on this vessel as an optional extra, and even has a 30L fresh water shower/wash down hose.

On the water, we put the boat to the test thanks to the afternoon northerly breeze picking up against the outgoing tide. We found ourselves out in a sharp two foot chop and a bit of ocean swell. The first characteristic to grab my attention while grabbing a few snap shots from the Mackay Mobile Marine Pro-Line chase boat is the sheer power of the Mako 234CC with twin Mercury 150hp Four strokes. It didn’t seem to matter what the conditions; there was always instantaneous power available. The second stand-out feature was my favourite; the Mako always seemed to push the spray out and down low, away from the passengers, no matter where they sat on board. As I was about to jump aboard, we were pulling alongside with a following sea and I was surprised to see that as the chop broke on the transom, it didn’t break over the rear step area like it does on many boats.

Once I was on-board the Mako, we went for a run over a few current lines along the marina wall on several angles 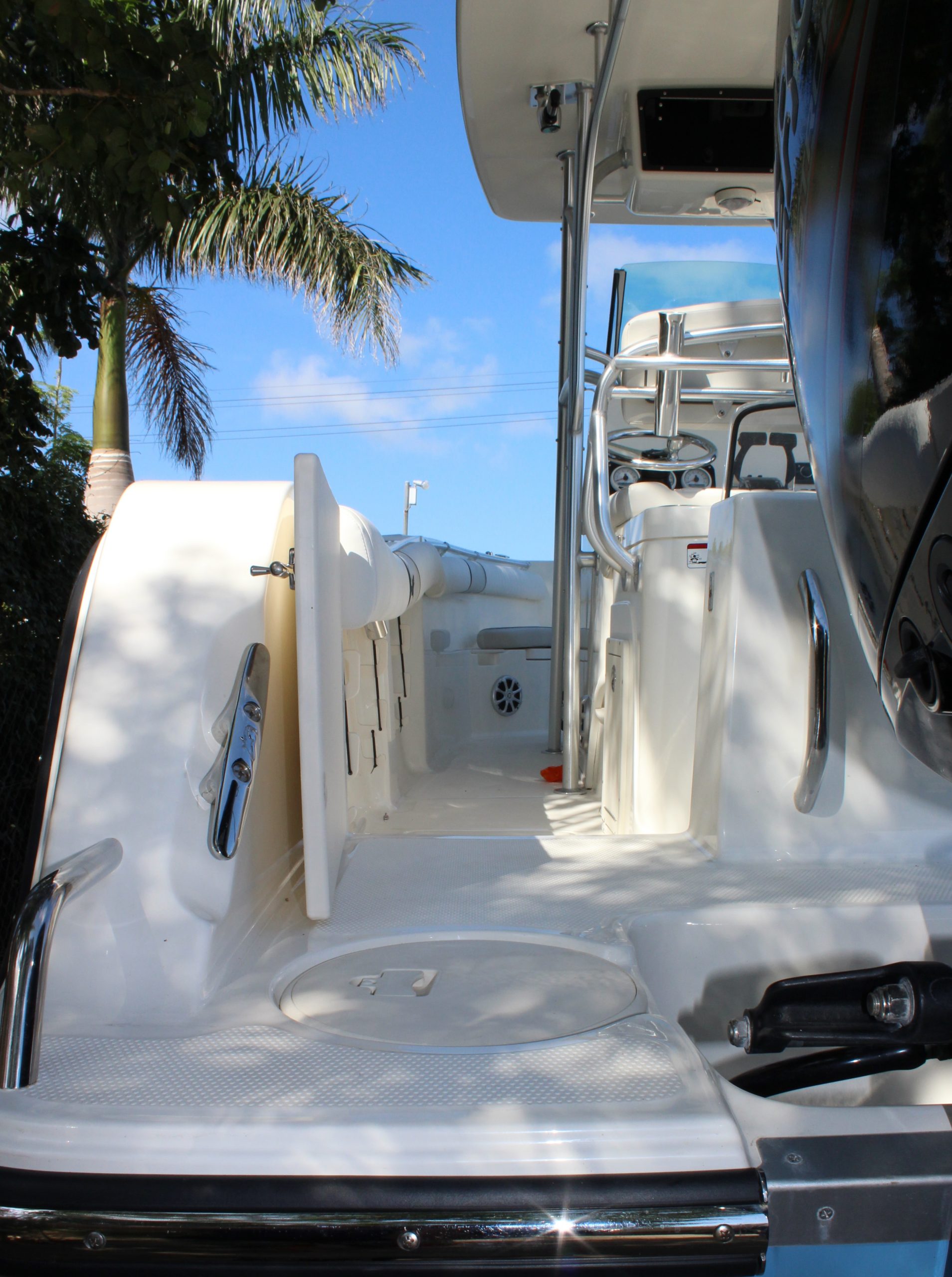 . Riding softly and sitting comfortably behind the console’s tempered safety glass windscreen, I found it to be incredibly dry and I only got a slight splash on my elbow once, which could have been prevented had we fitted the front and side clears option that day. The console was a great, roomy layout with plenty of space for owner specific items such as a GPS, sounder and VHF, which can be fitted on request. I really enjoyed having a drive of such a capable craft. The trim tabs made a massive difference instantly when dealing with different wave directions; there was more power than I knew what to do with; the stability is unmatched, and even turning back to the marina across the swell, the boat handled it all effortlessly! We had a look at the Mercury digital read out and we found the dead slow troll was 3km/hr at 600rpm and 2L per motor (only one motor required), the planning speed was 13km/hr at 2500rpm and 10L/hr per motor. The Cruise Speed in the rough conditions was 33km/hr at 3000rpm and 15L/hr per motor. Finally we managed to push the Mako to a Top Speed of 75km/hr at 5800rpm and 45L/hr per motor with 80km/hr being achievable in flatter conditions. After a drive in this boat, I certainly would recommend it to anyone wanting a reef and island runner that will get you there fast, dry and in comfort. If you were interested in buying this vessel, the 234CC starts from $110,000 BMT with a single 225hp Mercury four stroke and the boat tested including the optional extras already on-board is $150,000. For more information, give Dave Skelt a call on 49572394 or drop in to Mackay Mobile Marinewhere this boat and many others are on display. If you would like some more information about the Tracker Marine Group’s range of Mako Boats, Tahoe Bow Riders, Nitro Bass Boats, Pontoon Boats or Tracker Alloy Boats then check out www.fishingandleisureboats.com.au

Looking back at this boat test, my only regret is not giving the Mako 234CC a full test by running it out to the reef for the day.