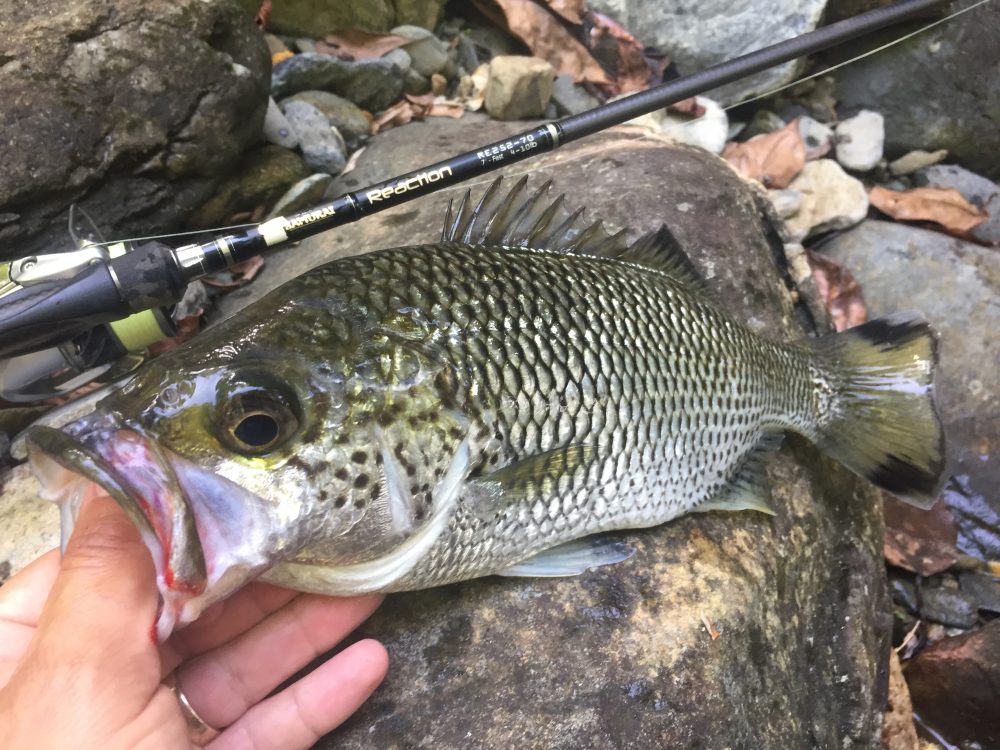 So admittedly, this wasn’t strictly a jungle perch fishing trip to North Queensland per se’.But rather a family holiday that may or may not have been hijacked by my insatiable urge to fish locations where jungle perch (JP) are prevalent. Honestly, who can blame me? Despite being a relatively small fish, their appeal to me personally is significant. Their magnificent markings, willingness to smash a lure off the surfaceand the beautiful locations where these fish can be caught are just a few of a multitude of reasons why they rate so highly on an adventurous anglers agenda.Not to mention, they are quite rare south of Townsville where they still exist in good numbers. Being from Mackay, I don’t get a great deal of opportunity to tangle with them locally. They do exist and I have caught them, but it’s fair to say that they are few and far between, so targeting them is certainly a priority for me when venturing north. 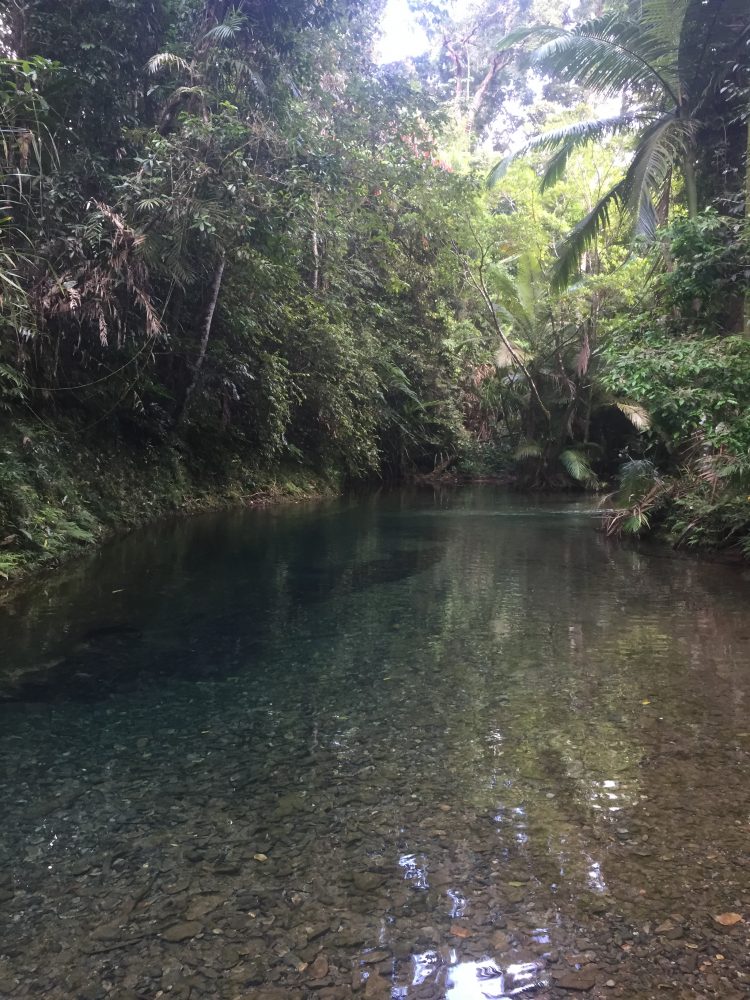 Whilst these downstream pools looked far more impressive, it was the shallower upstream pools that housed more of the fish.

We had actually booked this leave approximately 12 months ago and had it pegged for a trip to Perth, however, COVID screwed with that, so we decided to plan a 10-day, self-drive holiday to Cairns, Port Douglas, Cape Tribulation and the Atherton Tablelands. You know what? I think this was a way better option anyway. Whilst I could have certainly caught a bunch of JP in the Cairns/Mossman areas, and remembering that this trip was largely a “family holiday”, I wanted to use my leave -pass wisely, so I opted to use it to fish an amazing creek north of the Daintree river, around the Cape Tribulation area.

Before I continue any further, it would be remiss of me not to provide a little information about fishing National Parks. In Queensland, there are some National Parks that allow fishing and some that do not, and just like checking the zoning maps when venturing offshore into the Marine Park,

The best website I found when researching the do’s and don’ts with regards to parks and forests with fishing is: https://parks.des.qld.gov.au/things-to-do/activities/fishing#where_you_can_fish. If the National Park you intend to fish is not mentioned here, then fishing in that Park is not allowed. Whilst the Daintree National Park does not allow fishing, I selected a creek that had a 3-4km downstream stretch of legally fishable waters before it turned to National Park, so that upper boundary was the limit where I stopped fishing and retuned downstream again. 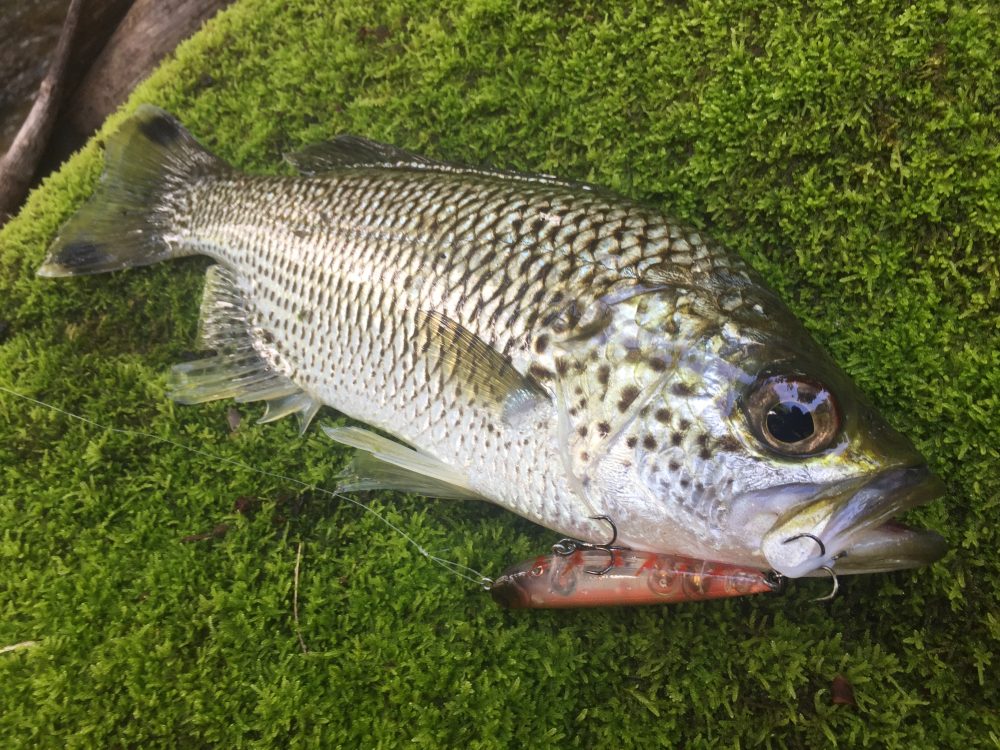 The Atomic K9 Walker (60mm) was an awesome little stickbait to twitch down the waterfalls and rapids to where the JP were laying in ambush.

Late September is a great time of year to venture into the north of our magnificent State. The temperature at that time of year is certainly starting to warm up, but definitely has not reached the blistering heat and humidity that would be present in the height of summer. If you are planning a trip north and looking to trek a sweet water stream on the pursuit for jungle perch or sooty grunter, I would highly recommend doing this at the start of spring. Not only is it more comfortable for the angler but the water levels will also be lower at this time of year also.

Lower water levels in these creeks is advantageous for a bunch of reasons. The most obvious is the fact that the JP’s will be more concentrated and willing to feed. Higher water levels will allow the fish to travel throughout the system and are therefore more dispersed and harder to find. Also, if a fish is restricted to a particular pool or deeper section of the system, there is a high probability that the fish’s food supply within that pool would be scarce. This often leads to the fish engulfing your lure as soon as it hits the water. 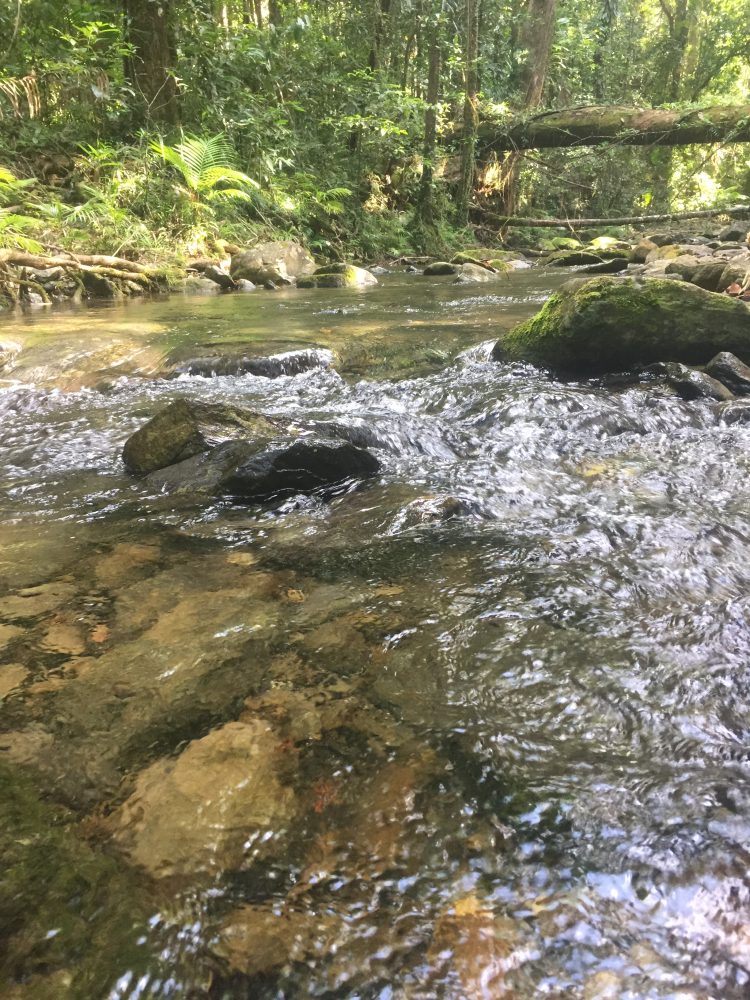 Shallower upstream sections of the creek such as this looked slightly less fishy than the downstream pools, however, did actually contain a higher abundance of fish.

Walking a meandering rainforest stream into the wilderness is exhausting at the best of times, but lower water levels also makes trekking these systems so much easier for the angler. Walking through the rocky base of the creek (which can be done with the lower water levels) is far easier than walking through the vegetation along the edges of the creek. Walking through the vegetated edge is slower, brings with it a greater chance of being bitten by a snake/tick or breaking a rod tip. Creeks across the north will also be prolific with the invasive weed – “wait-a-while” which will literally stop you in your tracks. It looks a heck of a lot like a palm tree but it sends out long runners equipped with large backward facing thorns. This stuff is just plain nasty and has been known to temporarily stop wild animals in their tracks. Give it a wide berth.

Make sure that you wear comfortable footwear with good tread and remember to pack lightly, which means taking one light spin combo. I opt for my 4-10lb Samurai Reaction 252 and 2500 spin reel loaded with 6lb braid and 10lb Unitika leader. Make sure you use fluorocarbon leader in the gin-clear water as it is virtually invisible in water and more abrasion resistant amidst the boulders and rocks than normal mono leader. I like to take a good quality backpack with a few muesli bars, some water, a snake bandage and a selection of small topwater and diving lures, as well as soft plastics. Anything between 40mm and 70mm is ideal for JP. I was using the 60mm Atomic K9 Walker and found an ideal way to work it was to make long casts upstream and slightly work and twitch it down the rapids and waterfalls. Being such a thin-profiled, slender stickbait, the JP just tend to engulf them. 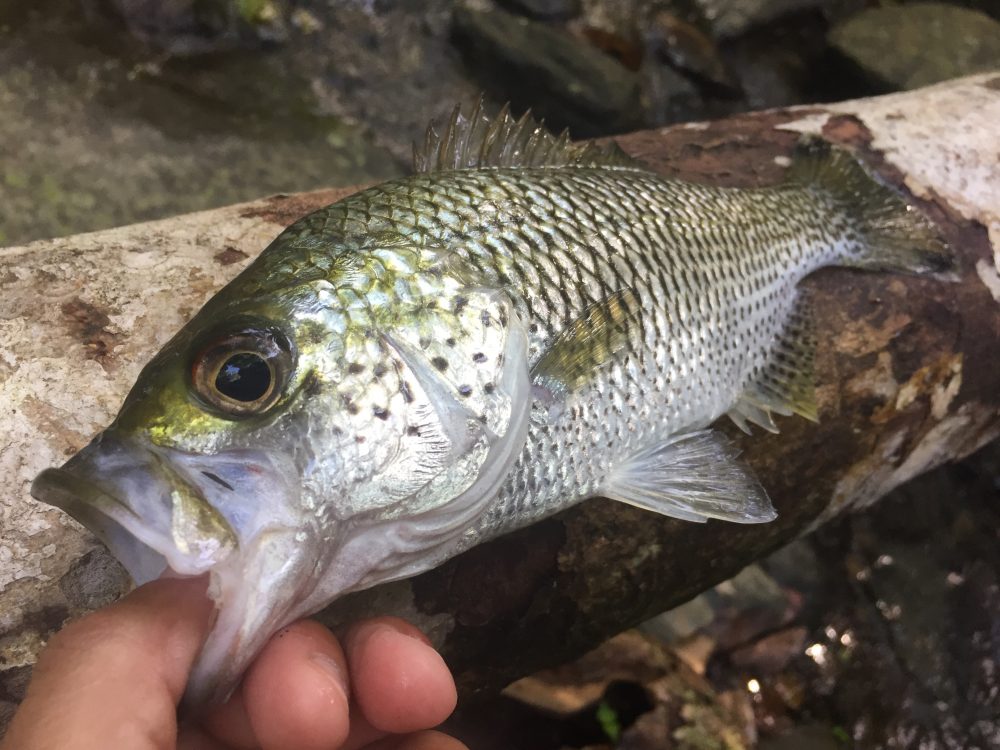 One of the larger fish of the morning.

The morning I ended up being granted my leave-pass was one of those mornings I will never forget. Not just for the fishing but for the experience in general. During the 3hours, I ended up catching 16 JP ranging from 120mm through to 350mm, all of which were on surface. Whilst the deeper, downstream pools looked far more impressive, it was the shallower pools upstream that yielded more fish (clearly the downstream pools see more fishing pressure). Any pool as shallow as 200mm deep is worth a cast as these pools will still have smaller fish in them, even though they will not be particularly obvious. Aesthetically, the stream I walked was one of the most spectacular looking creeks I have ever seen. It really is like another world up there.

Probably, the most spectacular part of the morning was getting within 5m of a Cassowary. I walked around a bend and as soon as I came around the corner, a cassowary was walking from the right bank across to the left bank on a diagonal angle right toward me. I didn’t know whether to run, hide or jump in a tree. I ended up freezing completely, I took out my phone and got some snaps. It ended up walking up the embankment about 5m away from me and walked past me like I wasn’t even there. These birds are a little intimidating and I know they have actually caused fatalities to people before so I’m appreciative it didn’t have chicks otherwise there would have been a higher likelihood of it having a go at me. One thing is for sure, if it wanted to own me than it very easily could have and this would have been a completely different story BUT it wasn’t and I was on such a high. I wouldn’t think too many people would have been so close to a cassowary in the wild before. 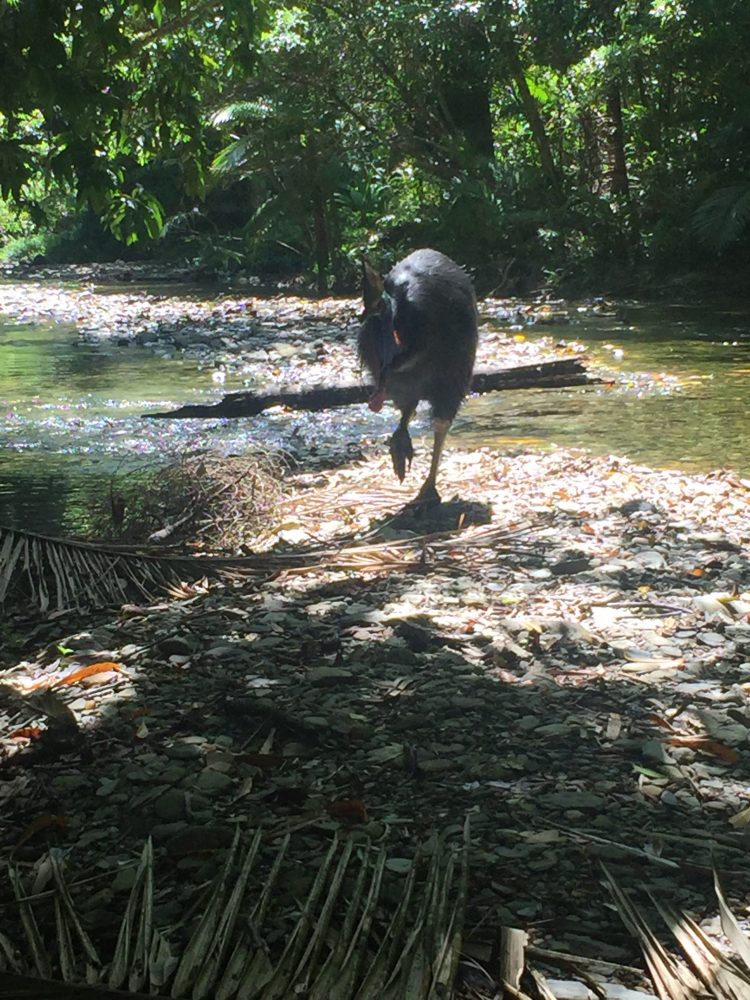 It was such an amazing and awesome experience coming face to face (like literally within 5m) with a cassowary in the wild. Whilst being slightly on the intimidating side, this big guy walked by me like I wasn’t even there – thankfully!

I cracked a couple of beers back at the accommodation which put the icing on the cake of an already awesome morning. Whilst there are many places to stay, we opted to stay somewhere that was a little on the luxurious side, hey, when in Rome right? We stayed at the “Mist at Cape Tribulation”, nestled in the foothills of the World Heritage Rainforest. The owners, Mary and Paul couldn’t have done anything more to ensure we were comfortable and that we enjoyed our stay within our luxury pavilion. Oh and the welcome pack, complete with beers, cheeses and French champagne certainly went down a treat as well!