Getting back into the Groove – By Josh Behrendorff 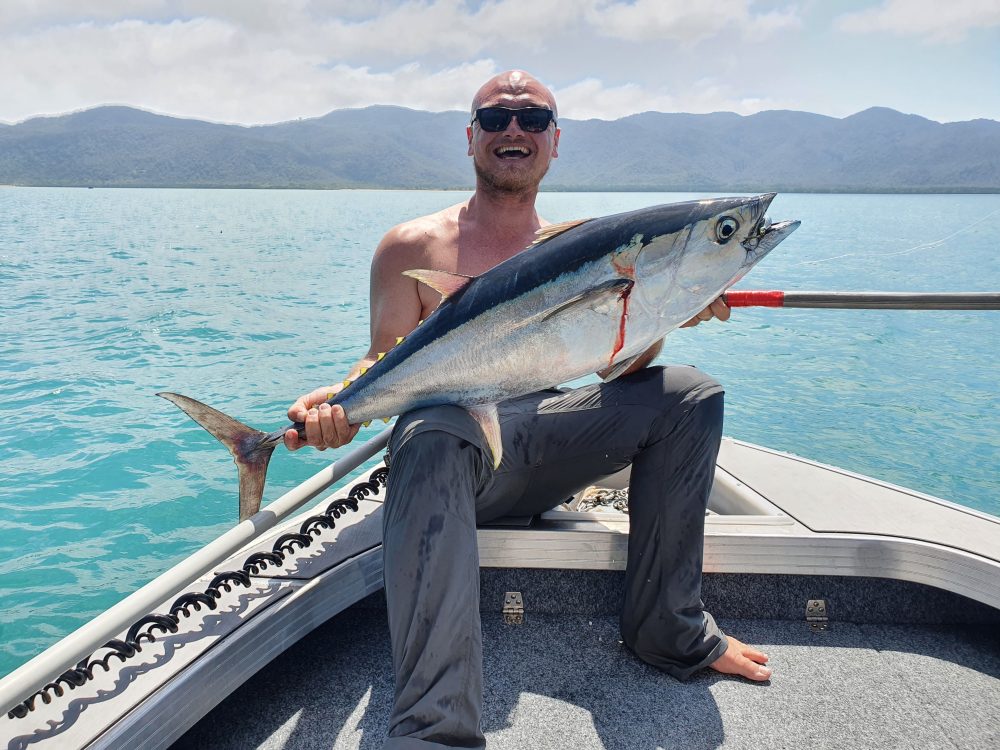 It is starting to seem so long ago, the normality of pre-Covid life. Three years in and I’m still trying to find the work life balance that I enjoyed with regular weekend fishing and camping trips. It’s hard to believe that my boat has only seen the salt water only a couple of times this year and more shocking is that seeing fish on the dinner plate is a rarity in our household.

Feeling so out of touch with what is happening on the local fishing scene makes it tough to try and plan a trip to target any one specific species so when the stars aligned and a small window of opportunity arose to get the boat on the water, we decided to go back to fishing the bread and butter species. Being based in Townsville, that meant finding an inshore rubble patch and soaking some baits in the hope of snagging a couple of good grunter either side of the high tide. This type of fishing doesn’t rely on fancy sounders as these locations are well known and any good tackle store would happily point you in the right direction. 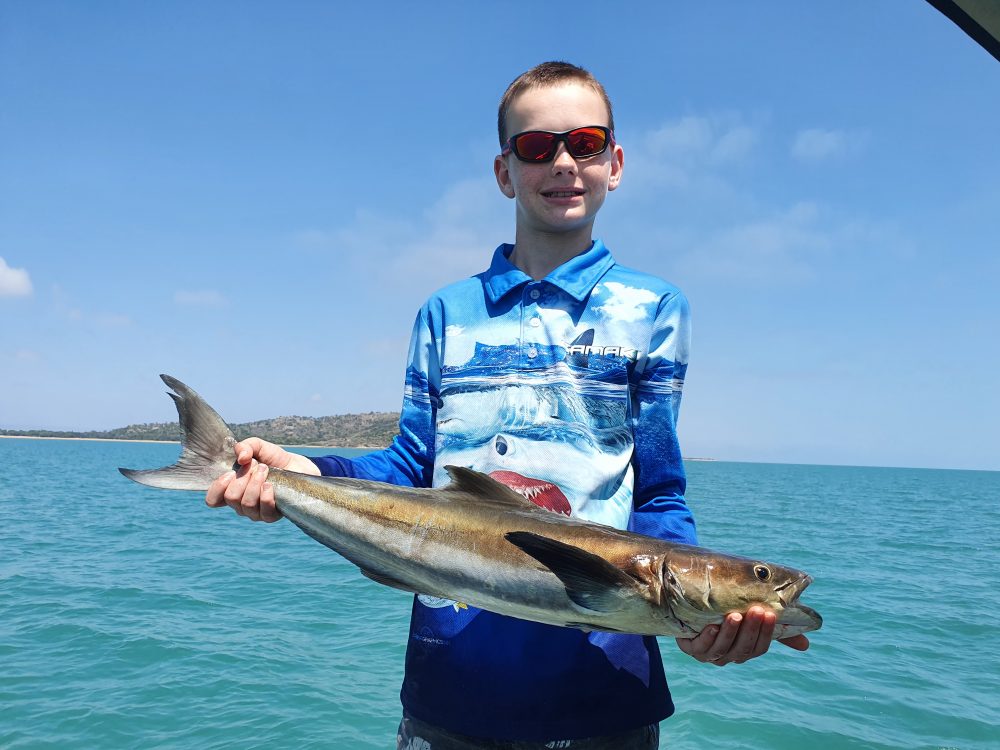 2. Ethan’s cobia was a surprise capture but a welcome addition to our dinner table.

Arriving to the not so secret spot, the sounder didn’t reveal anything too impressive other than the rubble bottom. This is a reasonable sized area so there is no precision required when anchoring which was good considering wind against tide conditions. The family were quick to sort out the rods and rig up half pilchard baits on the snelled 3/0 circle hooks and get the lines into the water while I took on the host duties to organise the drinks and nibblies. To be perfectly honest, after being off the water for as long as we have, it was great to just be back on the salt and briny. The sun was still reasonably low in the sky so the bimini was creating very little shade, this meant that my wife and two children were all sitting on the back corner of the boat, the only corner that actually had some shade. Fortunately for me the first rod to go off was next to me, on the non-shaded side of the boat. As soon as the drag starting peeling off the small Shimano Stradic, it become immediately obvious that my fishing reel needed a little TLC. The drag wasn’t smooth and the roller bearing was making an awful noise. It soon became apparent that this mystery fish was far from our target species, as it headed off towards Magnetic Island at a very steady throbbing sort of a pace. The mystery fish was far too heavy for me to dictate terms and I was left as a passenger watching the line disappear at a steady rate of knots. This was an unstoppable fish that I’m presuming was a large stingray and I for one of the first times in my life, was praying for one of my knots to fail to end the pain. During the drawn out fight my daughter Amelia also hooked up and soon landed a nice sized grunter that was thrown straight into the ice box after a perfect net shot from my wife. 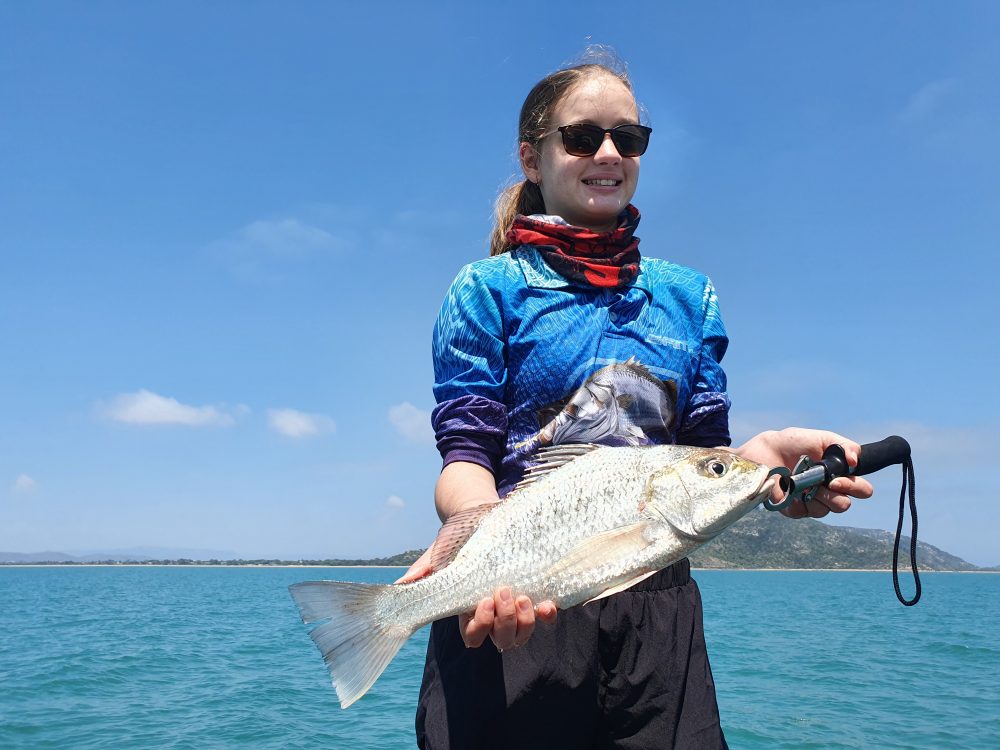 1. Amelia’s grunter was no record breaker, but it was a great fish to start the day off.

I was still being stretched on the other line when the third rod took off and my son hooked up to a more erratic fighting fish. From my view the fam all had it under control right up until they caught a glimpse of the long grey silhouette in the water and they yelled at me “Dad it’s a shark, HELP!” At this point I lowered the rod tip, looked the spool up with my hand giving my best attempt to snap the 20lb line so I could offer assistance. I continued to try and break the line off to the submarine, slowly dragging the boat against the direction of the tide while Ethan’s fish took off for another hard run. After close to 40min I finally snapped the line giving me time to lend assistance for my son to land his hyped-up cobia.

As the tide turned, the fishing shut down and never really fired up again. We were quite satisfied with our feed of fish in the esky so we decided to rig up two small trolling lines and drag some lures along the current line while we packed up the boat and washed the bait board down. I was hoping to hook up to a late season grey mackerel. It wasn’t looking likely as the boat was cleaned up and I was scratching at the bottom of the barrel to find excuses to remain on the water when the lure was finally intercepted by an underwater missile.

I don’t think I have ever seen or heard a strike quite like it, the rod buckled over almost jumping out of the rod holder as the line screamed off in an unhealthy ‘reel needs maintenance’ kind of a way.

My wife carefully took the rod out of the rod holder as we decided we were going to have to chase this fish down. We began reversing up on the fish yet still couldn’t make the ground so we decided to carefully navigate the line around all the poles from the bimini so we could fight the fish from the front of the boat. 10minutes in and Faith was ready to hand the baton on, the kids ran in the other direction so I stepped up to the plate to take on the underwater torpedo. It would have been easily another 15min into the fight before we even got a glimpse of this fish as the large long tail tuna porpoised out of the water in a tarpon like fashion before going deep and dogging it out under the boat. By now the blisters had started on my hands and fatigue was really setting in as we really struggled to get the fish boat side to land it. The tuna circles just went on and on despite our efforts of driving off the fish or muscling it up, we had to be painfully patient. The gear we were using was well and truly under gunned for this David and Goliath type battle. The rod was a light 3-6KG graphite spin rod with a Stradic 4000, 20lb braid with a 20lb fluorocarbon leader and my tiny little Tilson barra 80 lure. By the time I eventually had half a chance of landing the tuna the blisters on my right hand had well and truly busted. I passed the rod back to my wife who was doing a stella job on the steering wheel so I could lean down over the bow and try to tail the fish. The saltwater stung my hand as I underestimated the true size of this fish and struggled to get a solid grip of the tail. In slow motion the fish painfully slipped through my fingers as I jumped back to try and grab the rod ready for the inevitable run from the fish. It was another 10minutes before we could get the fish close enough for another go.This time I wasn’t taking any chances and with the gaff in hand the fish was soon heaved on board. At this point I could see the fish had more energy than I had left and proceeded to shake my bones to bits while also spraying blood from one side of the clean boat to the other. 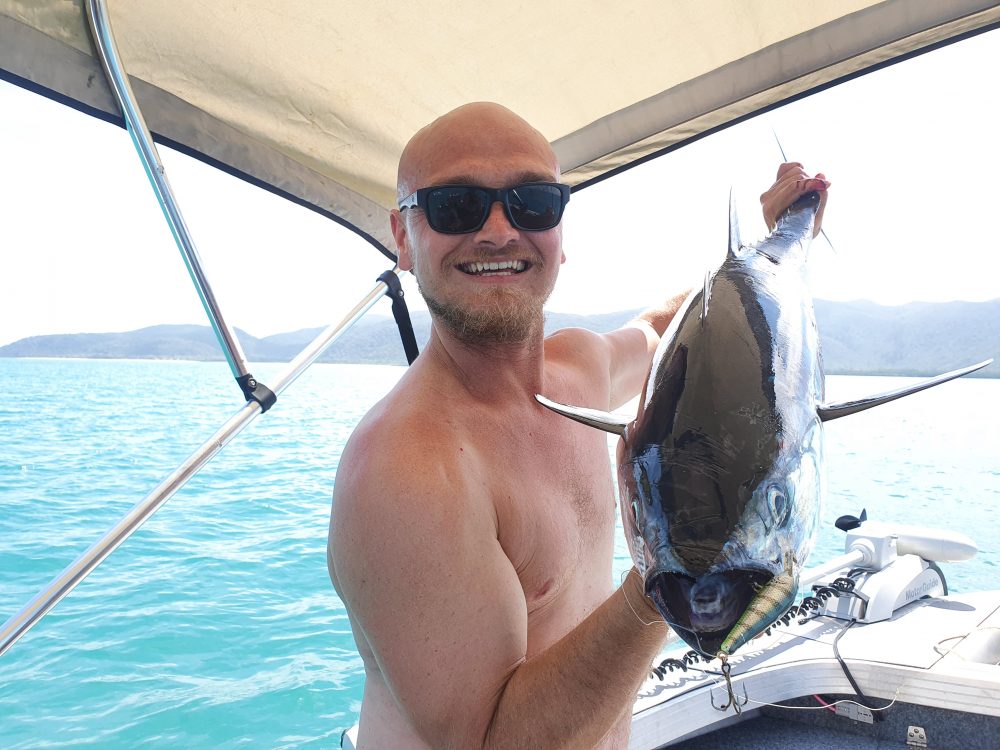 1. Incredibly, this large torpedo like longtail tuna fell victim to such a small lure and the hooks didn’t straighten.

While we removed the hooks and processed the fish the surface activity begun to increase, yet after a quick chat with the family it was a unanimous vote to head home as we had more than enough fish for our family for the time being. Until next time (which hopefully isn’t too far away), stay safe and tight lines.