The Peron Islands in a trailer boat – By Chris Errity 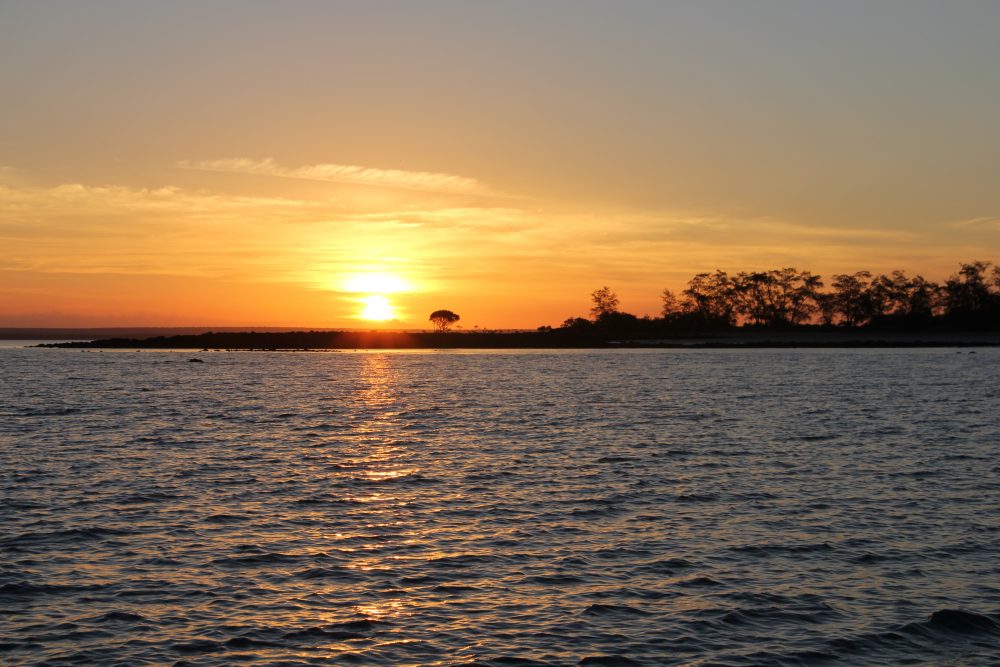 For many years I have enjoyed fishing the pristine waters of the Peron Islands situated near the mouth of the Daly River in Anson Bay. There are two islands in the group (the North and South Peron) and they are Aboriginal land so access to them is not permitted without acquiring a Northern Land Council permit. The smaller South Peron Island lies about 2 km to the southeast of the larger North Peron Island. The two are separated by a very shallow channel that is exposed during a spring low tide. The northern narrow tip of the north island has the distinguishing feature of a relatively tall round hill that can be seen from as far north as Point Blaze at the southern end of Fog Bay, or approximately 20 kilometres away on a clear day. There is also a prominent pelican rookery on the North Island. The islands are uninhabited. 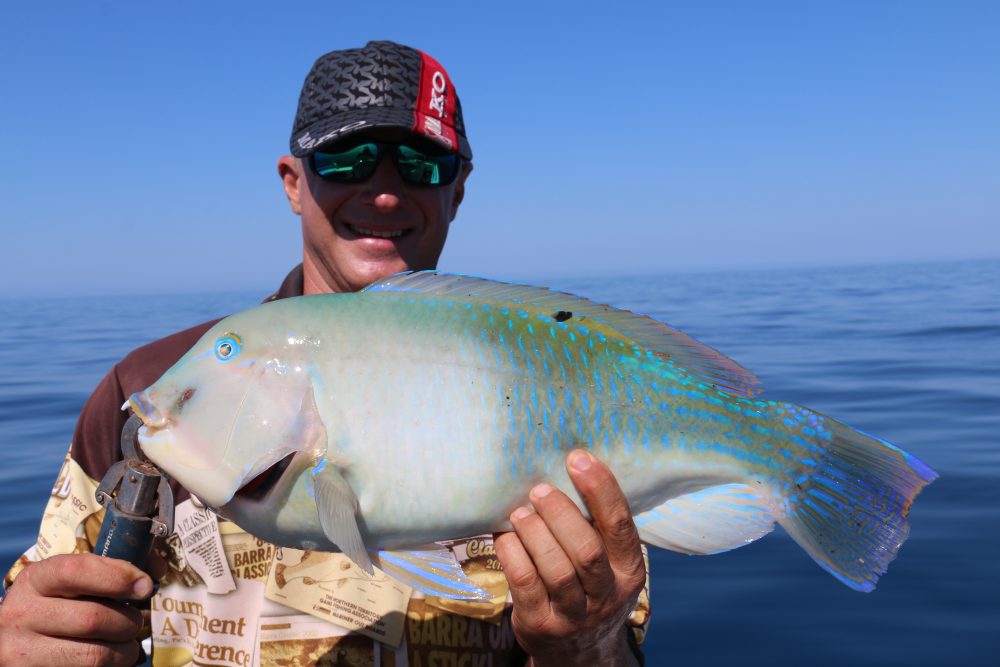 The waters around these islands are teeming with marine life mainly due to the nutrient rich waters entering Anson Bay from the mighty Daly River. During the Wet season when the Daly is in full flood, tannin coloured fresh water often pumps out as far as the Peron’s. They are easily accessible in a trailer boat from the public Dundee beach boat ramp which is about a 90 minute drive south of Darwin. They are only around 55km to the southwest of the ramp or a 90 minute boat ride along the coast if the conditions are favourable.

The Peron’s can also be accessed from the Channel Point Coastal Reserve boat ramp that can only be utilised through a permit system. These permits can be organised by contacting the NT Parks and Wildlife Commission on (08) 89994555. Be aware that only 10 cars are permitted at any one time to visit this coastal reserve so book ahead well in advance to gain access. Channel Point Coastal reserve is located 240km southwest of Darwin and it takes around two and a half hours to drive there. It is only around 5km out to the islands from this boat ramp.

There is a plethora of species available to the intrepid angler when fishing this area. Popular reef fish species such as golden snapper, red emperor, coral trout, black jewfish and blue tusk fish are common around here and are heavily targeted by many anglers due to their exquisite eating qualities. They also all fight well with the black jewfish being a particularly large and tough fish to land. There are also plenty of popular pelagic species such as Spanish mackerel, trevally, Queenfish and longtail tuna that are regularly encountered in this area along with sailfish and black marlin. 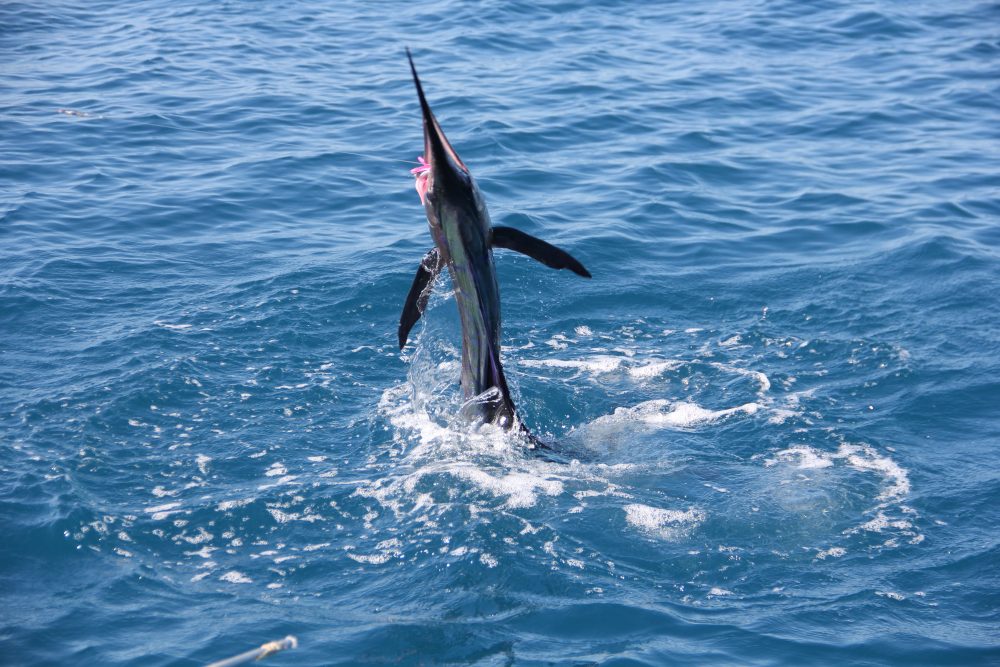 A vigorous sail tries to shake the hook. Sails are great fun to catch and often put on a spectacular display when hooked

Reef fishing is probably the most popular method of recreational fishing off Dundee and around the Peron Islands. It is not uncommon to see 100 plus boat trailers in the car park at the Dundee ramp on the weekends particularly when the weather is good. Most anglers head up to at least 20km off the coast to target reef fish. Even here the water depth is only around 20-25m. Most anglers prefer to use fresh bait, but others are opting for soft plastics such as gulps and various types of vibes. Metal jigs can also work well at times.

When targeting reef fish it is important to use a good sounder so you can find hard bottom where the fish are congregating. Good sounders these days will pick up fish schools on the bottom as well. Many anglers now use side scan on their sounders as well as they can pick up the ground and presence of fish well up to 50m either side of the boat. I personally use a Humminbird Solix 12 unit and have found the side imaging particularly useful in picking up subtle ledges in the reef where fish can often be found in good numbers.

The use of electric motors have become very popular also when reef fishing. I use an 80lb Minn Kota electric which uses GPS positioning to spot lock my boat exactly where I want it to be when targeting reef fish. I prefer to use soft vibes and gulps when reef fishing and have not had a problem landing most species when using them. Coral trout love soft vibes and I have had great sessions on them landing up to a dozen a day when using them. Black jewfish and golden snapper also respond well to vibes along with blue tusk fish and grass emperor. 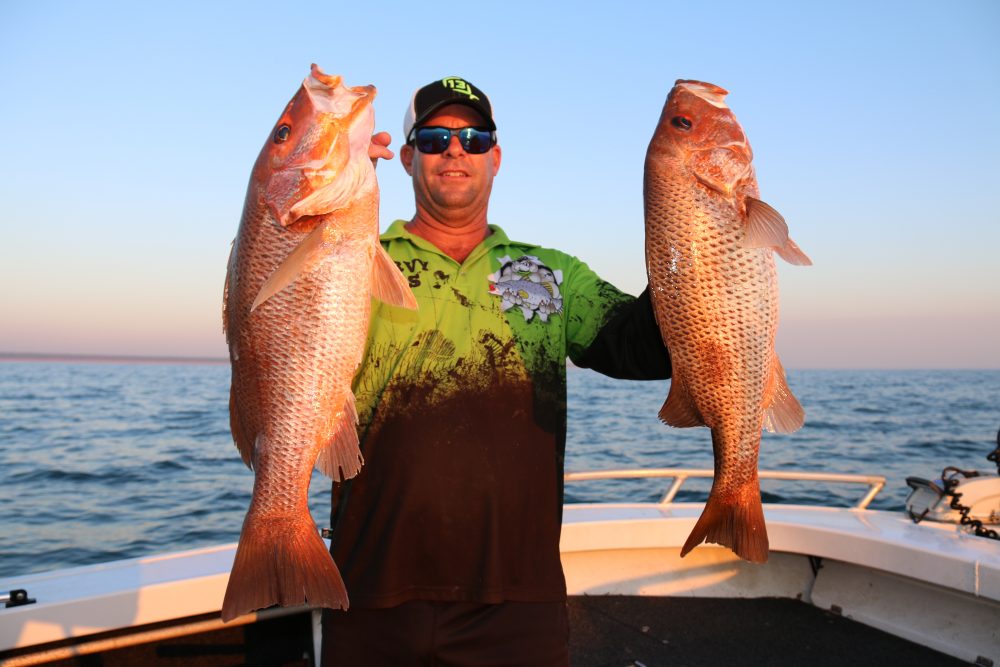 A double header of massive goldies. These are my favourite eating fish in the Top End

Spring tides seem to work better when reef fishing around the Peron’s. The reef fish species become more active and feed voraciously when there is greater tidal movement. This area can experience up to 7m of tidal movement and the pelagic species also seem to feed better during the spring tide phase. However,

I have found that targeting the spring tides a few days after the neap tides is the best time to target pelagics. The tidal movement increases just after the neaps, but the water clarity is still good, which is important when chasing these species as they often hunt by sight.

The Peron’s are well known for their prolific pelagic species. One of my favourites to target is the Spanish mackerel. Not only are they great sportfish obtaining sizes of well over 1.5m in length and weighing up to 35 kg, but they are also good eating. Spanish mackerel can be targeted trolling large minnow lures or by jigging metal slices. They often sit deep in the water column and so trolling deeper diving lures such as the Nomad DTX minnow can be extremely effective. These lures dive up to 30 feet on the troll. However, sometimes this is still not deep enough and so dropping metal jigs down to the bottom is another way to catch these fish.

Metal slices and jigs also work well on longtail tuna, various trevally species and Queenfish. Often you will come across huge schools of these fish species feeding voraciously on massive schools of bait fish when heading out wide off the coast. Sometimes they even feed together and work amongst each other to herd up the schools of bait fish. When chasing these species it is important to match the hatch and use lures that are a similar size to the bait fish they are feeding on. Often the bait fish are quite small around 3 to 5cm in length. In these cases I find using metal slices around 30 to 40g work well.

Queenfish and trevally also respond well to surface lures. This is my preferred method to chasing them as it is also visually stunning.

Watching these pelagic speedsters chase surface lures in schools is something that every angler should experience. The explosive surface strikes are second to none.

Queenfish are also well known for their acrobatic displays once hooked up. There is a massive sandbar between the two Peron Islands that is home to a resident school of monster metre-plus Queenfish. The water around these sandbars is just about always clean and so hunting for these fish is usually easy as they can be readily seen cruising in the shallows. Once you have found the school simply cast your surface lures in front of them, retrieve them at speed and let the fun begin. Queenies are insane sportfish and perform even better in the shallow water surrounding the sandbars. 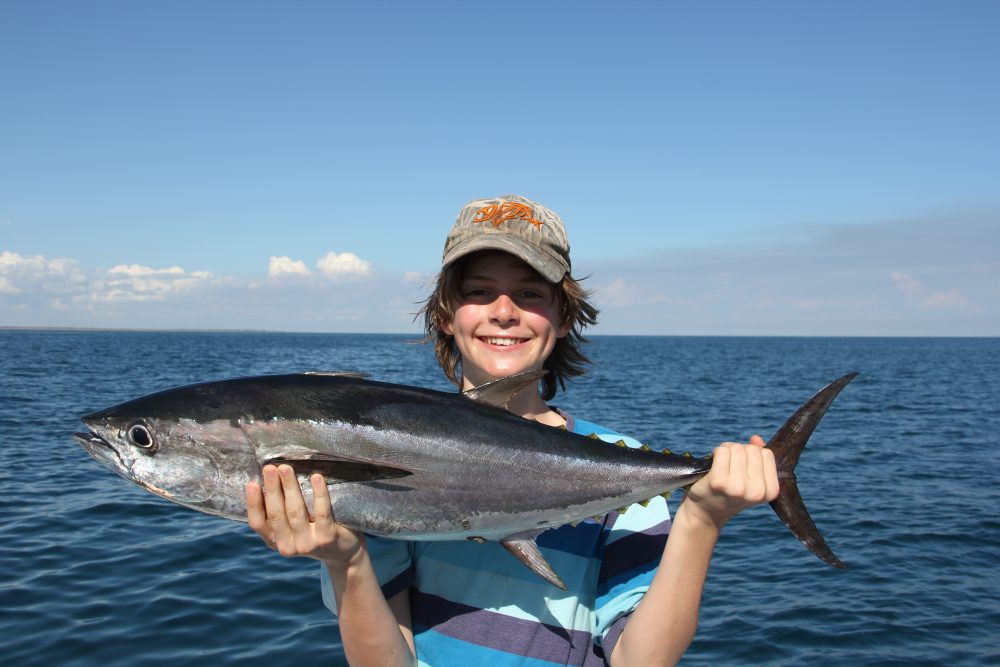 Billfish have now become very popular to target offshore in this area over the last few years. They are usually encountered around 20 to 30 km offshore. It is not uncommon now to head out wide and see up to 20 boats chasing these amazing fish. The sailfish are much more common in this area and can often be found in large pods of up to 20 feeding fish at any one time. When the weather is calm they can be seen free jumping from a great distance. They can also be seen breaking the water when feeding in pods where they raise their sail above the surface and use it to herd up bait fish. Sailfish are known for their blistering runs and their incredible acrobatics as they leap around in their efforts to earn their freedom. Often multiple hook-ups can be experienced especially when a pod rises up to inspect your spread of lures and skip baits.

Teasers certainly help when targeting billfish as they attract them into your spread. The most common teasers used are called daisy chain teasers and they usually consist of a few plastic squids on a cord line that can be easily pulled into the boat when the sailfish appear. When the teaser is removed from the water the sailfish usually then focus on your skip baits and hopefully pounce upon them with vigour. When this occurs release your line and let them run with your bait. This way they can take the bait down and are then easier to hook. Garfish are the most common skip baits used on sailfish and are usually successful. The use of circle hooks has become popular for hooking sailfish as they not only have a more successful hook-up rate, but are better for releasing the fish as well. When releasing the sail fish it is recommended that you do not remove the fish from the water. Secure the fish by grabbing the bill with a gloved hand, remove the hook and then slowly move along in the boat swimming the fish until you feel it is strong enough to be released. 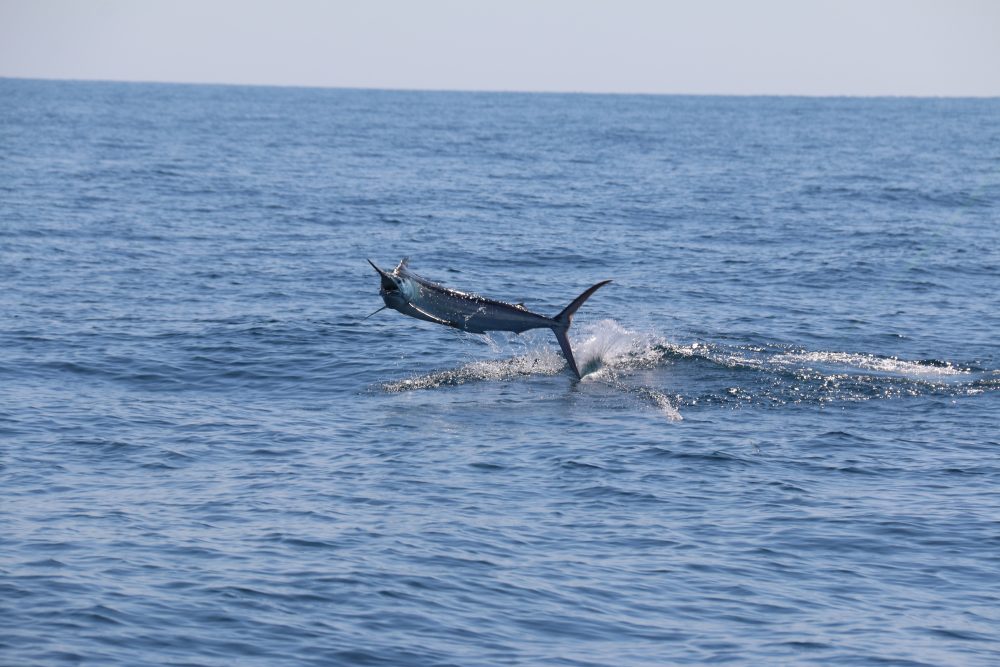 Billfish can also be targeted around the Perons. This small feisty black marlin took a lilikng to a trolled garfish bait

Black marlin can also be targeted in the same area as the sailfish, but are encountered much less. They usually range in size from micro blacks around 5 kg up to much larger fish over 100 kg. They generally fight harder due to their larger size and don’t jump as much as the sailfish. I had a great day in September 2019 chasing billfish off the Perons. My good mate Wayne Baldwin and I hooked five for the day with three sailfish and one black marlin landed. The marlin weighed around 30 kg and put on a great display before finally succumbing after a torrid 45 minute fight. The sailfish ranged in size from 12 to 20 kg and were subdued much more quickly. We also saw plenty of free jumpers throughout the day and had a large black well over 100 kg drop into the spread for around two minutes, but unfortunately it was not interested in any of our offerings at the time.