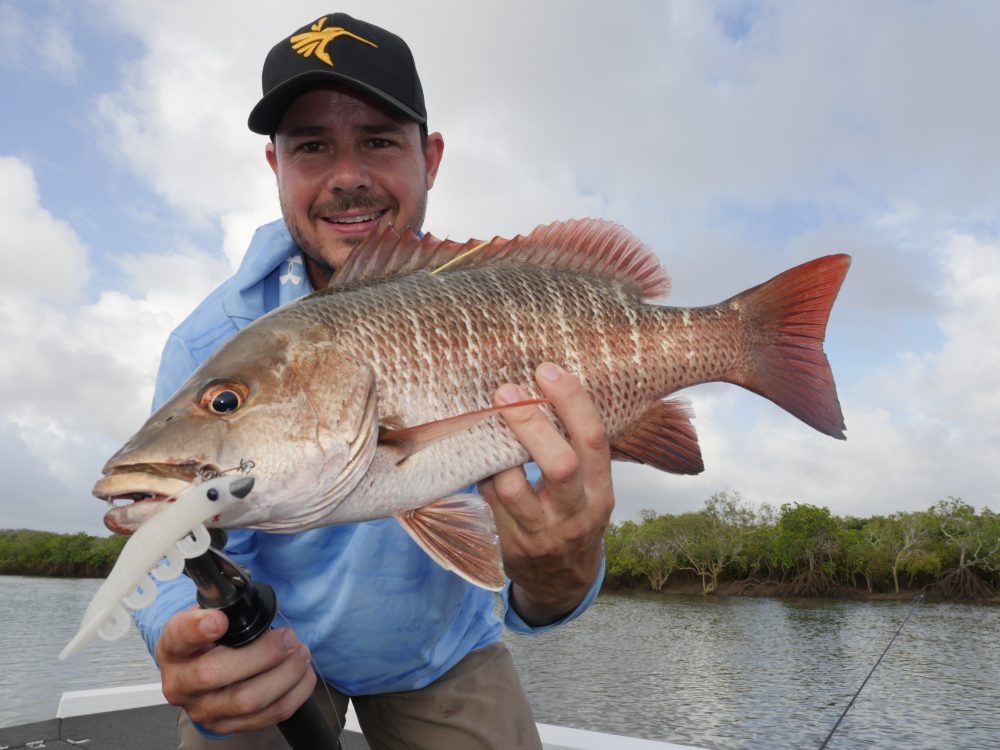 Prawn imitation lures have been around for a long time. It seems though that over recent times “prawning” has ramped right up. By prawning I mean anglers tying on their own preference of artificial prawn and looking to fool the almighty into thinking it’s the real deal.

So many variations of prawn lures; size, colour, rattle and scent just to name a few. It can be overwhelming and confusing as to which ones to invest your hard earned money into. I’ve used some of the most realistic prawn lures on the market. Some of these lures are so life like but seem to struggle to get a bite. Meanwhile you tie on some sort of dysfunctional multicoloured madness and they eat the bloody thing…..often. Why would they ignore something that looks natural and eat a Christmas tree decoration?

I don’t think we will ever fully understand the piscatorial world. It would probably send yourself insane if you thought about it long enough. At the end of the day you just want a prawn that the target species is going to eat, by thinking it’s a prawn. 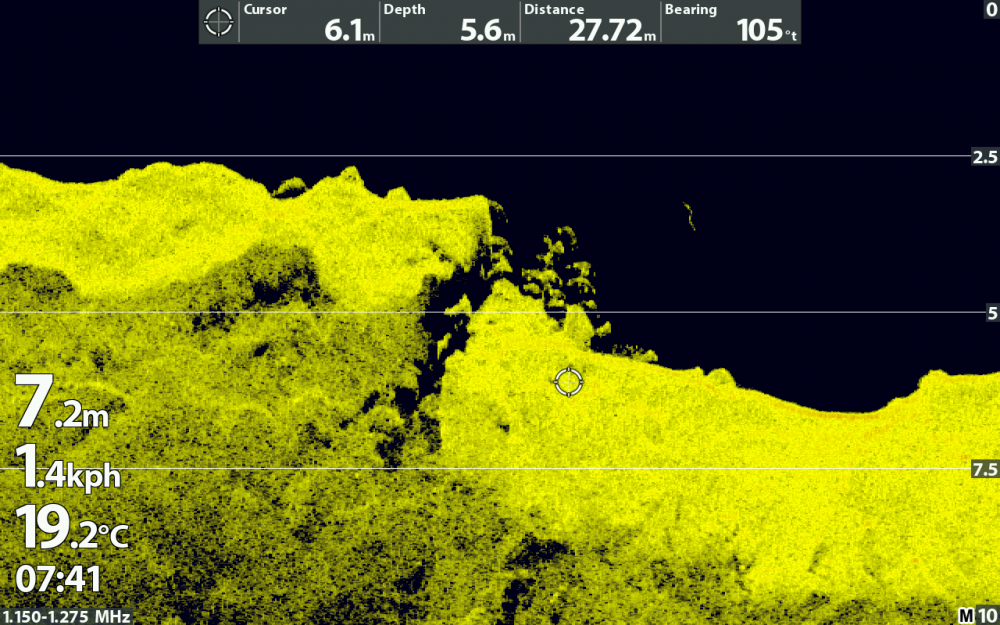 Regardless which type or model you go for, you will need to learn how to drive each one. By drive I mean work out which retrieve works best. In the past we have worked our prawns quite erratically and I believe a high percentage of the bites we got were in fact reaction style bites. There’s so much more to it than a one track retrieve.

I believe the best thing you can do with any lure is first of all think how that particular species moves or swims through the water. Second, try and mimic the action with the lure you’re using. Lastly you really need to visualise what your lure is doing under the water because ninety percent of the time you’re unable to see what it’s doing.

The number one mistake that I see a lot of people make is thinking that their lure is in the strike zone when in fact it’s too low or too high.

This can be due to being off with the fairy’s and not thinking about the subject at hand. It can be hard work to stay focused on the lure but I assure you the more you pay attention, the more fish you will put on the deck.

I mentioned before about types of retrieves and the way prawns move. Generally when a prawn has been startled then they will flick like crazy and that’s why I believe ninety percent of anglers try to mimic this action. When a prawn is just coasting with the current or moving around it is just a plain old boring slow swim along the bottom. This is the type of retrieve that has been doing a lot of the damage. It’s very draining on the angler and does require a fair bit of discipline to do it well because in all honesty, it’s shit boring.

This is the first style of retrieve that I will go for when first casting a prawn lure out. What you’re chasing is that feed bite. There will be no mistake when they want that prawn, they generally don’t nibble on it.

Be ready because some of the hits I’ve received would rip the rod out of your hand if you weren’t paying attention.

The slow roll is best utilised when there is little to no structure present. If the fish you are targeting are in snaggy country then you can still run the same technique, however you will have to follow your line a lot more closely and add little hops to just flick your prawn over snags. A weedless prawn presentation is paramount for this type of fishing. In this type of country you’ve got a split second to turn the fishes head so the quicker you react and get the fishes head towards you the more chance you’ve got of successful extraction.

If the slow roll doesn’t work or they seem to be unresponsive that’s when I’ll go for a bit more fancy rod work to get that prawn moving. It can be as subtle as a lift and drop to a set of short sharp jabs. Just mix it up to see what works best. What works for one prawn may not work for the other.

We have covered types of retrieves so what about which types of prawn lures work best? I’ve generally got an entire tackle tray of prawns ready to go. Some prawns can’t be stored in the tray due to the fact they need to stay in their packet. 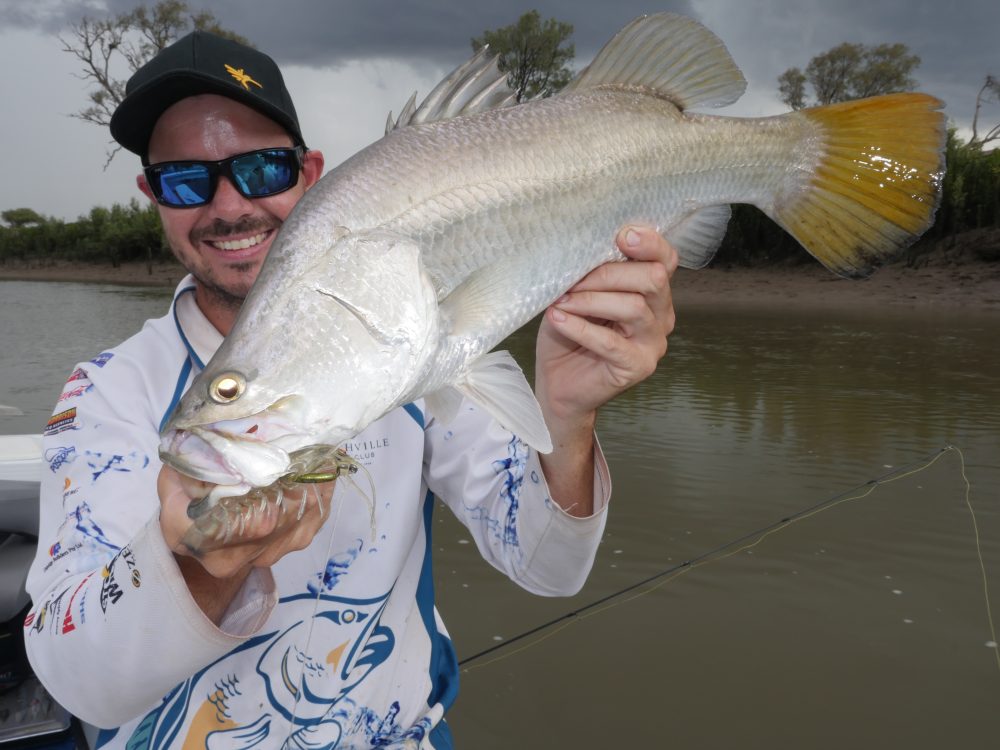 When the water is fairly clean this is when I will go for a realistic looking imitation. Two of the best I have found are Jelly Prawn Lures and the Chasebait Flick Prawn. If you look at them next to a real prawn they are a dead ringer. The Jelly Prawn lures are hand-made so they will cost you a little bit more and are also a bit on the soft side. Carrying a tube of super glue is a good idea if you want to get multiple fish from each lure. A small price to pay for a banana prawns twin I reckon.

The chase bait flick prawn is fast becoming a favourite also. The material is fairly tough and the weedless standard hook has done the job. I have found that the little bit of material that keeps the hook in place likes to tear but super glue is still your friend.

If you’re looking for a super tough great all rounder prawn then it would be hard to go past the Zerek range. Live shrimp, cherabin and the absolute shrimp have all been consistent players. The standard weedless hook that the shrimp and cherabin come with are a fairly tough hook. I have bent them but that was by running fairly high drag pressure. If you drop these plastics just under the water and watch the action you’ll see why they are so effective, the action looks red hot.

I’ve saved the best till last, the little confidence prawn lures, the ones I generally reach for first that have continually caught fish for me. The first one which I have only recently discovered is the Swim prawn from Holt Productions. What I like about this plastic is it’s one of a kind and a lot of thought has gone into the design. You’ve got the standard prawn shape body but underneath you’ve got a set of very cool legs that vibrate when the prawn is pulled through the water. 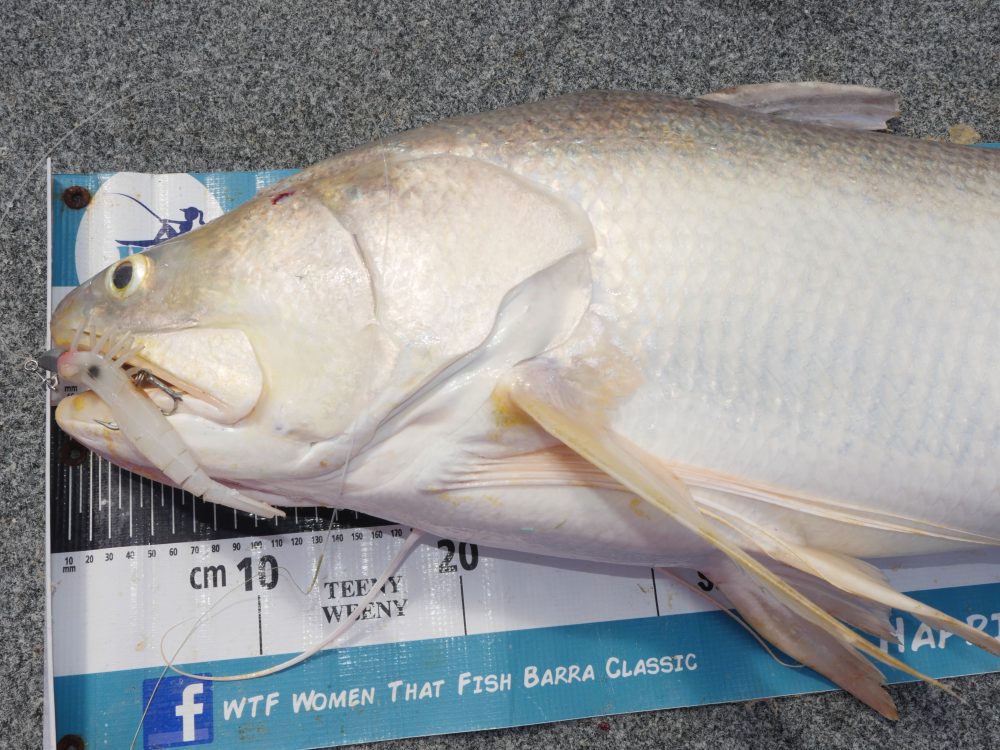 Another bonus of this plastic is it isn’t available in local tackle shops. I’m always on the lookout for plastics that aren’t locally available as chances are the fish might not have seen them as much.

My all time favourite and number one fish catching prawn would have to be the Berkley Gulp shrimp. They do have a prawn like profile but overall the plastic is pretty standard. I’ve got a few mates that have said “how do they work, they look like a bloody stick”. They’ve got a fair point. As far as presentation goes there’s not much to them but by gosh they work, and work very well.

So what makes them so special and sets them apart? They are not a big plastic by any means. The three inch size has been the most productive player by a long way. The saying “elephants eats peanuts” rings very true.

Even when the plastic is bent and not falling correctly they still seem to get eaten on the drop. I believe it’s in the secret sauce these plastics live in. The recipe is pretty hush, hush, similar to that of the colonel’s secret herbs and spices.

They are an absolute pain in one sense as you need to keep them moist or in the packet with the juice otherwise they shrivel up and go hard. Are they worth putting up with for this issue? You bet they are. If you haven’t tried them then make sure you give them a go. 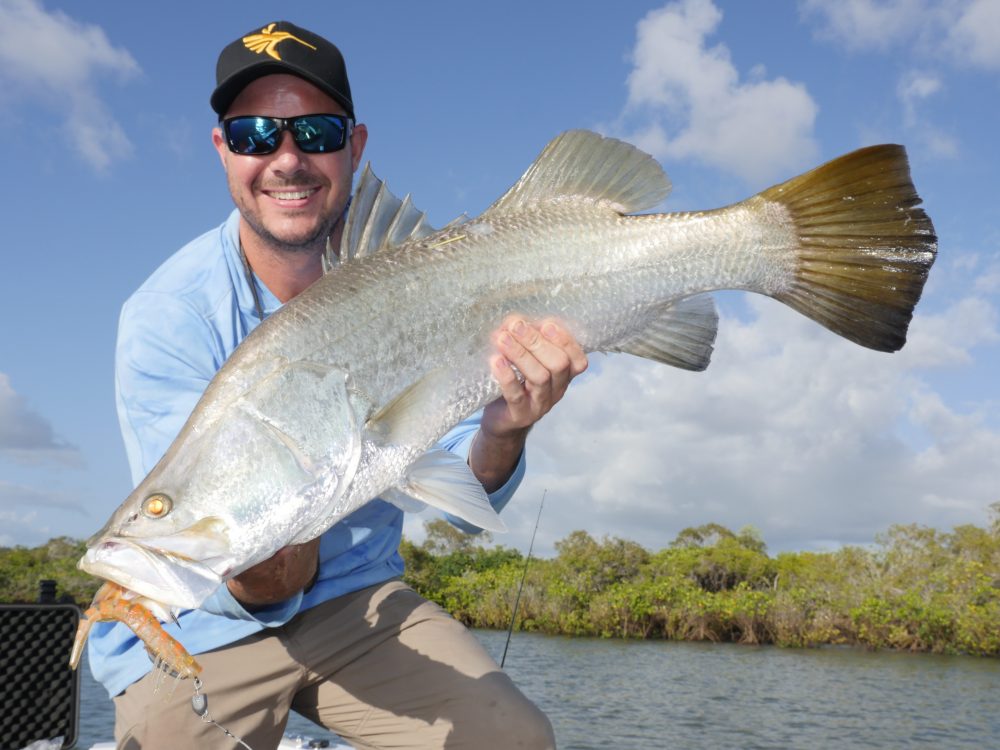 Sometimes it can take a strange colour to get them to bite. Ecooda Golden Carrot got the nibs on this prime salty

So what time of year is best to tie on a prawn imitation and send it out into the briny? The simplest answer is any time of year. It’s generally a type of lure I will cycle through when I’m sitting on a spot trying to find out what they want to eat. Some signs that will tell you to tie on a prawn is if that’s the particular bait species that’s inhabiting that area. I’ve heard of a few guys say that if a bait species is thick in an area then go for something different as they would be sick of eating them. In my experience that’s not the case. The predominant bait profile always gets a run first.

Winter is another great time to give the prawns a run. It does make sense once you think about it especially for barramundi. Metabolism slows with the cooling temps so giving them a nice slow prawn can often trigger a response when they are a bit lethargic.

So what about a couple of one percenters? The little home improvements that can sometimes make the difference. The first one was mentioned before about scents. With the success of the Gulp shrimp I’ve played with a few different types. I really like the Squidgy S factor scent. I’ve got plenty of bites when this has been applied.

Scent is not something that you will add and get them jumping in the boat however. It’s more of a tactic to have up your sleeve that might help trigger a bite. Make sure you try a wide range as what works for me might not work for you. There’s plenty on the market to try from.

Another great little tip to add to your prawns is the addition of a rattle chamber. The guys from Zerek were onto this a long time ago as their Live shrimp has one imbedded in the head. You can hardly hear the noise unless you put it up to your ear but it can make all the difference. You can buy them separate on the web and add them to any soft plastic you like.

It’s now time for you to go forth and conquer. Get into your local tackle shop, grab a handful of prawns and get out there for some fun. Work hard on your technique and location and watch your results grow.