Summertime snapper an option on the Gold Coast! – By William Kitching 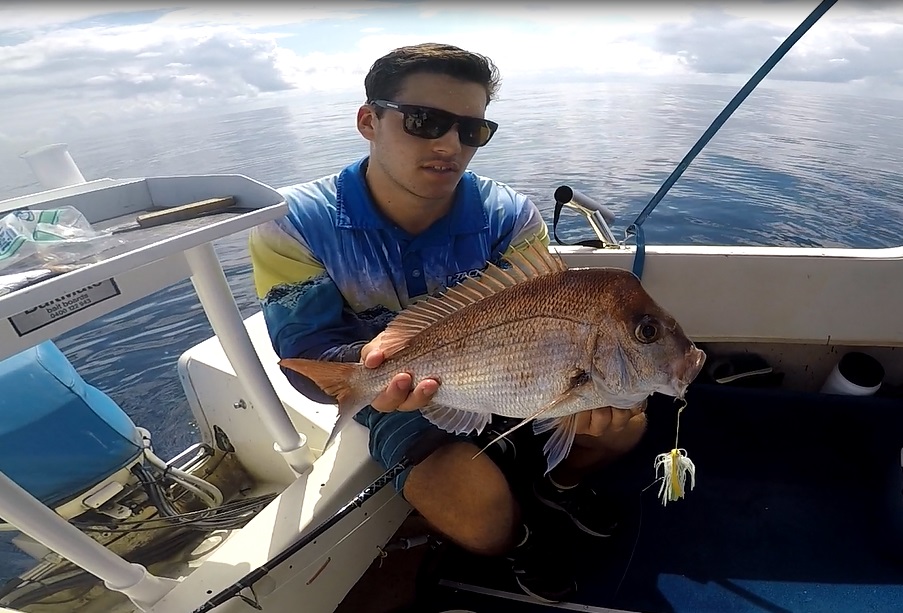 As summer begins in South East Queensland, and the annual flow of warm water is pushed down the coastline by the East Australian Current, pelagic fever starts to kick in for many fishermen and women in the area. Marlin, wahoo and dolphinfish become an option out wider, and mackerel are a sought after species on the close in reefs along the coastline. However, it is a species that is traditionally considered a winter target which can produce great fishing in the early summer month of December off the Gold Coast, and that species is snapper.

Although attention seems to shift to other species as the weather and water begin to slowly heat up, some of the best snapper fishing can be experienced from spring up until the end of December! The snapper may not be as plentiful on the shallow reefs close to shore, but if your efforts are focused on the 24 and 36 fathom reefs (40-60 meters deep), you will find that the snapper are still in large numbers and good quality fish are still there just waiting to be caught. At this time of year, the pelagic species can be patchy sometimes as it is only early in the season, so targeting snapper can be a good opportunity to fill in time while waiting for them to arrive in numbers. It also must be said that once the current starts to run hard out wide, it is physically impossible to fish for snapper on these grounds, and it will not ease until autumn. Some years the strong current starts earlier than others, but generally during December you will find it is still okay. You will still need to make sure to get a few important things right to give yourself the best chance possible to hook up to some of these big, red steam trains.

A solid snapper which took a whole pilchard outside of the traditional snapper season.

It is a fact that snapper (and most reef fish) tend to have specific ‘bite times’, where they will feed the hardest, and be most willing to eat your bait or lure. The main three bite times that I focus my time on are sunrise, sunset, and the couple of hours either side of tide changes. During summer when fishing for snapper, I prefer the sunrise and early morning period, followed by the afternoon and sunset period. If you can line up a tide change with one of these low light periods, that is ideal. Usually as soon as you arrive at sunrise,you will often be catching fish from your very first drop. On the 24 fathoms, the fish may not bite as late into the morning after the sun has risen, as a result of it being slightly shallower than the 36 fathom reef, where they tend to bite a little longer into the morning. Also take into consideration that the boat trip out to these spots can take between 20 minutes and half an hour or slightly more depending on weather, so choose a calm day and try to time your arrival for sunrise if leaving in the morning.

Another thing to think about is the gear, bait and rigs you’ll need. Starting with gear, 20lb braid with at least a rod length of 20lb fluorocarbon leader will do the trick.You can use either overhead or spin reels, but overheads are great for thumbing the spool and slowly lowering your baits, which can be harder to control with spin reels.

In terms of rigs and hooks, I prefer to snell/snood two hooks together (sizes 4/0-6/0). Having two hooks means a better hook-up ratio, and also allows better bait presentation which is key.

Having a running ball sinker straight down onto the top hook is a simple and effective method. Try to have a sinker as small as possible, so that your bait slowly wafts down, but heavy enough that your bait still makes it down near the bottom (you may have to experiment). Using rigs with a very heavy sinker isn’t as effective, as they will just rocket to the bottom too quickly, straight past the fish without giving them a chance to eat it! Snapper will swim up several meters to eat your bait. On a very calm day, size six ball sinkers seem to work, but if there is a slight breeze you may need sizes seven or eight. The best baits to match up on this rig are whole pilchards, live yakkas or slimy mackerel, strips of bonito, yakka, slimy mackerel, etc. or whole large squid. It is true that big fish will eat small baits, and small fish will eat big baits! You can also use heavier jigs which imitate octopus and squid, ‘slow pitch’ jigs, or larger soft plastics around 5-7 inches long. A rule of thumb for lures is to use 1 gram per meter of depth. 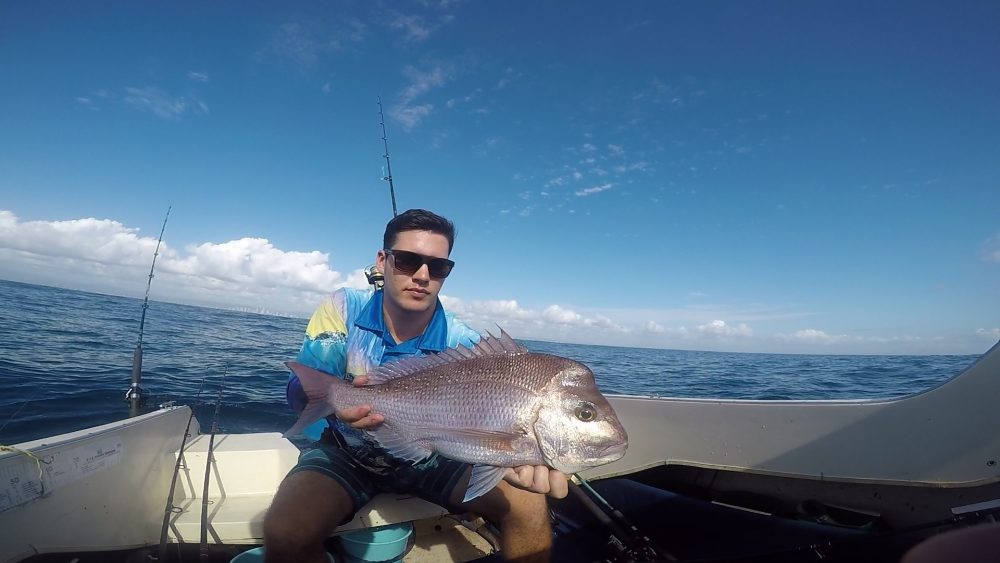 Here is a healthy snapper from the 24 fathom reef glimmering in the summer sunlight.

Now that you know when you want to be fishing and which gear and rigs to deploy, you are probably wondering what to actually do when you arrive at the spot. Well, let’s start from the beginning! First of all, it is important to use your sounder to look for some schools of baitfish or larger fish (snapper) close to or a few meters up off the bottom. Bommies or larger ledges on the reef that drop a few meters are also where you might see bait and snapper on the sounder. From personal experience, where there is bait, especially tight balls of bait on the sounder, the snapper are usually close by so this is definitely the main thing you want to look for. In the deeper water I find that it is easier to drift, especially if you see several bait schools in the area.

Sometimes if the wind is pushing you along just too fast, and the angle of your line is too far out the back of the boat, you may need to use what is called a ‘drogue’ or ‘sea anchor’. It is practically a parachute which you tie off to the back of your boat, which sits just under the surface of the water causing you to drift slower.

Take notice of which way you are drifting, so that when you locate a bait school or fish to target on your sounder, you can position yourself so you will drift the right way back over the top of them.

Once you understand which way you are drifting it is time to drop your baits/lures. Snapper are renowned for eating baits and lures as they are wafting down through the water column, so try to thumb your line as it drops, and be prepared for a hard strike! If this happens, swiftly click your reel into gear and start fighting the fish. This is why it is important to let your bait waft down as naturally as possible, and use a lighter sinker when possible. If your bait or lure does happen to make it all the way to the bottom though, you can still expect to pick up snapper, or other summertime by catch such as pearl perch, tuskfish, moses perch, teraglin, cod, and even bigger fish such as kingfish, amberjack, Samson fish or maybe even a cobia or jewfish. 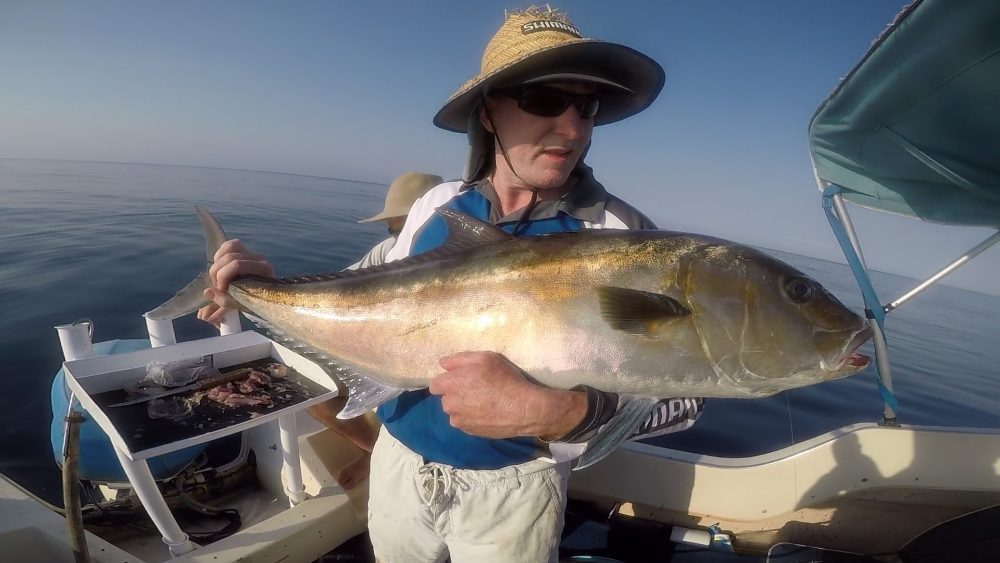 Darryl Kitching with a 15kg Samson fish, showing off the by catch that can show up. A great effort on 20lb line!

So, there you have it folks, snapper are readily available off South East Queensland in late spring and December. I hope this has been an eye opener to the fact these fish are available almost year round, and that you don’t have to get out of bed at 4am on a freezing cold winter morning to catch them! As stated above though, over summer the current on the 24 and 36 fathom reefs does pick up drastically and is not even fishable no matter what you try until the end of autumn, so get out there before December finishes! If you would like to see more of this, I have some videos on my YouTube channel (search: Will Kitching) that you can watch and hopefully learn something from. I hope you’ve enjoyed this read, and can get onto some snapper under the warm summer sun! Tight lines.