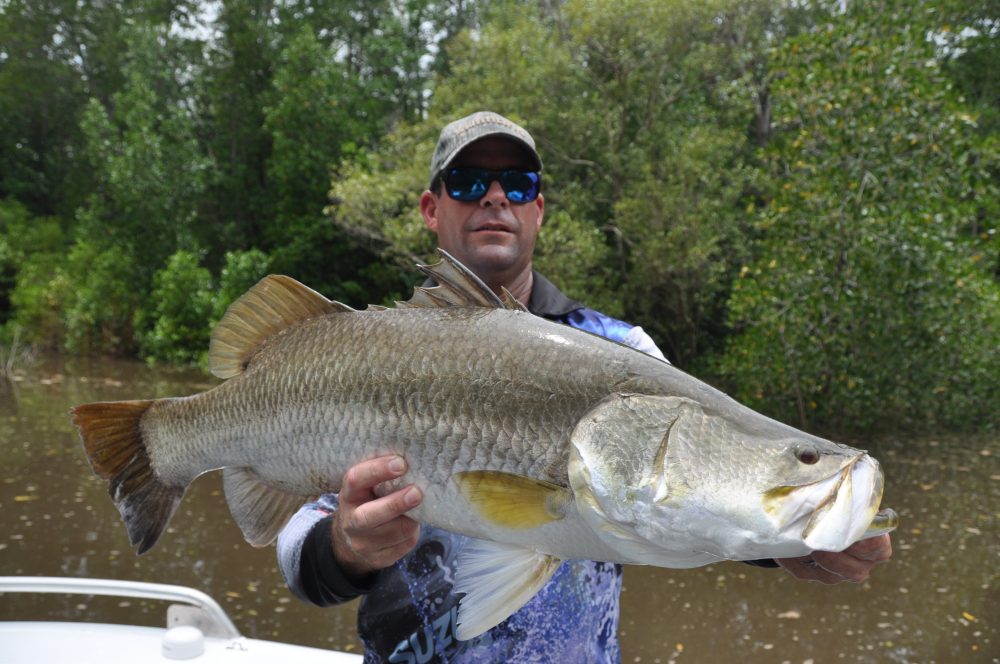 The Adelaide River is an extensive system situated only 60 kilometres east of Darwin. Due to its close proximity to Darwin it is heavily fished by the local angling fraternity as it can often produce some outstanding run-off fishing. Some of the best fishing can be experienced near the mouth of the Adelaide River during the wet season. This area can be accessed from two major points – Saltwater Arm ramp near the mouth of the Adelaide and the Arnhem Highway ramp situated around 70 kilometres upstream from the mouth of the Adelaide. Great care must be taken when accessing the Saltwater Arm ramp during the wet season as the dirt road can often become impassable during periods of heavy rainfall.

There are five main creeks near the mouth that provide excellent run-off fishing during the wet season. There are four large creeks on the left (The Wiltshires), when heading up the river from the mouth and one on the right, Melacca creek. All of these creeks flow off extensive floodplains and can produce some awesome fishing. When fishing these creeks, neap tides can often produce better results due to the improved water clarity experienced especially when trolling over submerged structure. The mouths of these creeks can also fish well just on the turn of the high tide. However, some of the best run-off fishing can be experienced by heading right up the top of these creeks and looking for junctions or small gutters entering the main creek from the surrounding floodplains.

When fishing the upper areas of these creeks it is best to follow the tide up before reaching the upper limits of the creeks and remaining in the area for the turn of the high tide. This is when some of the junctions can fire up on the receding tide as the bait fish are flushed from the surrounding floodplains. 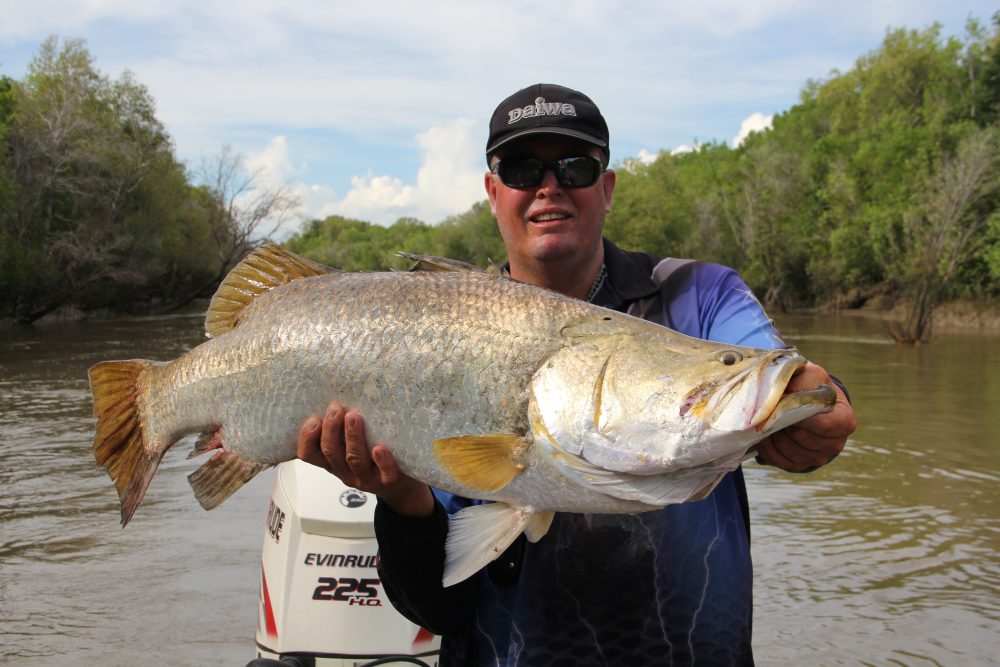 Trevor Robb with a 105 from wiltshire no.3

Upstream from the Arnhem Highway ramp there are many creeks and rock bars worth fishing during the wet. These creeks can often produce fish early in the season and it is not uncommon to experience good sessions in January as long as the river is not too flooded. When fishing upstream it is important to take note of the difference in tide times to Darwin. The tide at this ramp is about five hours behind the Darwin tide. It is also important to realise that the run-off fishing upstream on the Adelaide is still greatly influenced by the tides. Quite often the fishing will shut down on the incoming tide as the river rises and causes the run-offs to back flow onto the floodplains. The barra simply move up the creeks with the tide following the bait fish.

The fishing will often improve dramatically as the tide peaks and begins to recede and the clear tannin-coloured water begins to flow off the floodplains. Once again position yourself at the mouths of these gutters and creeks and work the colour changes for feeding barra. Quite often you will notice bait fish being flushed from these gutters and creeks into the main river where the barra will be waiting to devour them.

Only a kilometre upstream from the ramp is Marrakai creek on the left. This is one of the largest creeks that flow into the Adelaide River above the Arnhem Highway. The mouth of this creek fishes well on the change of the high tide and there are numerous run-offs and gutters up the creek that also fish well on the receding tide. As you travel further up the river you will come across a few other feeder creeks that also produce good fish during the wet. 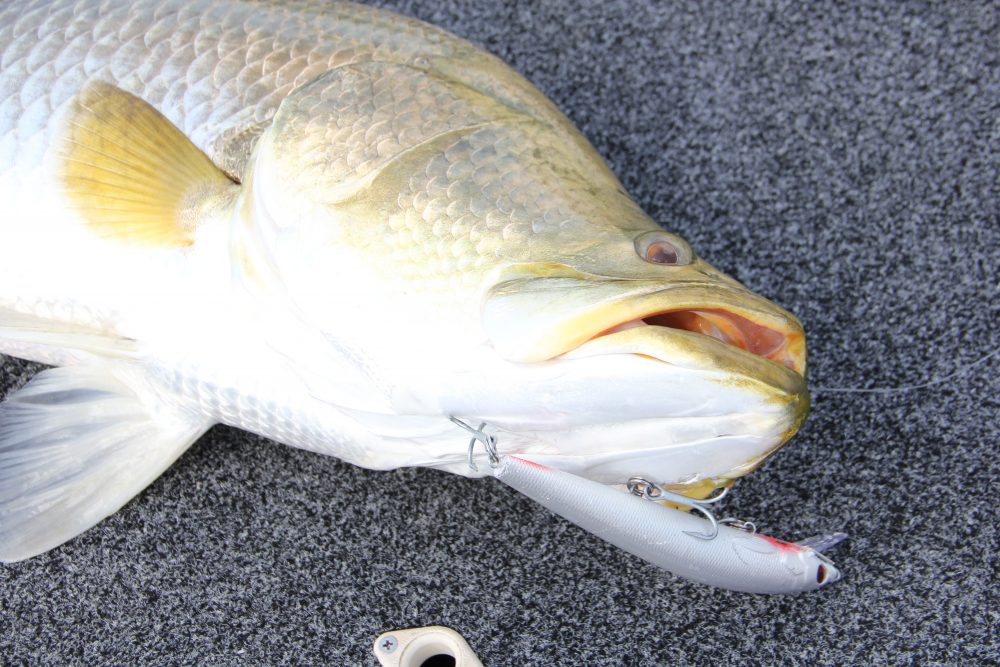 A Reidys big B52 was the undoing of this nice barra

Last cast creek and Donald’s creek are situated on the right as you travel up the river about 15 minutes from the ramp. These are both large creeks and can produce good fish on the receding tide when they quite often show extremely good colour changes at the mouth. Continuing on further upstream is the famous Beatrice creek on the left which produces good catches particularly at the end of the Wet season. There are two junctions that fish extremely well in this creek both on the incoming and receding tides. The junction at the top of the left fork is a particularly popular spot and will fish best when tarpon and rainbow fish are prevalent.

The mouth of Beatrice creek also fishes extremely well for large barra on the first of the incoming and on the turn of the high tide.

Every year metre-plus barra are caught in this area particularly by trolling the submerged snags below the mouth of the creek.

Ten minutes further up the river is Goat Island. At the top of Goat Island there are two more creeks that regularly produce good barra. Kaissis creek is on the left and Bald Hill creek on the right. Kaissis creek is quite large and fishes well at the mouth either casting or trolling. Bald Hill creek is only small, but I have experienced some incredible sessions at this creek particularly on the receding tide when it is flowing strongly. 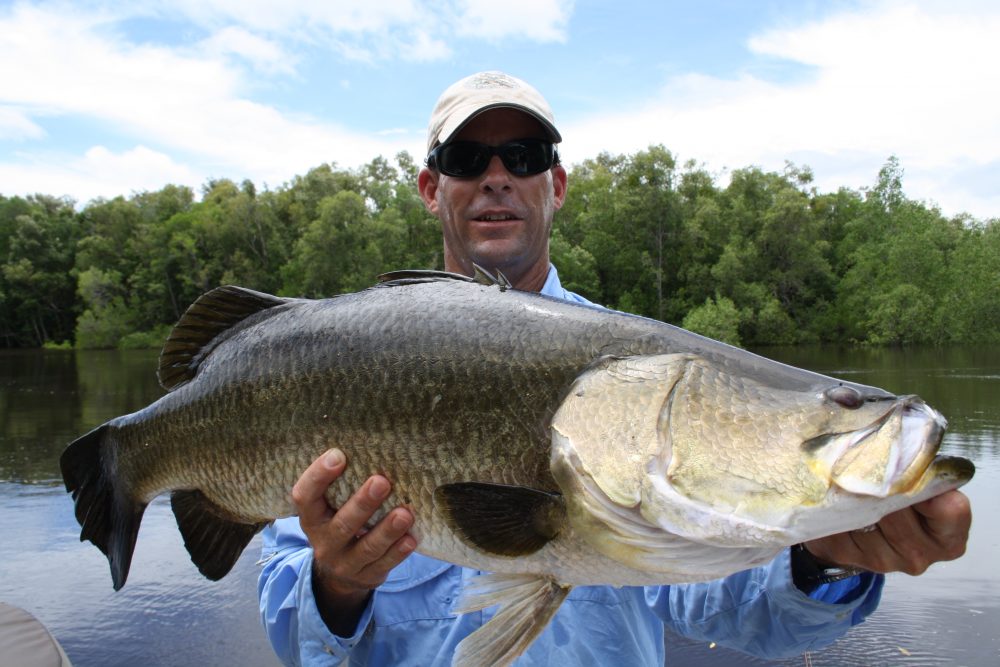 swamp dog from up the top of wiltshire no.2

The next run-off encountered upstream is the Manton River. This junction nearly always has a sensational colour-change, but rarely produces good catches. For some reason it rarely fishes to its potential. Continuing upstream for another half hour you will arrive at the largest junction in the upper Adelaide River. This is where the Margaret River enters and it provides one of the best junctions to fish just after the wet season when the river is dropping.

I have experienced some incredible sessions here where a barra a cast has not been uncommon.

However, it is extremely important to realise that this junction like many in the Adelaide River will only fire for a few days when the river height is conducive to the feeding barra.

There are also many rock bars on the upper Adelaide River that fish well during the run-off. These rock bars fish well on the first of the incoming and on the turn of the high tide before the current starts to flow too quickly. Fish can be caught casting to the deep holes on the sides of the rock bars or by simply trolling lures over them. When trolling these areas it is important to select a lure that will dive deep enough to bounce over the rock bar. Many of the fish sit in tight against the rock bar and so will not take a lure unless it passes directly in front of them. Another way to fish the rock bars is to cast vibes, which you can work slowly across the bottom. 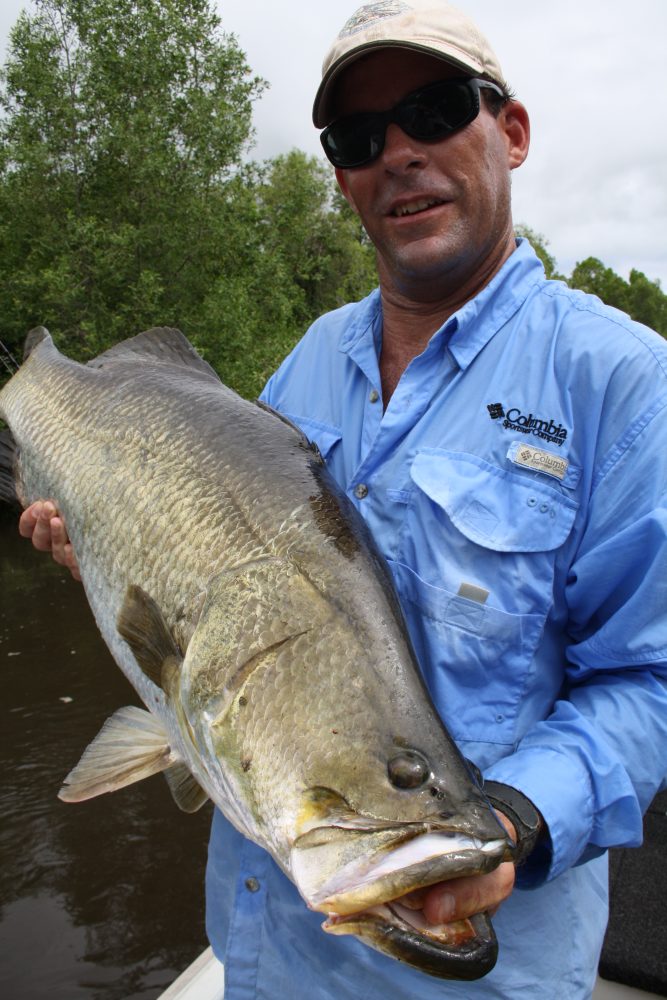 Metrey landed in the middle of the run-off

Many of these rock bars on the upper Adelaide run right across the river forming a natural barrage at low tide when the river is not too flooded. As the tide turns to come in, large schools of mullet are often seen gathering at the bottom of the rock bar and around eddies to the side of the rock bars preparing to travel further upstream. This is a prime time to fish these areas as the predatory barra quite often prey on the mullet before they can travel further upstream past the rock bars. Shallow diving lures like the big Reidys B52 and surface lures like fizzers work particularly well when fishing the still water around these areas at the turn of the tide as the barra usually feed on or near the surface.

Just after the river starts to drop there are many smaller gutters that flow into the river for only brief periods of time. Look for any sort of colour-change coming into the main river as this is a good indicator of an area that could produce good numbers of barra. I once fished a small gutter only two feet across at the mouth for a total of seven good barra up to 70cm. Even though the gutter was only small there were many small rainbow fish being flushed into the river at its mouth. The following day I returned to find that the gutter had already stopped flowing.

Lure selection is paramount when fishing the run-off in any river.

I personally have found the following lures to be effective when fishing the Adelaide River during the run-off. When trolling, I often use Nomad DTX lures in bright colour schemes. Anything with green colouring has worked particularly well for me. Use your sounder to locate submerged structure and take note of the depth. Quite often you will find that a deeper diving lure worked through the snags will give you the required result. The Nomad DTX minnows can get down to depths of up to eight metres and so are extremely effective in the deeper holes found in the upper reaches of the Adelaide. 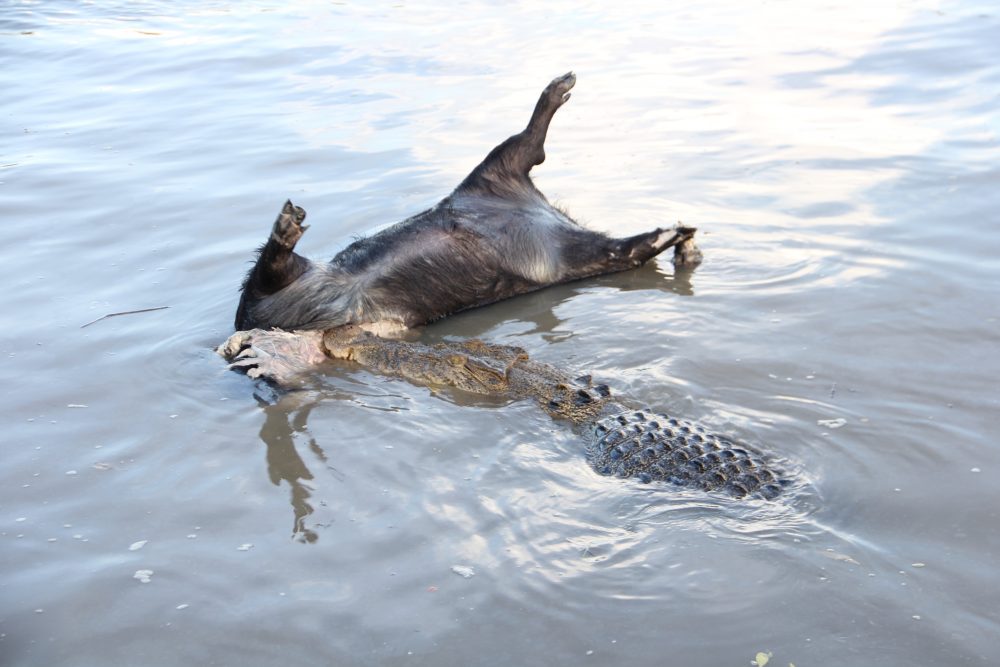 croc feasting on a pig

Small soft plastics and vibes work well when small bait fish are encountered at the mouths of the feeder creeks. When the fish are feeding on the surface then shallow B52 lures and fizzers are extremely effective. I have encountered some exciting sessions fishing with fizzers at the mouths of feeder creeks on the Adelaide just on dusk when the barra have started to feed voraciously on the surface. Although the hook-up rate can often be poor using fizzers, the enthrallment received from the crashing surface strikes more than compensates.

When the fish are sitting on the bottom then soft vibes are the way to go. The Reidys fish snak vibes have worked very well for me in the smaller 20g size. Cast the vibe to where you see the fish holding on your sounder and let it sink to the bottom. Work your vibe slowly across the bottom with an erratic jigging rod action to try and grab the attention of the fish. I have had some insane sessions using this method when other strategies have often failed to entice a strike.