Spanish Mackerel – An Icon Under Threat – Part 3 – By Bill Bowtell 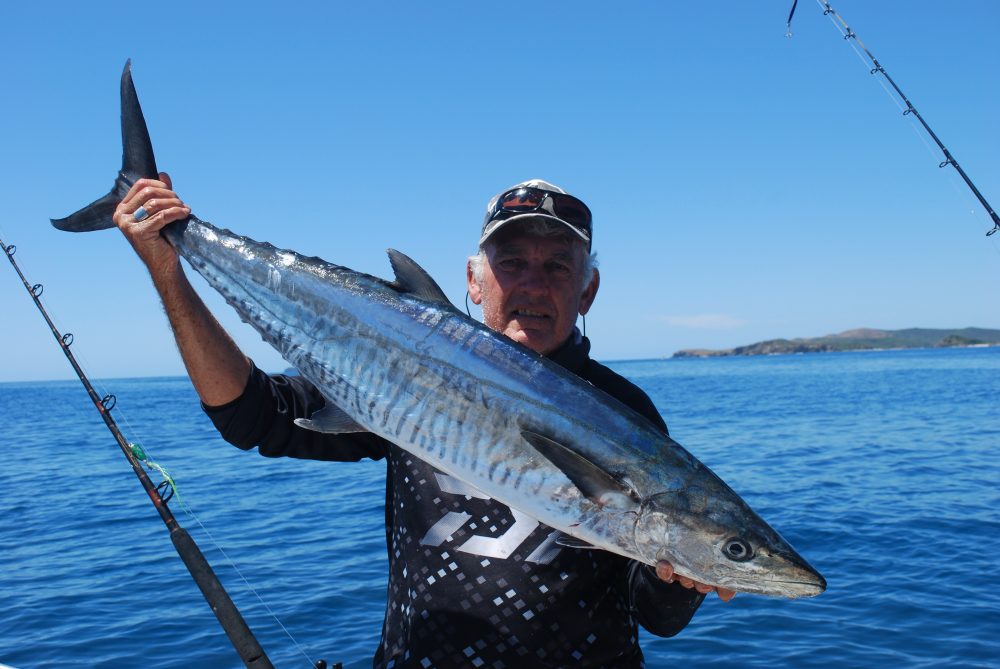 Those who are regular readers of Fish and Boat, may have taken note of two previous articles under the same title “Spanish Mackerel – An Icon Under Threat (Parts 1 and 2)” which appear respectively in the July and August 2021 editions of Fish and Boat Magazine.  These two articles highlight the review process under both the “Sustainable Fisheries”and “Harvest Strategy Policy” documents.  As well, they also identify and refer, presented information from the inaugural working group meeting held in May of 2021, which included: 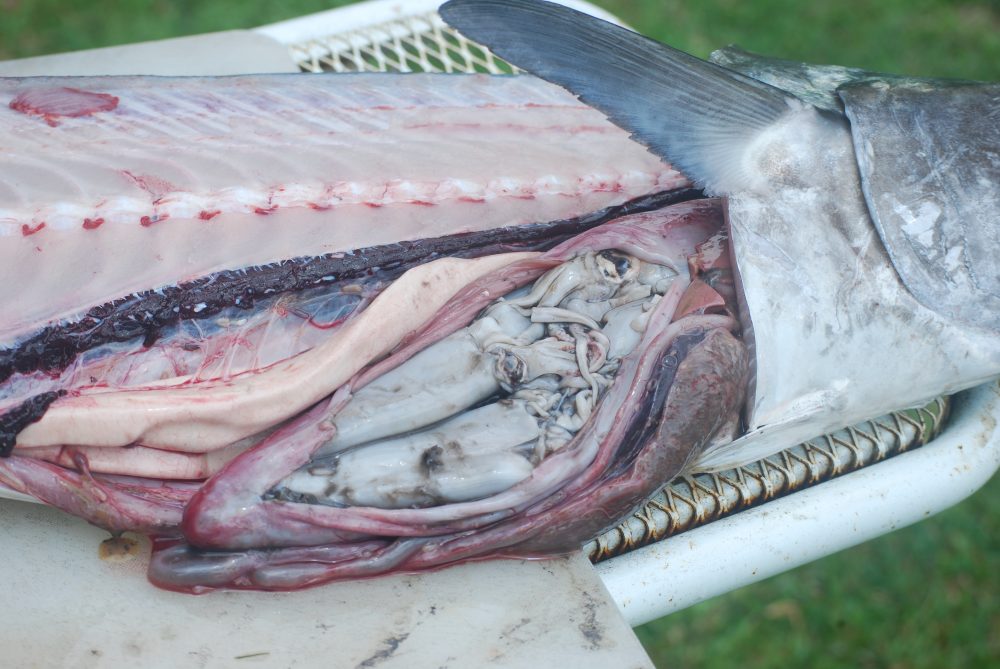 When fish are migrating to spawning areas they stop over to feed. They are hungry. The gut of this fish contained 9 squid.

An outcome action from that inaugural May 21 meeting was for Fisheries Queensland to:

This peer review was undertaken by Neil Klaer, an eminent CSIRO research scientists from the Division of Marine and Atmospheric Research.

Prior to the 7th-8th Feb 2022 meeting, members of the ECSM working group were each provided with a copy of the 95 page “Stock assessment of Australian east coast Spanish mackerel (Scomberomorus commerson) 2021” document, along with Neil’s, 16page review summary. Also included for reference by working group members was an additional 24page document, listing the responses by the Authors of the Stock Assessment document, to questions and requests for further information regarding points of clarity raised by the reviewer Neil Klaer.

The Executive Summary of the review indicates those areas where major uncertainties occur: total catch (including discards), catchability change and hyperstability in Catch per Unit Effort (CPUE) {eg targeting the abundance of fish at a spawning site whilst other fish spawning sites shrink, or even disappear} and the assumed level of stock recruitment resilience, or “steepness” of the stock.

The uncertainties were examined in detail and there was acceptance that the assessment had been competently constructed and was adequate given the available data; a point to note!

The Summary further indicates that the assessment uses a base-case and sensitivity scenario approach which is adequate for management purposes but lacks detail for scientific examination of the stock assessment model. 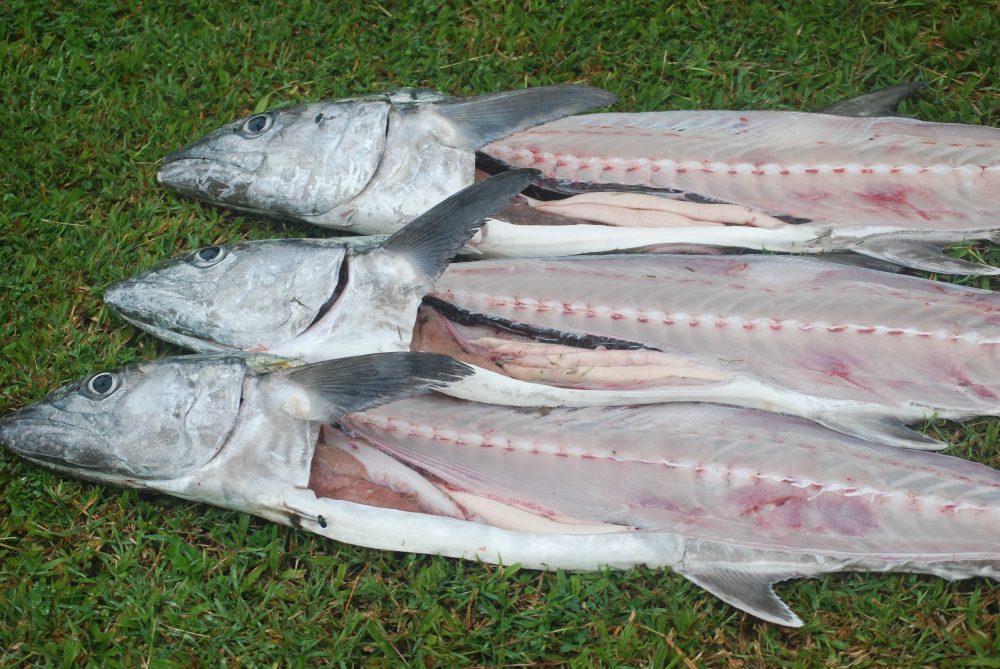 “Two boys and one girl” – All of a similar size, around 8kgs. Note the under-developed gonads and ovaries. Time of year was early June.

The Stock Assessment document listed a comprehensive list of recommendations. These were also reviewed with the following comments:

“The assessment report included a fairly comprehensive section on recommendations separated as they apply to data, monitoring and research, management and the stock assessment. I agree with those recommendations and particularly encourage any efforts to make use of earlier composition data that may enable extension of recruitment deviation estimation to earlier years, and exploration of the development of fishery independent abundance indicies such as from close-kin genetic analysis”

Most fishers are now aware of this Spanish mackerel review and the peer reviewed elements of the stock assessment which support the original stock modelling outcomes, specifically a recognized current base level of 17% of unfished spawning bio-mass.

There remains however, some conjecture out there within the fishing sectors and in the broader community regarding the robustness and integrity of the data;confidence in how this data was used; and, the modelling process itself.

As a member of the working group who has been presented with the modelling process; the documented results of the peer review by Neil Klaer; a scientific presentation by Alex Campbell explaining the outputs from the modelling; and, a statement of support (from a nominated Expert Panel) for both the data usage and its integrity in the modelling methodology, I am supporting the output of ECSM stock assessment of 17% (14%-27%) of unfished spawning biomass levels. 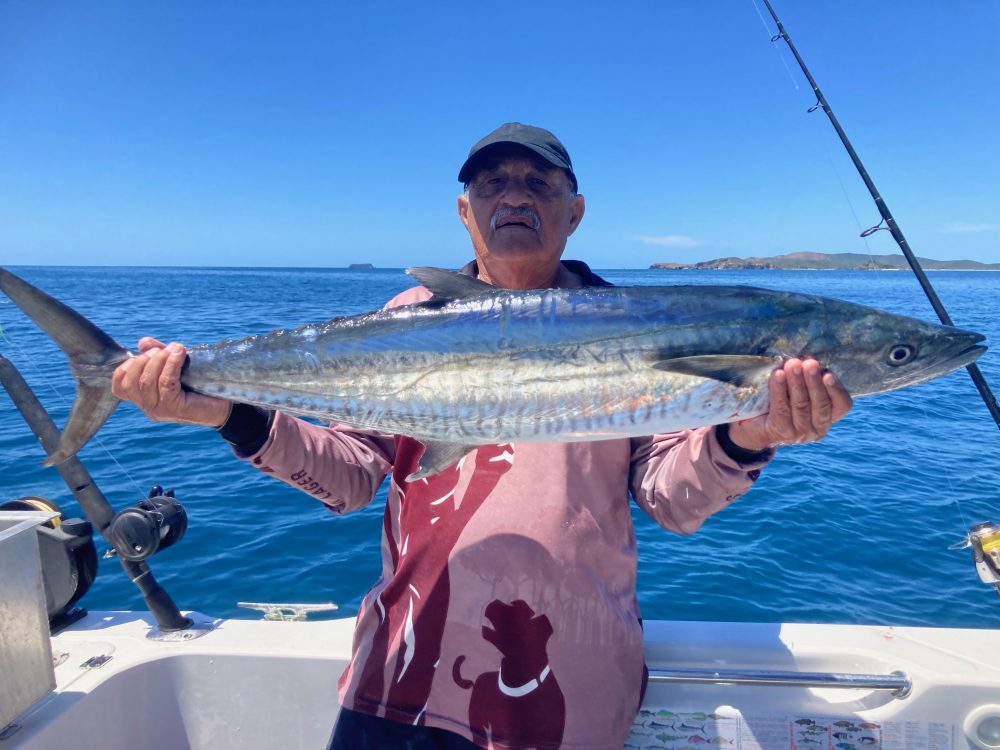 Guy Pirrone of Yeppoon with a 10.5kg Conical island Spanish mackerel. Note the lack of slime on the fish. The fish were heading south and had stopped over for a feed the previous day.

I would like to refer to this position of support, for not only the stock assessment, but for this new approach to fisheries management under the Sustainable Fisheries Strategy and its accompanying Harvest Strategy Policy.

… this new brigade of scientists and managers in Fisheries Queensland have the unenviable task of sorting out a mess that they have inherited.

Queensland studies of the East Coast Spanish Mackerel Fishery is data rich with input data going back to 1911.  This data has been added to over the decades, by such noted biologists and scientists as Geoff McPherson, Mike O’Neill, Alex Campbell, Sarah Buckley, Ruth Thurston, Andrew Tobin and Joanne Langstreth among many others, all of whom have added to this repository of data rich information about ECSM.

In their reports, dating back to more than 40 years and to most recently as 2020, they have identified a steady and systematic decline in the stocks of Spanish mackerel appearing along Queensland’s east coast, including the extirpation of fished spawning aggregation sites.

Even with this research at hand Fisheries Queensland (in its many forms) failed to act accordingly, by repeatedly ignoring the advice to cap “take and effort” in the fishery.

Instead, following the age old rule “manage the fishery under the single bottom line formula; $’s return”. The greater the $ return, the better the fishery was being managed. And history has shown this notion of management has been supported by successive Queensland governments. It is no wonder that fishers are wary.

History has shown that this is a dangerous and flawed model! I was once told by a former Chair, and friend, of the then QCFO, after we had both given independent presentations at a fisheries conference on, fish availability and catch sharing arrangements between the recreational and commercial sectors: “Good presentation, Bill. But both you and I know, that it won’t be us who determines who catches the last fish, but the market. Our job is to make sure that we get our share.” 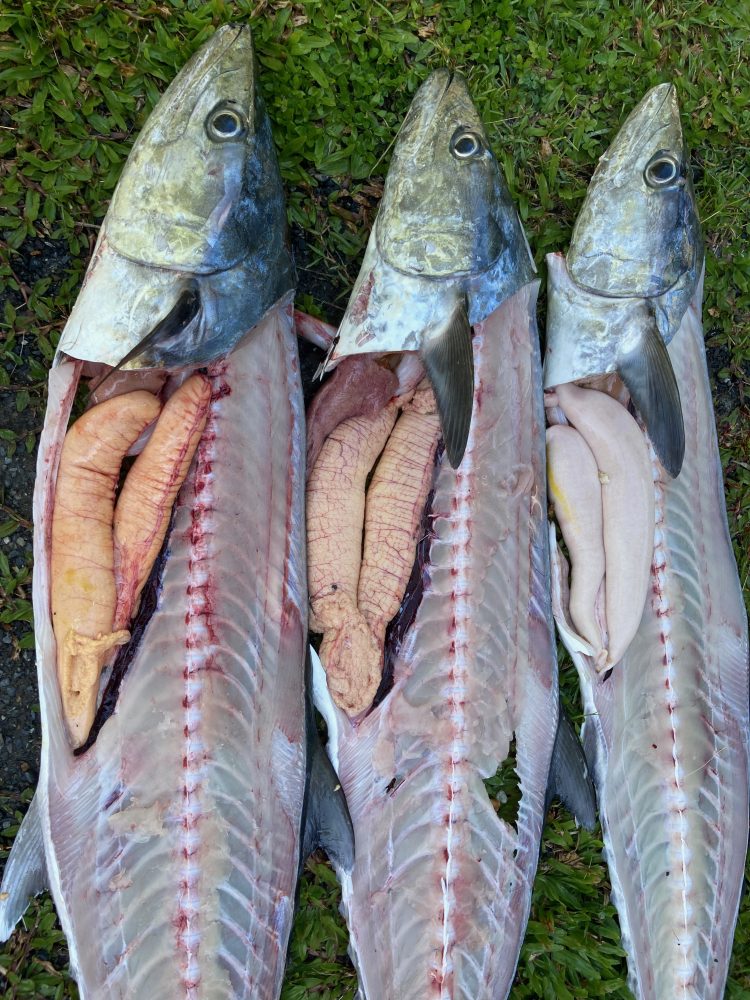 Highly developed aggregating ECSM. Estimated at around the Stage 3 mark these fish were moving through Keppel Bay in September 2021.

True! But it doesn’t help the fishery. Instead, after years of “following” the economic model and ignoring scientific advice we find that our ECSM stocks are down to a base level of 17% which is, 3% below the minimum base reference limit of 20% of unfished spawning biomass – a level which, in reality and under the guidelines of the Sustainable Fisheries Strategy, triggers an immediate shut-down of a fishery unless extreme social and financial hardships justify otherwise.

It is therefore good to see one of the objectives of the Sustainable Fisheries Strategy is to manage the fisheries under the “triple bottom line scenario – social, economical and ecological”, where all aspects of human intervention are considered for the sake of the fishery and the long-term sustainability and viability of those within it.

The stock assessment: there are those who deny the rigor and robustness of the data that went into the modelling.  As a thinking fisherman I too, had my doubts and asked questions in the first (and second) instances.  These questions were more along the lines of how the data were used in multiple scenarios and in combination with other sets of data. And not of the data itself.

This position is as much about personal involvement in the fishery from observations, fishing experiences, long-term catch results, trends in technologies employed and fishing equipment used, and as importantly, being involved with other fishers both recreational and commercial over a 47 year period extending throughout almost the entire range of the ECSM at one time or another, as it is about looking at the data presented and referring to how it is incorporated into, and used within, the model. The data fits my own personal experiences. 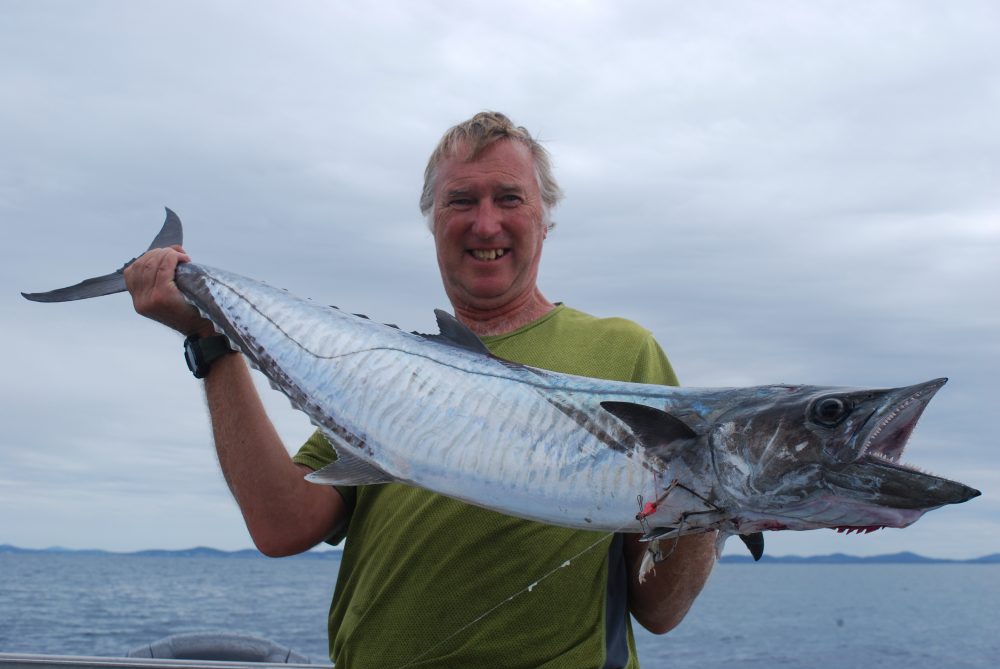 Fishing mate “Sister Maureen”, a Kiwi, with 9kgs of Barren Island Spanish. Note the slime attached to the leader. This fish was gearing up to travel. They were gone the next day.

It is hard for newcomers, or fishers with little past involvement in the fishery to begin to envisage what the fishery looked like, or how it performed, 45-50 years ago. My records showed consistent catches of fish from known locations, on favourable tides, under certain weather conditions, and at specific times of the year. These notes started way back in 1976 and went through to 2015 when I headed off around Australia for a few years. They reflected almost a mirror image of what science was saying – “the fishery is in a steady and systematic decline”. As a lay-person, I dismissed it as – “more fishers entering the fishery means the SAME catch shared amongst more anglers”; a reasonable assumption. But when I finally found out that many of those most recent fishers were not catching “my fish”, the penny dropped – the fishery was indeed, in trouble. I began to take closer note.

Where were the schools of Spanish? Once so numerous that if they were to remain stationery one could walk half a kilometre across the water from the bommies wide of the SE corner of Flat Island to the island itself.

Or, why start fishing when it was a spectacle just to sit on the ice box with a cup of coffee and watch away to the NW of Conical Island as hundreds of greys and Spanish would be rocketing skywards, cleaning themselves of the slime they develop to lessen friction when travelling. There were there to feed. They were happy. And so were we. The fishing could start after the next coffee. The fish would still be there. These events don’t occur any more.

The data that has been gathered by fisheries scientists and researchers for the stock assessment modelling is the best we have. It may not be complete. It may not be perfect. It may not reflect one’s own personal opinion. But, it has been subjected to stringent peer review for integrity and competency in the modelling process. Its source is both long term and recent.

Last week I was questioned by two fellow recreational fishers re my position of support. They knew full well, depending on outcomes from future discussions and decisions by Fisheries Queensland, that I could loose more than 90% of my offshore fishing and that I would have to incorporate other fishing experiences to offset this loss of my beloved Spanish mackerel. They were decent young blokes and I feel that they were trying to be helpful. One informed me, “2021 was the best year that they have had on Spanish mackerel!” I asked them for comparisons. They replied, “the year before, 2020.” 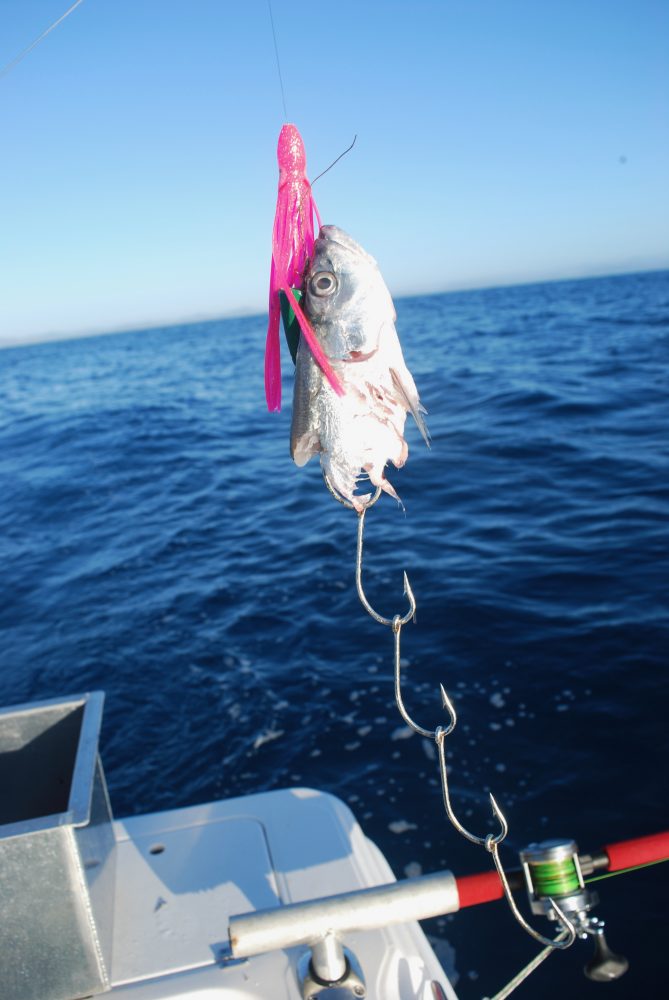 After all of these years it still amazes me how they miss the hooks! The bait was a ribbon fish (Wolf Herring)

I explained to them, that last year I did 18 trips chasing Spanish. It was my worst year ever. However, of those 18 trips, three were as good as any trip ever experienced with a bag limit of three fish taken in under half an hour each trip. It is a matter of perspective.

We are at a critical stage of discussions about the ECSM. I urge recreational fishers to treat social media reports about management conspiracies and stock assessment modelling based on dodgy data.

We have a stock of fish that without our immediate help may fail.

We have a responsibility to support the implementation of management decisions that will rebuild the stock above the base reference level in a given set of timeframes. We owe that to future generations so that they too may experience fish abundance and behaviour like people of my generation have been so fortunate to witness.