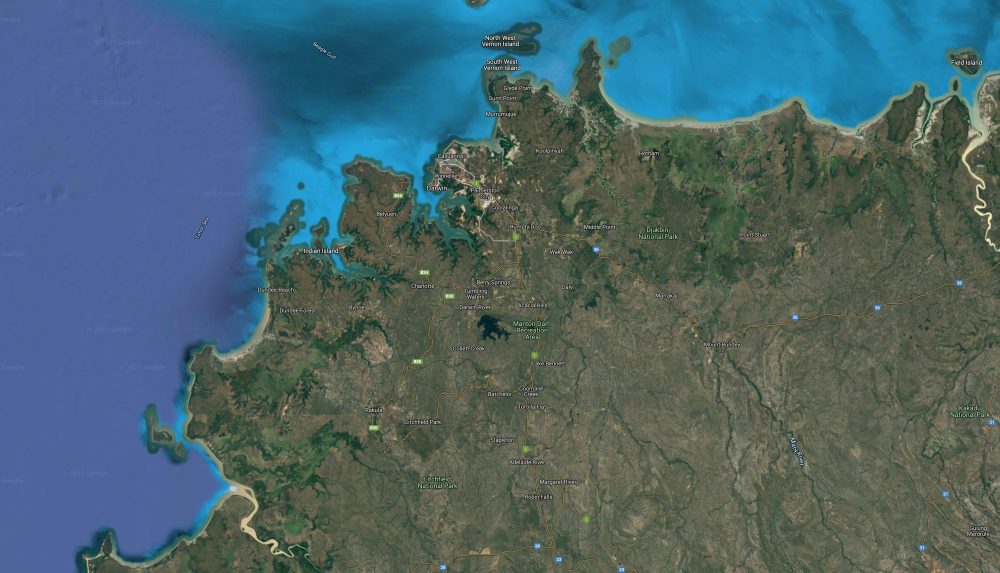 The Darwin region has so much to offer for both the resident, and visiting anglers. In this article, Darwin based writer, Chris Errity covers some of the hot-spots close to the Darwin CBD.

Cape Hotham can be accessed from two public ramps just about all year round. Leaders creek fishing base and salt water arm both on the Gunn Point road about an hours drive from Darwin. Cape Hotham is an area rich in reef and pelagic species and can also provide some great barra fishing in several small creeks on the eastern side. The area fishes well during the Wet season from April to May and during the build-up months of September to December when the water temperatures are rising and the weather is good. During the dry season from June to August, the prevailing easterlies can make fishing this area difficult, but not all together impossible. Good fishing can still be experienced during the dry, but monitor the weather and only fish when the winds drop off.

The creeks fish well for barra on the neap tides when the water is cleaner and the reef fishing for golden snapper and jewfish is also better during the neaps when the current does not run so strongly. There are many areas of reef near Cape Hotham and Ruby Island around the eastern side of the cape. There is also a great hole in the reef near Ruby Island that fishes well for jewfish at times.  The pelagics fire up in this area just after the neaps while the water clarity is still good and the tides are building. 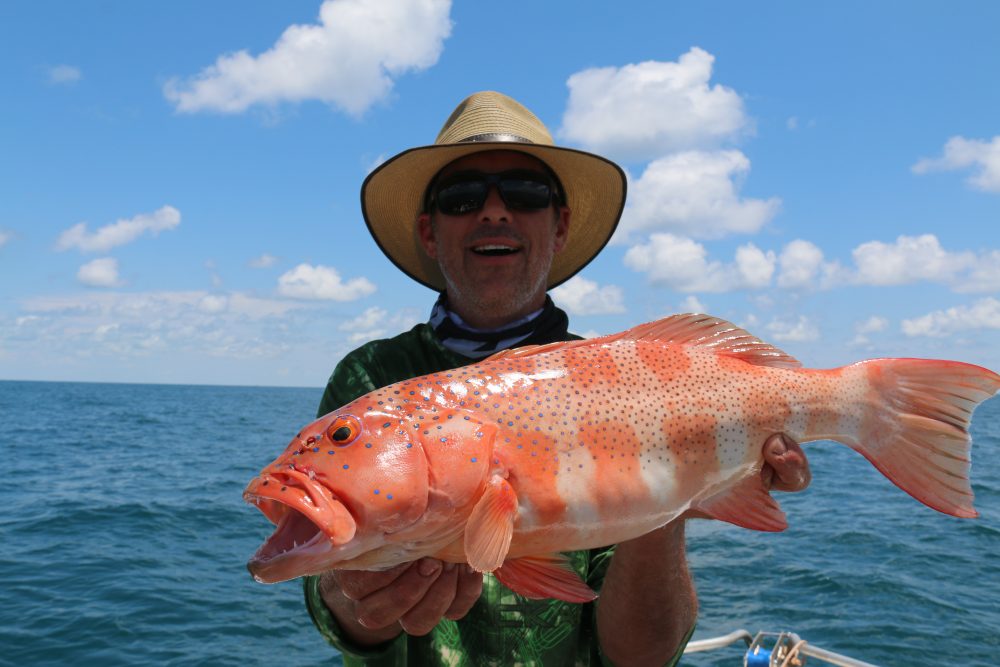 Mark Reinbott caught this nice trout on a berkley gulp.

The Vernon Islands can also be accessed from Leaders creek fishing base and fish very well all year round. Once again be aware of the prevailing conditions as the huge tidal movement at the Vernon’s and strong winds don’t mix. This area fishes best during the neap tides and just after the neaps. During the spring tides, there is massive tidal movement, which make the fishing difficult, but fishing during the change of tide at these times can provide some exhilarating sessions. Reef fishing occurs in the main channel between Gunn Point and the South west Vernon in deep water up to 40m only during the dead neap tides for golden snapper, red snapper and jewfish. The blue holes also fish well in this area for varied reef and pelagic species during the neaps.

The Vernon’s are well known for their mackerel fishing, particularly during the dry season. Large Spanish mackerel frequent this area during this time of year as the water temperatures drop. They can be caught trolling and jigging lures over pinnacles found between the islands and on the northern side towards Melville Island. Many Queen fish and trevally along with long tail tuna and grey mackerel can also be caught in the area and on the reef edges around the islands. 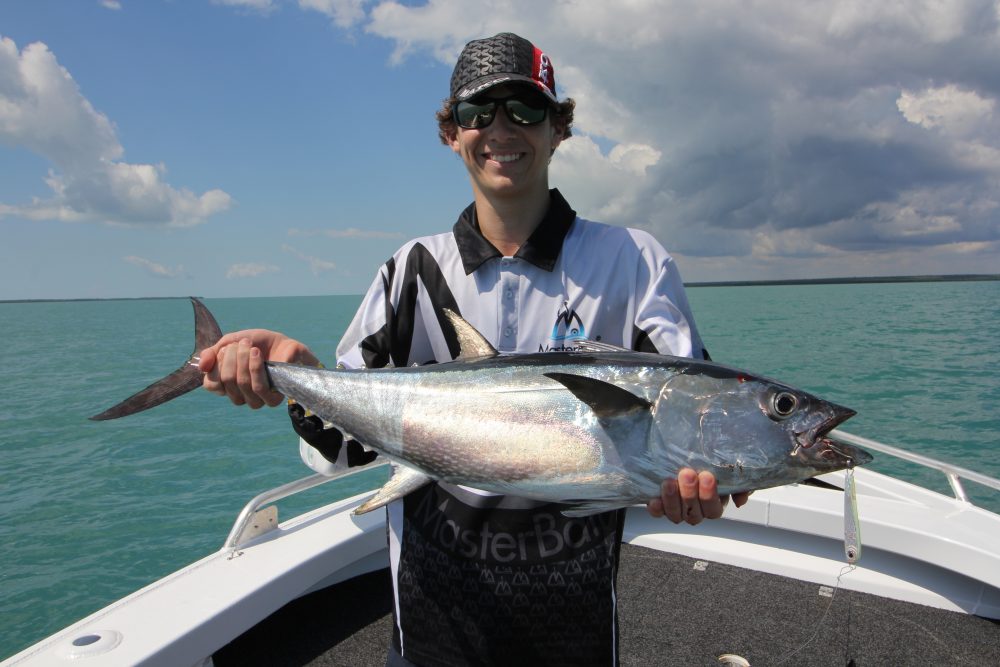 The Fenton patches are an area of artificial wrecks on reefy ground around 30km north-west of the Nightcliff boat ramp. This area has some great reef fishing around the numerous artificial wrecks in the area and can provide some great jigging action on the pelagic species that often congregate around the wrecks as well. Once again this area fishes well during the neap tides when the water clarity is good and the tidal movement less. This is a difficult area to fish during the Dry season as it is so far out to sea and there is little shelter from the prevailing easterly winds. It fishes much better just after the wet and during the build-up months when the seas are much calmer.

This area is also well renowned for sailfish during the build-up months from September to December. Bait schools gather in the area at this time of year, which attract the sailfish and small black marlin. They can be targeted trolling small swimming or skipping baits such as garfish and mullet preferably around the bait schools when you locate them. Teasers are also extremely beneficial when targeting billfish.

The South gutter is located to the north of Charles Point and the North Gutter is located about 10km north of the Fenton Patches. These areas feature deep gutters running from north to south that fish particularly well for reef fish during the neap tide phase when reef rigs and jigs can be sent to the bottom relatively easily. Reef species can be targeted in this area around structure in the channel and along the edges of the channel. During the neap tides the water clarity improves immensely and pelagic species along with billfish are known to frequent these areas. Some extremely large black marlin have been encountered in these deeper waters, so if you are targeting billfish specifically you need to take along at least one heavier outfit to be able to handle these larger fish.

The North gutter also fishes well for Spanish mackerel and trevally during the spring tides when the tidal flow increases. They can be targeted in deeper areas with large metal jigs that get down deep quickly against the current. When you find a school of these voracious predators it is best to drift over the reef dropping your jigs into the school and then retrieving at speed to get their attention. This works particularly well on mackerel, which will quite often inhale a jig on the drop, so make sure you use a wire trace to minimise your loss of tackle. 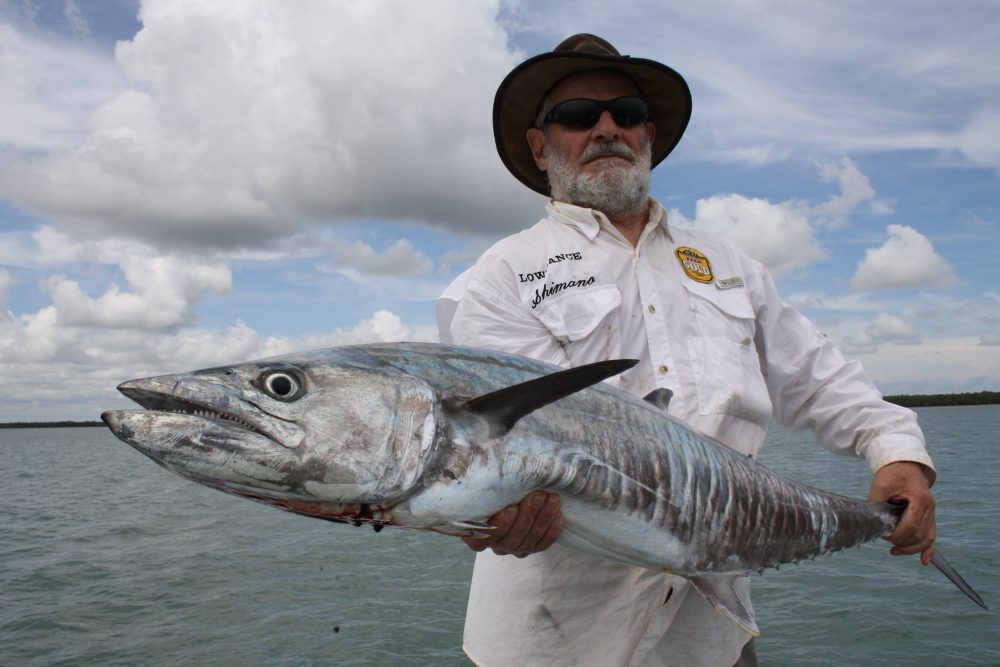 15kg Spaniard caught by Tony Errity trolling at the Vernons.

Charles Point is an extremely popular area for reef fishing with jewfish and golden snapper being the main targets. Once again, this area fishes best during the neap tides and particularly at night. The larger jewfish seem to become more active at night in this area and are prevalent on reef edges in varying depths. Jewfish can be targeted using fresh squid and fish baits, but also respond well to jigs, soft vibes and plastics. A little wider off Charles Point the pelagic species can be targeted on reef edges and pinnacles with jigging the preferred method again. Many trevally and mackerel can be caught using this method with jigs up to 100g and brightly coloured being most successful.

Charles Point fishes well all year round, but care must be taken with the weather. It is exposed to easterlies during the Dry season and strong north-west sea breezes during the latter part of the year in the afternoon. This is why many anglers opt to fish this area at night as the weather is usually better. Charles Point is also a convenient place to fish due to its close proximity to Darwin harbour.

Moving round to the mouth of Bynoe harbour to the west of Darwin can be found some amazing blue water fishing around Roche and Bass reefs. This area of reefs about 10km off the coast fishes extremely well for both reef and pelagic species. The Spanish mackerel fishing in this area during the dry season is second to none and every year several large mackerel over 20 kg in size are landed. These fish can be targeted trolling large deep diving lures over pinnacles and by drifting live baits or pilchards in a berley trail over the reefs. Queenfish, trevally, cobia and long tail tuna also frequent this area, mainly during the Dry season months.

When fishing this area in the Dry season, the afternoons are often much better with the easterly winds normally dropping off significantly from the mornings. Reef fishing in these areas is also good with jewfish, golden snapper, coral trout and grass emperor common catches on the reef edges and around pinnacles. Larger boats can access these areas from Darwin and also from Dundee beach. Other areas of access include raft Point and six pack creek in Bynoe. 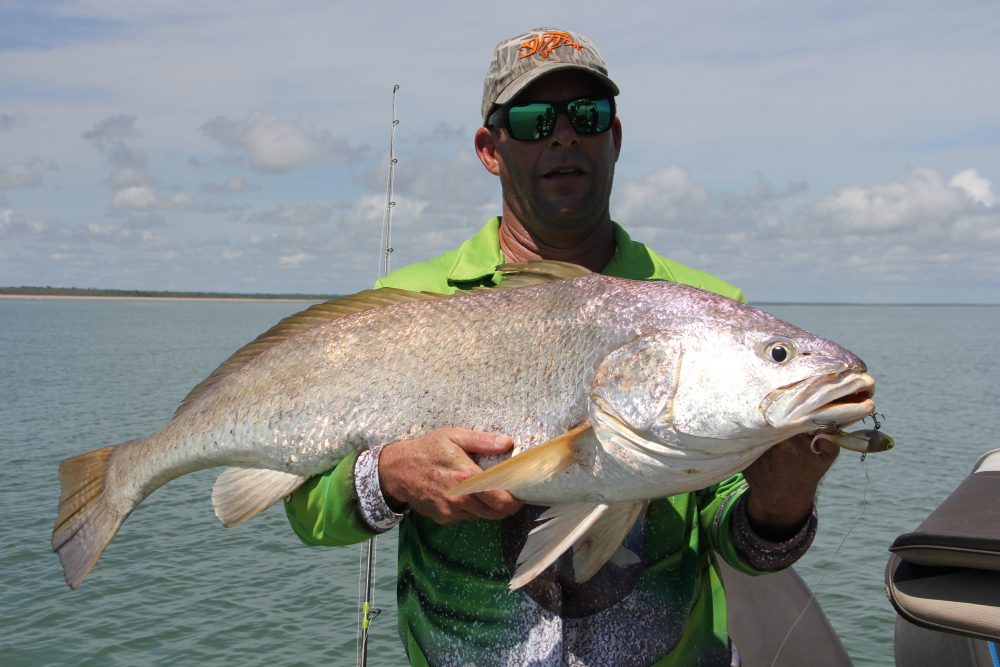 125cm jewie caught on a vibe near the Perons

This is a great area of shoals that are situated around 25km to the west of Dundee beach, which are easily accessed from the Dundee beach ramp. It is an area that fishes better on the spring tides when there is more tidal movement to fire up the feeding fish. Many species can be caught here and it is a great area to chase sailfish. Many sailfish can be caught here from March right through to December with skipping gars being the bait of choice. It is not uncommon to raise up to 20 sails per day when the fishing peaks. Once again, anglers targeted areas of baitfish around the shoals and contour lines making sure not to troll too close to the shoals and pinnacles as this would almost instantly result in a hook-up on a Spanish mackerel.

This area also fishes well right through the build-up months and large catches of reef fish including the prized red Emperor are not uncommon. I have experienced some incredible sessions on tuna, trevally and cobia around these shoals in the build-up on amazing calm seas. I have come across schools of these fish all working together to ball up massive schools of bait fish and then enjoy the ensuing feast. It is times like this you need to be armed with a sturdy spin stick and high retrieve spin reel like a Shimano Stradic so you can cast a slice onto the edges of these feeding frenzies.

Sail city is another area of shoals off Point Blaze around 30km to the south of Dundee beach ramp. They too are about 25km out to sea and are an area that fishes particularly well during the spring tides. It is an area where currents converge and so large bait schools are normally prevalent. The water is almost always blue and so provides some great pelagic fishing for numerous species including billfish. Sailfish are prevalent in this area, although most caught are small, averaging around 8-10 kg, but still providing great sport on light tackle. Some black marlin have also been encountered in the same area.

This is probably one of the better-known areas to catch red Emperor and quite often, the best method to use is to drift over areas of flat, rubble bottom with fresh squid bait, soft plastics or metal jigs. Other good eating reef species like coral trout, golden snapper and grass Emperor can also be caught using this method. Sail city is also a great area to troll for Spanish mackerel. There are some pinnacles out there that are swarming with marauding schools of mackerel. 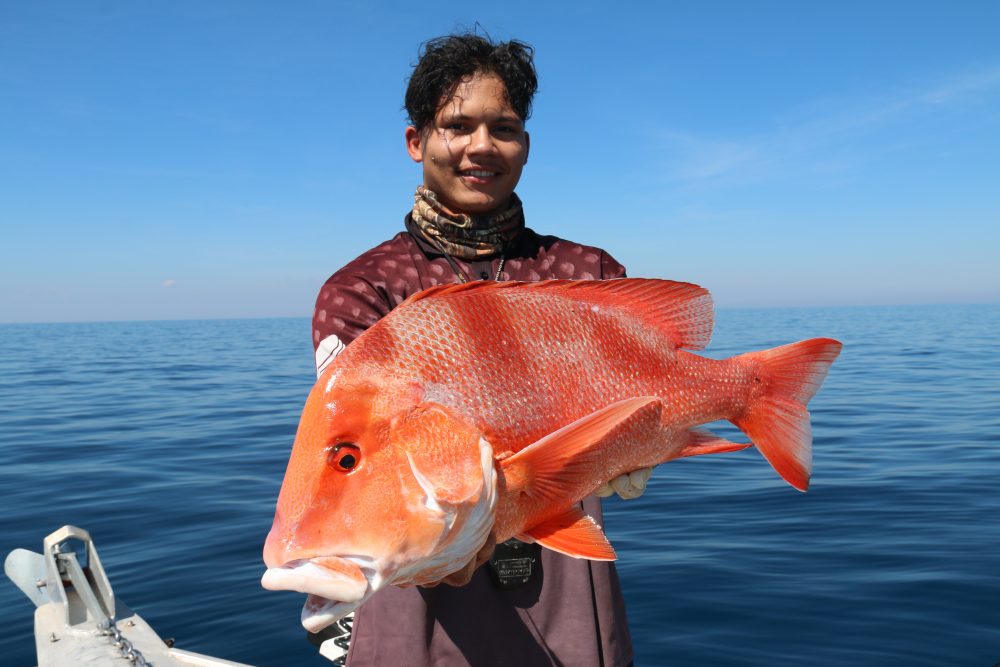 Liam Xuereb with a nice red from Dundee wide.

The Peron Islands are at the mouth of the Daly River about 60km south of Dundee beach. They can be accessed from Dundee beach ramp and from a camp ground and ramp at Channel Point adjacent to the islands. Channel Point is usually only accessible after the Wet season in May. There are several areas to fish around the Peron’s and the first is the channel just off the beach at Channel Point. This is a proven hot spot for jewies and fishes best during the neap tide phase. Look for around 10-13m of depth on the edge of the channel to increase your chances of landing a jewfish and as always after dark is usually more productive. It is difficult to go past a fresh squid or fish bait when fishing for jewfish, although they do respond well to a variety of jigs and soft plastics.

The pelagic action around the Peron’s is also impressive. The southern tip of the South Peron Island provides some excellent light tackle fishing on Queen fish, trevally and Spanish mackerel. Trolling large minnows through this area will just about always result in a hook-up on one of theses species especially when working the neap tides while the water is cleaner. Bateman shoal around 8km to the west of the Peron’s is another excellent area to target Spanish mackerel, long tail tuna and sailfish.