Spanish Mackerel – An Icon Under Threat- Part 1: By Bill Bowtell 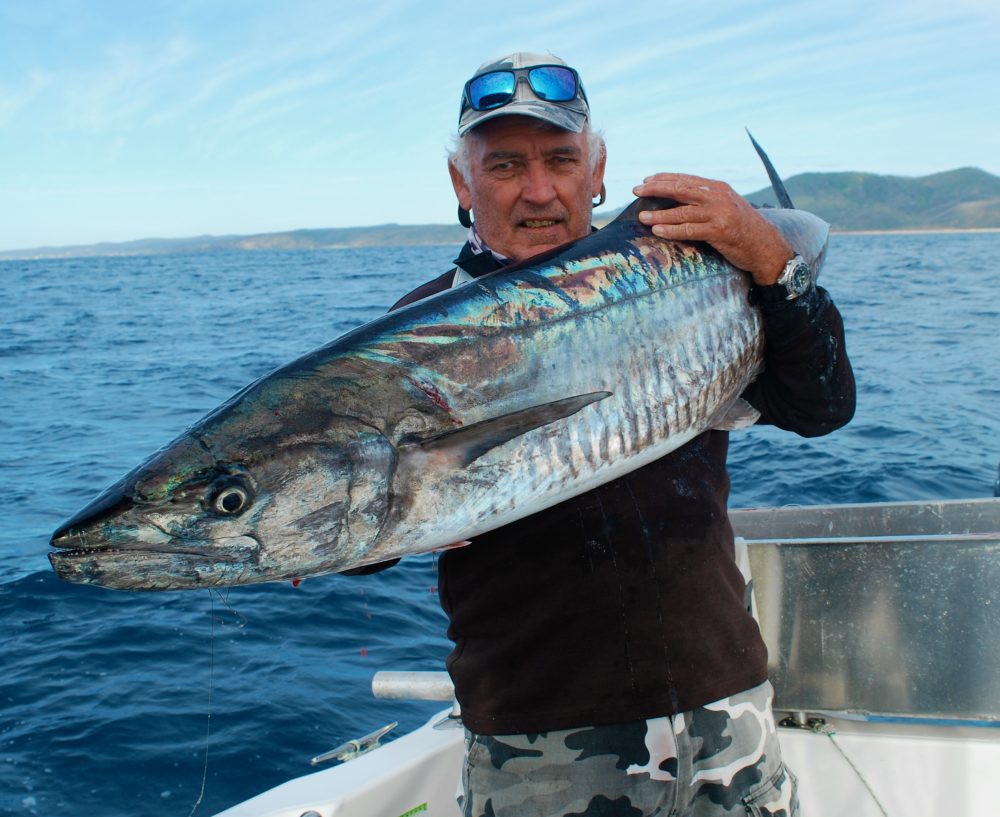 The run-out tide pushed wide of Sunken Reef forming a clear, and very distinctive, current line in the process. A flock of Little Terns wheeled and dived in the distance, way out at the end of the current, where it washed off of the reef and into the deeper waters beyond the Keppel Group of islands.  Fish could be seen working at the surface; they cut the surface in a knife-like fashion.  Certainly not tuna.  I went to investigate.

The Viking was positioned to seaward of the surface action.  These were big fish and they were moving nor-east with the current. Feeding as they went.  It all made sense.

A long cast was laid out with my Seascape 6:1 overhead and Butterworth JS980 rod combo.  The lure, an 85gram Maverick Taipan, splashed down wide, and behind, the moving school of fish.  The side pin on the centre-shaft of the reel was engaged, the reel clicked into gear and the lure was ripped back through the school of fish at a frightening speed.  The hook-up was instantaneous and solid.  It was an epic battle.

The fish was a sleek, steely blue, tiger striped, Spanish mackerel of a  shade over 23 pounds in the old scale, or 10.4kg in today’s metric times.

It was the start of a love affair with these iconic sport, and table fish, that has lasted 46 years and stood the test of time, and often distance.  However, this love affair is now under threat; why? how?

During 2016 significant consultation was undertaken by Fisheries Queensland to gauge the community’s perception of how the State’s fishery resources were both used and managed (sustainably, or not!)  There was a general acceptance throughout that, the (then) management criteria and practices were outdated and did not meet the needs of either those within the fishery, or the expectations of a modern and informed society.  These needs and expectations pointed to the fact that management changes were needed to modernize Fisheries Queensland – a formal review was implemented. 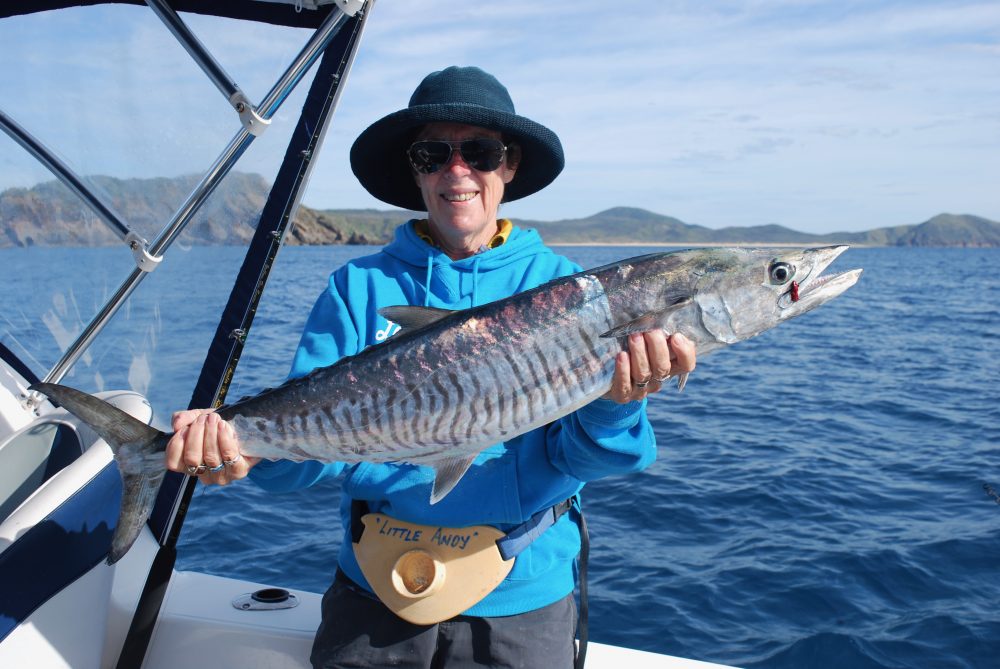 Lorraine with possibly a year two class fish. Spanish mackerel are fecund (capable of producing an abundance of offspring or new growth) and the fry grow quickly to maturity.

The result of this significant face-to-face consultation, and of the more than 11,000 written submissions was that the vast  majority of respondents wanted, or supported, reform in the way the overall fishery was managed.  And how the various fisheries (within the overall fishery) performed.

The outcome was a 30-page document: the blue print of future fishery management in Queensland, titled, “Queensland Sustainable Fisheries Strategy, 2017-2027”, undersigned by the then, Minister for Agriculture and Fisheries and Minister for Rural Economic Development, the Hon. Bill Byrne MP.  (This document can be found on: cabinet.qld.gov.au/documents/2017/Jun/Fish Pol/Attachments/Strategy.pdf.)

This document sets out amongst many things a very clear vision for the future of the State’s fisheries, how they will be accessed, the rules that will apply, adhesion and compliance to these rules and how the fisheries will be managed.

To many, these “areas of reform” may seem obvious, and many fishers today are asking, “why has it taken so long?”  And, “why haven’t these issues been attended to in the past after so many previous reviews?” – “Why hasn’t it been sorted?”  These are valid questions from fishers and they do have the right to get answers. 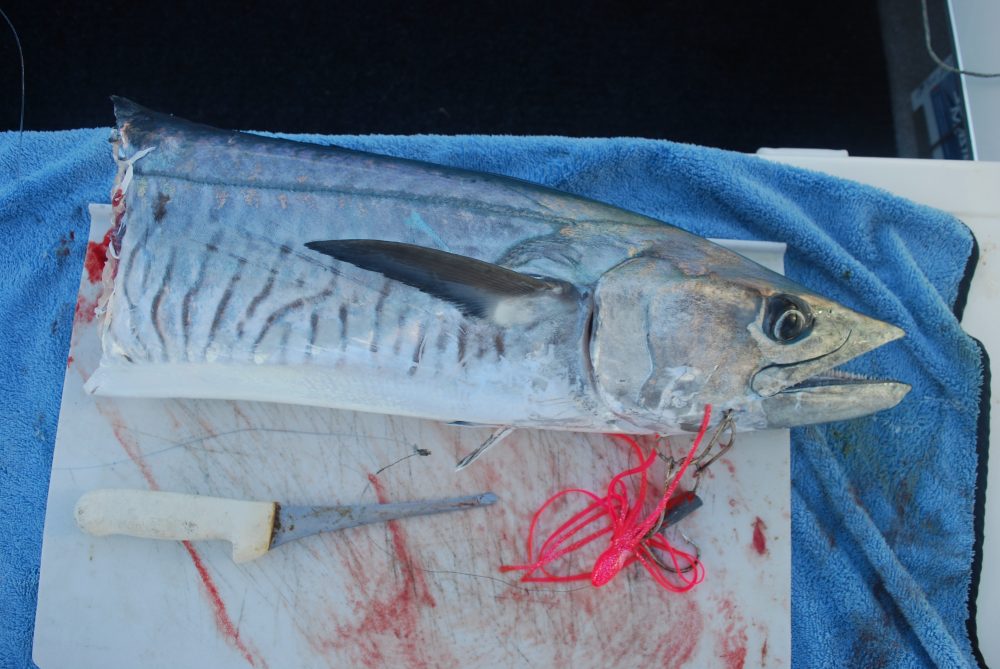 Shark, or barracuda? Depredation on hooked Spanish mackerel is high; but yet, an unknown quantity.

The QSFS is a modern based document.  Underpinning each of the reform areas are a set of “Principles” on which the specific reform is based.  That is to say, these are the guidelines upon which a particular reform will be implemented.  They will be relevant, they will be measurable and, they will be timely.  To achieve these ‘Principles”, in each area of reform are a series of “Actions” – the “how to’s” of getting the job done.  The QSFS is truly an action document, and whilst produced by Fisheries Queensland, some may be sceptical, it does make them (Fisheries Queensland and ultimately the State Government) wholly accountable to what are, community expectations!

In December 2020, as a direct reform requirement within the Fisheries Queensland’s Sustainable Fisheries Strategy, the Harvest Strategy Policy was released for public consultation.  The consultation on this document closed on 31st January 2021 and is yet to be finalized. (A draft copy of this document can be found on:http://daf.engagementhub.com.au/draft-harvest-strategy-policy.) 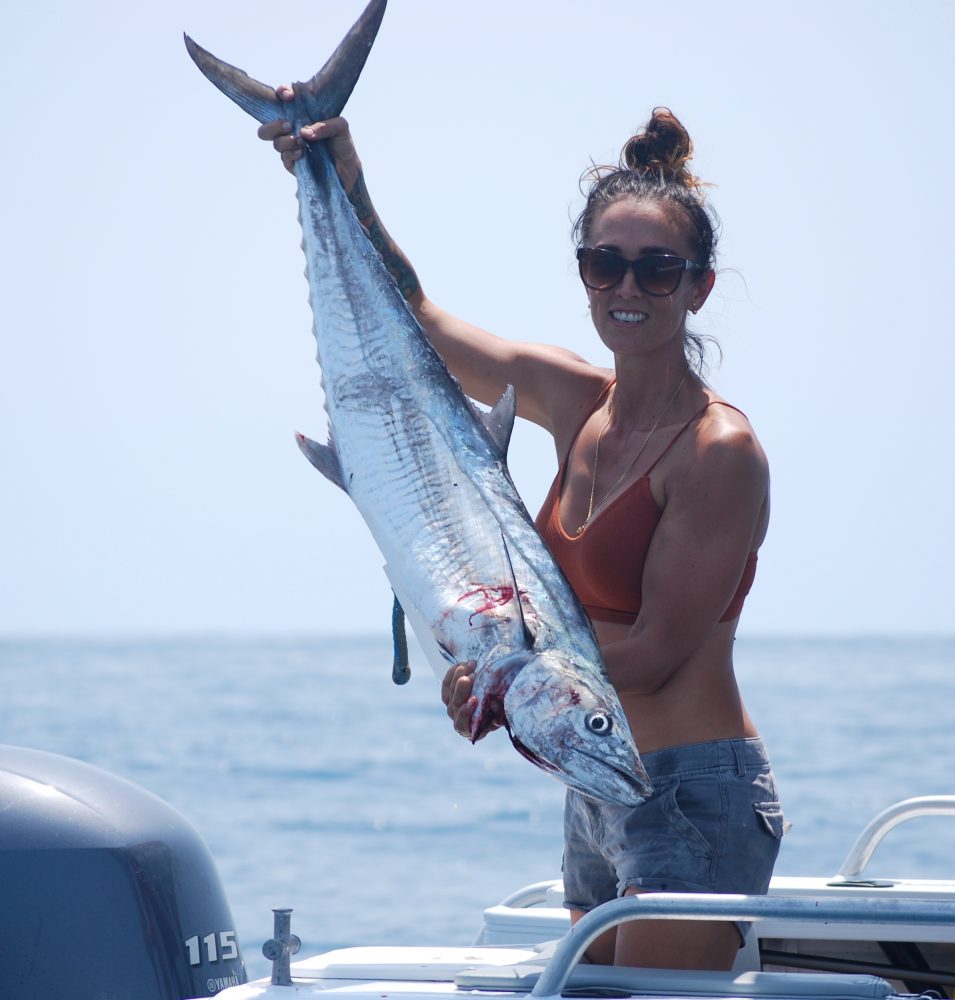 Summertime mackerel from the Capricorn Coast area of Queensland.

“Harvest strategies provide a transparent and predictable decision-making framework for fisheries management.  As responses to fishery conditions are considered and documented up front, this provides greater certainty for fishers, managers and other stake holders and avoids ad hoc decision making.”(Sloan et al. 2014)

There are 20 prioritized fisheries identified for development of harvest strategies within the draft Harvest Strategy Policy.  Spanish Mackerel is one such prioritized fishery and one which is currently under revision.

The Harvest Strategy as set out in the QSFS is a tool for management of the specific fisheries identified within the overall Queensland Fishery.  As such it is driven by the elements which include:  assessing biological and economic conditions of the fishery, and the decisions that determine what actions management need to take to ensure to economic viability of the fishery and setting catch limits to ensure sustainability.  Such management actions may include:

So the framework, the plan of accountable action for modern management of Queensland’s fisheries, has been set out.  To date two specific fisheries, the Reef Line (Coral Reef Fin Fish, including: Coral Trout, Red Throat Emperor, other coral reef fin fish species) and the Spanner Crab fishery have approved harvest strategies in place.  A harvest strategy for the East Coast Spanish Mackerel is now under review. 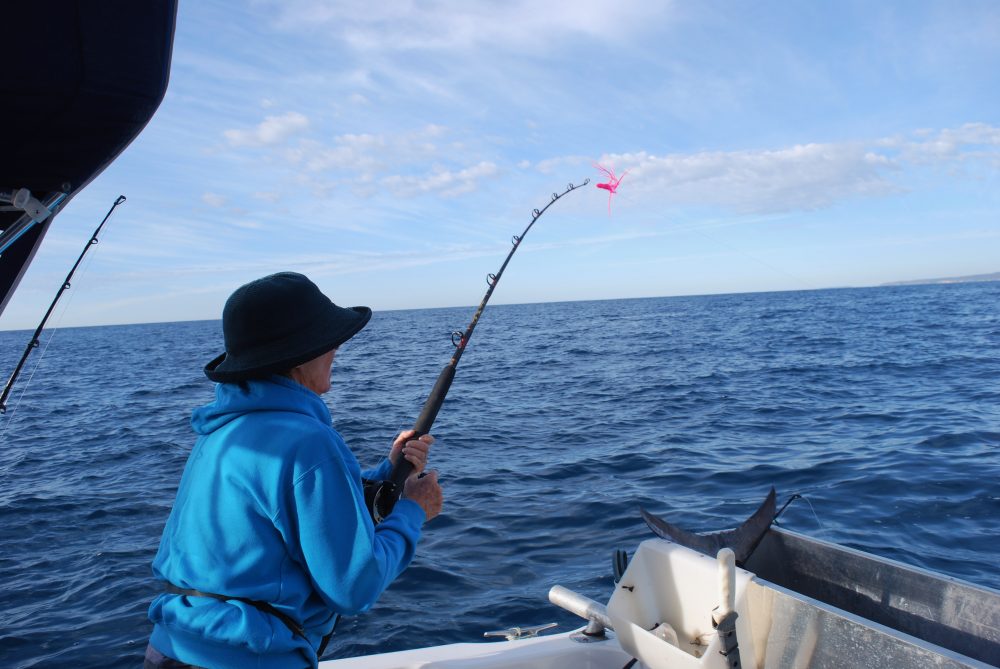 The girls can do it too! Lorraine fights a big Spanish.

The review process undertaken by Fisheries Queensland is through face-to-face Fisheries managers, scientists, compliance (QB & FP officers), commercial fishers, recreational fishers, Great Barrier Reef Marine Park Authority managers, environmental representatives and indigenous representatives; and other invited specialists presenters as required.  The East Coast Spanish Mackerel (ECSM)working group is composed of this representation (although not all positions are entirely filled).  The inaugural meeting of the ECSM working group was held in Brisbane on the 17th and 18th May 2021. (Visit https://www.daf.qld.gov.au/business-priorities/fisheries/sustainable/fishery-working-groups/spanish-mackerel-fishery-working-group/communiques/17-18-may-2021.)

In keeping with the QSFS and the Harvest Strategy’s principles and list of required actions, presentations were delivered by scientists which covered, stock dynamics, states of the fishers, current stock assessments (2020-21), and monitoring and research priorities (on-going since 2004)  The outcomes of these presentations did not place the stock of ECSM in a sustainable position at the current level of overall take by all fishers, commercial, recreational and charter.  Listed are several factual points from these presentations. 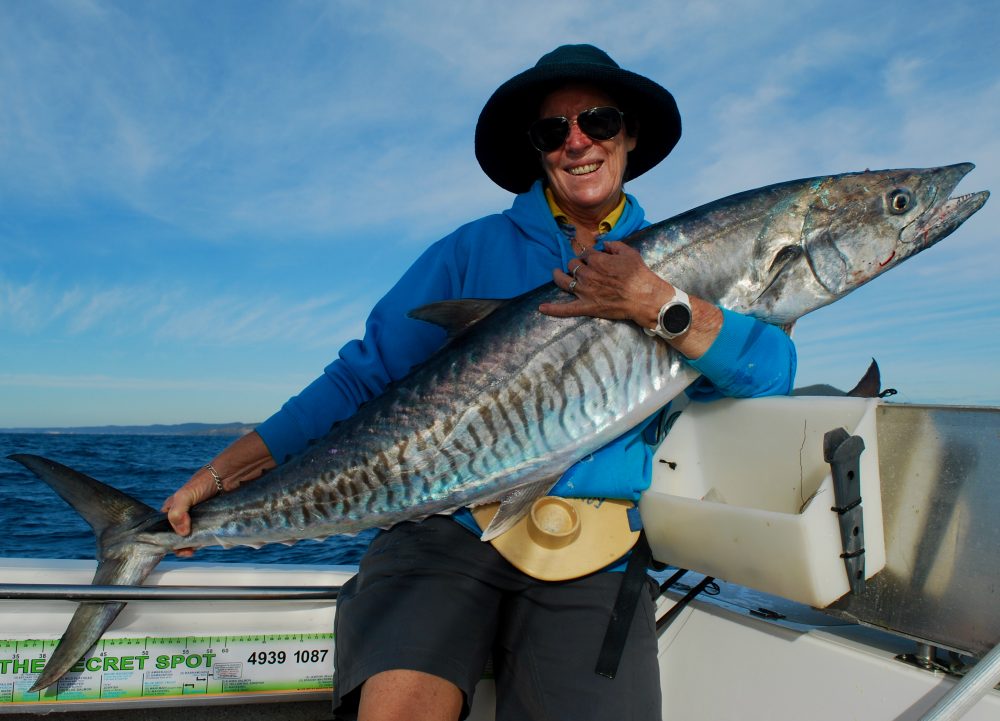 One happy girl with a local area fish of 20kgs.

So where does this leave the fishery and those who love to catch and eat Spanish mackerel?  Obviously the Spanish mackerel need help if they are going to survive into the future.  The model used in the stock assessment is under peer review to ascertain the level of confidence in the latest results.  In conjunction with this peer review of the model itself, the working group, at the request of the recreational fisher’s representatives, will also receive a presentation of how the recreational catch data was compiled e.g., Keen Angler cards, boat ramp surveys etc.  For as they say with any modelling program (no matter how good the algorithm are); “Garbage In = Garbage Out”.  And there are many asking such questions.

This review needs careful consideration by all interested in the plight of the Spanish mackerel.