“Spanish Mackerel – An Icon Under Threat” Part 2 – By Bill Bowtell 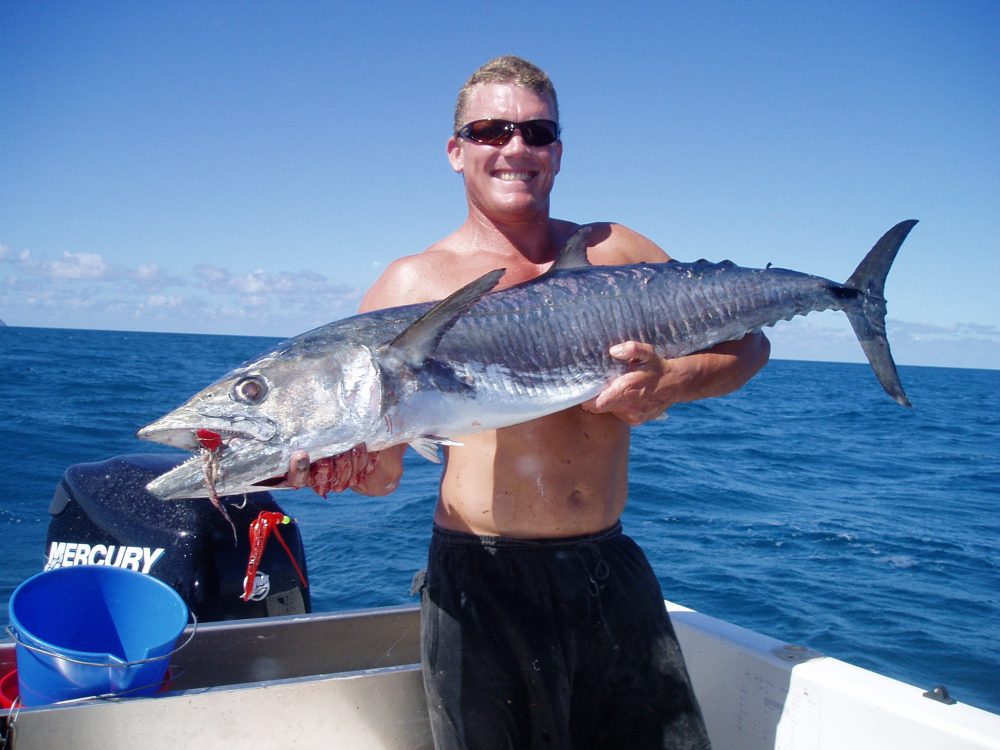 It seems from comments received with regard to last month’s part 1 of this article; “Spanish Mackerel – An Icon Under Threat”, that there are many, both recreational and commercial, out there who have concerns, not only for the Spanish mackerel fishery, but indeed, the ability of Fisheries Queensland to manage it, so as to meet community expectations.  And these expectations are broad, and delve as far back into the past, as they do (going forward) into the future.

As a member of the Spanish Mackerel Working Group (SMWG) representing the perspectives of the recreational angler, but also having a long association with fishers who rely on fishing for their livelihood, it has been encouraging to have received so many text messages, phone calls and emailed submissions of your concerns and your expectations. Of particular interest was to receive feedback on both the Sustainable Fisheries Strategy and the Harvest Strategy (ies) to date. All responses were positive. But, as many stated, “

… whilst both documents are comprehensive and highlight what needs to be done having the resources and the will of government to do it, is another thing.

We have heard it all before!” And that can’t be argued!

It is of no coincidence then, that the opinions of both sectors; industry and recreational, are almost to an arrow-tip of where they see the fishery heading and where they want it to be.  Put simplistically, the emphasis was: the fishery must remain; it must be sustainable; it must service the community, but in doing so, those within the fishery must be economically viable; the fishery must be robust; the burden of recovery must be borne by all sectors and participants; science must play a greater role; Fisheries managers need to acquaint themselves with the practical complexities of the Spanish mackerel fishery, recognizing the; “one size fits all”, philosophy DOES NOT apply in this case.  In support of those concerns: 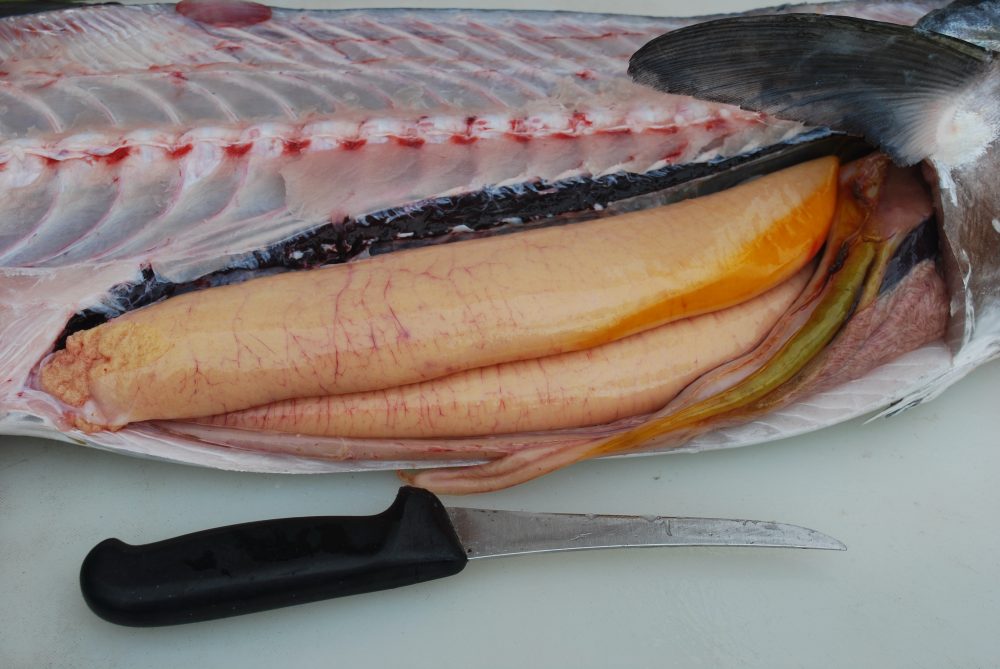 “The Fishery Must Remain”.

Spanish mackerel are a very highly sought-after species by all sectors of the community.  Their status as a pelagic sportfish is almost on a par with that of the barramundi in terms of recreational participation.  The fact that they are very fine table fare, and have a large recovery rate when dressed and filleted, makes them even more desirable to the family fisher.  It is no wonder then that a specific sport, and table, fishery exists within the recreational sector for this species.

Their reputation as a “food fish” in the seafood trade is not lost on the public, or on those who provide the “Friday afternoon, or Sunday evenings” – fish and chip trade to that expectant public.  In that regard alone, again they (Spanish mackerel) are highly desirable and bring a premium price to both the supplier and the retailer.  The public love Spanish mackerel. A very large percentage of the commercially caught east coast Spanish mackerel fishery is utilized in this way.

Commercial fishers’ operation in the “Line Fishery” under either al “L1, L2, L3 or L8” symbol are highly regulated under “Regulation”.  The SM (Spanish mackerel) endorsement, allows the taking of Spanish mackerel under quota.  Many fishermen were granted quota upon application following various reviews of the Reef Line fishery. It (the quota) helped them adjust financially after the Reef Line review.

Others within the commercial fishery, with more substantial quota, operate within the broader fish wholesale business. Spanish mackerel are their primary source of income.

Whichever the case, the expectation across all sectors and within the community is that, Spanish mackerel will remain available!

In my discussions with others, I have asked the questions, “what is: sustainability?” and, “what does sustainability mean to you?”  For we read, and hear, this term used many times in reference to our fisheries, in particular, the Spanish mackerel fishery.  Personally, I have always struggled with the term, and yet the leading document governing the management of our fisheries is titled “Queensland Sustainable Fishing Strategy”.  We read; “sustainable access”, “sustainable fisheries”; “sustainable use of”, “sustainable way”, among other “sustainable” references used throughout the document. And yet, the responses I received when asking the questions, were wide and varied. 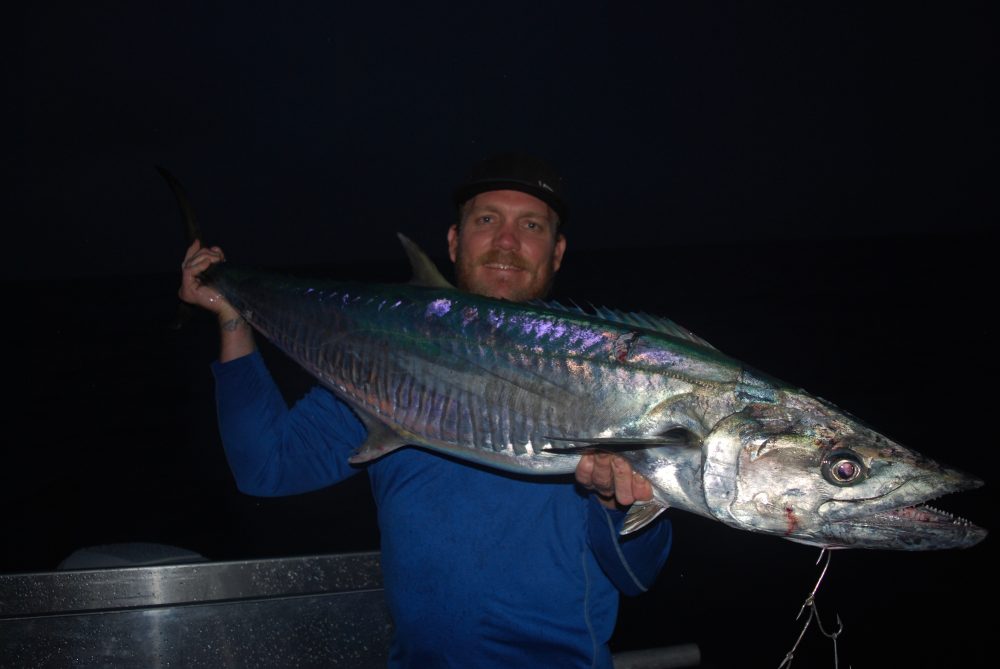 A night time ECSM taken on a rigged squid by Andrew Bowtell.

The word, “sustainable” is an adjective – a describing word.  Therefore, one would assume, that a “sustainable fishery” be one that is “able to be upheld, or maintained, or prolonged”, which is the meaning of sustain in the case of the fishery.  And yet referring specifically to the East Coast Spanish Mackerel fishery, how can the fishery be maintained, upheld or prolonged, when presently there are fishery practices which not only impact on the current stock of Spanish mackerel, but conflict with how Spanish mackerel can be taken under Regulation?

For the commercial fisher, Spanish mackerel can only be taken by line. For the recreational fisher, by line, or spear.  Any other method and the fish must be returned to the water.  It has to be realized, recognized and accepted that this is not always the case.

These fish are not being returned to the water as required under Regulation.  In reality, it would be an injustice to do so, because nearly all of the fish being taken from these nets are dead.  They would  better service the community in the fresh fish trade.

And herein lies the conundrum for fishery managers in the statement: “sustainable fishery”.

The netting of Spanish mackerel, incidental, or not, does several things to the fishery which practicing and practical fishers note and understand.

Firstly, all Spanish mackerel landed must be recorded under the Log Book regulations.  These records are used in the management of the fishery in relation to ascertaining Total Allowable Commercial Catch (TACC) figures and Individual Transferable Quotas (ITQ’s) held by those completing the Log Books.  Fisheries scientists also use this source of information in their stock assessments, and status of ECSM fishery.  It is valuable information.

The question then needs to be asked, “how are these net-caught fish being landed at port?” And, “are they being recorded in a Log Book system?”

Secondly, netting, incidental, or deliberate, of any fish species will break up the school, be it feeding, migrating or aggregation.  Practicing and practical fishers in the Spanish mackerel fishery know, and understand, that Spanish are an obligatory fish i.e., they aggregate and migrate according to size, wind direction, availability of food and season.  They also know that there are “local” areas where resident fish can be found and caught all year round in varying numbers.  Breaking that pattern, or those patterns, of movement into, and out of, these local areas will devoid them of future fish stocks.  And if this occurs in the identified local areas the question must be asked, “what does the impact of offshore netting do to the OVERALL pattern of movement of these obligatory fish?”  Recreational fishers and the bona fide commercial Spanish mackerel fisher are demanding that ALL MACKEREL be a NO-TAKE species in the Net Fishery to avoid the total collapse of all mackerels.  And

…if fishery managers are serious about the sustainability of the Spanish mackerel, then this management change must be a priority. 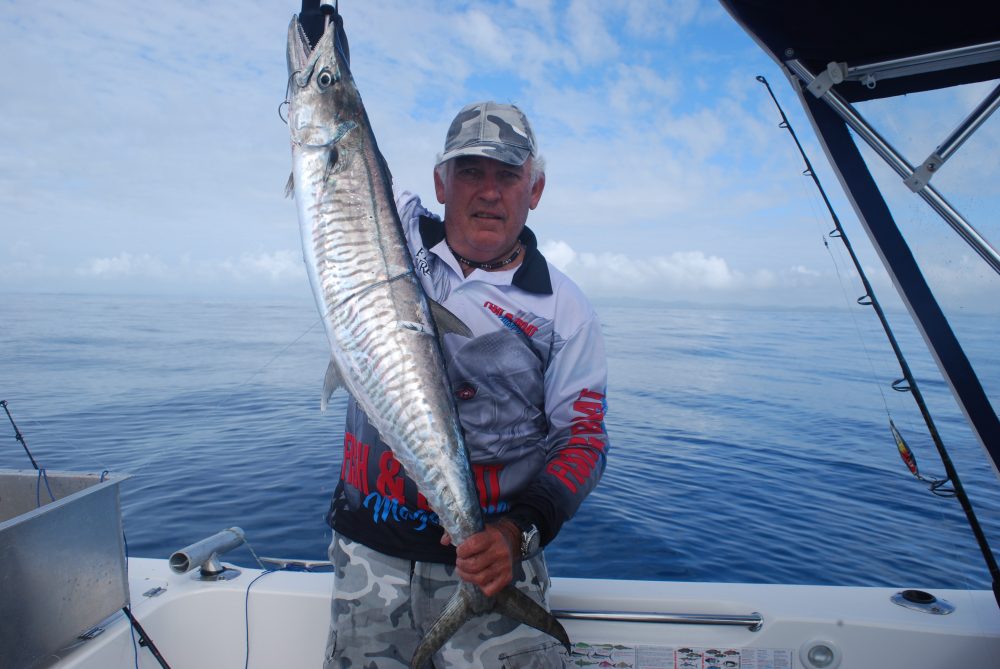 A Robust and Viable Fishery

Management changes in the Spanish mackerel fishery are inevitable given the estimate of the most recent stock assessment at 17% of unfished spawning biomass.  More discussion is needed in regard to this figure as well as the issues surrounding the figures that were used in the initial assessment.  However, even if the +/- 10% error is positive and the stock assessment is 27%, it still falls short of the 40% target figure listed in the Fisheries Strategy, for the year 2020 and places in jeopardy, the aim to have the 60% of unfished biomass figure, by the year 2027.

In implementing any changes to the regulations regarding effort and catch reduction in the ECSM fishery, these changes must be borne equally across all sectors.  The over-arching opinion out there is that the fishery should remain accessible.

The options put forward by the practicing and practical fishers to assist in the recovery of the species are varied from, seasonal closures; area closures; reduced bag limits for recreational fishers; and reduced TACC by way of reduced quota for commercial fishers.

If changes such as these are considered then, any outcomes from these decisions must be measurable, with clear timelines of expected recovery, if they are going to be owned by all sectors and the credibility of Fisheries Queensland is to be taken seriously. Here science plays a major role.

The Role of Science

Unlike land-based management of animals where they can be herded and individually assessed for health and numbers, fish can’t be individually checked, or counted.  And as for their overall well-being; they are left to their own devices.  We just catch them by the most successful means available to us and hope that we have the figures right.  This is no longer acceptable.  For it leads to ignorance, a certain level of arrogance and, it certainly takes away that level of ownership and understanding of our fisheries that is required to access the resource and, not only comply with regulations, but to actually set meaningful regulation that will look after its well-being (in its many forms.) 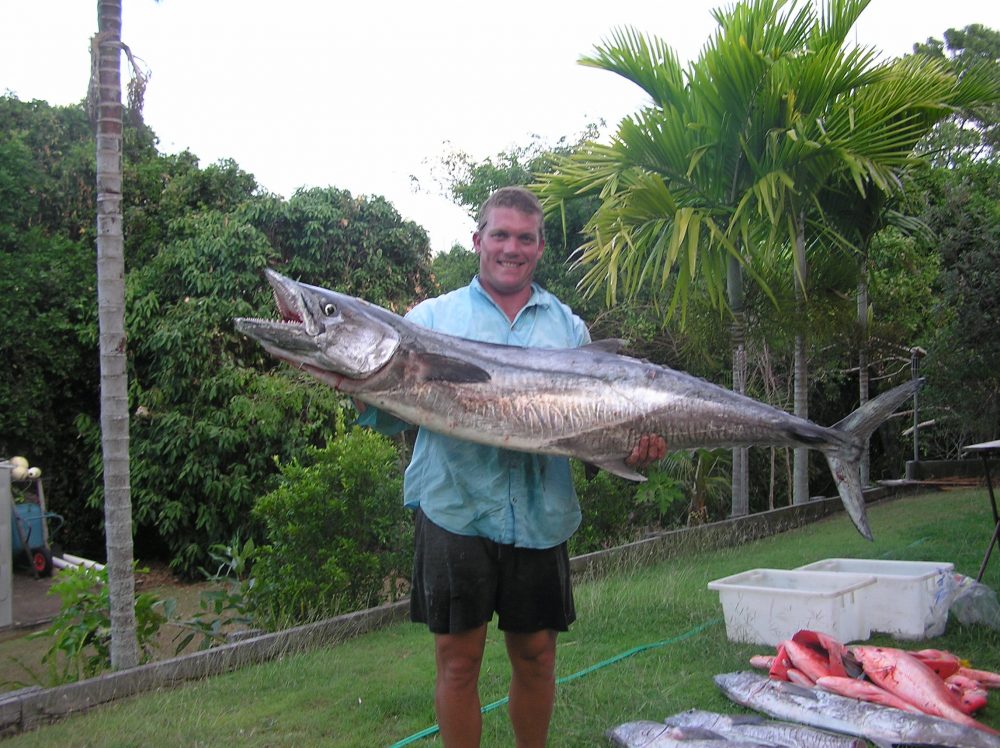 Andrew with a big Cap Coast Spanish mackerel. The frame of this 37.8kg fish went to research.

In the Spanish mackerel fishery, we are dealing with a single species fishery, our science should be complete and strong.  Studies of this single genetic stock have been on-going. References to declining stocks have anecdotally been recorded since 1945, and scientifically reported since 1989.

If science is the key and science is the driver of management changes, then resources of personnel and $’s must be forthcoming from government, to ensure that research and monitoring is timely, meaningful and continuous.

Stocks of ECSM have been known to be in decline since the mid 1970’s, and into the late 1980’s, where in 1989, 653tonnes of Spanish were recorded.  Further decline was identified in 1995 where 351 tonnes of Spanish mackerel were landed by industry. There have been rises and falls recorded along the way in ECSM for the past 20years which have identified stock status and applicable catch rates by industry. This has been consistent and continual research in conjunction with industry, but such has not been the case with the recreational sector.

At the very best, previous research into the impact of recreational fishing on the stocks of ECSM, could best be described as ad-hoc until more recent times, and any previous decisions regarding controls, such as bag limits, to limit these impacts were based more on compliance issues, than the actual catch rates.

Any future research and monitoring of ECSM must be continual. It must be inclusive of all users. It must be timely and meaningful; reporting state trends as well as local and seasonal events.

There are a lot of concerned users out there that feel that there is data within the fishery that is not being captured. And it needs to be.

Recreational fishers need, and are seeking that level, of certainty. They deserve it.

So where does this leave the ECSM and the fishery that has built up around them?

Discussions regarding the plight of these fish and the fishery itself need to be robust and forthright. Science tells us that the fishery is in dire need  of help which is a blight on past management regimes and the governance of former governments. Some management changes to ensure the overall pattern of movement, and the maintenance of local fish stocks are obvious. Others, such as the robustness and financial viability of those within the fishery, or who rely on a robust fishery, are more complex.

I urge all fishers to become involved. 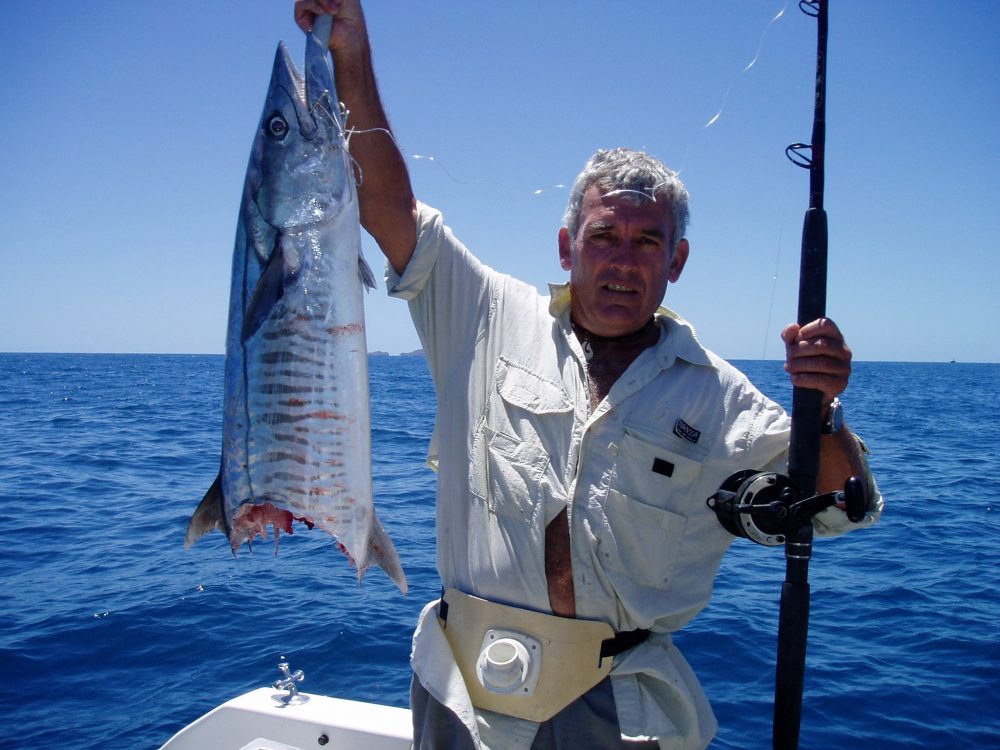 Sharked!!!! A common occurrence these days.