So you have decided to buy a big boat. Part 3- The refit. By Graham Brake 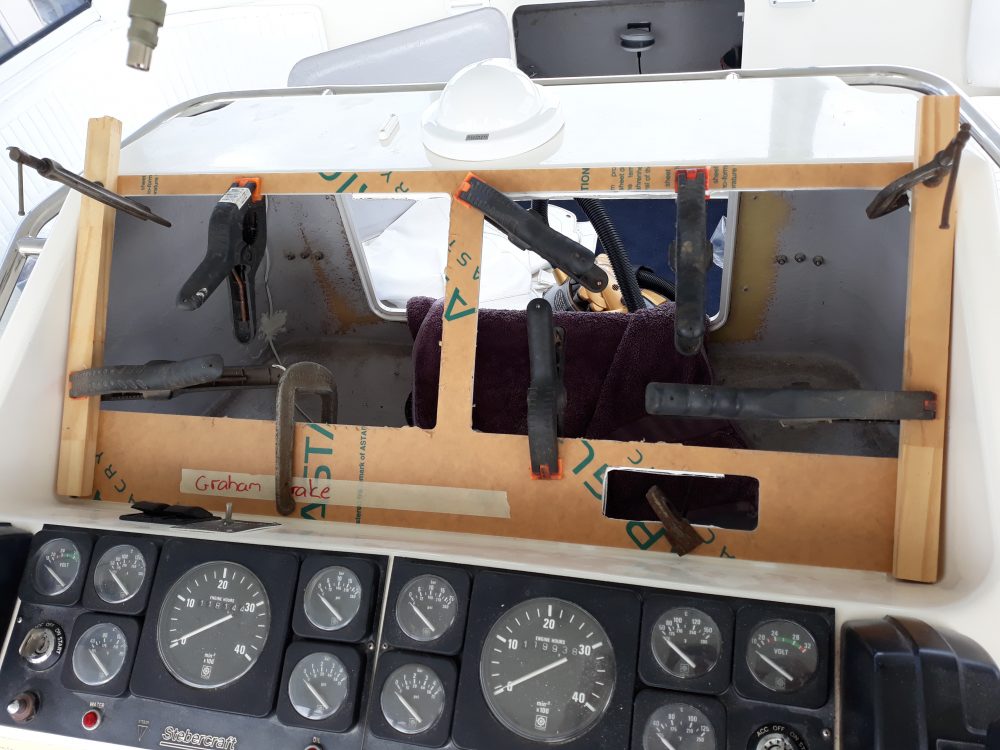 Buying a used “big boat” usually follows a reasonably standard path.  The due diligence involved in the pre-purchase inspections, the negotiations if the inspections are acceptable, the transfer of money and required documents and the delivery to the new home.  What then follows depends on a few things.  The age of the vessel and state of the equipment onboard, necessary repairs and the all-important “wish list”.  In the case of Motorvation the “wish list” and “age of electronics” overlapped and became the number one priority in the drive to return her to the fishing machine she was designed to be.  Now, marine electronics are no different to any other electronic purchase – as soon as you buy them, they are either superseded by a new model or are on special somewhere for way less than what you paid.  The other major consideration (not unlike other electronics) is what brand, and model of that brand, to purchase.

Luckily, we had an ace in the hole here.  Only a few months previously I had been heavily involved in the electronic upgrade of VMR448 Mackay’s Steber 38 and as this retrofit was well in excess of thirty thousand dollars and had to be accepted by the number of skippers who drive her, an extremely in-depth selection criteria was followed before the final choice of brand, models and supplier was made.  In the end, VMR selected Simrad equipment supplied and commissioned by Chris Hoare Marine Electronics, and after many hours of use by different crews, the decision has been vindicated.  So, while the majority of the research has been completed, we did do another check of the latest offerings before once again selecting Simrad as the preferred option. 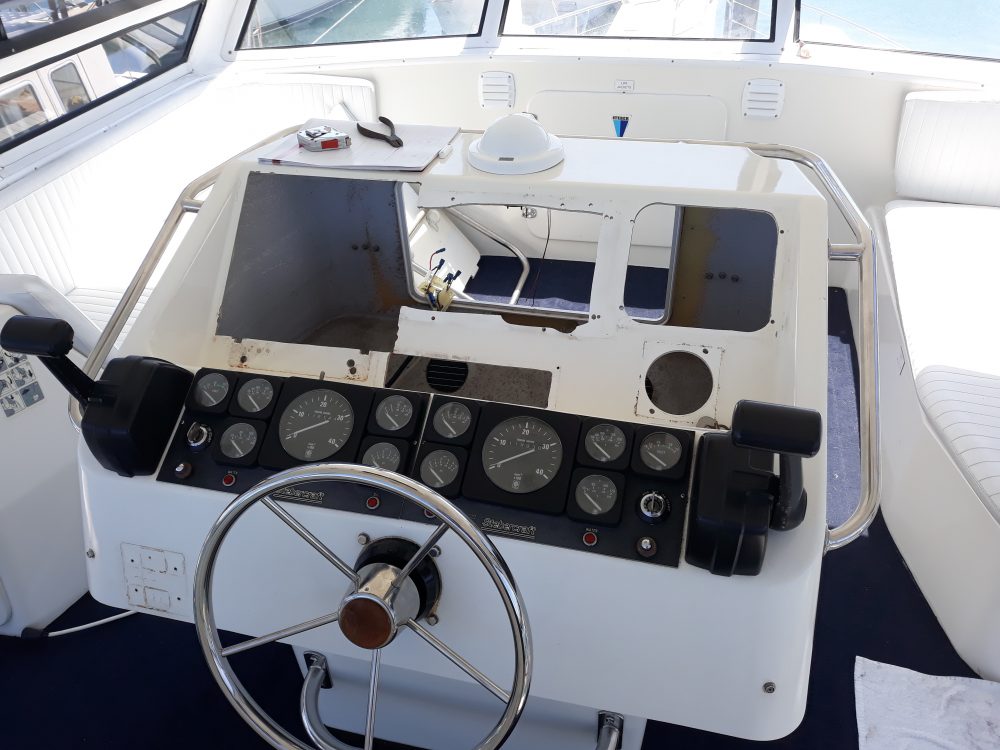 Stripped and ready to renew.

With the brand decision made, it now became a case of selecting the exact models for each component.  For the rescue boat, the NSS series of screens were installed as these use a combination of touch control and buttons (more suited to heavy weather use), along with the top of the range, dual channel Halo radar and forward looking sonar capability.  Multiple VHF radios were installed along with a high power AIS transponder.  As mentioned earlier, it is amazing how quickly marine electronics change and in the short period of time between these two upgrades, Simrad had released a VHF radio with inbuilt AIS transponder so that killed two birds with one stone.  While the plan was to again use the 16inch NSS screens, the available real estate in the dash of the Steber43 was about 20mm too narrow and would require extensive modification.  The higher-end NSO screens (slightly narrower due to being pure touch with a separate control pad) would fit but would be considerably more expensive but once again the world of change came to the rescue.

The generation 3 NSO had just been released, so like all good suppliers, there were end of Gen2 bundles available for an extremely attractive price making this option much more palatable.  On the radar front, there was a good saving to be had by dropping to the dual channel 4G unit (from the Halo) and this will more than satisfy the requirements.  The savings from the radar was used to upgrade to the top of the range sonar module which has the ability to connect up to three transducers and supports both high power and high resolution CHIRP.  The existing transducer turned out to be a high quality, 3kw 200khz commercial unit that was exceptional for shallow water (up to 150m depth) conditions.  With the new sonar hub, the plan is to install a multi-frequency, high power CHIRP transducer to supplement this next time the vessel is out of the water for anti-fouling.  A new auto-pilot computer and controller and Moonraker VHF antennas completed the system. 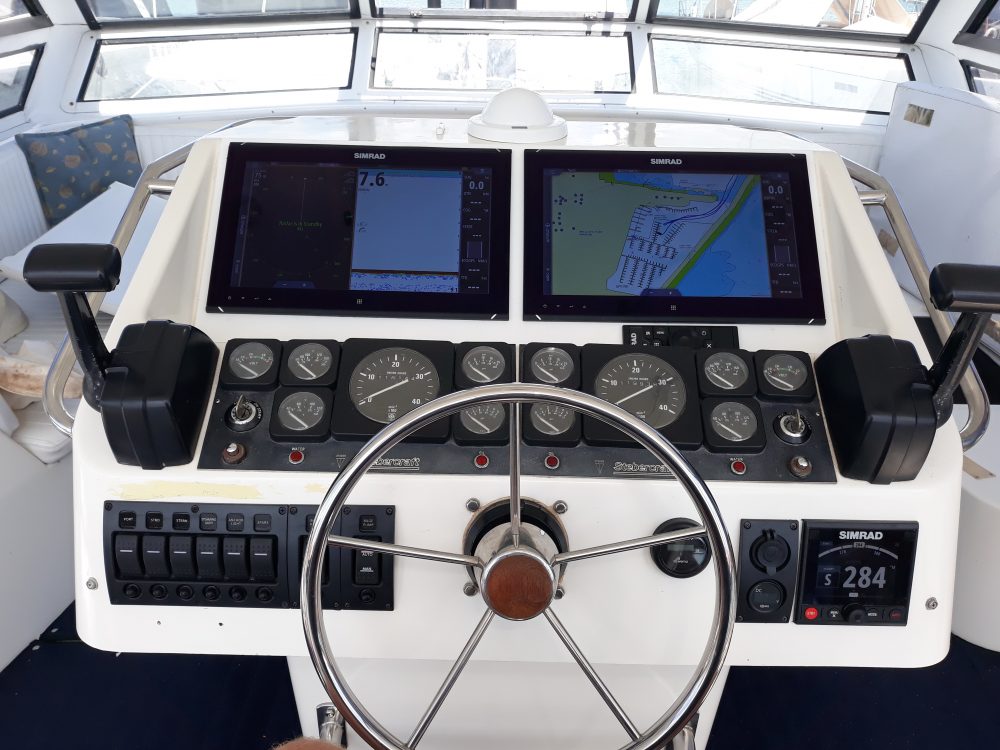 Before the new screens and ancillary components could be installed, the entire main and overhead consoles were stripped of all electrical wiring and switches.  A full rewire with new switches relocated to allow for the new screens was completed before anacrylic sheet was router-cut to hold the screens and cover the exiting mass of cut-outs in the dash.  This sheet was Sikaflex glued in place and left to dry before the test fitting took place.  One of the biggest problems with the new generation of marine electronics is that it is all controlled by black boxes.  Older units had everything plugged into the screens whereas now there is a “computer/controller” for every function.  Main computer, sonar hub, auto-pilot computer, radar unit, Wi Fi unit and finally the communications hub all have to be mounted somewhere.  Some of these are large, heavy and emit a fair amount of heat so careful consideration has to be given to where these are placed.  They also require separate power supplies to ensure they are correctly protected.  While the console on a Steber 43 appears large, it was quickly filled with all the units and cabling required to run a state of the art marine system.

So with the number one upgrade item completed and commissioned, the attention turned to the other items that required input.  Pumps!  Pumps on big boats take many forms and perform a myriad of functions.  Fresh water, grey water, black water, live bait and washdown to name a few.  Lost you at fresh, grey and black?  Fresh as the name implies is the pressurised water that supplies the taps, shower and hot water systems.  Grey is the runoff from the shower, while Black is from the head (toilet).  Fresh water drains directly overboard while grey and black go to holding tanks.  These tanks are fitted with pumps that allow you to empty the tanks when you are in a suitable area (Note there are strict laws as to the discharge of sewerage and as a boat owner it is your responsibility to know these laws and abide by them – no one wants to come face to face with a “Bondi mullet” when they are swimming).  On Motorvation, these pumps required attention.  The freshwater pump was replaced, relocated and replumbed while the grey water pump was replaced with a new “gulper” pump mounted external to the tank.  The black water tank pump was fine and left as is.  We did add one other pump to the vessel that is a little out of the ordinary. 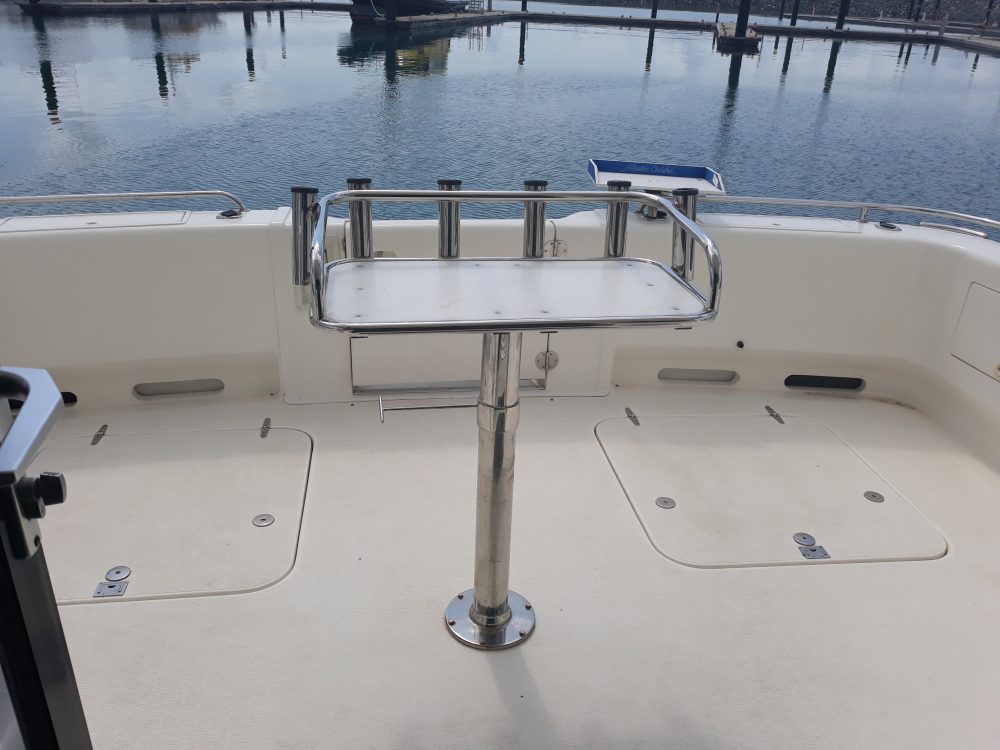 After the issues we had with the generator overheating and not being able to easily access the engine driven raw water pump, I decided to install an external pump to supply the generator seawater cooling.  The thought was that this pump could be mounted for easy access to allow for impellor replacement as required.  Now while the idea is fine, it is also fraught with danger.  With the engine driven pump, seawater is only circulated while the engine is running.  With an external pump, if it is operational when the engine is not running, it can flood the system exhaust and then flow back into the engine itself – not good.  To ensure the new pump could not do this, it was electrically controlled so it only ran when the engine was running and stopped whenever the generator was stopped and to date the installation has worked a treat.

This only left the most important pumps of all – the bilge pumps.  Motorvation is fitted with two 24V bilge pumps, one in the engine room  and one in the lazarette.  A thorough check of these resulted in some wiring repairs to remove corroded connections but otherwise the pumps and float switches were in good condition.  Being a commercial vessel she is also equipped with an engine driven pump and a manifold system.  This manifold allows the engine pump to be used as a deck wash/fire pump or it can be switched via valves to pump out either of the bilges.  Due to the quality of this installation from the Steber factory it is as good as the day it was installed.

Time at sea also requires a significant amount of refrigeration capacity.  With a galley fridge and freezer (both “bar” size) and a eutectic freezer on the deck, Motivation had enough cold storage for food but would struggle with the all-important drinks required on an extended trip in the tropics while not accounting for the keeping of fish caught during a voyage.   I used to skipper a Blackwatch 40 on charter and it had two eutectic units on the deck with one used to freeze fish and the other for drinks.  As the charter reached the last day or so, the drinks fridge was normally getting pretty light on and could be turned down and used as an overflow freezer for fillets if required.  This is all well and good on a charter boat where you can legally fillet fish (skin left on) when you are at sea on extended trips but with Motivation currently not in survey we had lost this ability.  Yes, you can still fillet if the fillets themselves are over 40cms, but the keeping of whole fish quickly takes up room and burns a lot of ice if you are depending on eskies to keep your catch. 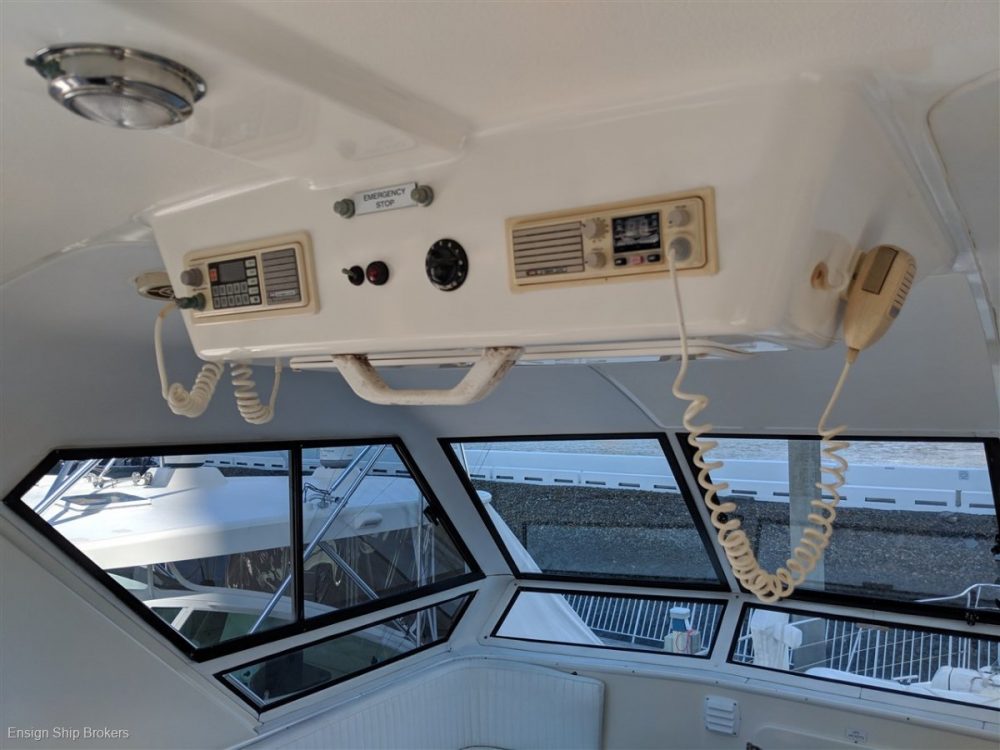 The addition of an Engel AC/DC fridge freezer solved the drinks issue as it could be refilled each night and would keep an “adequate” quantity of beverages cold for the next day.  Cold storage for fish is another issue and to start with will be via two large eskies filled with home-made blocks of ice of such size that they will last for several days.  We have some ideas around installing a freezer in the lazarette but will wait to see if it is required after a few shake-down trips.

Last, but certainly not least, was the servicing of the two Detroit Diesels and the Onan Generator.  This included oil changes, oil and fuel filter replacement, anode checks and replacement as required and a complete flush of the cooling systems and replacement with the correct glycol/distilled water mixture.  As I was not experienced with the Detroits, we did the gen set ourselves but had the Penske marine engine expert (thanks JJ) do the main engines so we could familiarise ourselves with the procedures and components.  Prior to the oil changes, oil samples were taken and sent for analysis and this will be redone every 100 hours to provide early warning of any issues that may develop.

At this stage Motivation was basically ready to head to sea but to complete the package Greg had commissioned some subcontract work.  While the Reelax game chair was perfect for heavy tackle game fishing, in reality this would only be a small percentage of the time and not required during most trips.  With this in mind, a custom made work station was manufactured and fits easily onto the game chair mount.  The same fabricator also made an eight-rod rocket launcher and when combined with rod racks we had installed in the lazarette, provide space to store 16 rods out of the way of the working deck.

Next article, let the fishing begin!