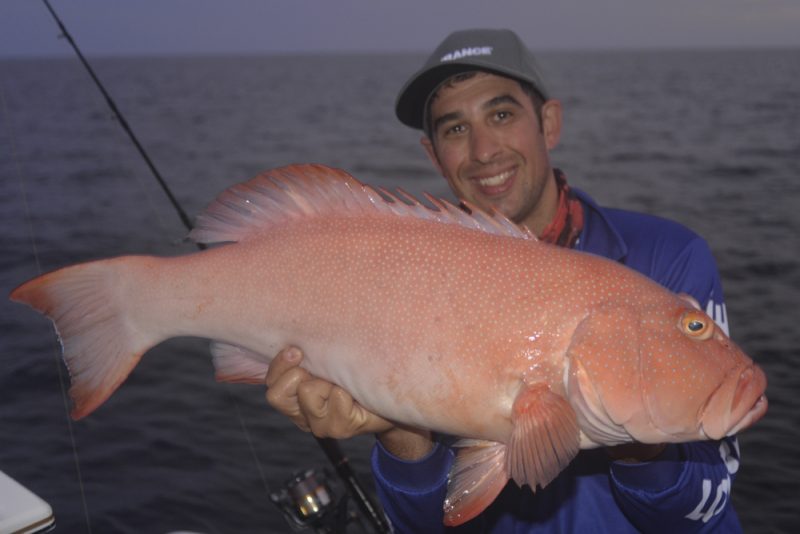 The thought of venturing out into the Coral Sea is certainly an exciting prospect for any red-blooded angler. Whilst we all know about the multitude of hard fighting sports-fish on offer out there, I think the main allure for me personally are the extensive myriad of reef systems to explore.

There is SO much ground to cover, perhaps too much to cover in one lifetime, and whilst no one reef system is the same, you can bet your bottom dollar that any day fishing the GBR is going to be an amazing experience.

I’ve fished offshore with my good mate Abba on many occasions now and it’s fair to say that each trip goes from strength to strength. Without a doubt, I’ve had my best days offshore fishing whilst aboard his boat Calypso. He has some excellent marks where you just know you are going to get a bunch of large nannygai, trout, red emperor etc but instead of flogging the spot for the sake of filling the ice box, he fishes them sustainably by bagging 8 or 10 red fish and then moving further afield. It can be hard to leave them biting, but doing this allows the spot to regenerate and also broadens your repertoire of new spots when you push yourself to explore new grounds. 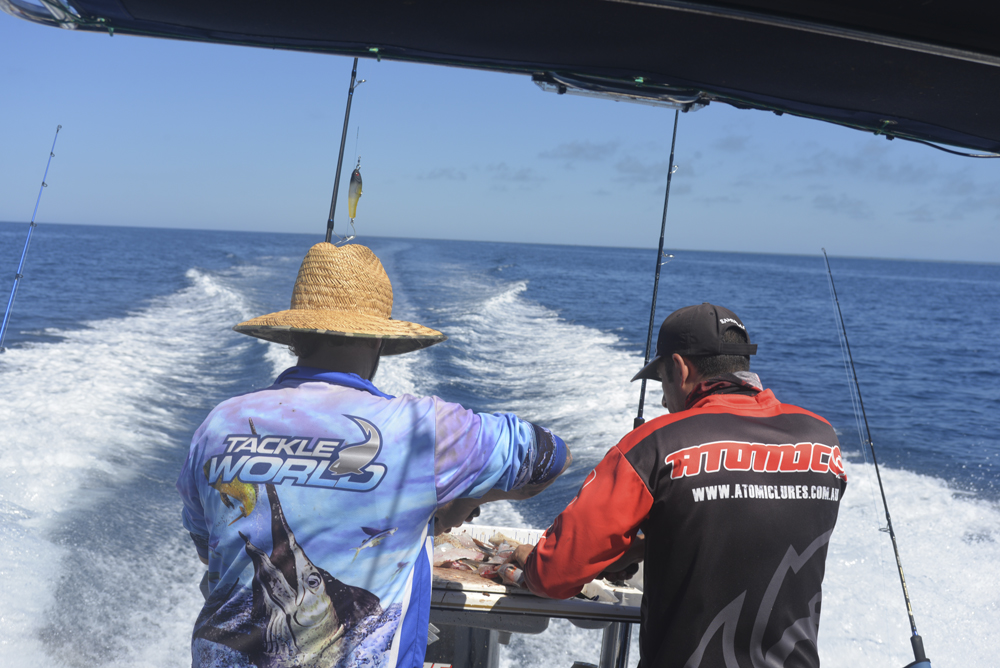 I should state that these new spots are not found by luck or by aimlessly driving around the ocean until you find something “fishy”, but instead, are informed by countless hours interrogating old maritime charts, sounder mapping and Navionics type phone apps. Planning is a massive part of a successful fishing trip, so identifying where depth contours rise sharply to form a pinnacle or drop off sharply into deep water is a great place to start.

On this particular trip, we left all that we knew behind and ventured into unchartered waters. Well, unchartered for us anyway. We drove an hour and a half north to Airlie Beach where we planned to fish a reef known as Blacks Reef. Blacks Reef is a massive reef system and is located a little further out than the most inner reefs, so we knew it would see slightly less pressure from the weekend warriors due to its location. We didn’t have any solid marks for this place though and I’d be lying if I said I wasn’t a little worried about that, but I guess that’s the way it is on a reconnaissance mission. The plan was to try for red throat in the shallow shoal country in close to the reef and then hit some locations in deeper water which Abba found with the aid of some mapping. 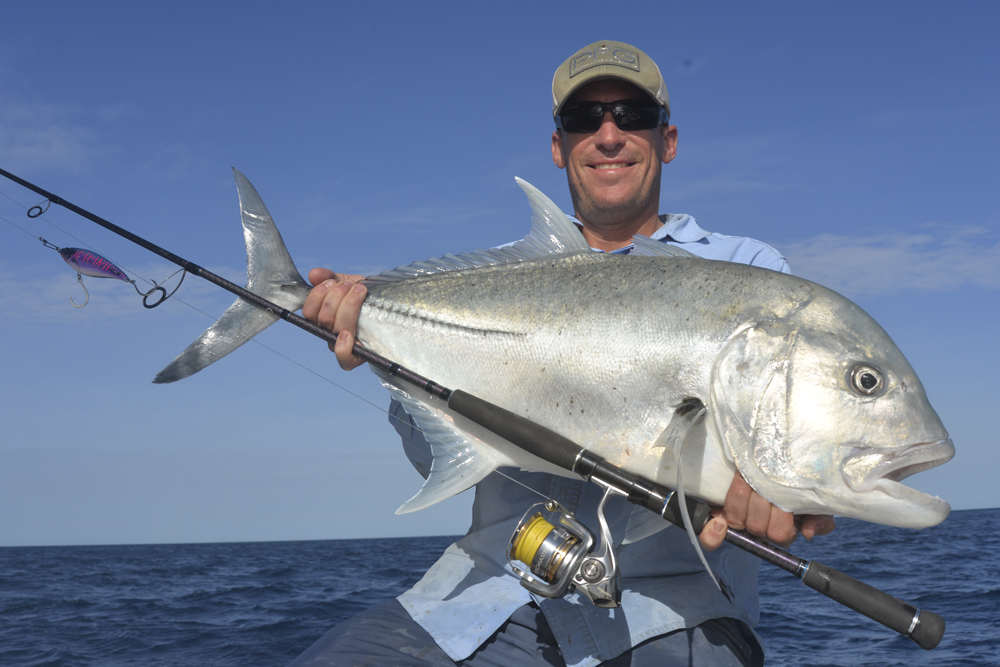 Cruising north-east out of the Port of Airlie and through Hook Passage on our way to the reef was amazing. Not only was it a much shorter distance to the reef than it is from Mackay, but the first 35km of the journey was like glass due to the fact we were inside the Whitsunday islands. I could certainly get use to that! We arrived at Blacks Reef and pulled up in 20-25m of water on the outskirts of the fringing reef. There was a decent show of scattered bommies, rubble and fish life on the Lowrance so we commenced our slow drift along the fringing edge of the reef. The goal was for red throat emperor and we certainly achieved that. Over the course of the next hour, we boated at least 20 good-sized specimens and a couple of trout, making for a very tasty start to the esky. Whilst in this shallow country and considering we had just caught a few trout, I thought it would be a good opportunity to drop down my 100g MajorCraft Jigpara jig to see if any other trout wanted to play the game. Being such an aggressive and territorial fish, coral trout are a real sucker for a well-presented jig. Personally, I have found the slow-pitch Jigpara jigs to have an absolute killer action. They flutter around tantalisingly with hardly any effort needed by the angler. Simply hop them slowly off the bottom with a slight raise of the rod tip and wind up the slack. You ideally want to do this until your jig is 3m or so off the bottom, then drop it down again and repeat the action. I ended up jigging up a beautiful little coronation trout. I had never caught this species of trout before so I was stoked, and particularly because it was caught on a jig as well. 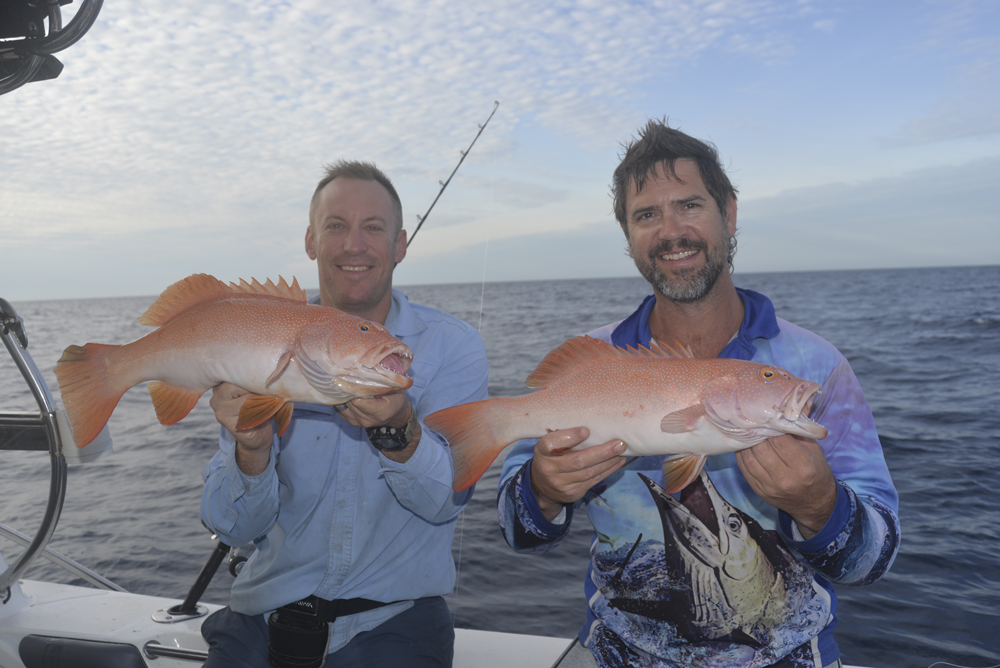 Now that the pressure was off, we decided to investigate the couple of spots Abba had earmarked for us to explore. These were a few miles away, but were situated in close to 50m of water. We dropped down our squid and cut flesh baits and were immediately hit with solid bites. It certainly looked promising. Abba’s mate “Disco” was the first to hook up to a good fish which fought like a daemon all the way to the surface – the usual sign of a decent red emperor. The crimson colour started to peak through about 15m from the top but the vertical grey/white bars amidst the crimson saw the moment ruined as the pattern of a large Chinaman fish came into view. 3 or 4 more of these hard fighting predators hit the deck before we affectionately dubbed this location “China Town” in the sounder and decided to move on.

The afternoon saw us moving around to a few of the earmarked locations where we caught a combination of trout, nannygai, red throat, spangled emperor and 1 lowly red emperor (some of which were taken on the Jigpara jig). 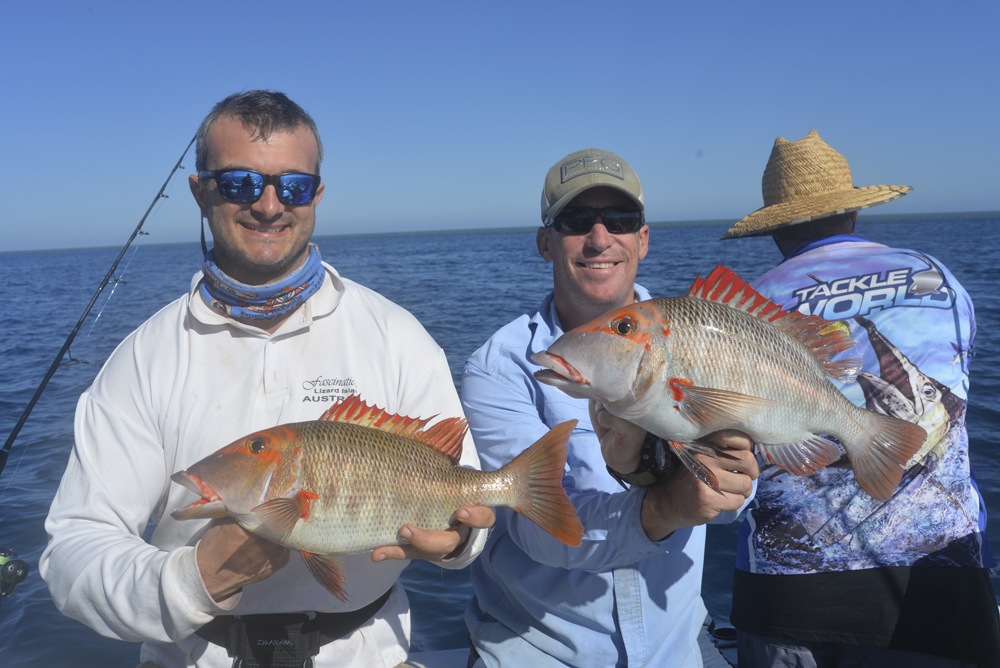 Given the fact Abba is a bait fisherman, I was quite surprised when he told me to bring a popping rod along for the trip. With the exception of a bit of jigging, bait fishing is our main method of fishing on these trips. Blacks Reef encloses a large lagoon, and the beauty of that is the fact there is an entrance to this lagoon where water flows in and out with reasonable force on the incoming and outgoing tides. This creates the perfect trio– bait, flow and structure, and this is the type of location you should cast your lures at as a priority. This combination of attributes congregates fish. It’s as simple as that. I had rigged up a 130mm Atomic Semi Hardz sub-surface stickbait and cast it into the turbulent water currents. Baitfish was showering everywhere which was a sure sign they were being harassed by something. It would have only been my second cast before a solid GT struck and wiped me out on the reef. Next cast and I was on again to a much more manageable sized fish. I had done all the hard work but unfortunately the hooks pulled when the fish was beneath the boat, Spewing! Abba ended up boating a smaller one which turned out to be a great catch on reasonably light gear.

It turned out to be a great trip in the end, despite the slow trip home due to the Bering Sea like conditions that were unexpectedly whipped up. It just goes to show that you don’t need solid offshore marks to catch a bunch of fish. All you need to do is conduct a little planning and think like a fish.