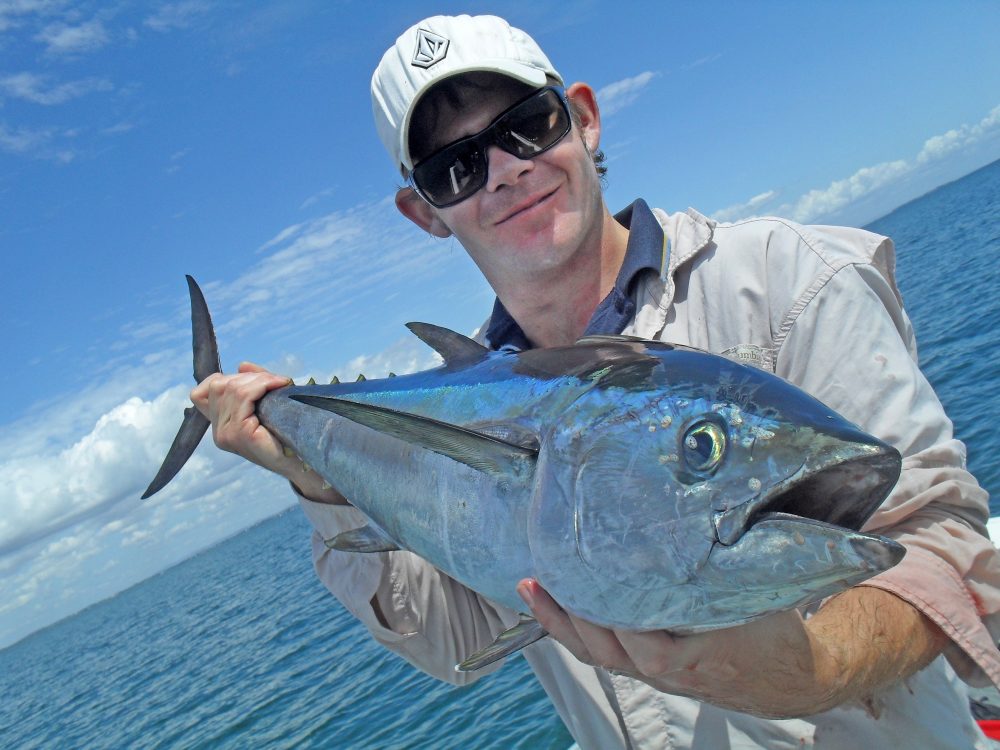 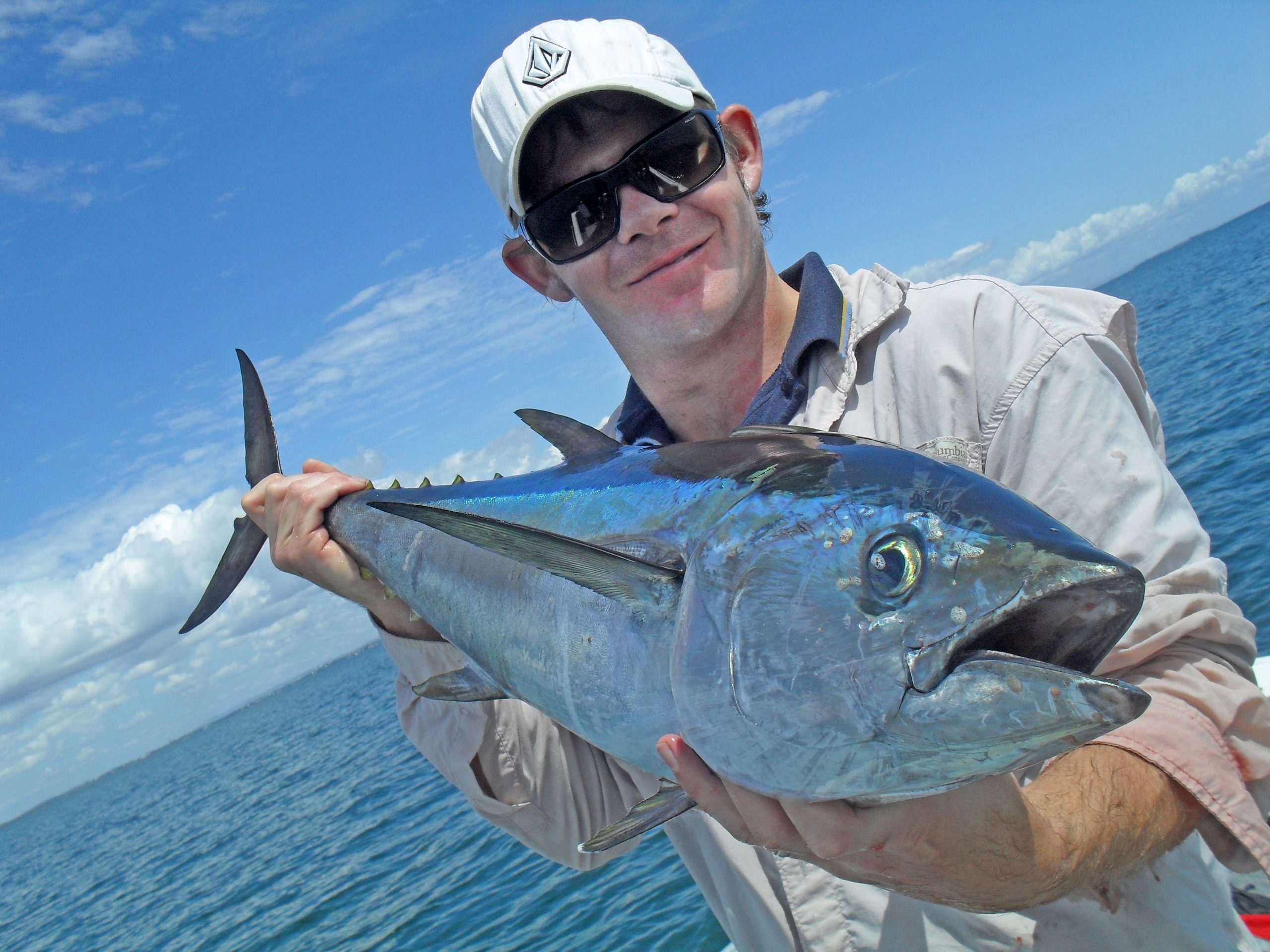 Summer has well and truly arrived in Brisbane, and right on cue, so have the pelagics.

Warm sunny days, clear water and schools of bait have provided them with the ideal conditions needed to venture into Moreton Bay. If these conditions continue, by the time this edition of Fish and Boat makes it to the shelves, they will be in full swing and hopefully have made their way into the southern bay, for the small boat brigade to enjoy.

Moreton Bay is a sports fisherman’s dream with school mackerel, spotted mackerel, mac tuna and longtail tuna regularly available from September through to May. It is possible to have all species test out your spin outfits in one session.

It is easy to put pen to paper and say that they are in a location, but pelagics being pelagics and Moreton Bay being such a large place, they can be hard to find. Moreton Bay pelagics seem to be particularly frustrating. If you do find them, approaching and tempting them can sometimes cause you to pull your hair out.

The great thing about the four species mentioned above is that they are available almost all of the way along the Queensland coastline. They can be regularly found in bays, river mouths, around islands and headlands, along surf beaches or anywhere currents exist along with an abundance of bait. Below are some tips that hopefully can lead to bringing home a delicious feed.

The easiest and most regularly available of the pelagic species in Moreton Bay, school mackerel or schoolies/doggies are a fun and reliable species for any angler to target. They can be caught all year round, but are best targeted from late September through to April.

There are a number of techniques that can be used to target these light tackle sport fish. As I enjoy the thrill of lure fishing, I target them by spinning metal lures around the many shipping beacons in Moreton Bay.

This technique is made easier with the help of an electric motor and a sounder. These tools allow you to locate bait around the beacon and keep you on top of the bait while moving silently around the beacon. This saves using anchors and allows you to work a beacon with bait thoroughly, and move from beacon to beacon to locate the bait and schoolies.

When spinning the beacons, I rarely drop a lure if the water is discoloured or no bait is showing on the sounder. If the water is not clear in mid-Moreton Bay I usually move closer to Moreton Island and fish the four beacons or beacons further north. Once bait is found on the sounder, I flick out a metal jig and free-spool the lure to the bottom. Once it has hit the bottom I click the bail arm over and wind as fast as I can back to the boat. Often a fish will hit the lure on the first couple of winds, but I have had them smash it right off the rod tip as the lure is just about to leave the water.

The gear I use for these species is a 3000 to 4000 size spinning reel matched with a medium to light rod around 7 feet long. You can buy specifically designed fast cranking reels that retrieve line faster, but a 3000 to 4000 size reel works and for most anglers is versatile and can be used for most species in Moreton Bay. I tend to fish on the lighter side and use 10 – 15lb line as I enjoy the fun of a big schoolie smashing my lure right in front of the boat and instantly peeling off drag. A trick I use when fishing for schoolies is to use a 1.5 metre length of 20lb main leader and a 15cm bite-off leader of 40lb. This makes casting easier for light rods with small guides and prevents knots catching in the guides and damaging inserts, or even worse snapping a rod tip.

There are many metal spinning lures or slugs available on the market. My two go-to lures are Halco Twisties or Raider lures. When the current is strong, a 50g jig may be needed. On the change of the tide, a 30g lure can be used. When spinning I usually use a single hook for a better hook-set, as school mackerel often throw treble hooks. It also allows a much easier and safe release of undersize fish (50cm) that can be in plague numbers at the start of the season.

Spotted mackerel or spotties are the tastiest and most sought after pelagic in Moreton Bay. They usually make there way down the coast, arriving offshore on the Sunshine Coast in late November. If a southerly wind is blowing and the conditions are right, they arrive in Moreton Bay not long after.

Spotted mackerel are different from schoolies as they roam throughout Moreton Bay, hunting baitfish. The age-old saying of ‘find the birds, find the fish’ is paramount when targeting spotties. If I find scattered numbers of birds heading in one direction it is more than likely they are headed to a school of mackerel or tuna.

Once a school of fish has been located rounding up baitfish on the surface, it is easy to tell whether they are mackerel or tuna. Mackerel slice through the water due to their skinny profile. Tuna, however, either create an explosion or porpoise through the water when chasing bait.

Spotties first appear in northern Moreton Bay in scattered schools, but as the season roles on they can appear in schools all the way through the bay to Coochiemudlo Island. Six years ago they appeared in massive schools all around Peel Island for a week and some mind-blowing fishing was had by many.

When a school of spotties has been found it is imperative not to drive straight up to them at full throttle. This usually spooks the school and they will quickly sound and appear again well away from your boat. Instead of rushing up to the school it pays to stay 100 metres away and watch the school to see what speed and in which direction they are heading. Positioning your boat to intercept their direction of travel is a much more productive approach. Leaving your motor in idle, staying at least 20 metres away from a school and casting to the leading fish in the school will have you hooked up in no time.

To target spotties you can use the same spinning lures, rods and reels that are used to catch school mackerel, although I usually opt for a 60lb bite-off leader for a little more assurance. Some of the time they will eat anything that you throw at them, however, when they are finicky and chasing a particular size or type of baitfish, a smaller or larger profile lure may be needed. I have also had great success using small 3 inch clear or glittery Atomic Sliders with an half ounce jighead with a 4/0 hook. This technique is a more natural approach and seems productive when they are a little shy of metal spinning lures. For some great fun they can also be caught on 10-15cm stickbaits and poppers.

Longtail tuna are the most sought-after pelagic for the serious sport fishermen who are looking for some mind blowing surface hits and blistering runs. Longtail tuna are delicious to eat, either as sashimi or as lightly cooked steaks on the BBQ.

In Moreton Bay, the longtails are the largest and sometimes most frustrating of all pelagics to catch. These speedsters can reach 25kg, but are commonly caught around the 8kg mark. Having more than 100 metres of line disappear off your spool on the first run and a 20+minute fight is all part of chasing longtails in the bay.

Longtail tuna can be caught most of the year in Moreton Bay, but the most productive time is from February through to May. During this time of year, large numbers can be found from the northern bay all the way through to the southern bay islands.

They regularly appear around the islands and sandbanks when an outgoing tide washes baitfish into the deeper water. The Rainbow Channel and Rouse Channel are surrounded by sandbanks and are great areas for all kinds of pelagics on an outgoing tide. On a trip in autumn a few years ago, I hooked a 15kg+ fish on 10lb line in the top end of the Rainbow Channel. After an hour of relentless runs and circles around my boat, my line nicked the side of the boat and broke. I didn’t know whether to be relieved or devastated.

To target longtails in Moreton Bay, I use a 4000 size spin reel spooled with 20lb braid, 30lb leader, matched with a medium size 7’ – 7’4” rod. They can be caught on lighter gear, but the longer the fight, the more the chance you will stumble across one of the many sharks, which will bring a quick end to the fight. There are many lures that can be used to catch these flighty fish. Sinking stickbaits such as Maria Bull Chop and Duel Adagio produce spectacular surface strikes when skipped across the surface or worked just under the surface. Spinning lures such as Maria Mucho are a favourite and cast a mile. Soft plastics such as Atomic 3.25 inch Paddle Tail or 5 inch Snapbacks in baitfish colours have worked for me when combined with a 3/8 ounce jig head with a 5/0 heavy gauge hook. Sometimes it is a matter of working through all the above lures until you crack the code.

Longtail tuna are caught all the way along the Queensland coastline. Laguna Bay off Noosa and Platypus Bay in between Hervey Bay and Fraser Island are hotspots for mass schools of longtails this time of the year. In winter and spring they make their way north, chasing the warm water and prolific baitfish.

These speedsters cop a bit of a bad wrap from people chasing more sought-after and tastier pelagics; however, they are a great sport fish that can pull some serious drag.

Like spotted mackerel and longtail tuna, mac tuna roam Moreton Bay, rounding up mass schools of baitfish on the surface. They can be as frustrating to approach and catch as spotted mackerel and longtail tuna, but are a great sportfish that can reach 8kg in the bay. From early summer there can be football field size schools of jellybean (1-2kg) mac tuna in the northern bay. These are great fun to catch on bream gear with small baitfish-style soft plastics on 1/6 – 1/6 jig heads.

Mac tuna usually feed on smaller bait fish, so I usually opt to use a small spinning lure around 30 grams or a 2-3 inch baitfish profile soft plastic. Larger mac tuna can be caught on medium size spin gear and provide some great fun.

Time to get out there

The northerly wind finally backed off for a day in early December and I recently went for a trip around northern Moreton Bay looking for spotted mackerel. Unfortunately none were found, but luckily plan B resulted in me having some fun with a few school mackerel and mac tuna on light gear. This type of fishing is available to almost all size boats when the conditions allow, so get out there and enjoy the warm weather and some line burning action.