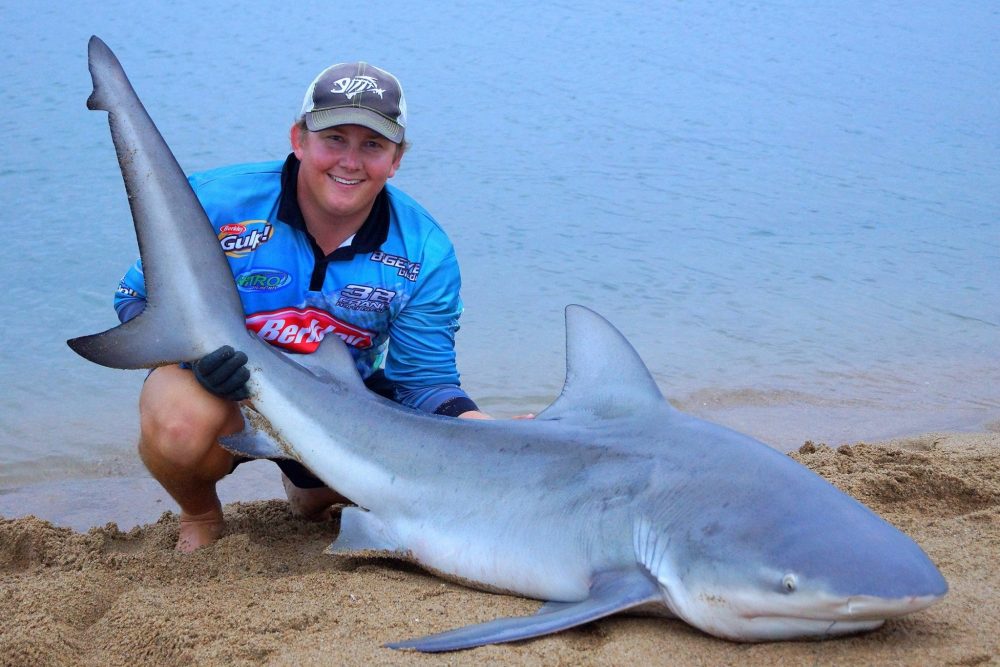 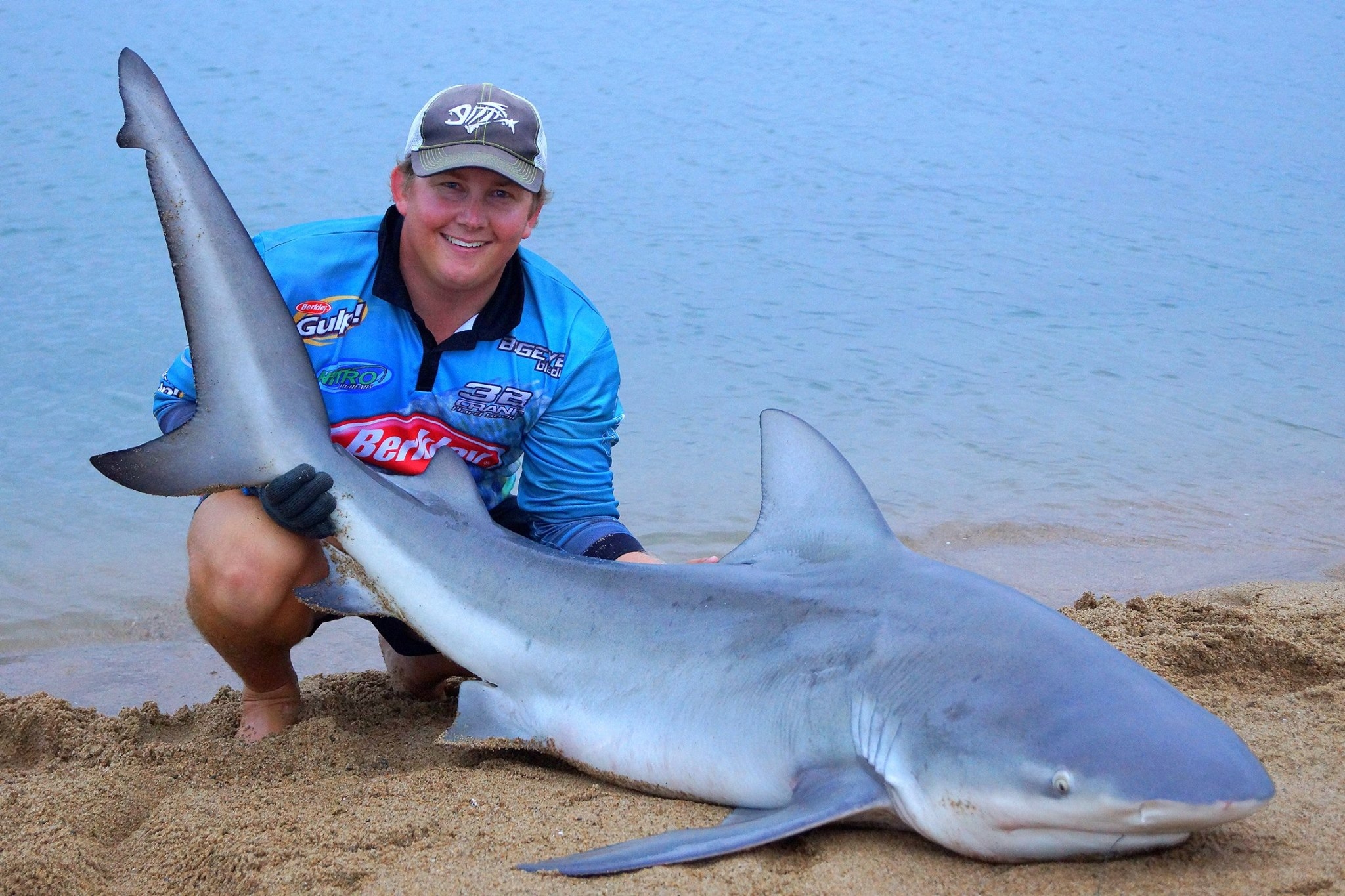 Over the past couple of years there has been a growing trend of targeting river bull sharks, as they provide great light tackle fun and can be targeted in any of the coastal rivers and estuaries in South East Queensland.

Bull sharks usually start to become active around mid to late September, once the water temperature starts to climb, and can be active all the way up to May depending on the weather and water temperature. The majority of the sharks found in our rivers are anywhere from 70cm to a metre long, with the exceptions of larger rivers such as the Brisbane River. These systems often hold a good number of sharks up to four metres long which can be found from the mouth right up into nearly drinkable fresh water.

When most people start targeting river bull sharks they believe they are chasing Jaws itself and use overheads with heavy braid and big baits and end up going home empty handed. This is not the case when chasing the smaller sharks up to a metre. A 2500 size reel loaded with 6lb braid, a rod length or so of 20lb leader to 60cm of 40lb multistrand wire trace with a size 5/0 circle hook is ideal. This setup allows the shark to take long runs, tiring itself out, making it easier to net and safer to handle. For larger sharks, around the one to two metres, I like to use a 4000 size reel paired up to a 6-8kg rod running 20-30lb braid with 80lb leader, and at the business end 100-150lb multi-strand wire trace approximately two metres long down to an 8/0 circle hook. I like to use T.M.M.F.A terminal tackle and rigs as they are produced locally and are made to a very high standard and are great for beginner sharkers. Using one circle hook and letting the shark take the bait before applying gentle pressure almost certainly secures a hook-up in the corner of the jaw. This makes it easier to remove the hook and ensures a safer release for the shark. As with most fishing, it is important to use just enough weight to hold the bottom and, if the current allows it, it’s often best to fish completely unweighted.

There is a wide variety of baits that can be used to target bull sharks, with baits carrying a high oil content ideal. Freshwater eel is, in my opinion, the best bait for bull sharks and can be found in freshwater lakes and creeks. Eel is a great bait due to its high oil content, and its tough skin makes it very resistant to pickers. It is effective on both the large and smaller sharks. Mullet fillets would be the second most favoured bait and are quite popular due to being readily available, but the downside of using mullet is it can be easily picked at by small bream and catfish, meaning baits have to be changed more regularly. Whilst dead baits are very effective, live baits work particularly well too. Small poddy mullet, whiting (legal), herring and catfish are all effective and can often trigger a bite. These can be easily attained using a cast net.

When chasing bull sharks, I like to have a few rods out using a variety of different baits suspended at different depths to try and maximise the chances of hooking one of these hard fighting speedsters. Use the lightest possible drag and let them pick up the bait and run. Then it is a matter of flicking over the bail arm (to freespool) and tightening the drag adequately before flicking the bail arm back over and letting the rod load up. This will allow the circle hook to turn in the corner of the jaw. Once hooked, let them run. They are very clean fighters and will often do one long run and then save another run for when you get them near the boat or pontoon.

A common question which is asked is the use of berley, I have found that berley is not needed and often brings in unwanted pickers that ruin your well-presented baits. When targeting larger sharks, the use of a rope around the tail is an effective way of landing them without using a gaff and helps ensure a healthy release. If you are able to, with the aid of a hook remover, release the shark next to the boat without removing it from the water, this will mean less stress for the shark and ensure it swims off healthy. It is important that all sharks released are treated with the same care and respect as any other fish, as they are an important part of the ecosystem.

Bull sharks are found in almost every river and estuary in Queensland and are targeted heavily from the Caboolture River through to the Gold Coast canals. They can be found anywhere throughout the river systems, but looking for bottlenecks in the river or concentrations of baitfish, like mullet, is a good starting point. Don’t be afraid to go right up river systems into drinkable fresh water. They love to feast on bass and freshwater mullet in these areas as long as there has been limited rainfall. Sometimes it is just a matter of trying different spots in different conditions. My preferred depth to target bull sharks is anywhere from two to four metres of water in the main river channel, as this is likely where the sharks will be hunting.

I find time of day is not critical when targeting bull sharks – you’ll pick them up at any time – but low traffic times on the water from dusk into night are the best. Bigger and more sharks are caught during these hours.

It is important not to be disheartened if you have not had a run after an hour or so, as they often move through in schools and you can have hours of nothing turn into an hour of mayhem. It is a matter of being patient and the results will come.

Safety is an important aspect when chasing bull sharks as even the little ones carry a full mouth of razor sharp teeth and can be extremely aggressive. There are a few precautions which must be taken to safely handle these sharks. The first is to use light tackle. Light tackle allows the sharks to adequately tire out and be much safer and easier to handle once landed. It is important to use a pair of long nose pliers (or a long hook remover) to remove all hooks, as they do have the ability to quickly throw their head and can grab a hold of your hand if you are not paying attention. Bull sharks are extremely powerful due to their high muscle mass and the best way to hold them is to grab them from on top behind their gills with the back hand controlling their tail. With their power and aggression in mind, these are not a species that should be handled by children.

Apart from your own safety when handling sharks, it is important to think about the safety of others and not fish in areas where people are swimming or around boat ramps.

So with the warmer weather definitely here, it is a great time to start targeting the abundance of river bull sharks. Whether you have a boat or are land based now is the time to get onto some light tackle river fun. 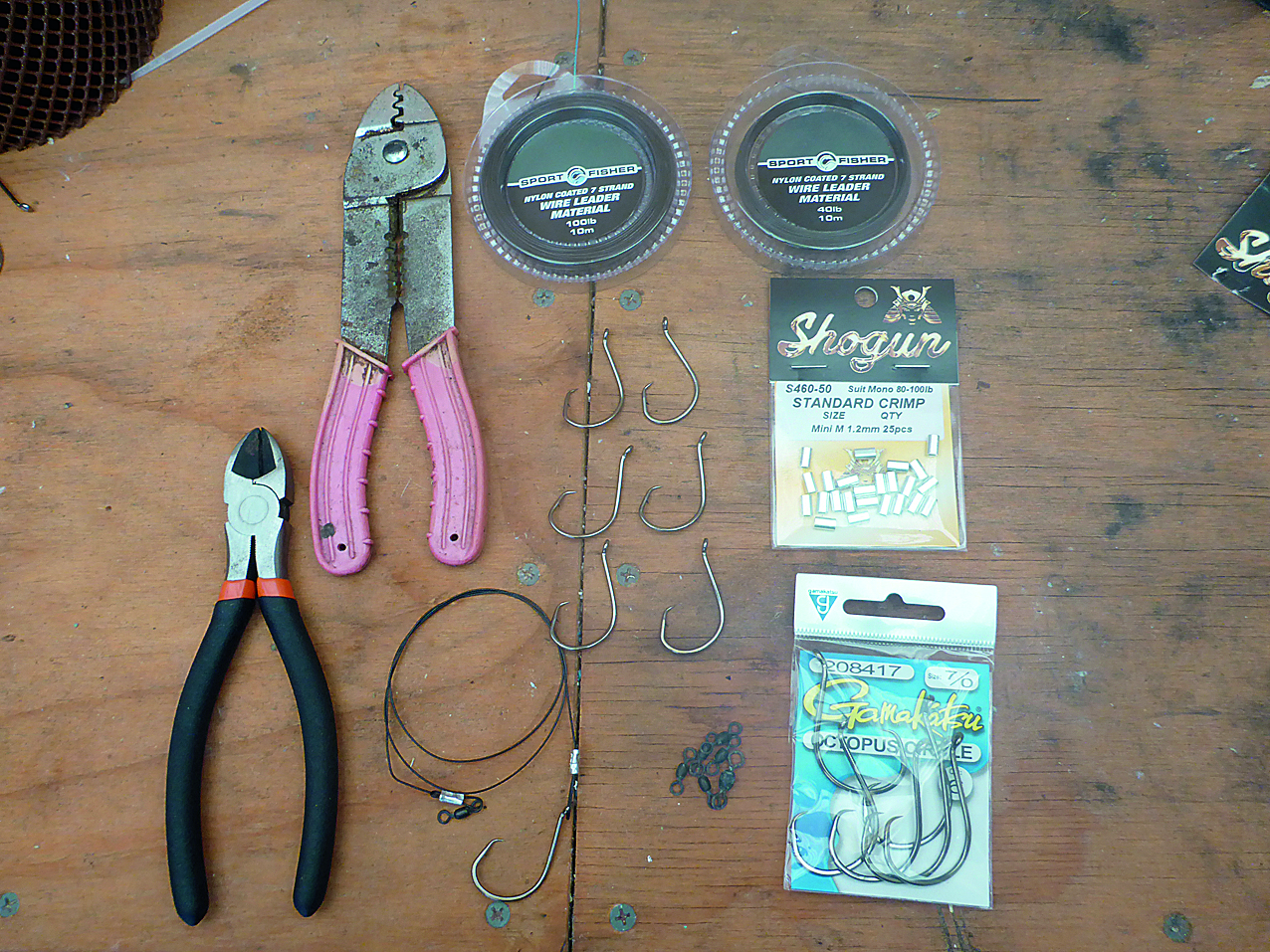 Only a few simple tools and a handful of quality tackle is all that is needed to make up your own traces.