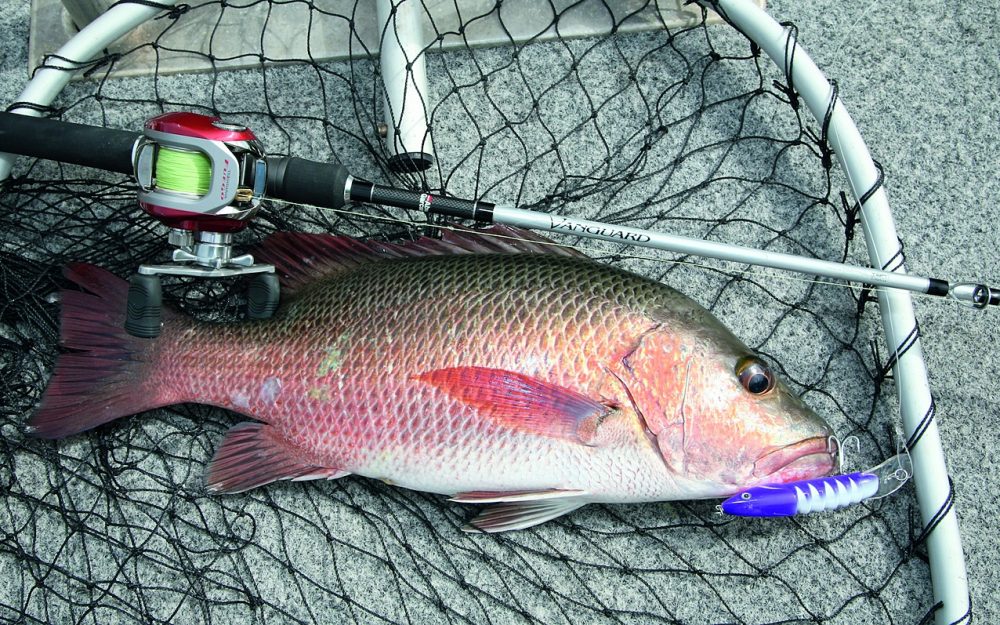 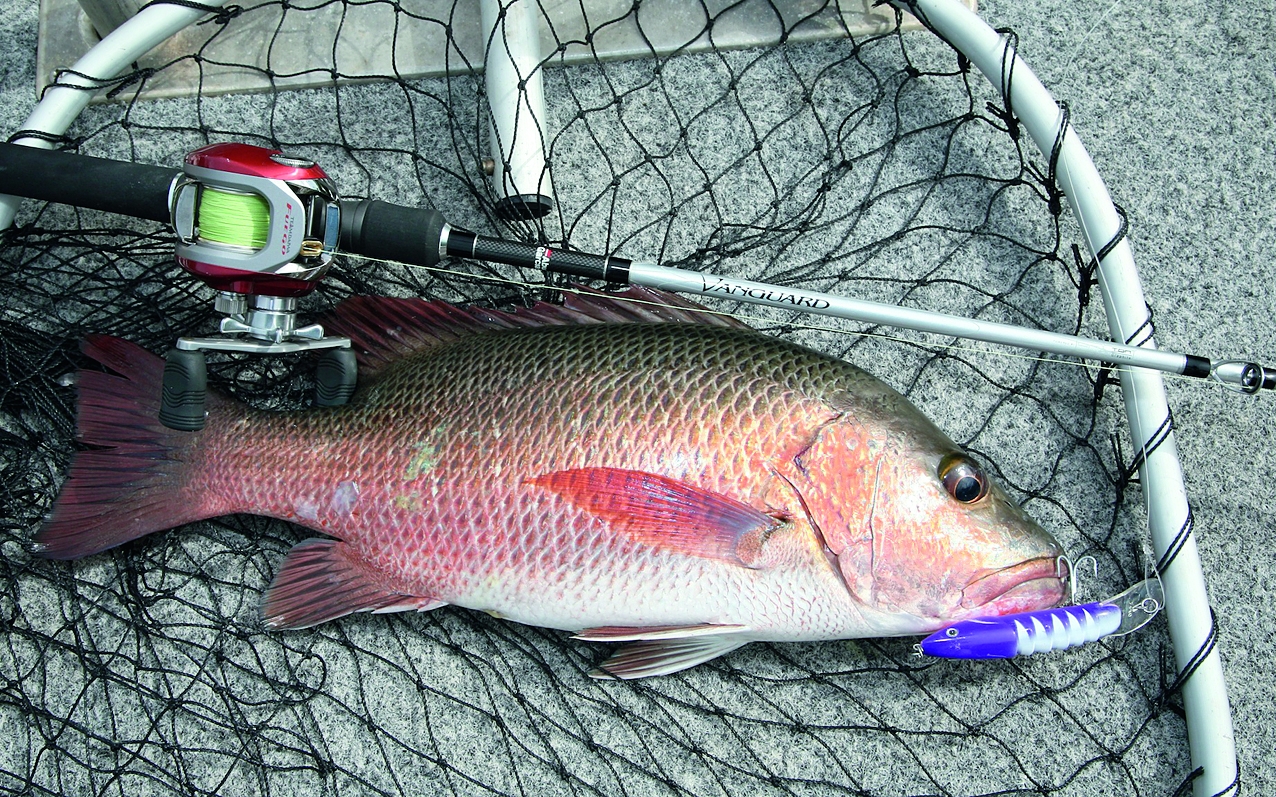 There’s nothing like a good ol’ New Year to foster all sorts of visions and plans for things piscatorial in the coming season. For some, the holidays that accompany this celebration provide plenty of opportunities to wet the proverbial line while others are thinking of that ‘trip of a lifetime’ that may just happen before 2016 rolls around.

No matter what’s happening, the fishers mind is invariably led to the state of their tackle and what goodies they might need to make 2015 one to remember. Old Barradave has been working his way through some of the latest offerings and has come away very pleased indeed.

As the mumma gnu said to the father gnu, “Have I got gnus for you!”

I just love the livery of this reel! The all black colouration might not appeal to some but certainly gives the impression that this piece of machinery is ready to leap out there and do some hard work – no worries at all when you live in a fish rich paradise like Weipa!

A couple of winds of the handle is enough to get the feeling that this is a solid but super smooth offering from Penn that is marketed towards the upper echelon of the sport fishing fraternity. The Conflict sports a full metal body and that allows maintenance of the precision gear alignment even under the most severe fishing pressure. With 12 kilos of drag available from the legendary HT100 carbon fibre washers, this is one reel that is ready for some serious piscatorial adversaries.

Smoothness is enhanced by the balanced aluminium bail rotor and the vented spool is one of the first to be designed to take braided superlines without the need to use nylon backing. The spool features a rubber gasket that allows braid to be tied directly to its base so that the mass of line won’t slip when major drag pressure is applied. Line capacity rings top off Penn’s innovative design by assisting fishers to determine at a glance how much line they’ve lost on a hot runner.

I filled the Conflict with some Spider Wire Stealth Code Red 30 pound (15 kilo) braid and fitted around 250 meters to the Conflict spool. The reel was then mounted on a Penn Regiment 2.13 meter (7 foot) 8 to 12 kilo spinning rod.

This beauty has just what I like in an offshore rod – it’s light in weight, yet has heaps of power when you need it and casts a range of lure weights like a bullet. The Regiment is 100% graphite and features the latest Fuji K tapered one-piece guides with Alconite inserts that resist the line becoming wrapped around the guide frame when wind knots happen. A stylish graphite reel seat allows the reel to be seated securely, something that is very important when high speed species like tuna come along.

The shaped Hybra-Cork rod grips have been constructed from rubber and cork that is then bonded to a lightweight core material and I was very impressed at how ‘sticky’ they were even after grabbing them with hands that had not been wiped after handling a nice queenfish. I would have liked a slightly larger fore-grip but must admit that I didn’t really notice the difference when the fish came along.

The Conflict and Regiment balanced perfectly and ended up doing most of the usual tasks I require a Weipa offshore outfit to do very well indeed. Whether casting 60 gram slugs at half a dozen longtails working a bait ball or working a 45gram jighead and soft plastic off the bottom in 20 metres, the combination felt perfectly suited to the task.

As is often the way when you’re looking for a good picture, two tuna fell off on the way in then I made the mistake of trying to lift a solid grey mackerel over the side without a net – and it met the same fate. Luckily, a feisty queenfish came along to really give the outfit a good going over, jumping all over the place before I finally managed to grab its tail.

With both rod and reel being very well priced, this looks like a top outfit for those fishers who like a premium combination without a premium price tag. Just remember, graphite rods need an extra bit of TLC and don’t like being bent at an angle of more than 90 degrees (high sticking).

The Vanguard series of rod from ABU Garcia are made from 3M’s Powerlux composites, a new technology that allows high concentrations of nano sized particles to be imbedded in the individual filaments of the 40 ton carbon fibre used to construct the rod blanks. This produces a rod that is incredibly strong and durable while being lighter in weight and more sensitive. 3M claims that the graphite blanks are 65% stronger and 20% lighter than conventional material while providing a much higher level of overall performance.

As my stock baitcasting rod is usually targeting species such as barra, jacks and threadies, the 1.83 metre (6 foot) model rated for 7 to 9 kg line was the model of choice. The Vanguard VSC600 1MH featured Fuji K guides, an exposed reel seat and 23cm butt with small fore-grip, a quality product with top line hardware.

The Vanguard was fitted with a Daiwa low profile baitcast reel that was filled with the new remastered Platypus Platinum Plus braid in 20 pound strain. Rigged with a metre of 40 pound Platypus Hard Line leader and a Cutting Edge 90mm Rock Prawn lure, the outfit was superbly easy to cast in spite of its lightweight appearance. Once in the mangroves, the casts were landing right in the spot almost immediately.

I was looking for a big jack but had to be happy with a couple of small models plus a couple of barra before the rod got its first decent work out. The culprit proved to be a golden trevally about 1.5 kilos in weight – an uncommon capture way up the creek we were fishing. It was not on its lonesome as another came along about half an hour later followed by a couple of nice fingermark.

Further sessions with the outfit were similarly productive confirming its excellent performance. And I ended up getting a horse of a jack, a 52cm red devil that came off a snag in a Hey side creek. The rod handled the struggle effortlessly.

However, the acid test came when I was trolling some bauxite shoals just offshore in search of a mackerel or two for the larder. As there were grey mackerel smashing some schooling bait, I decided to put my ‘barra’ outfit alongside the Conflict/Regiment combo, as greys often prefer a smaller lure. Wrong choice, particularly when you’re fishing alone!

The Vanguard went off so I grabbed it only to feel a fairly ‘immovable’ force on the end that started to strip the Platypus braid as soon as I applied pressure. Somehow in the next half hour of chasing line and winding in the other outfit between runs, I managed to wrestle a two metre hammerhead shark up to the side of the boat. The lure was lodged in the left eye stalk and, by some miracle, I was able to get the hammery to lie still long enough to get the pliers on the treble and set it free.

Now, the upshot of that fight was twofold. Firstly, the Vanguard, although somewhat out of its league with a fish that size, resisted my efforts to bring about its possible demise – so full marks must go to the Powerlux composite. Then there was the Platypus Platinum Plus! If you wanted to give a new line the ‘ultimate’ work out, it would be hard to find a better scenario.

Top marks to both products in a fashion that Weipa seems to be able to dish out quite regularly!