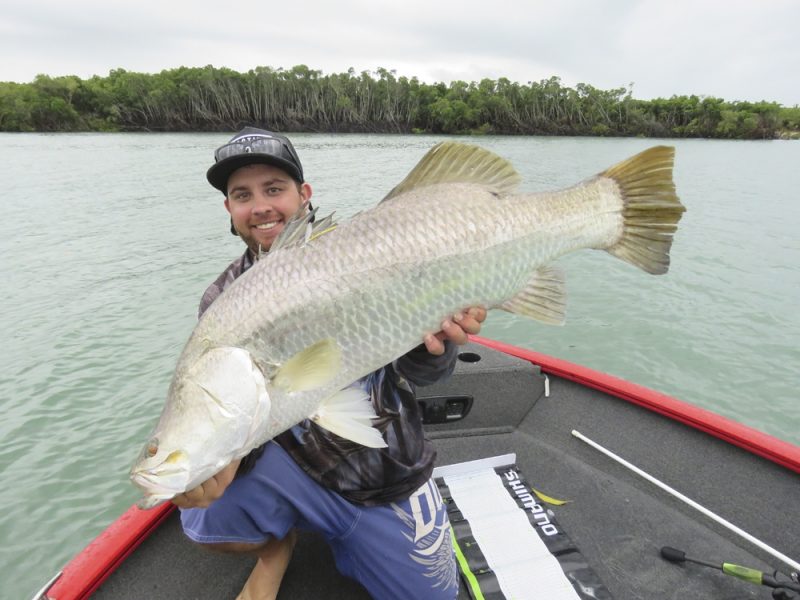 There’s little to no doubt that the Net Free Zones (NFZ) up and down the Queensland coast are working in the recreational angler’s favour, with places like Rockhampton being put on the map as one of the premier fishing destinations in Australia. Being Local Mackay lads, and with Rockhampton having its fair share of publicity lately, we thought we would let the angling community know just how good the Mackay NFZs are.

Some of the fish captures that have been recently caught in this area are quite astonishing. The Seaforth NFZ is quite a large area made up of several systems and boat ramps, but at most times can be very tidal dependent. This being said, plenty of research and time on the water in these locations is resulting in many Mackay anglers finding great schools of barramundi to contend with.

The barramundi numbers that frequent this area is amazing with schools of 20 fish in the mid to highs ’80s being found regularly. It seemed for a long time that finding them was proving to be the easy part and converting these finds to a hook up was the testing part. There’s no doubt that some of these schools are common to most anglers that fish this area, and by now are starting to feel pressured, but that’s the whole point of this article, to share a few of our tips on how we have converted a few of these finds to great captures. Even the most pressured fish can be tempted into feeding, and there is no better feeling than tricking a trophy barramundi into eating an artificial bait. 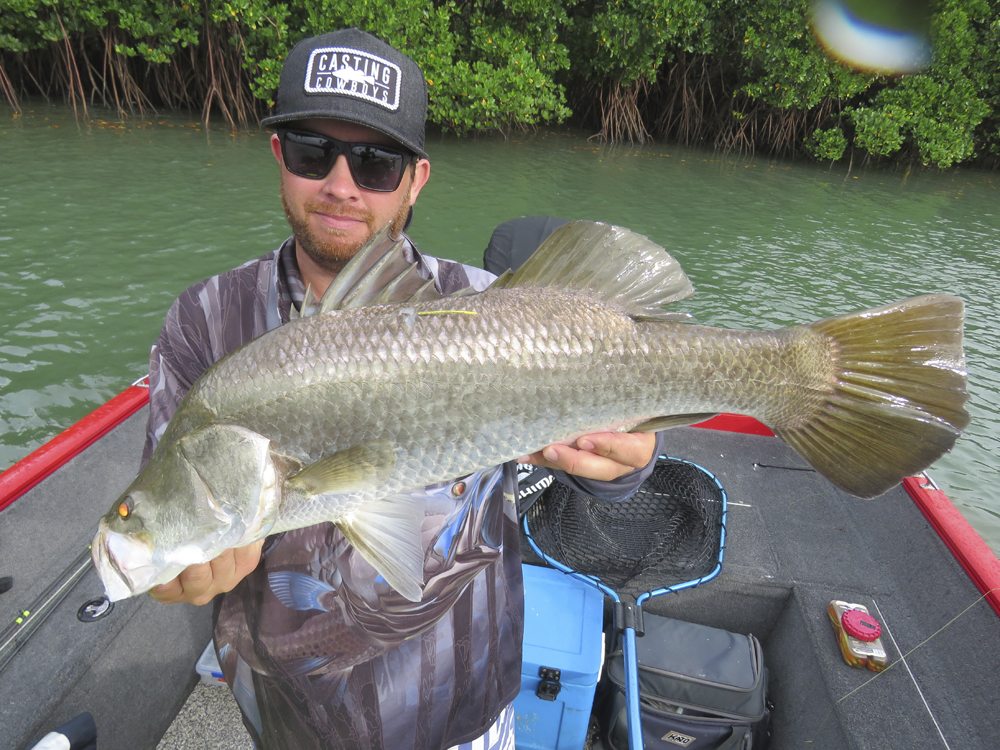 Now, when I say “Finding these fish easily”, I don’t mean that we have just launched the boat and stumbled upon a school of barramundi like a pot of gold, but paying attention to tide and weather patterns over the past 18 months has helped us learn so much about the barramundi’s habits and to help predict possible feeding locations and times. Before we get into the details and all the great stories about bringing these chromed beauties onto the deck I thought I would discuss the benefits of utilising tools such as a fishing diary. Now, before you get thinking that it’s a diary filled with stories of captures and good times, I’m actually referring to a spreadsheet we had created to track our data from past fishing trips. Over 18 months of fishing and pumping as much data as possible into this spreadsheet, we can already see patterns forming which are what we use as our key indicators when planning our next fishing mission. With so many hours being spent on the water and so many fish being captured at random times we needed a way to store this information as clearly my memory isn’t what it used to be.

The little bit of extra time it takes to record this data after each catch (maximum 2 minutes) has saved us hours of searching for fish as we now have a table that can help us predict their locations. Like any fishermen would tell you, they aren’t 100% predictable, but any time saved searching is also money saved in fuel, maintenance costs and less time searching equals more time fishing. The spreadsheet is quite simple and is set up with a series of rows for the data. I’ve included an example below, but feel free to modify/improve it to suit your needs! 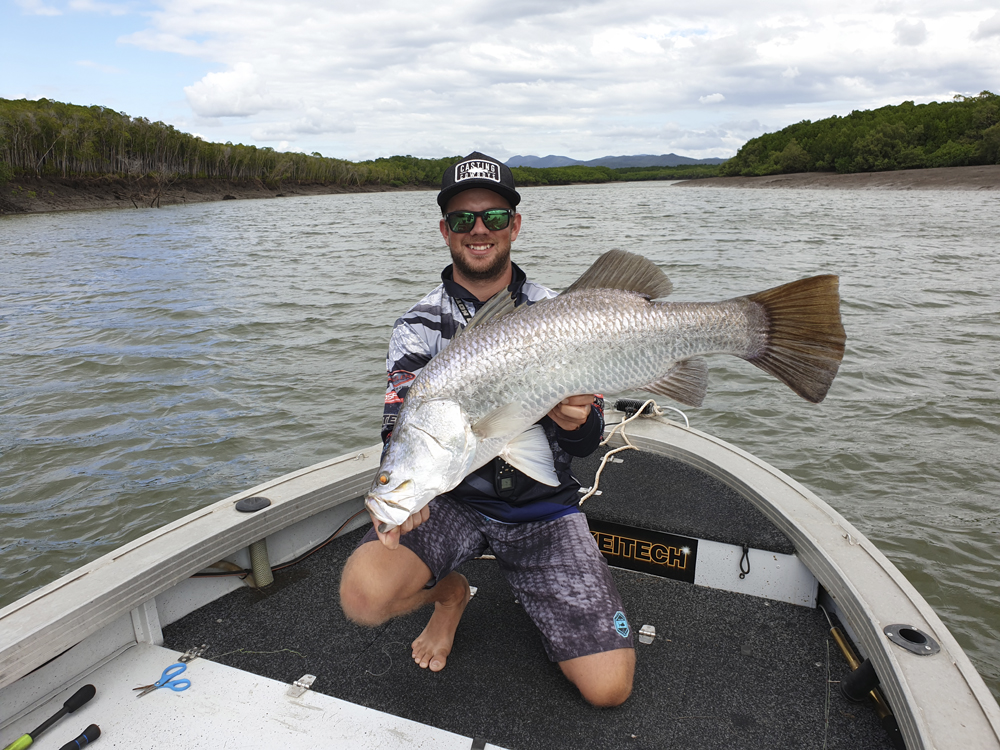 All these above headings are just some data we like to collect, and all aren’t critical, but we believe the more information we have around our bite periods, the more we can analyse. It is quite clear now on fishing trips where we have stumbled on a hot bite period that there is common denominators or key indicators that are the same as other hot bite periods. Being avid, tag and release fishermen we have always got a notebook on hand in the boat for recording data and utilise this booklet to record the information required. Once we are home, it takes no more than one beer to transfer this information into the spreadsheet, and before we know it, the data is collated. This sheet now is one of the first tools we look at before planning any trip. After searching the tides for times we want to fish, we cross-reference against our diary which then gives us a starting point for our next trip. Some people may look at this as quite a bit of time and effort but let us assure you that this has played a huge part in our catch rates being consistent, with most trips now producing good fish and we can only imagine after a few years of data capture what information we will have available at our fingertips, fishing isn’t just a skill these days, it’s a science!

Now that we have filled you in on one of the tools that we regularly use to help with our fishing, it’s time to get down to the nuts and bolts of it all and unlock some of the tips and tools we have found work for us on cracking the code with pressured fish. To some anglers, most of these details won’t come as anything new, but sometimes just being reminded of the minor details can make all the difference. It’s no secret we all get locked in a one-track mind at times and forget that the basics can sometimes be the best asset to a fisherman chasing that trophy fish capture. 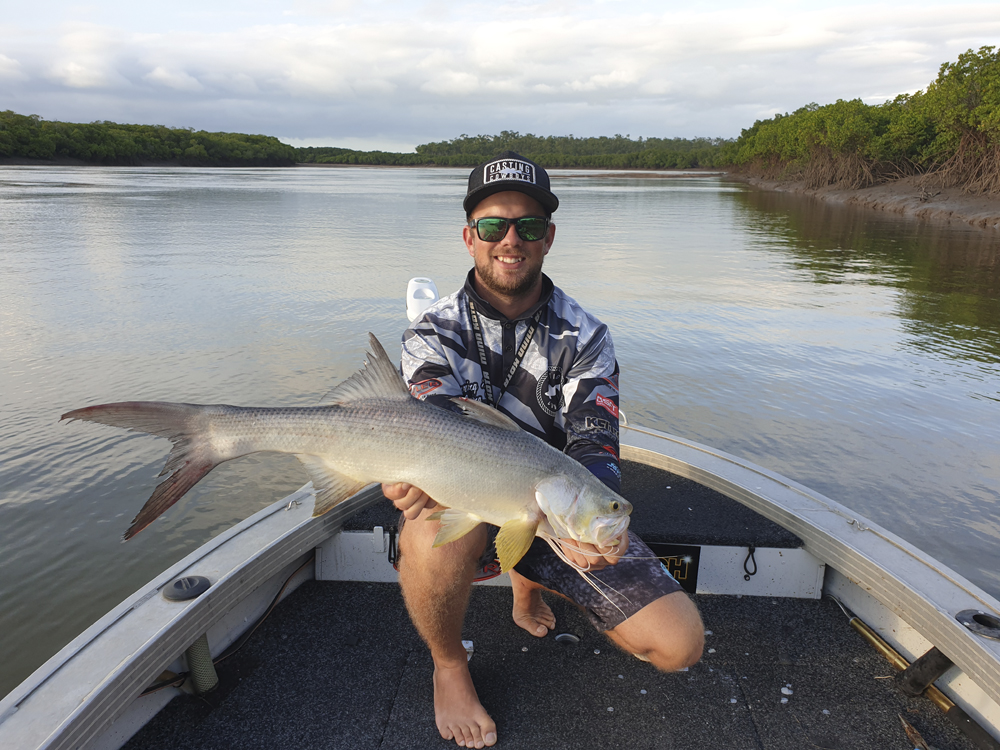 Recently we had everything align for us with a great weather window opening up for a short period, the tides looked perfect and best of all, to the pleasure of the boss, it lined up with our days off. Now I don’t know if I’m the only fisherman that gets this, but when we have planned a trip, and everything is going well, I often get nervous thinking that it’s all too good to be true and surely the fish or something will disappear. But, not this time with two days of fishing in the NFZ producing some great numbers of barramundi, mangrove jacks and threadfin salmon as bycatch. There’s nothing like telling a friend about a fishing spot you have found, then taking them on a trip to find hooks getting set in the first half an hour of being in the location, it almost looks like you know what you are doing.

In Mackay, the systems and ramps are affected quite heavily by tides, and finding a day or two where the low tide is at midday is paramount as this means you can access the ramp at first light with plenty of water, and also head out in the afternoon with no worries at all, as on low tide, most of our creeks are cut from the mouth or ramp, and being stuck for a few hours is part and parcel of fishing in Mackay. We tend to find a section of bank we can escape from the boat on the dead low and sit under the shade of a tree with a cold stubby and lunch. Our trips aren’t all about the fishing, but more about making the most of the days of and enjoying the trip.

On our recent outing, there was something special in the wind as we rolled up to “Spot X” as the sun was showing its head. A couple minutes of scanning the bank with the Lowrance had us blown away as there was quite a large school of big barramundi working the bank we had hoped to fish. Knowing these fish were in the middle of a high boat traffic area and pressured, I knew that we would have to approach them smartly to make the most of this opportunity. This meant passing the bank and returning under the stealth of the electric motor. Electric motors these days are a great tool, but we believe that the fish have also smartened up to the sounds from these motors. We like to try to keep the prop speed as low as possible to minimise any disturbance it may cause underwater and awake the fish to our presence. By doing this, we have the upper hand to make the most of every chance we have to get one of these fish on the deck. 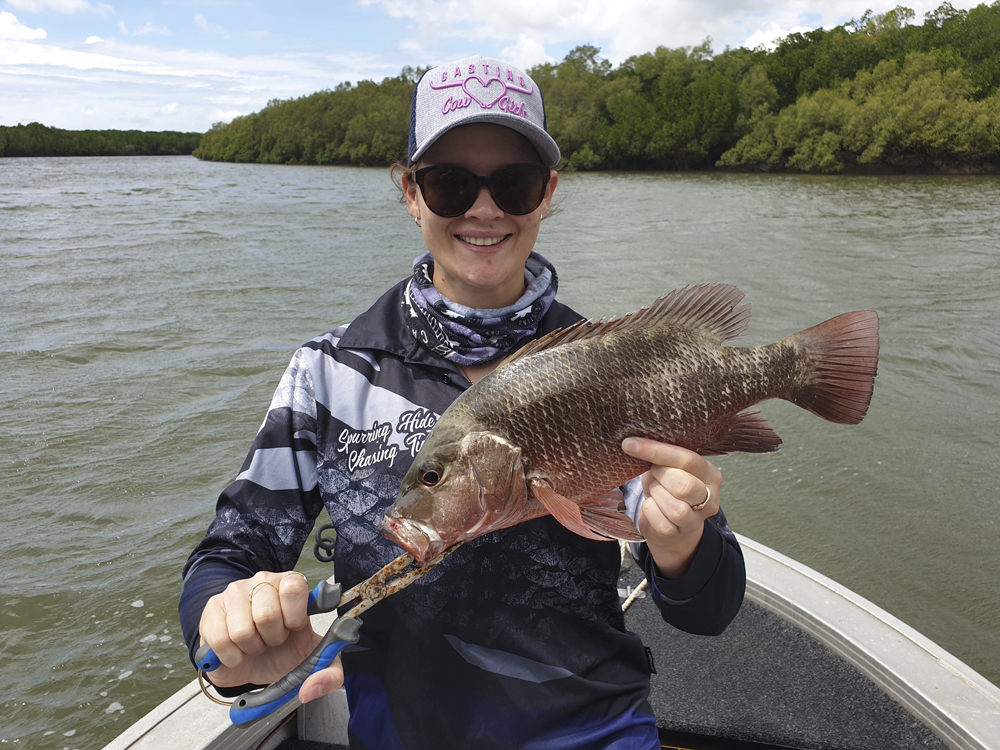 Having fished this school and location previously on the tides a month before, we knew that for some reason they had lockjaw, which is quite hard to believe when all the indicators such as water temperatures and barometric pressure were perfect. But if they were that simple to understand we wouldn’t be the dedicated fishermen we are. We knew we had to start with small baits and downsize our leader in the hope of fooling them into bite. We are hooked on the 3” Gulp Shrimp as our small lure option with minimal action, they are dynamite on all fish including metre plus barramundi, and we put this down to the added scent. We run the shrimp on a weedless 4/0 and a small 1/8 ball sinker and this tied to our mainline with 20lb leader. Running light gear has resulted in a few fish released before capture, but it surely has improved our bite rate. One thing we have paid quite a bit of attention to is changing out our gulps regularly to keep the scent active, it’s been quite noticeable if the same gulp is used for hours that the bites just aren’t the same as if it is a fresh bait straight out of the packet.

The NFZ around Seaforth produced just over 20 Barramundi for 3 anglers in two days, whilst that is no huge feat, it demonstrates a vast improvement of this area compared to years gone by. Most of the fish captured were in the ’90s, which to any angler, is a great size barramundi and can put on a hell of a show on light gear. If the trend of increased numbers and size of fish being caught continues the future of fishing in the Mackay region is a very bright one indeed!