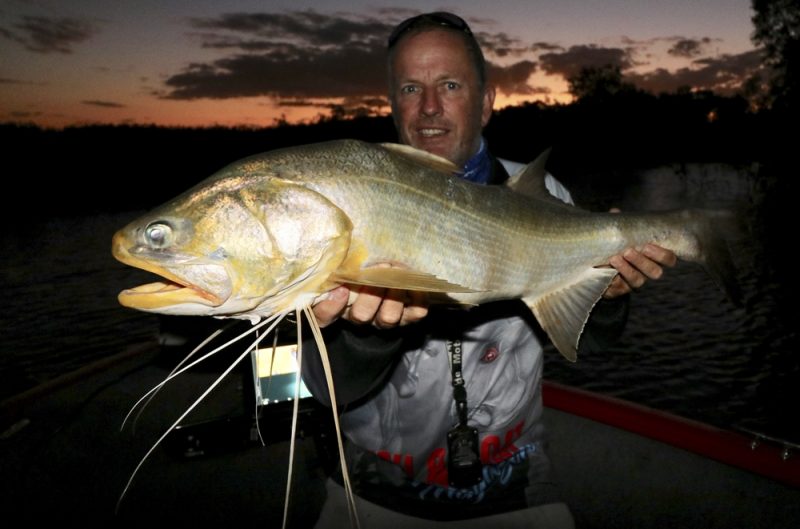 Fitzroy River, Net Free Zones, Rockhampton – is it really the fishing Mecca it’s made out to be? Well, I had a very good chance to find out when fellow writer and 40-year veteran of the Fitzroy, Bill Bowtell, invited me up to fish for a week. Bill had picked the dates months in advance, working around his favourite moon and tide phases.

The plan was to fish the Fitzroy River during the neap tides and fish outside at some of Bill’s favourite spots later in the week. Unfortunately, Mother Nature had other ideas! Twenty minutes after departing Brisbane, Bill called me on the mobile phone. The weather was taking a turn for the worse and Bill was giving me the option to cancel the trip. I decided to push on regardless. Spending a week with Bill was reward enough, and the fishing was just a bonus. 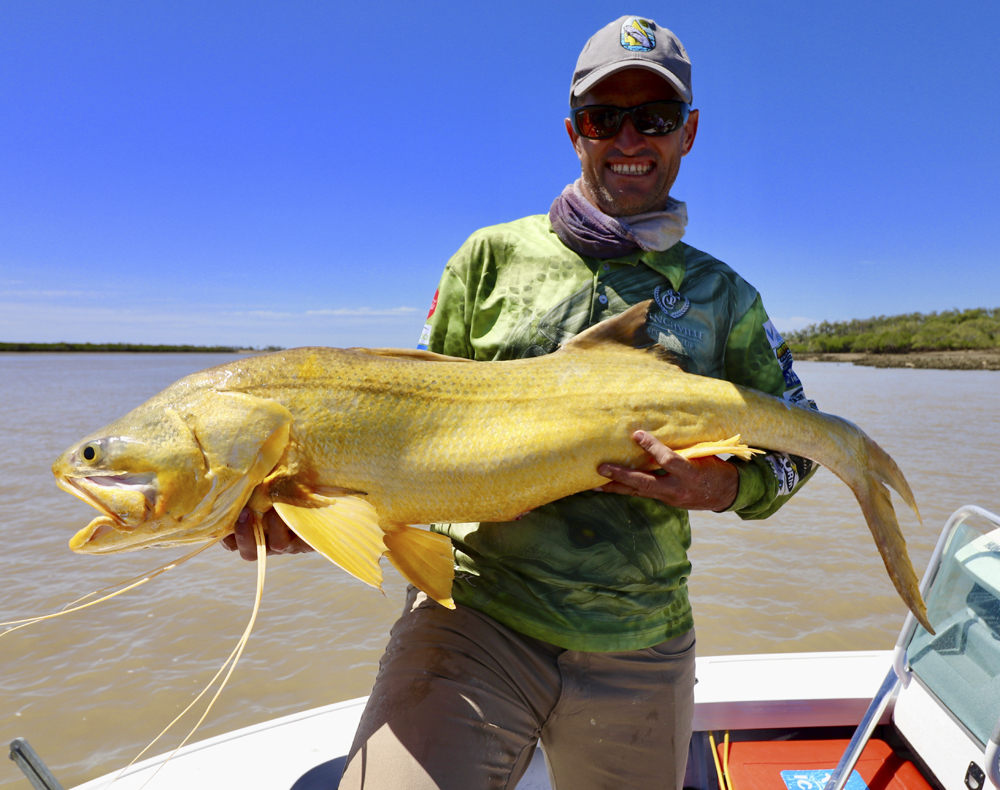 Rockhampton’s town reach was our first destination, and boy was I glad I had Bill’s local knowledge on the boat. The town reach is like a mine field of rock hazards. Bill guided me around the rocks, checking out all his favourite spots with very little luck. We managed one barra hit on a trolled lure, and that was it.

There would be almost 100km of hand pitched rock walls along the Fitzroy River. They were built during the depression after WW1 to hold the banks together and train the river. It would have been a monumental task building these walls back in the day. Years of floods have broken down the walls in spots. Meanwhile, the banks have eroded, the river widened, and some of these walls are now in the middle of the river. Anyone new to the area should take care navigating the waterway. 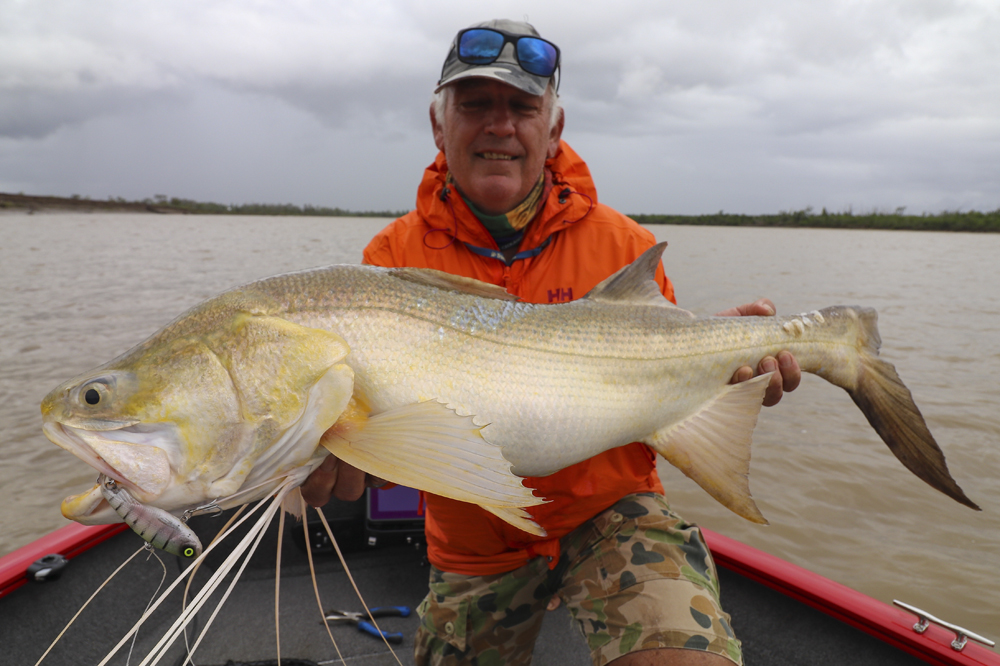 We decided to head further down river, checking out spot after spot with the Lowrance Live side scan feature. The Live unit was showing clean, clear side scan shots, but unfortunately, there wasn’t a fish to be seen. That all changed at the mouth of a creek when I pointed out on my side scan 4 nice king salmon. Immediately, I cast my hardbody to where they were sitting and scored a strike to my lure. There was no hook up, but the adrenaline started pumping. Shortly after that, Bill hooked up on his soft vibe. After a nice little fight, a 117cm king salmon graced the deck.

We stayed there for a while and didn’t get another bite. A quick scan of the area confirmed what we had thought, the fish had moved on. Bill told me stories of previous fishing conquests at each spot we tried along the way. No more fish were caught that day, but I did learn a lot about that part of the river. 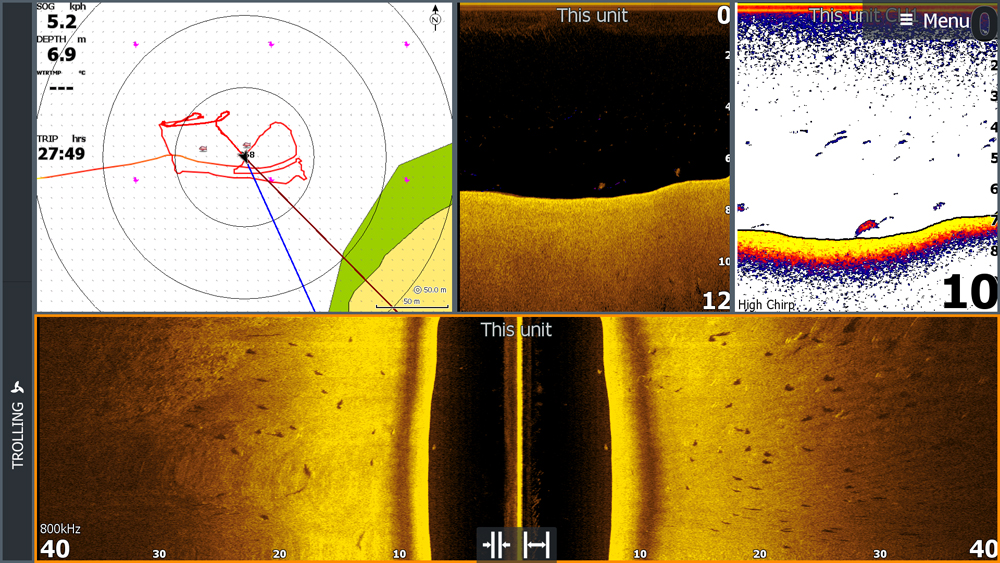 The river was dirty, very dirty. There had been a recent “Red Mud Flood” thanks to the low-pressure system that had hit Townsville and surrounds earlier in the year. The rain event that was caused by the low had sent a flood down the Isaac River, picking up red mud along the way, and dumping it in the Fitzroy. To compound things further, the barrage was opened again twice whilst I was there.

The next trip was as a “tag along” with the Keppel Bay Sportsfishing Club. Local fishing guide, Nathan Johnston, was taking a few of the club members fishing. Nathan guided us past sand bars and rocks as we made our way down the river, eventually pulling up for a group meeting. Nathan pointed out a few banks where we might find some king salmon and off we went. When I stopped short of the area we were supposed to fish, Bill pointed further on and mentioned that we were supposed to fish over there. 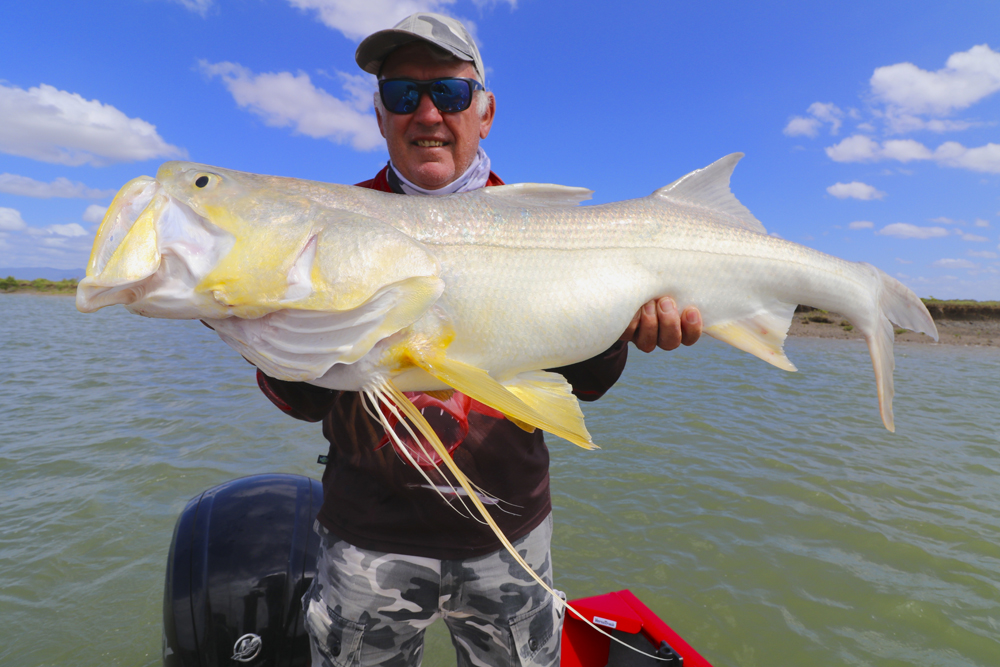 Nathan came over to see why I had stopped. I simply said, “Take a look at your sounder.” My Lowrance unit had picked up a school of large king salmon moving at speed in the middle of the river. Nathan quickly beckoned the other 3 boats to come over and fish the area.

A quick scan revealed that they were of good size and number, and scattered across a fairly large area.

It wasn’t long before one of the kids on a nearby boat had landed one on a soft vibe. That spread a bit of excitement throughout our little fleet. I knew I was bouncing vibes right amongst these fish, but I wasn’t getting any hits, and neither was anybody else. I tried different lures and techniques and still couldn’t hook up.

Now, it’s not uncommon to sit on top of a school of king salmon and not get a bite. Almost two hours later, Nathan hooked up not far away from Bill and I. After a prolonged fight Nathan landed himself a new PB King salmon at 134cm. This fish was a beautiful golden colour, and the capture had energised everyone once again. Maybe they were starting to feed?

Nobody hooked up again for nearly an hour. One of the other boats had hooked and landed another nice salmon. This beast measured 138cm on the brag mat, and was a beautiful golden colour as well. This scenario was starting to get a little frustrating! I had never sat on top of a school of fish for that long and failed to hook one.

Five whole hours Bill and I fished that school, following them and trying a fair assortment of lures, getting only a half-hearted touch each for our trouble. We eventually gave up as the school slowly dispersed.

Bill couldn’t fish the next day, but I had organised to meet Nathan after lunch. I was keen to go and try those Salmon schools again, but they weren’t there. Nathan showed me a different area of the river, and the poor form continued. The sun was starting to get low in the sky, and Nathan had one last spot to try. Hardbodies was the call and whilst I was changing lures Nathan cast into the mangroves. The first cast saw him connect to a decent barra. The 95cm barra was landed after some impressive aerial maneuvers. A short time later I landed a small king salmon, not the trophy fish I came all this way for, but it was a start.

Another massive barra explosion kept us there for a while longer. The mosquitoes and darkness eventually drove us home. That was an experience in itself, heading home in the darkness in a river full of rocks and sandbars. I had complete faith in my sounder and the tracks I had saved over the last few days. I just retraced almost 30km of tracks back to the ramp with adrenalin pumping the whole way.

Bill and I headed back out the next day and explored some more of this massive system. We were finding the odd fish on the sounder, but it was hard to target them in the high wind and current. We were actually looking for schools of fish, but they seemed to be very elusive. Eventually, we found one salmon, then another and another. I marked each fish as I was going and noticed that they were positioned along the bank in a perfect line. Even though they weren’t schooled up, I suggested to Bill that we troll lures past them.

Well, the trolling immediately paid off. Bill landed a meter-plus king salmon and hopes were high again. A couple more runs over the area, and the fish had scattered. They were still around but proved impossible to tempt again. Later inspection of the salmon’s stomach contents gave us a clue as to why the fishing was so tough. The stomach lining was completely empty, which I had never seen before. These fish were just not feeding.

The last day, I took both Bill and Nathan out, and they were both determined to put me onto a fish. Up until now, we had covered nearly 80km of the system, and I knew they were holding nothing back. Between the two of them, they had shown me most of their spots. How did I know they were giving me their all? It was the fact that Bill was lending me his favourite old “RICHO” lures. These lures are almost sacred to Bill as his wild stories of dangerous retrievals would attest. The last throw of the dice and Bill took us to one of his old haunts. He tied on a 30-year-old lure he had made for this area, and it did produce a small 60cm barra. 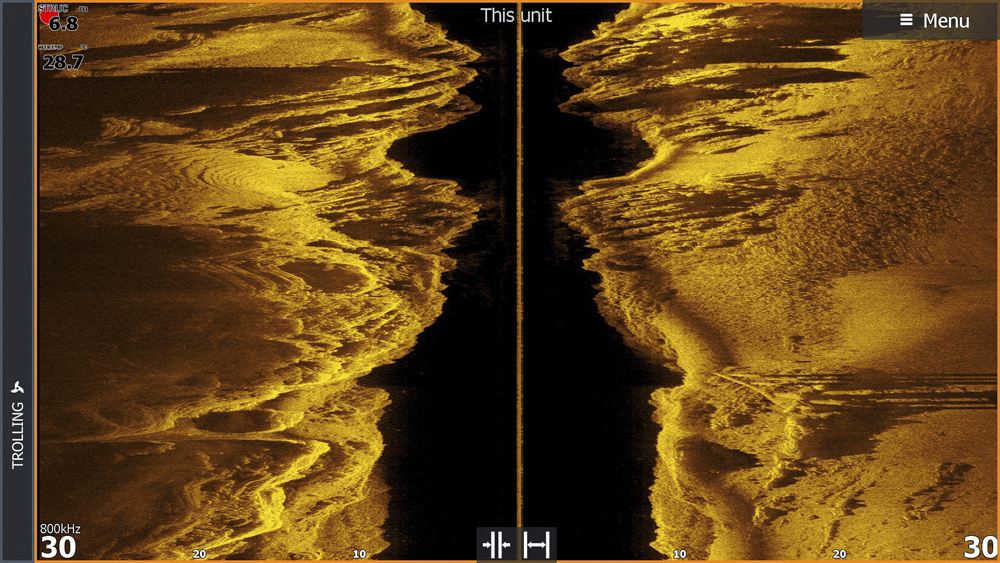 As a visitor to the Fitzroy, I felt privileged to be shown around by Bill and Nathan. They both shared a lifetime of knowledge with me about the intricacies of this system. Despite the weather and water conditions being against us, some fantastic fish were caught, just not by me!

The river itself has a long way to go to recover from years of netting. In the 3 years it has been “Net Free” it hasn’t received the right conditions for a good spawning season. Eventually, the weather gods will let this happen and when it does the river will go from strength to strength.

Both Bill and Nathan were very impressed with the new Lowrance Live units I have on my boat. The time spent on the water gave me a great opportunity to fine tune the sounders and get to know them a little better. The Insight Genesis maps are a very accurate source of mapping for navigating the river safely and would benefit any newcomer to the area.

I look forward to fishing the river again, unlocking a few more of its secrets and landing a few of the resident fish. This has been the toughest of fishing trips for me, but definitely the most rewarding. I’ll be back Rockhampton!