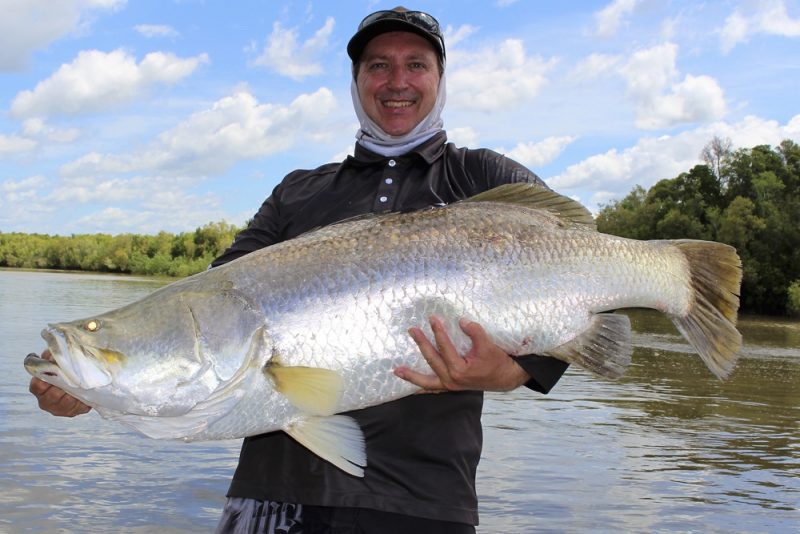 In my last article, I spoke about the essentials you will need to have a successful NT runoff, chasing the ironic barramundi. Everything is in place with the exception of the main ingredient “Rain”. The NT has had stuff all. It looks like QLD has stolen all the rain this year. And didn’t they cop it?

I’m sure there are a few areas that would happily give 1m of it back to the NT. But in saying this, it doesn’t mean the fishing will be bad. It just means that the runoff will be short and early. And there probably won’t be any or much bait coming off the flood plains.

I did a short day trip to the Little Finniss River in Fog Bay. There were streams of barra coming out of the river on the run-out tide, but they all had lockjaw. Later on, we tried to get up on the flood plains but couldn’t make it because of the low water levels. It was then we saw the runoff water was at 37.4 Deg. I’m no expert, but I doubt that any of the spawning food, which includes this years’ barramundi fingerlings will survive that temperature. Looks like there will be a generation gap in the years to come. 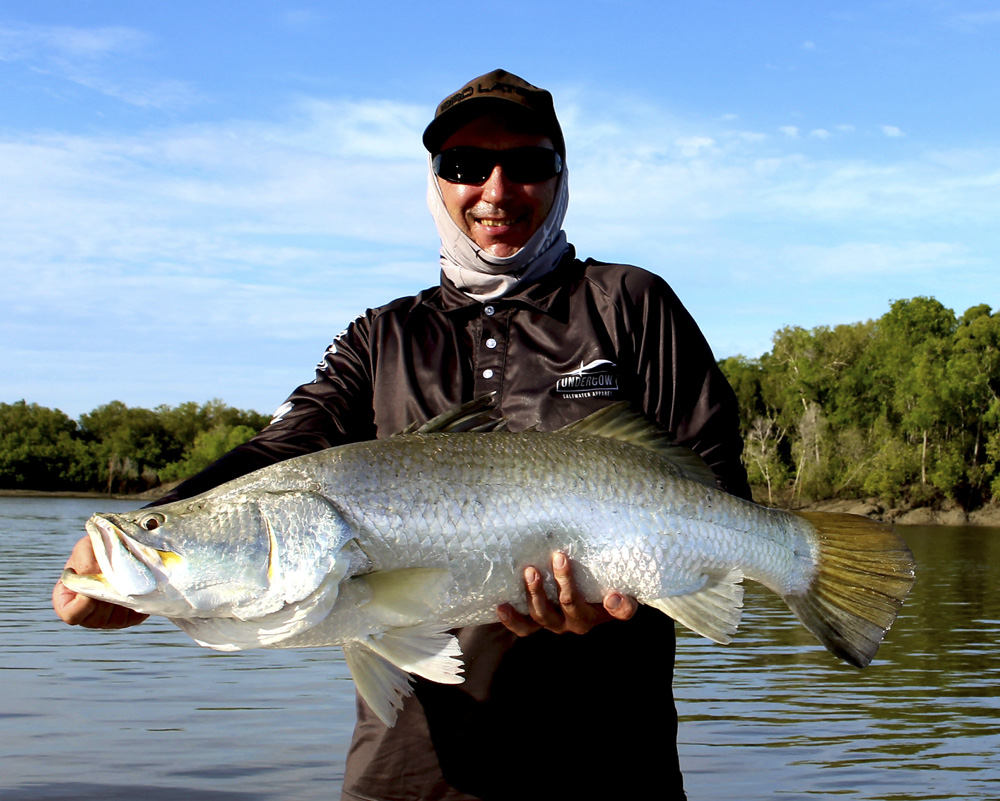 Nevertheless, there is still some spectacular fishing to be had if you know where to look. I ventured out to Shady Camp for a barra competition recently. The water levels were low there too, but with the recent abating of the monsoon westerlies, there was high hopes of some big fish. And, if the big fish didn’t turn it on, we made sure we took plenty of cold beers to see us through.

The competition was over the weekend, but we usually always fish the Friday beforehand to try and suss out where the fish are hiding in the river. And, when my good mate Jack and I got to our chosen spot, it didn’t surprise me that with a completely different wet this year to previous, the fish were not where we have found them in the past. So the hunt was on.

We finally found a few fish showing on the sounder, but getting them to bite was impossible. We just had to wait for the right part of the tide. As soon as that tide started to push in, the fish moved up in the water column and started to feed. Both Jack and I got ourselves a couple of great fish each in the mid-’90s. Healthy and fat saltwater chrome. Morale just took a giant boost, so we cracked a few beers to celebrate. Unfortunately, as soon as we thought we would be in for a good session, we lost the fish. The next few hours looked grim. 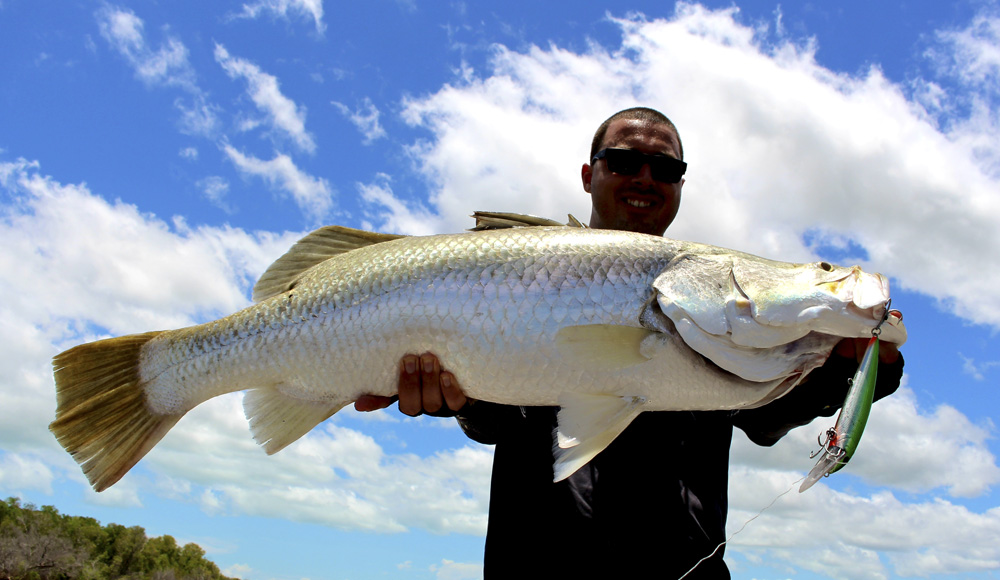 Anyone who thinks they have barramundi completely figured out is a fool. I learn every time I hit the water. I was fishing areas that in the past had produced big time, but this trip it was quite barren. So I had to ask myself “What is different?” Well, one thing from fishing competitions is that you fish them on the dates that they fall, but not necessarily the tides that you would normally fish, and these tides were quite a bit larger than I would normally fish this area. For that reason, I took a punt and started a process of trying to find the fish up river. I would travel up 1km and then troll while keeping an eye on the sounder, then repeat.

We eventually started to mark bait and bigger barramundi chasing it. We started getting hits and losing fish. The barra were hitting the lures with the side of their heads. To say it was frustrating would be an understatement, but at least we found the fish again. Out of the dozen or so fish hooked, we did manage to boat 2 or 3, so it’s not that bad.

We continued to travel up river chasing the fish when I realised that I was in parts of the river that I had never fished before. It was then that my rod buckled over big time. My Reidy’s Big Ass B52 was heading in the opposite direction at a rate of knots. Jack didn’t have time to get the other rods wound in, and I was powering back onto the fish because I could see my spool. Fortunately, with about 2m of line left, the fish stopped running. It was then I thought something was wrong. It didn’t feel like a barra at all. It just felt like a dead weight. 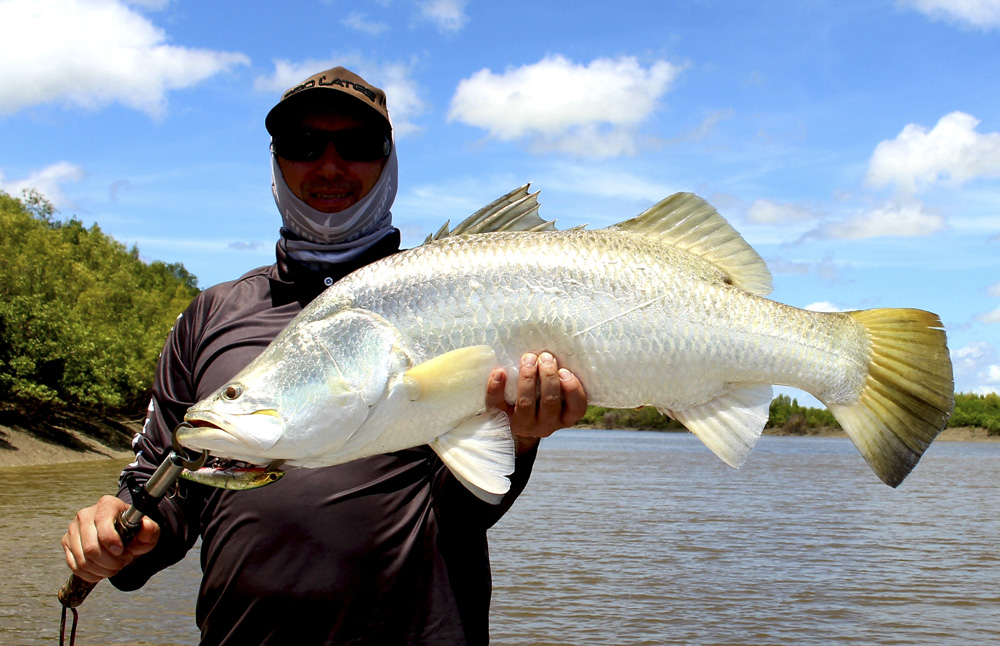 It was a slow process getting the fish to the boat because I didn’t want to put too much pressure on it. When we got a glimpse of it, we saw a massive barra tail and one hook fair up its’ date hole. Yep, that’s right. I was pulling a massive barra in backwards by its’ bum. Even now, I don’t know how we got a net shot at this fish and put her on the deck. She measured a very impressive 116cm. Thinking back on that first run, she must have got one hell of a fright. The very next troll run, Jack’s lure got mauled. The fish was lost, but the front ring was opened and just about to fall off, and the second treble had two straightened hooks. We were fishing amongst monsters.

But when the tide stopped, so did the fun. At anchor, while enjoying a few cold ones, we discussed the day. We came to the possible conclusion that with the bigger tides, the fish were racing up the river fast chasing the bait. Obviously, we needed to keep up with them, or catch nothing.

Over the weekend, during the competition, it was hot. The wind had dropped right off, and at some stages, the heat and humidity was stifling. I usually wear fishing shirts from Bigfish Gear, which is a local Darwin company. But I had a mate who very recently started his own clothing line targeting the billfish guys up the east coast. It’s called Undertow Saltwater Apparel. And to be honest, I was sceptical as to how they would perform in the searing Darwin heat. But they were great. They are light and breathe well. We even got hit by a massive afternoon storm, and the shirt was dry an hour after the rain stopped. I believe that Complete Angler in Cairns stock a big range of products for both men and women. Check out undertowonline.com.au for more details 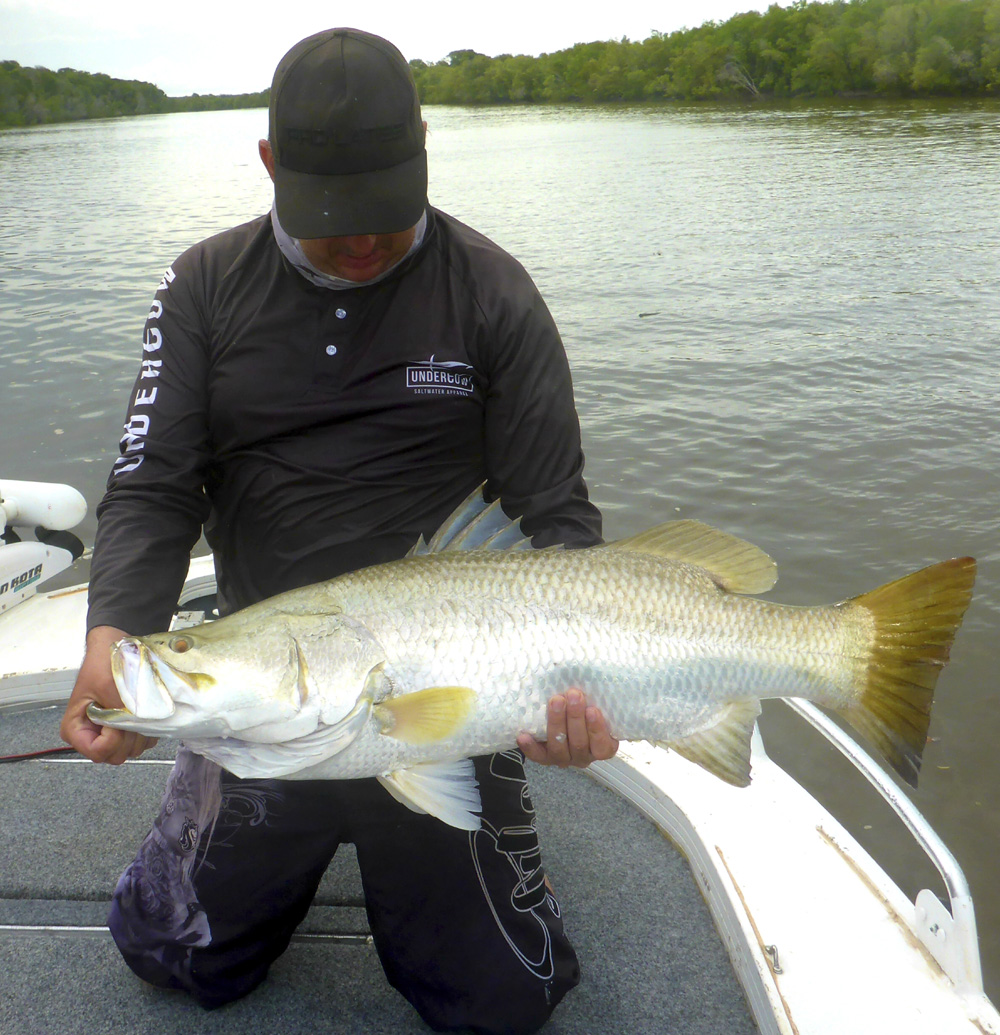 Over the weekend, both Jack and I boated some great barra. A lot of people don’t like trolling, and I get that. But this was quite exciting chasing the fish up river with the very real prospect of getting in contact with an absolute beast. There was a 125cm fish caught on the Sunday, and another bloke got spooled. There is no doubt that I will be heading back there again real soon.

What did I learn on this trip? Sure, you should use past experiences to base your starting point on how to catch fish. But don’t get caught up on it. Read the river, find the bait and clean water, and adjust your plan to that given day. I mean, on the second day of the competition I tied on a Reidy’s Big B52 and Big Ass B52 in the same colour of Tropical Thunder. I’ve never used the same colour before, but I realised that they were crazy for it. And that, together with my chasing tactics paid off in spades. I was lucky enough to get a win. Tight lines