Ballooning for Mulloway – By Jamie Behrens 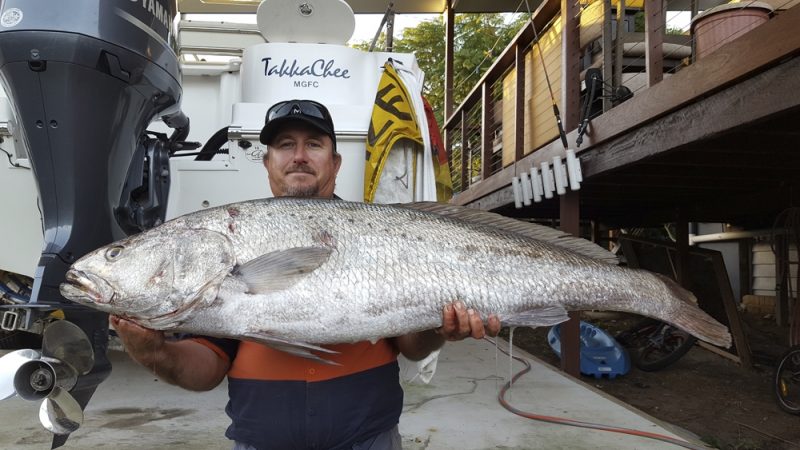 The name Mulloway, or more commonly known on the eastern states as Jewfish, usually gets most anglers attention when talked about. For me, it is an obsession which started long ago when I was a kid.

Growing up in Victoria, I was fortunate enough to live in Barwon Heads, a town that sits right next to the best big mulloway water in the state, the Barwon River. Over the years, plenty of big fish came from the river using various different techniques, but for this story I’ll talk about ballooning or float lining for them. In 1995, the Barwon river flooded. Once in 100-year event had the town on edge but thankfully, it survived. Two years later saw an event I’d only dreamed about. Large schools of mulloway started schooling up around the Barwon heads bridge. Dozens of locals would come down at night to watch big schools of mulloway (10lb to 50lb in size) run up the river. The depth under the bridge on the bottom of the tide wouldn’t be more than 2m, so seeing them in the clear water was easy. This gave me an idea. Even though the water was rather shallow, I could anchor down river and fish back into the bridge with live bait under a water bomb balloon. By suspending the bait, it would keep the bait away from the ever-present estuary rays and present the live bait in a more natural state. The rig was simple, two suicide hooks of various sizes snelled onto 1m of 60lb leader which was then tied to a ball bearing swivel. The balloon was then tied around the main line, which was then able to be adjusted if needed by sliding up or down the line. 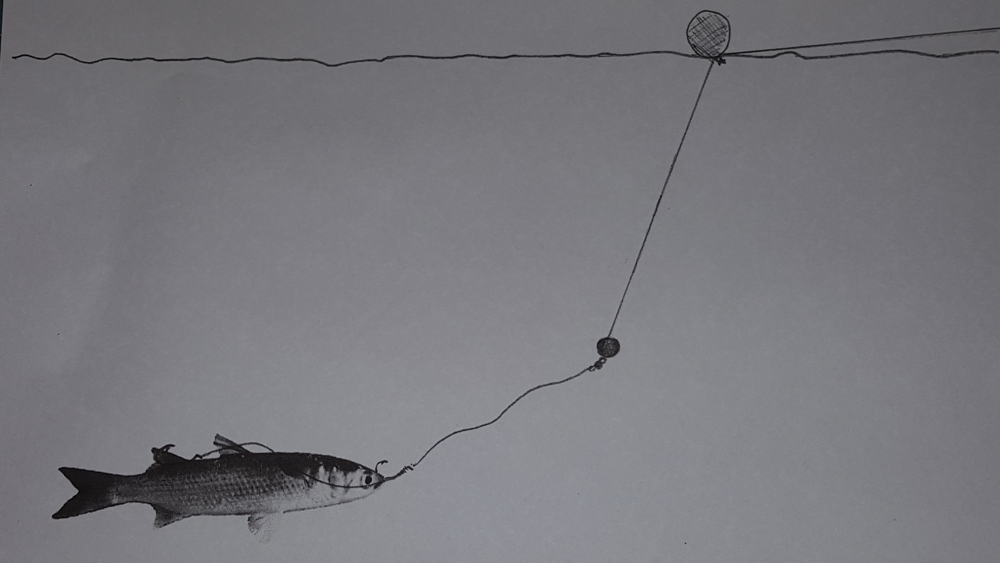 By pinning the live bait lightly through the mouth and down near the tail, I was able to feed out line until the bait was just on the edge of the light. The mulloway would patrol the darkness under the bridge and would attack mullet and salmon schooling up in the lights. Nothing better than trying something for the first time, even better when it works. First trip – 20lb mulloway. That was it, I was hooked on this type of fishing for them. Night after night I would send floating live baits back into the bridge, winning most of the battles, not all. Fishing with the reel in gear was a must as I couldn’t allow the fish to run under the bridge. Mulloway will spit a bait if they feel something is wrong so it pays to fish with some drag, if it’s in its mouth you have a chance to hook it. I rarely miss a fish using this technique providing that the rod is in the rod holder. When holding the rod, I usually have the reel in free spool with only my thumb on the spool.If I feel a take, I’ll allow the fish to swallow the bait before locking up and hooking the fish. 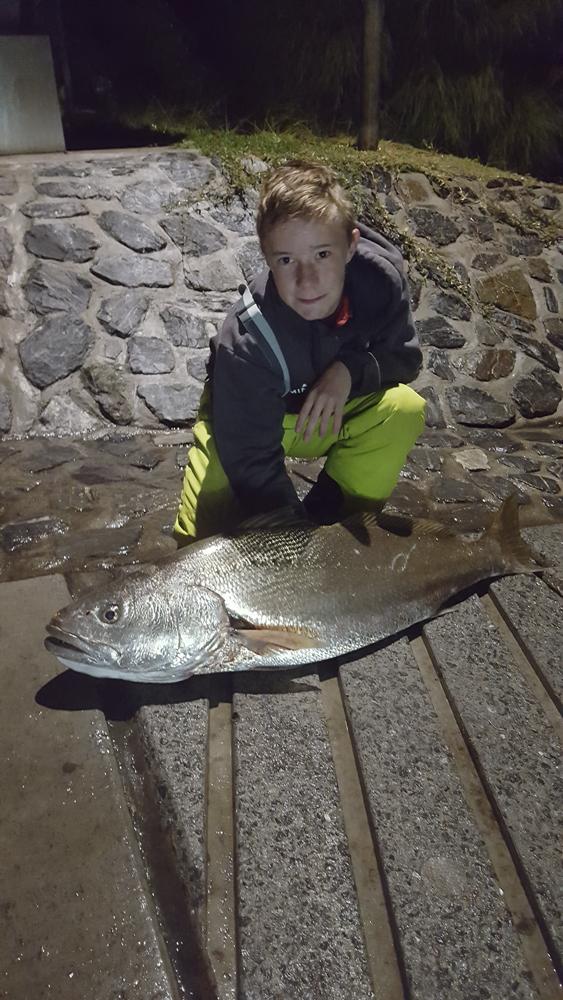 Fast forward a few decades which sees me now living on the Sunshine Coast in QLD. Different area, different climate, but still with the plenty of rivers filled with mulloway, or now that I live on the east coast, ‘’jewies’’. It took me a few years to go back to my old live baiting ways as there were vast amounts of school jew about. Casting soft plastics and even fly fishing for schoolies is great fun but doesn’t beat a screaming run on a big live bait. Luckily in QLD, we are able to source mullet (gold spot and legal sized sea mullet) with a cast net. I find spot lighting these fish at night is the way to go, and with the onset of winter, the mullet run is usually in full swing. After catching enough mullet for a session, I would then anchor up in my chosen spot. Paying attention to the surroundings even at night is a must. Pelicans gathering to feed, mullet or other bait fish on the surface, are good indicators and a great place to start. I usually use the same rig I used in the Barwon, but with deeper water, I add a ball sinker to make sure the bait is near the bottom. I do this by looking at my depth sounder to see what depth the water is, then by sliding the balloon up the main line so that the ball sinker is about half a metre off the bottom. This allows the bait to swim freely without being anchored to the bottom. Don’t be afraid to use large baits, as jewies have huge mouths. I prefer gold spot mullet between 26-30cm, and sea mullet from 30 to 40cm. With baits this big, I usually have my hooks at least 150mm apart when using big baits so that the rear hook is pinned near the tail. I usually stagger my live baits behind my boat so they are covering different zones, being mindful of the state of the tide, and watching the balloons so they don’t cross one another. A suspended bait swimming around on slack water produces plenty of fish also. This is a good time to watch where the balloon is and to have the rod in hand. A suspended live bait can be fished anywhere there is structure that may snag, thus allowing an area to be fished. 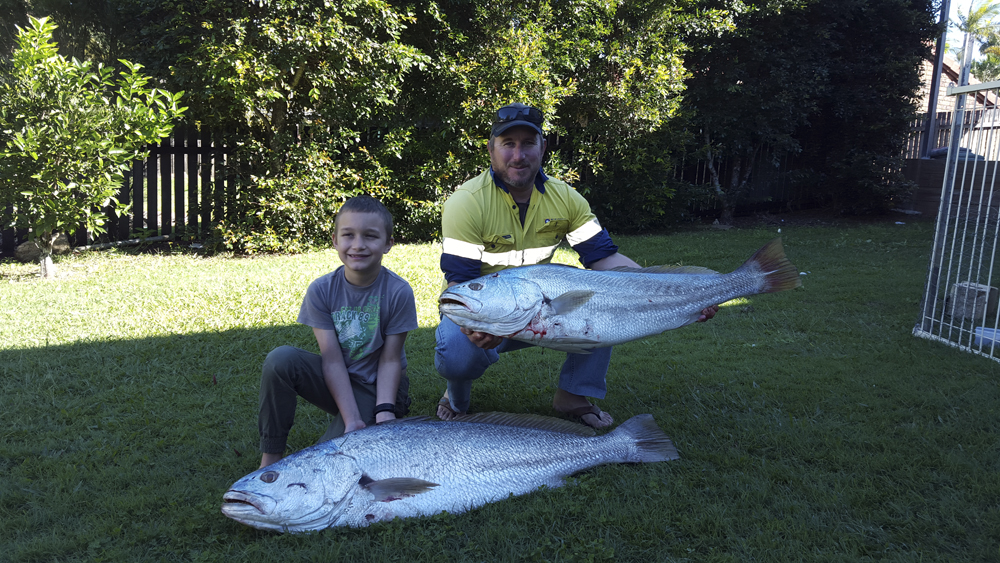 June 2018 saw all the fish that I boated caught on the balloon rig while mullet fished on the bottom were only mouthed. Don’t get me wrong, plenty of fish are captured from fishing live baits on the bottom, but it stood out to me while fishing both methods out of my boat during this month.

This season has been a little quiet, but I think that’s due to the late run of mullet. The one good session I had recently had me floating live mullet back in my favourite spot on the Maroochy River. Pelicans were amassing as if they knew something was about to happen, and like if on cue, the mullet started to push down river. A few splashes in the shallows and a huge swirl behind my balloon had me thinking, yep, I’ll get one tonight. A bull shark decided to claim the first mullet which is usually a quick affair and sees me re-tying on another rig. More and more mullet splashed about in the ebbing tide and with half an hour before slack water, my right-side rod loaded up. Howling drag followed as the fish ran down river, leaning over with my other hand winding in the other outfit before starting the motor and throwing the anchor. I prefer to chase the fish as it is easy to chase them down rather than winding against a fast-flowing tide. It also pays to have a float on your anchor rope so you can return to your spot and continue to fish. Within a couple of minutes, I had the fish in the net, 25lb of Maroochy jew. Returning to my anchor float, I preceded to deploy my baits in the hope it wasn’t the only one. It so happens it wasn’t as the 40cm sea mullet that was harassed earlier on was eaten. The fish proceeded to head for the shallows, and with that, all went slack, a rare moment pulling hooks. You don’t win them all.