So you have decided to buy a big boat! – By Graham Brake 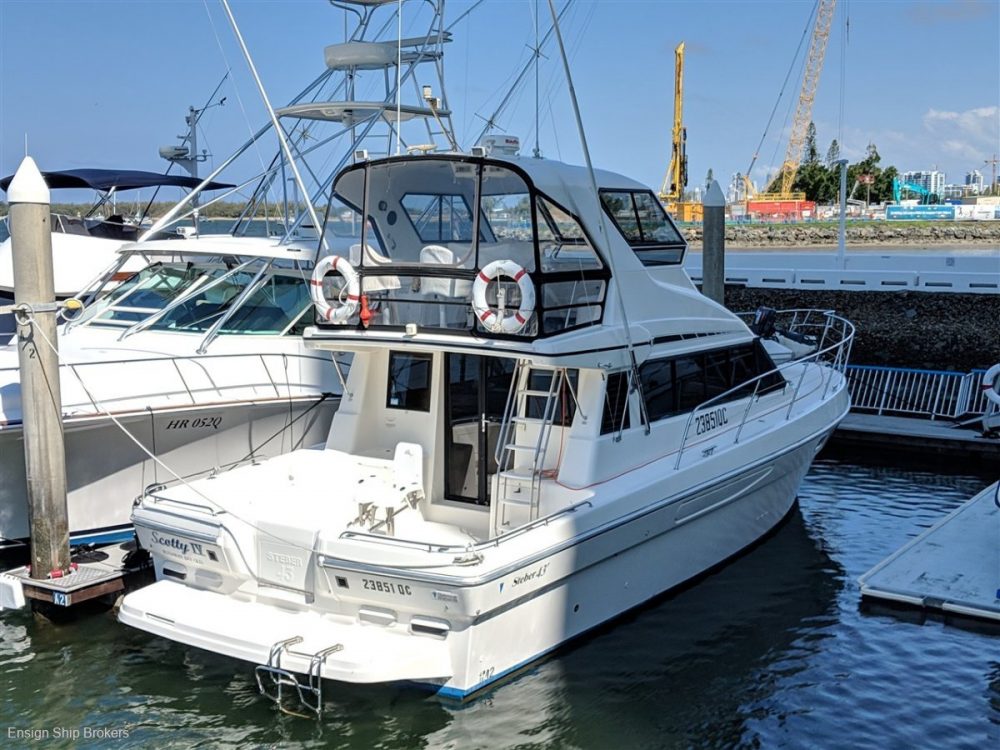 It happens! You have completed the tinny bashing years, had a couple of larger fiberglass trailer boats and have been out on multi-day charters and have now convinced yourself (and the better half) that the time is right to take the next step into a bigger vessel.  Visions of serenity while anchored at deserted reefs and islands and mental images of long range fishing expeditions with the mates fuel the dream, reinforcing the belief you are making the right decision.  As a delivery skipper, I have seen and heard all the rational used by new owners to justify their decisions.

Now, I am not trying to talk anyone out of buying a big boat.  In fact, if this is your dream and you have the ability to use it regularly and the knowledge and experience to operate it safely, I say go for it.  Unfortunately though, there is a very true saying in the boating world – “The two best days of your life are the day you buy your big boat and the day you sell it”!  One of the saddest sights is walking around your local marina looking at boats that were once someone’s pride and joy but are now slowly deteriorating and depreciating through neglect.  This article follows the journey of a recent big boat purchase by an extremely passionate fisherman with more sea-time than most people will ever accumulate and the delivery to its new home in Mackay. 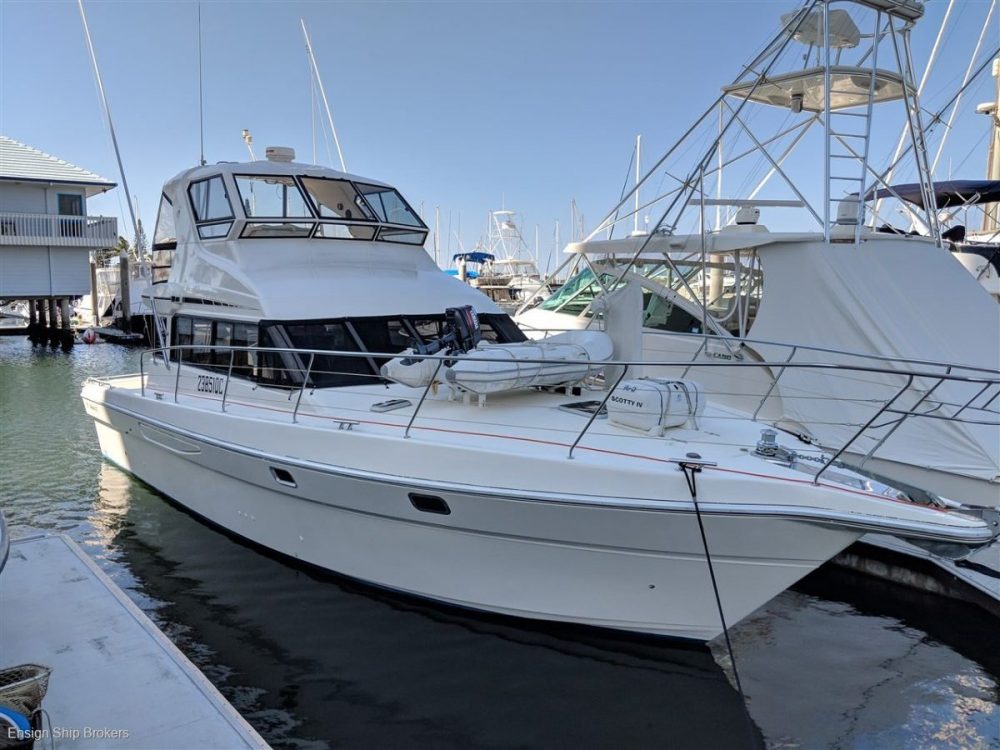 The advertisement photos that started the whole process.

For most people a 32 foot Cougar Cat would qualify as a “big boat”, so when it was sold a few years ago we all knew the owner would eventually miss it.  Even owning a beautiful Grady White trailer boat didn’t stop the emails appearing in my inbox highlighting an array of large boats listed for sale.  As a friend and sounding board, I knew that one day an add would appear for a boat that he couldn’t resist looking at.  Well, that day did arrive.  Listed for sale at the Gold Coast was a one owner Steber 4300 that had been in commercial survey but had since lapsed.  The photos alone were enough to elicit a phone call to the broker.  It just so happened that I had to go to Brisvegas for work so Greg arranged to fly down and together we travelled to the Gold coast for an initial inspection.  As with most things in life, first impressions count significantly and it was immediately obvious the photos weren’t hiding any major flaws.  For a vessel of its age (23 years) it was as good (or better) than what we had expected.  Even though it had been unused for a couple of years due to illness, the owner’s family had continued to maintain her as if it was their own and had now sadly made the decision to sell her.

When buying any boat it is important to know as much about her history as you can possibly gather and this is especially true for large boats where major mechanical repairs can easily run into tens of thousands of dollars.  Unfortunately a lot of the required paperwork was being stored separate from the vessel and with the broker promising to send us copies of everything we left the Gold Coast.  As I am sure you can imagine, the conversation was full of promise as we sat in the Qantas Club waiting on our flight home.

True to his word, within the next few days all of the records and receipts were scanned and sent through to us in Mackay and these only reinforced the fact that this was a much loved and well cared for boat.  We were now at stage two of the process of determining if we would move forward with this particular vessel and this unfortunately requires the outlaying of a insignificant amount of money.  Most people would be aware of paying RACQ or someone similar to do a pre-purchase inspection on a car, well for a boat you pay a marine surveyor.  So as part of the due diligence process, an in-water survey inspection and report was commissioned. While we waited for this to be completed, we drove north to Bowen to inspect another Steber 4300 of similar age that was also for sale as well as actually calling and speaking to Alan Steber himself about the boat. 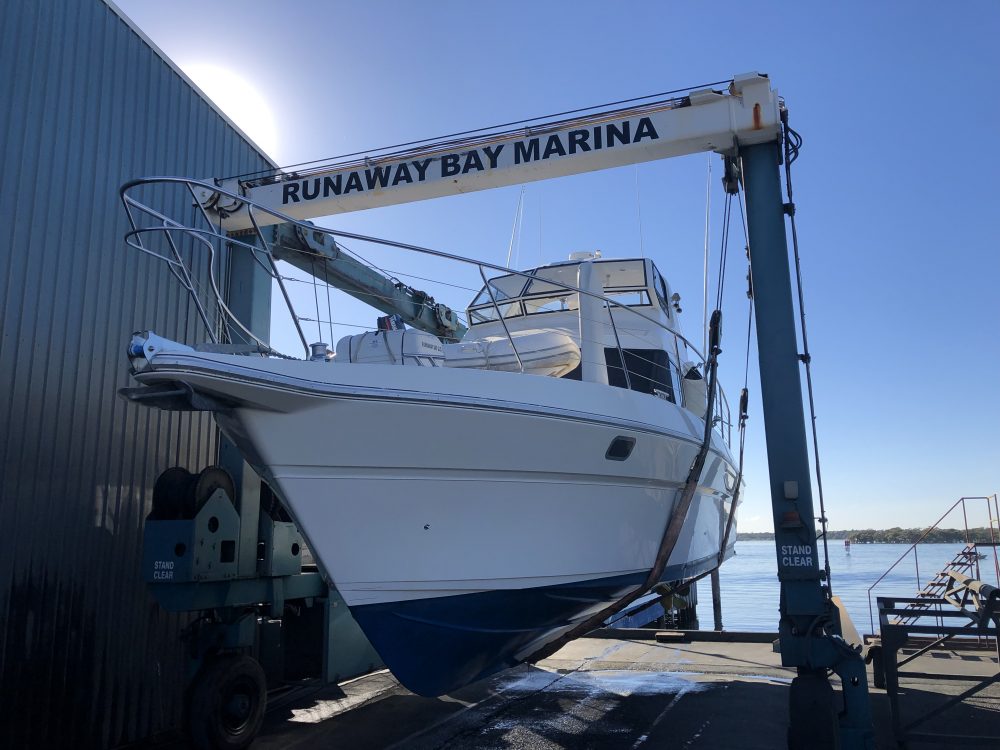 Lifted from the water for final survey inspection. Just as impressive under the water as on top!

Now Steber has made and sold a lot of boats from their factory in Taree over the years, so to be able to call the company owner and discuss a certain vessel is something you probably won’t find with any other brand.  Alan knew the vessel intimately as it was actually their display boat for the first couple of years before being sold and was happy to answer any questions we had.

The first hurdle we encountered was when we received the in-water survey report.  Greg’s original plan was to return the vessel to commercial survey status with thoughts of restarting his fishing charters, but the report highlighted the many differences between the USL code the boat was originally built to, to the current NSCV code which now applies.  The frustrating thing was that if the survey status had of been maintained, there would not have been an issue but with the lapsing of the certificate and the change from state (MSQ) to federal (AMSA) control the vessel would now have to comply with the new standard and would be treated as a new vessel.

Long and in-depth discussion was held on what this meant and how much additional outlay may be required.  In the end, the saving grace was that the boat itself was too good to discount on this issue alone and plans were made to return to the Gold Coast to sea-trial her and lift her for an out of water survey.  It should be noted here that these surveys are required for all larger vessels when they are sold in order to insure them.When sea trialing a vessel the first and most important thing you are checking are the engines and mechanical systems.  This Steber is fitted with 550HP 6V92 Detroit Diesels with mechanical controls and gauges.  In this configuration there is only basic information available to the skipper so some research was needed prior to the trials.  I had managed to procure the engine graphs which provided information on HP and fuel burn verses RPM as well as the required oil pressures and engine temperatures.  It also provided me with the all-important governor setting for maximum engine RPM.   This may not sound like much but if a vessel does not reach or exceeds maximum design RPM there could be serious consequences.  The other thing that is very important when testing a diesel engine vessel is to monitor the exhausts.  I ensured the engines hadn’t been warmed up prior to our arrival (by physically touching them) and then watched the exhaust as each was started.

The unusual wear in the stern glands that raised concern.

I won’t bore you with the theory as you can google it yourself, but the presence of black, blue or white exhaust smoke at various stages of engine operation can tell you a lot about the state of your engines.  I was happy to see this vessel started cleanly and ran cleanly with only a small amount of black smoke on acceleration.  She also ran out to 28knots at the recommended maximum RPM of 2300.

With the sea trial successfully completed it was an impressive site as she was lifted from the water for a detailed inspection. Several hours later we were once again sitting in the Qantas Club on our way home and although we wouldn’t have the final surveyor’s report for a few days we were aware of two issues.  Most of the sea cocks were frozen and required repair or replacement but more concerning was an unusual wear pattern on the stern tubes where the propeller shafts exit the hull.  While the sea cocks were not a big issue, the tube wear was an unknown and a reputable marine mechanic was organized to investigate and advise on the cause and rectification.

By the end of the next week, we had our answers.  Investigation had shown the rear engine mounts of the Detroit Diesels had slowly sagged over time causing the tubes to slowly wear.  Well, that was that, the decision was made to make a serious offer on the vessel.  Seller, purchaser and broker then went through the process of agreeing on a price that included any necessary repairs being completed and Steber 43 Scotty IV (soon to be renamed Motorvation) had only her second owner.

Next month I look forward to telling you the story of her delivery from the Gold Coast to her new home in Mackay.