Remaining one step ahead – By John Boon 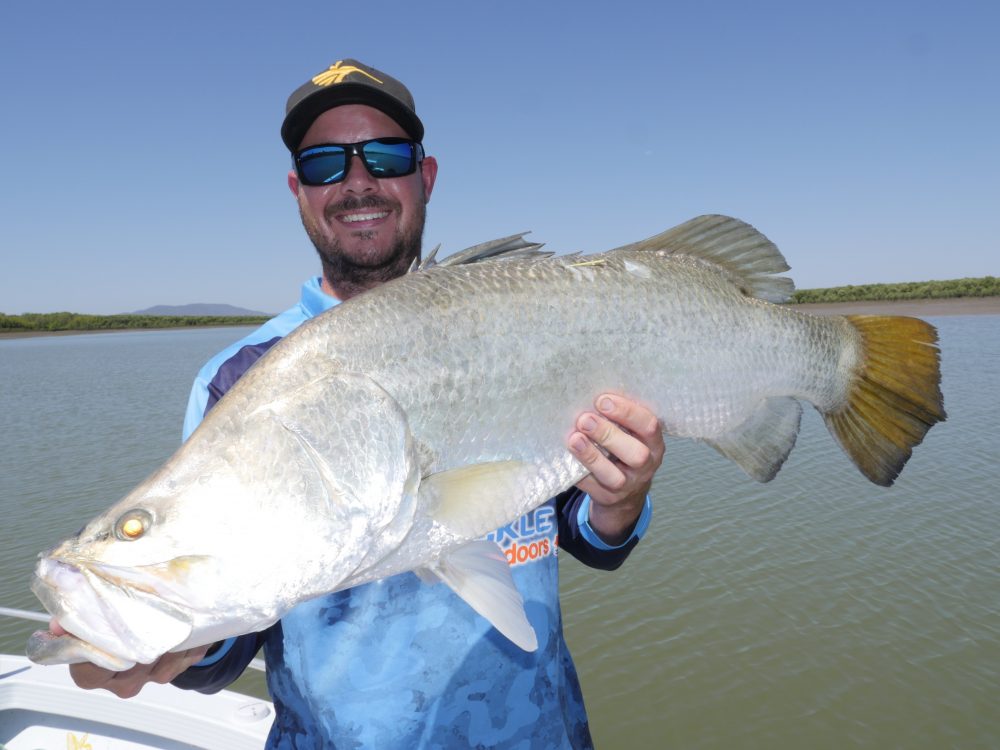 In this modern day, technology is rapidly evolving. If we look back even five years ago to where we are today there has been so many changes and advancements. Where are we going to be in another five years?

We already have crystal clear side and down imaging, 360 degree imaging, live imaging and so on. In my opinion all the technology in the world won’t make a fish bite when it doesn’t want to. If only we had that all important “feed now” button in the menu. In saying that, if we did have that ability wouldn’t that take the fun and problem solving out of the glorious sport we call fishing? 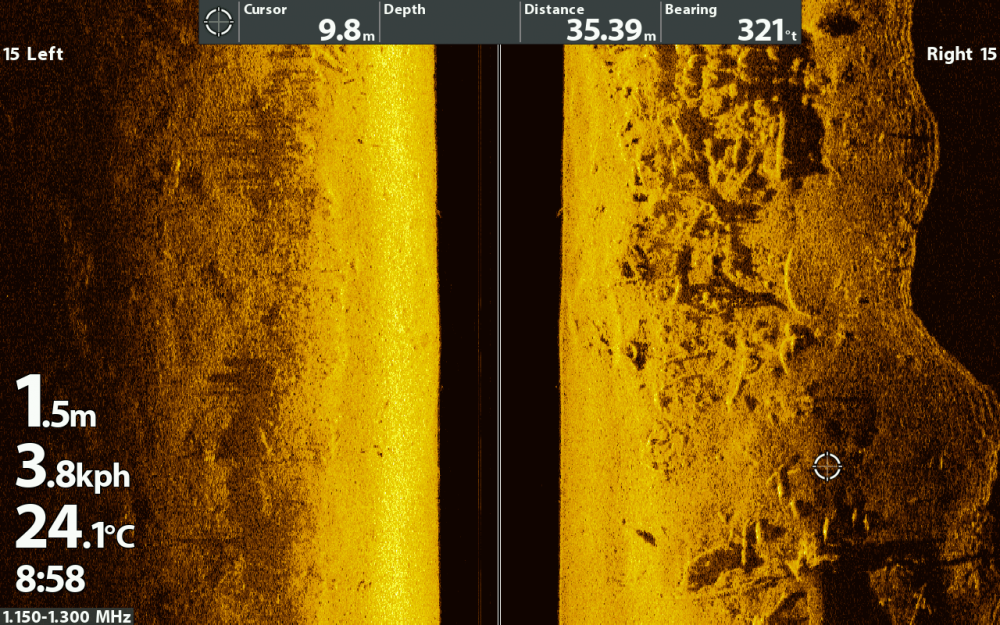 Barra hanging in the back eddie caused by a fallen tree. When they are in this position I can always get a bite from them. It was a first cast winner

OK, so now it’s time to come back to reality. There’s no button that’s going to magically get the fish to switch on, so how do we go about remaining one step ahead of those cheeky buggers?

I recently had the pleasure of gaining an invite down to the Tangalooma Island resort to assist with some training for BLA. Mega side and down imaging was the topic I was to talk about. Feedback from the presentation was fantastic with a few of the pro dealers asking more about fish behaviour. It sparked my interest into putting an article together about what you see on the sounder screen versus what you put on the deck. 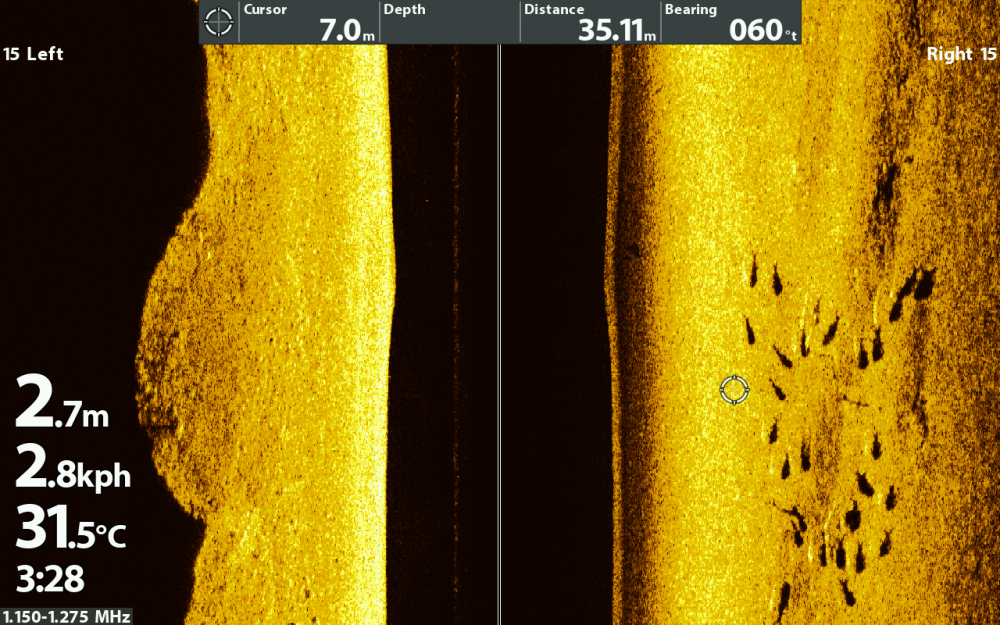 A school of moving threadies who weren’t keen on the chew.

The more time you spend with your unit, the quicker you’ll become proficient into dialing in detail and navigating the menu. Confidence with your sounder will go a long way into figuring out what mood those fish are in.

How many times do you hear it especially among barra fishermen? “Barra everywhere but we couldn’t get them to bite”. There’s a whole list of factors as to why old pink eyes won’t strike at a lure or why any particular species for that matter. What we can distinguish are different behaviours viewed on the sounder screen.

Many a good fishermen has been easily fooled by the numbers of fish located in a particular area. Words of “we can’t lose here” are the initial exchange between anglers as they race to get lures into the strike zone. Hours later with a pile of lures and borderline exhaustion, the next chat generally goes along the lines of “I guess they just aren’t hungry”. Sometimes this can be true, depending on the local conditions in the area that’s been fished, but more often than not, there can be missed signals staring the angler in the face. I did touch on this subject in last month’s edition, but it’s time to dive in a bit deeper, so let’s do it. 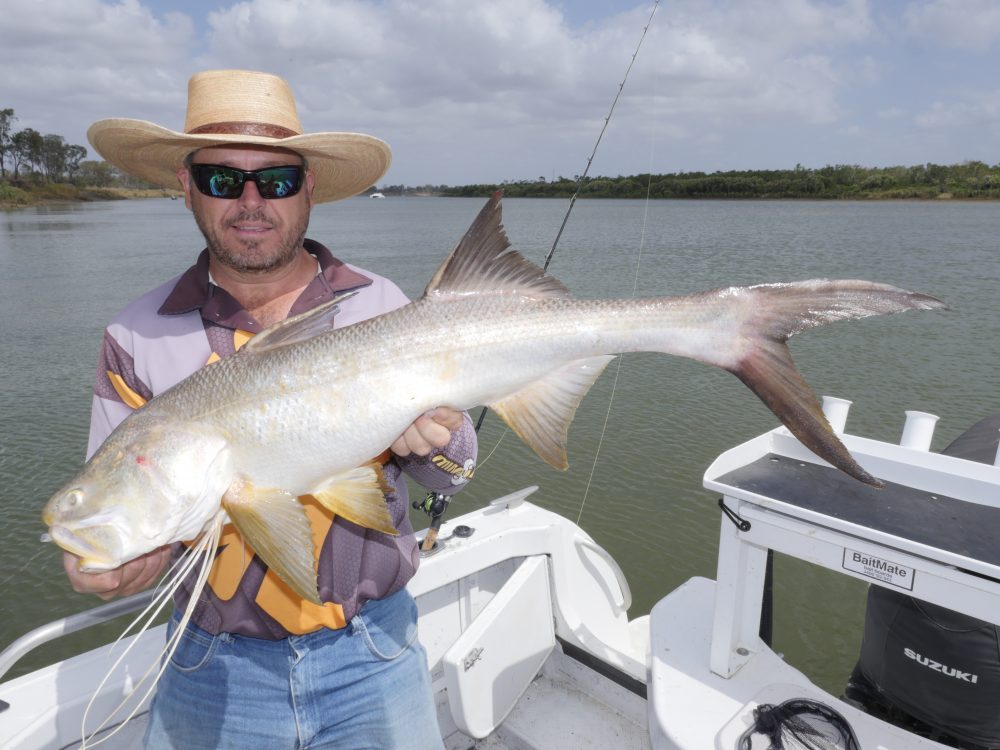 Dan Baker with a meter Fitzroy king. The school were found to be stationary but inactive until a live prawn was used to get the bite.

Schools of barra or threadies that seem to be moving a lot of the time are the hardest to get a bite out of, not impossible but a lot more difficult. Number one reason for this is that they are unsettled and not staying in the one area to allow the angler to keep different presentations in front of their noses.

It’s a very good way of frustrating even the most placid angler. You scan them up sitting behind the snag, fire off dozens of casts, change lures three or four times and come up empty, no hookups, not even a tap. Scan back past the snag and all of a sudden they are fifty meters up the bank. The biggest question that will cook your noodle is “how long have they been gone for?”

Did you get a few cast at them before they moved? Did they see most of your lures and retrieves? In our experience you seem to get maybe five to ten minutes at a school before it moves position on average. Sometimes they will move straight away and other times you will get a bit longer. Do we get frustrated and throw teddy in the dirt? Of course not, lets apply a bit of logical thinking to better ourselves. 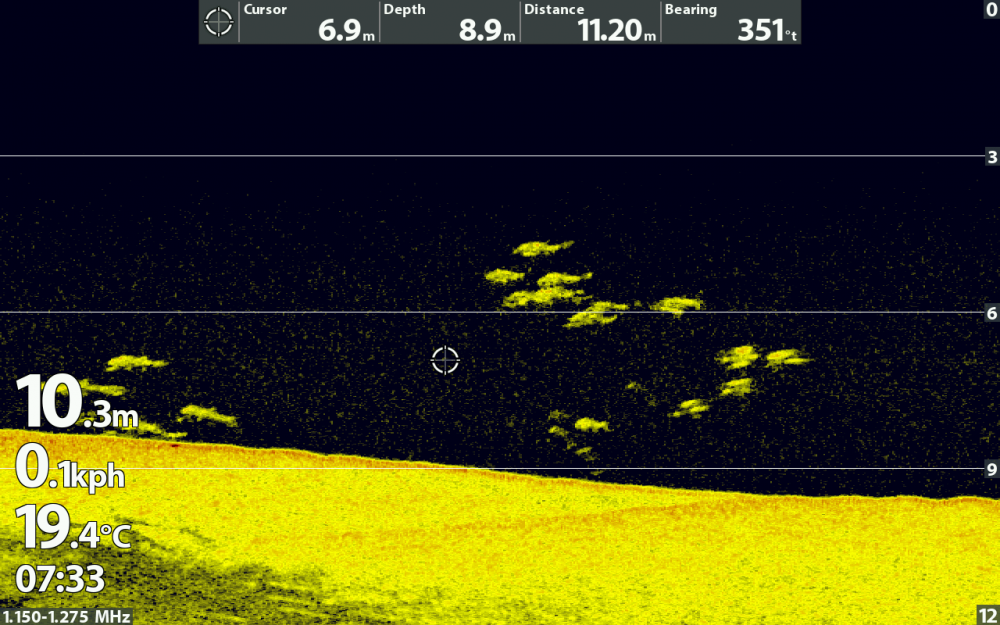 Big threadies high in the water column and moving, we couldn’t get a bite from them.

What we need to know is if the fish remain present or if they move. One way of achieving this is to position the boat out at 90 degrees to cast at them. That way you can keep an eye on the side imaging while firing off casts. One step further if that cast angle doesn’t do the trick you can sit anywhere around them and all you will have to do periodically is take your electric motor off spot lock and just turn the transom of the boat in the schools direction giving the area a quick scan. That way you can distinguish if the fish are still present. If they are, you can re spot lock and vary techniques, if not it’s time for a re scan. 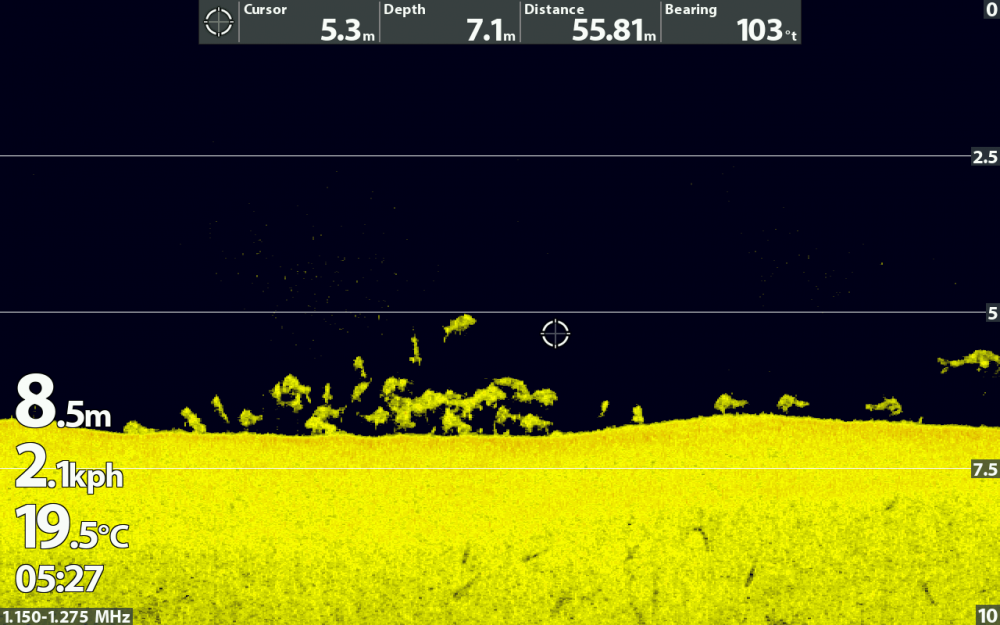 Tide change and the threadies were sitting differently and ready to eat.

Another little gem which works fantastic for this purpose is Humminbird 360 technology. I’ve got the old model which scans in 455khz. You are still able to see where fish are hanging without having to chase them. I believe mega 360 will be off tap for this sort of fishing, I’ll be hoping to have a report in the near future.

Spending time at any chosen location holding a school will see the angler gaining vital knowledge about that spot. Playing “chasey” is all too familiar, but just when you give up hope they might settle into a position. This position might not have anything to do with the snag previously talked about. They may move a few hundred meters and settle in something as insignificant as a small hollow or even just a dip in the bank. Anglers without side scan technology would just cast at the timber above the water as that’s what they can see. The real action might only be a stone’s throw away.

Once those fish have settled have a look at how they are sitting. In this area (Rocky NFZ) suspended fish are tough to get a bite out of.  I’m normally looking for stationary fish, hard to the bottom, grouped together with their head into the current. This is not a hard and fast rule because at the end of the day if I scan fish I’ll always have a cast, regardless. 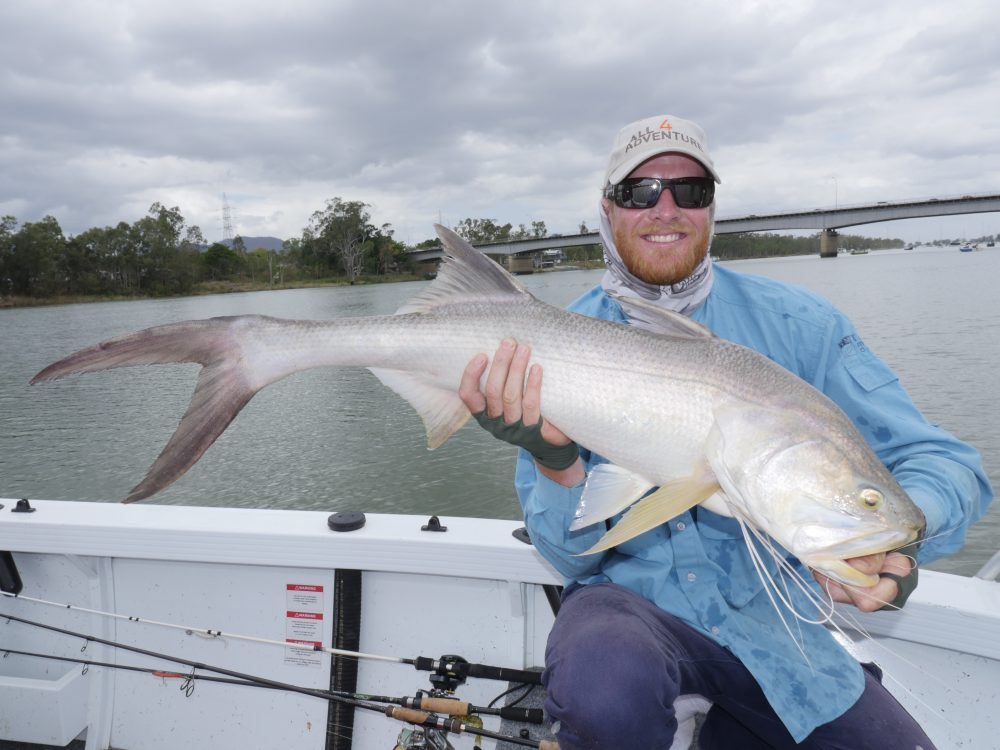 Derek Lee with a nice Fitzroy Thready. They were grouped tight on the bottom. Down sizing helped get the nibble.

Another observation that can be made through the use of your side imaging is what I like to call breakaway fish. You might have a school of say 50 barra or king that seem reluctant to have a nibble. Make sure you keep an eye on those little pockets of fish, even ones and two’s as these could be the actively feeding fish.

The main school might be doing their best to avoid the boat every time you pull up, but what about the two lone fish that are stationary? They might be sitting in a drain near the main school or even in a sand depression.

I once followed a school of king salmon around for a few hours. I would spot lock, cast and re scan when they moved. It was super frustrating as the conditions weren’t ideal with an overcast day, wind and the odd shower. I was just about done with this spot to move on to find greener pastures. What happened next was really cool. 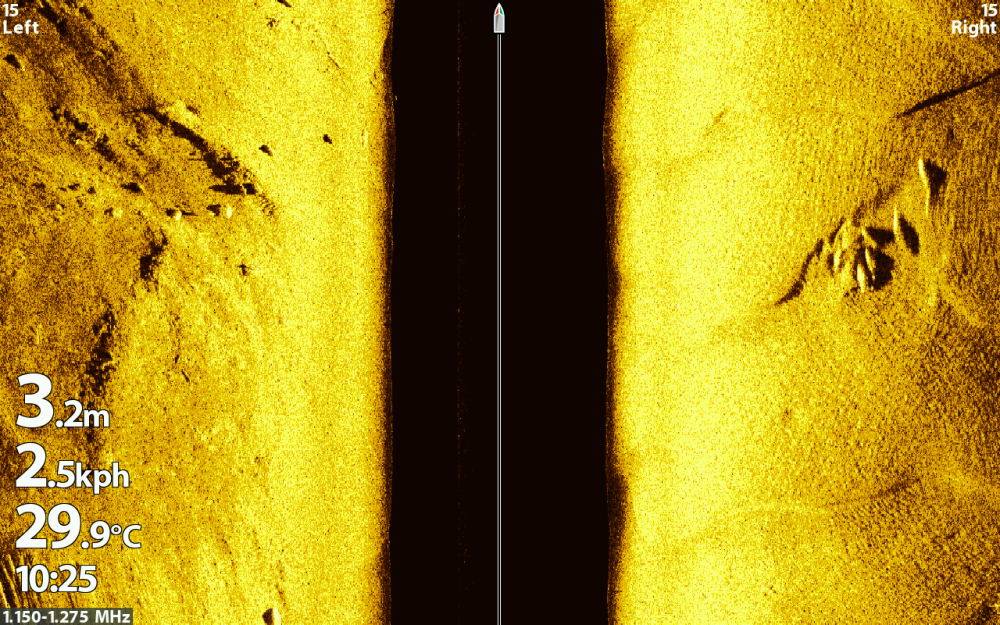 On the right these 70-90cm barra were grouped together, low to the bottom sitting in the sand depression and head into the current waiting for bait to wash down the sand bank.

I watched a small group of threadies break away from the main school and move in a different direction. I’m glad they were moving relatively slow as I was able to keep scanning them up. They moved a few hundred meters away and took up residence in a shallow drain. No sooner had they settled, I spot locked and began to cast, no response.

Why couldn’t I get a bite? Prawns flicking along the drains and here I was throwing a paddle tail. A quick change to a prawn imitation and PRESTO; instant hookup. If I was lethargic in trying different tactics or had fallen into the grind of fishing the pretty school of numbers instead of observing their behavior the results would have been far different.

Another example was when I took my daughter to chase monster threadies about 12 months ago. We scanned an entire area and did find where the threadies were hanging but unfortunately the sounder was showing them quite high in the water column and you guessed it, we couldn’t even get a nibble. 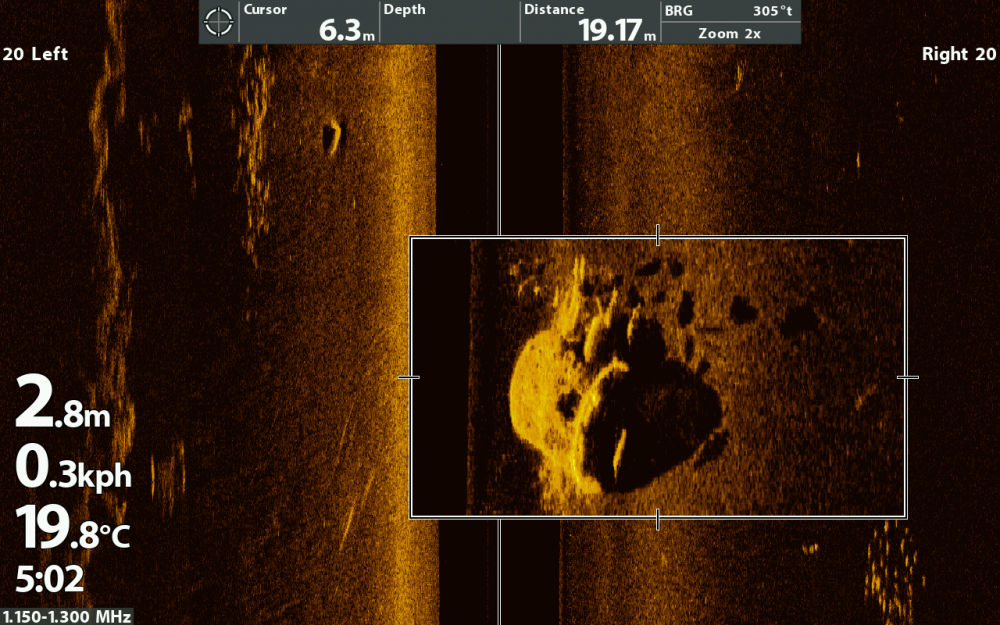 Even with the cold water temp we were able to get a bite from these small barra.

We came back on the run in tide and it was a different story. Multiple schools had taken up residence, grouped together and looked what I would call in “feed mode”. It was just a case of picking which one looked the most promising.

What about targeting groups within the school itself? We have seen this scenario many times especially up in the town reaches of the Fitzroy River. Barra love rocks, but next time you are looking at some fish sitting on a rock bar or rock patch, have a look where different groups are located.

It’s my understanding that each spot is unique, and you need to spend time watching what the fish are doing. In the above instance with barra sitting on a rock patch, how about positioning the boat where you can cast at all three groups? 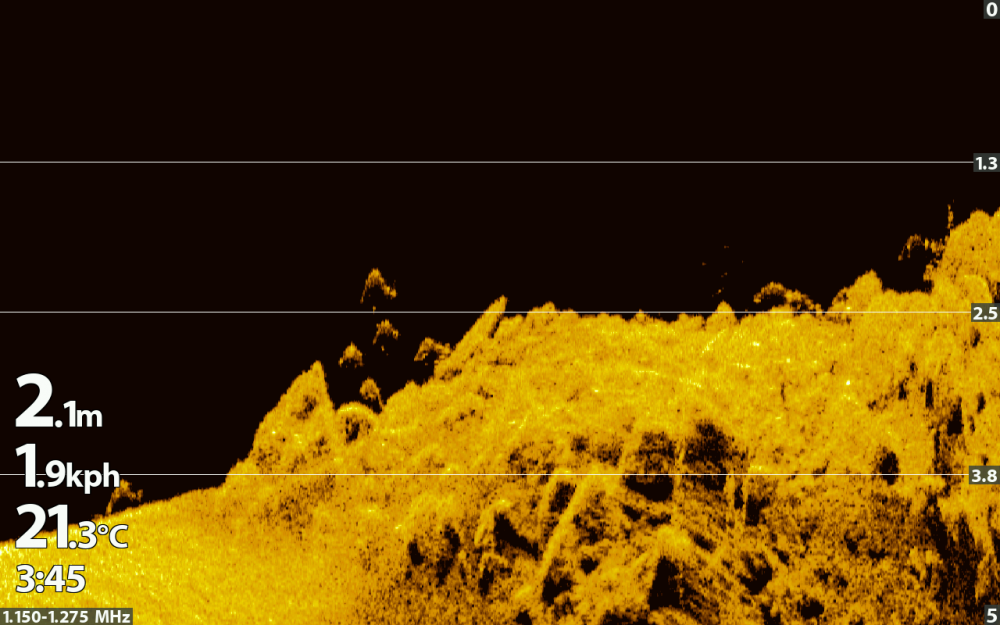 The barra on the front edge would bite while the group on top wouldn’t. Looking at fish location before casting is part of figuring them out.

If you have two anglers on board, it can make this process very quick as one can target the front, the other targets the back and then meet in the middle so to speak. We have different bommies we fish in the Fitzroy and some barra seem to feed in the back eddie and some on the front. ALWAYS document your results.

With time on the water, and gaining experience looking at different fish species you will be able to figure out when they want to bite. Don’t worry, there are still plenty of times where the fish are in the perfect position but they still won’t bite, that’s just fishing. A number of other factors come into play including the weather, but that’s another subject for a different time.