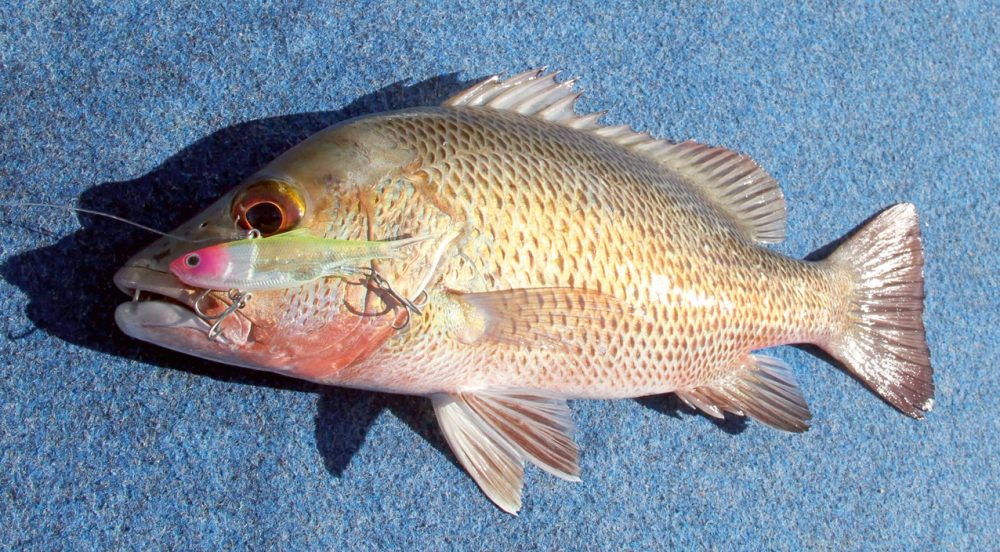 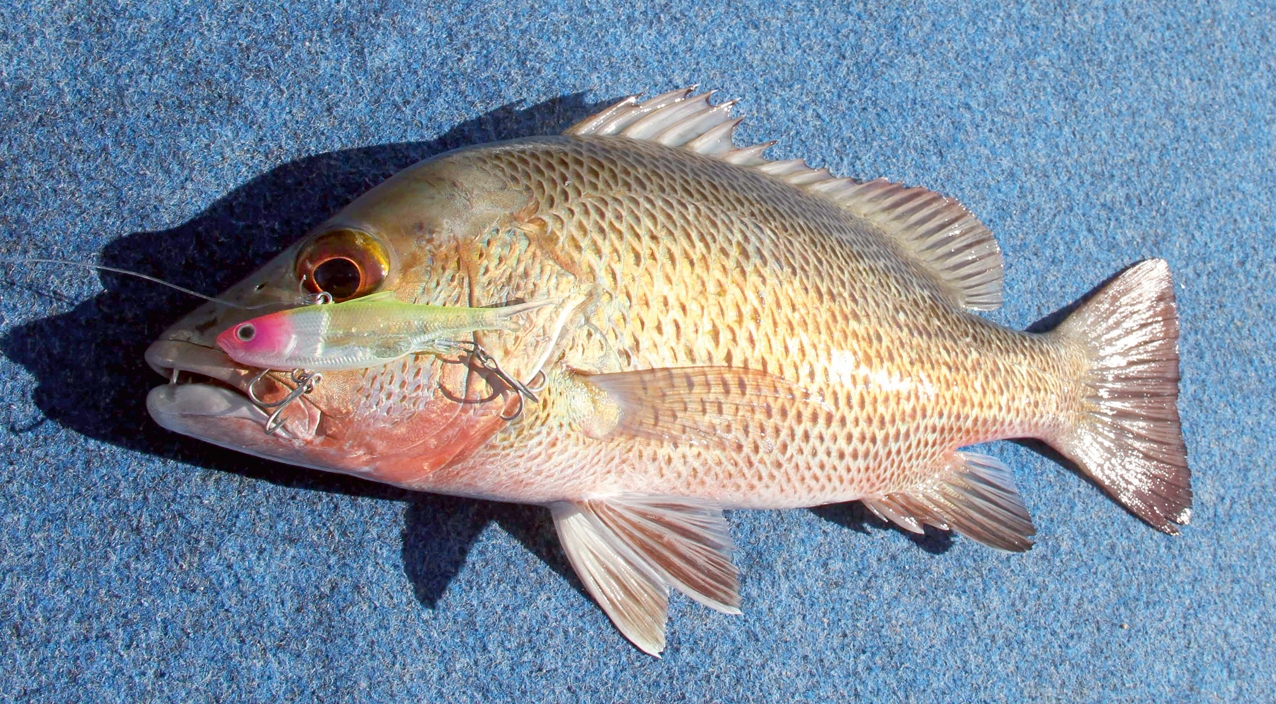 “Fish on!” I exclaimed excitedly as my spin rod bent over and the braid began screaming off the spool. My deckie for the day Drew looked over in disgust as this was fish number three from this stretch of bank and so far none were his.

As the red and silver flanks of another solid jack flashed in the water I tightened the drag and turned its head as it tried hopelessly to power back into the snags and avoid capture. I soon had the fish subdued boat-side and my smile grew a little wider when I called for the net. Drew grumbled his way over to do the honours and as I boated the fish I couldn’t help feel pretty happy.

From my point of view, the situation was quite hilarious, however, I could see the frustration on Drew’s face and he was not seeing the funny side to his lack of action at all. Fishing a deep undercut bank we had both opted for soft plastic vibe style lures as the sounder was showing the bait and fish were holding deep along the bottom. This was not surprising and was what we both expected as the water temperature was still below 25 degrees and the jacks and barra were still very lethargic in terms of moving distances to find a feed. We were going to have to put the lures right in their noses to get the bite and this is where soft vibe lures really perform as they can be fished right on the bottom and provide plenty of profile and attraction whilst staying in the strike zone for long periods of time.

Now there are plenty of soft vibe lures on the market and the reason for this is the simple fact that they are so effective, especially when fished in the right situations, like when fish are holding deep and other techniques are not finding success. However, not all vibes are the same and whilst they may look very similar in appearance, they often have subtle differences which translates into big differences below the water. In my opinion, one of the biggest differences when differentiating between soft vibes is body shape, in particular how round and thick the vibe is. This characteristic alone can lead to distinct differences in both action and imitation, especially under the water, and let’s face it, this is where it counts. There are plenty of lures that look the goods, but action creates action and the Samaki Shimmer was certainly working for me today.

On this particular trip I had carefully selected the Samaki Vibelicious 100mm 20 gram soft vibe for this very reason. When compared to other soft vibes on the market, the Samaki has a distinct thin body which imitates the shape and profile of a herring perfectly. When you couple this with the Vibelicious’s shimmering swimming action it really does encapsulate this bait fish imitation to a tee. We have all heard the old saying about matching the hatch, but taking note of what bait is swimming around where you are fishing is often just as vital as what is reading on your sounder. On this occasion I had taken note of the small round disturbances on the water’s surface and flashing silver streaks below the surface right along the bank we were fishing. It was clearly obvious that the current pushing onto the bank had also pushed large schools of herring there as well and this was what was attracting both the barra and jacks which were registering on the sounder. I also opted for the chartreuse pink head colour as its silver body provided the necessary flash to attract the predatory fish and the red head provided the contrast needed to convince them that this single fish out of the hundreds on the bank was injured and easy prey. To add to this I had opted to utilise the Vibelicious shimmer-style action through a series of tiny rips upwards before letting it fall back to the bottom. It was obviously working as a steady string of jacks had found the 10cm long softy too hard to resist and had smacked it head-on in typical take-no-prisoners jack fashion and the action was far from over.

With the next bank showing little signs of life on the side imager, we motored up to the next stretch to find even more barren ground with little signs of bait and fish. With the tide beginning to push in, we knew this was going to be the peak bite period, so we opted to head back to the same bank which produced the jacks and fish it again, as it still showed plenty of bait and fish. This time I was a little kinder and lent Drew a red gold-headed Vibelicious whilst I opted for the larger 125mm 30 gram version to try and entice something a bit larger and more silver than the 40cm jacks I had extracted earlier. First cast and I thought I was about to have a mutiny on my hands when my rod loaded on the second hop, however, when a grunting catfish made its way to the boat it didn’t seem so bad. Thankfully Drew was next on the board with a solid cod and then a queenfish which had us thinking barra. We didn’t have to think long before Drew’s red gold head Vibelicious was snaffled by a solid barramundi which quickly eliminated all his grumpiness after its first jump. I had a feeling that the red gold head colour would entice a barra, as it had been pinning quite a few freshwater barramundi during recent kayak trips. At this point I was starting to feel a little left out, so I returned to the 100mm size and, sure enough, a pale white jack found the VMC spark point trebles, once again creaming the lure head-on. It really pushed the point home that imitating the size and profile of the surrounding bait is really important and even the smallest of differences can sometimes be all it takes to make a trip successful. I finally did manage a fish on the 125mm and whilst it was only a flathead, at 82cm it was an absolute monster and close to my personal best. In fact, I began testing these vibes during the cooler months and the number of large flathead which scoffed them down was pretty impressive. I attributed much of this to the fact that this was a dominant time of year for big flatties, however, even through the warmer month of September this softy has continued to pin some very large crocs.

Whilst there are plenty of excellent soft vibes on the market, the Samaki Vibelicious’s tight shimmer baitfish action is what defines this soft vibe from the rest. It’s also built north Queensland tough with 10X plastic construction, premium Japanese through wire construction and, most importantly, with 4X VMC Spark Point hooks there is little need to get the split ring pliers out for these lures. In the two months of solid testing I have yet to tear a wire or even have the wire begin to rust, which is a common case for many other vibes on the market. The plastic doesn’t fall away from the body either and the whole construction is very tidy.
The Samaki Vibelicious is a sturdy and effective soft vibe and the 125mm version would be just as at home being flicked around inshore reefs for trout and fingermark as it would be for jacks and barra. The other important point to note is that it offers plenty of versatility in retrieval. Like most vibes, it works on the drop and through a series of hops and rips; however, the Samaki also works well on a slow roll which is great news for barra fishermen.