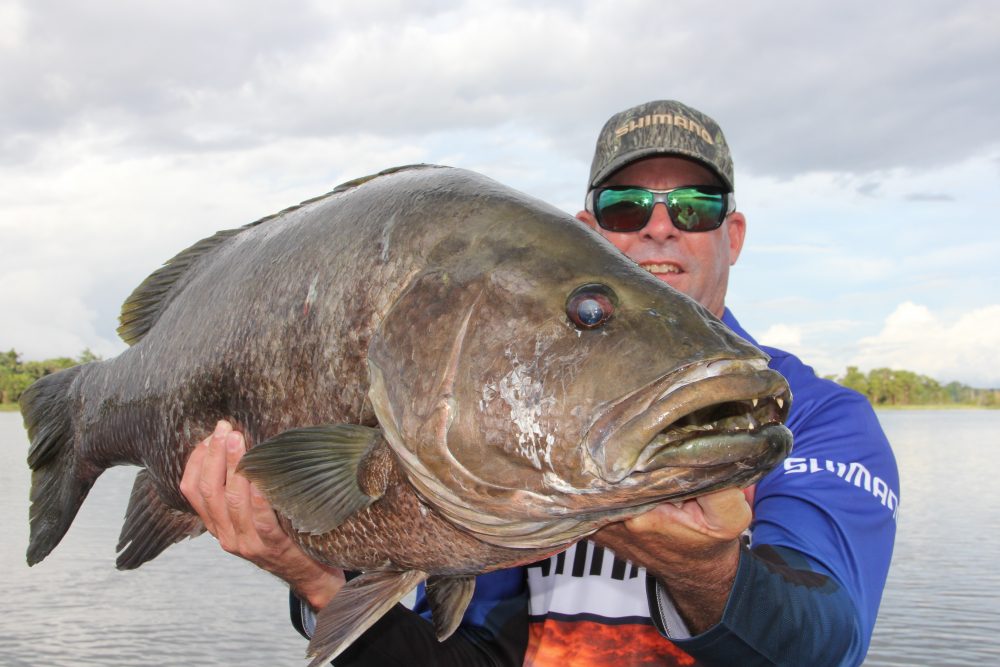 For many years, I had dreamt about catching a monster black bass in PNG and finally the opportunity arose to travel there recently in October, with a group of good mates. I had heard about a new lodge situated on the shores of Lake Murray that was producing amazing numbers of large black bass. It had not been open for long, but several of my friends had already visited and returned with stories of big bass and great hospitality making the visit truly memorable. 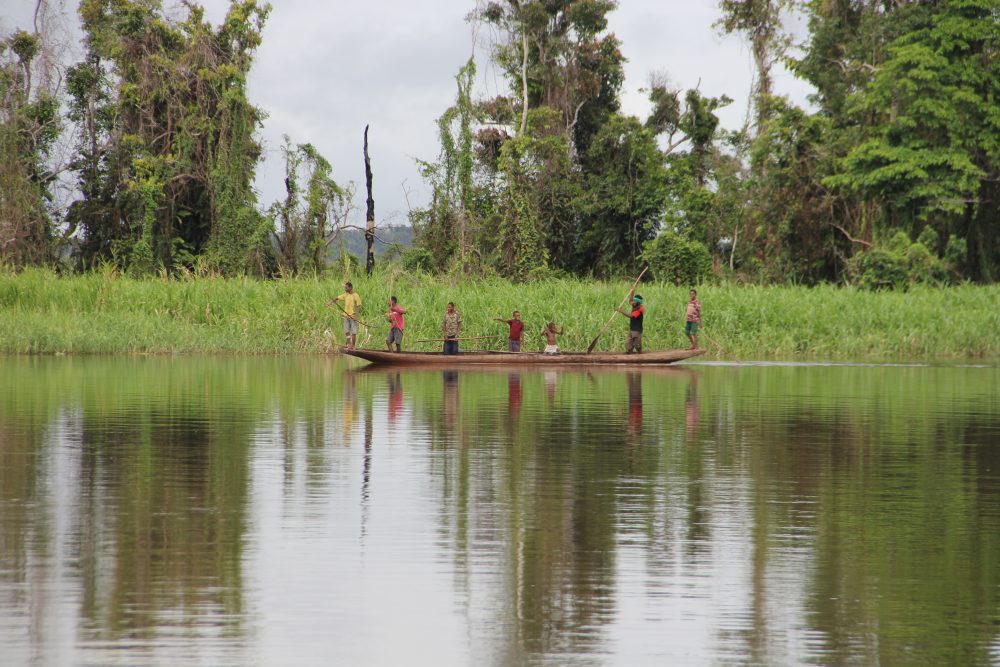 A local hunting party heads out after some deer.

The journey to this remote location involved a fair amount of time and plenty of flights from Darwin. First, we flew to Cairns in Northern Queensland and then on to the PNG capital of Port Moresby. From there we took a connecting flight to Mount Hagan, the third largest city in PNG, with a population of around 50,000. After staying a night at the magnificent and picturesque Rondon Ridge Lodge, we chartered a flight to Lake Murray the following morning.

Lake Murray is the largest lake in PNG. Interestingly it is also known for sightings of its own ‘Nessie’ – rumoured to be a relative of the theropod dinosaur family. During the wet season, the lake swells to occupy an area of around 2000sqkm. It has a population of about 5000, scattered in small villages and an extensive shoreline of more than 200km. The June, Boi, Bwe, Kaim and Mamboi Rivers are the primary inflows and the Herbert River is the primary outflow. 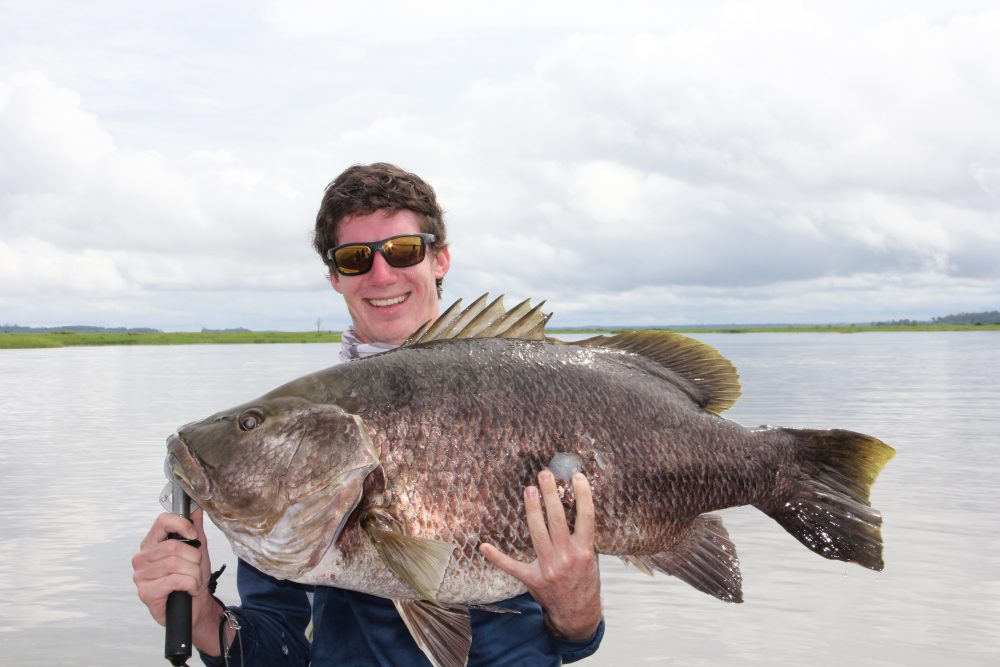 The one-hour flight into Lake Murray was truly spectacular as we flew through the mountains and over the mighty Fly River and landed on a grassy and wet airstrip on a small island in the lake. Local villagers, along with the guides from the lodge, greeted us. After gathering our gear, we jumped into a couple of boats and travelled round to the lodge, which was only 10 minutes away.

The lake was in full flood and surrounded by dense rainforest. We were greeted by the lodge staff and shown to our rooms, overlooking the lake’s edge. The main lodge area, where we gathered for meals each day, had a large veranda also overlooking the lake, providing panoramic views of this truly unique and remote area.

We had a quick lunch and were soon loading our fishing gear onto the boats as we headed out for a quick afternoon fish. There were five fishing guides at the lodge working on a rotation system, with four guiding at any one time. We fished out of 5m custom-built plate punts with two guides in each vessel. They would take turns driving the boat and reading the sounder, letting us know how deep the water was and if there were any fish around. A few species can be found in Lake Murray other than black bass including barramundi, saratoga, catfish and bream.

We travelled up to the northern end of the lake to troll an area around 5-6m deep near a rocky point. Straight away, the boat in front hooked up and landed a nice barra around 75cm.The next troll saw Chris Paice hooking up and landing his first black bass. What an impressive looking fish and at 75cm it certainly was not a small one. Weighing around 9kg, it was a solid fish with large teeth and angry looking eyes. We quickly released it and continued trolling. The other boat landed another barra and their first black bass, which measured 68cm. After another 30 minutes of trolling, the fish shut down, but not before two more nice black bass were landed. 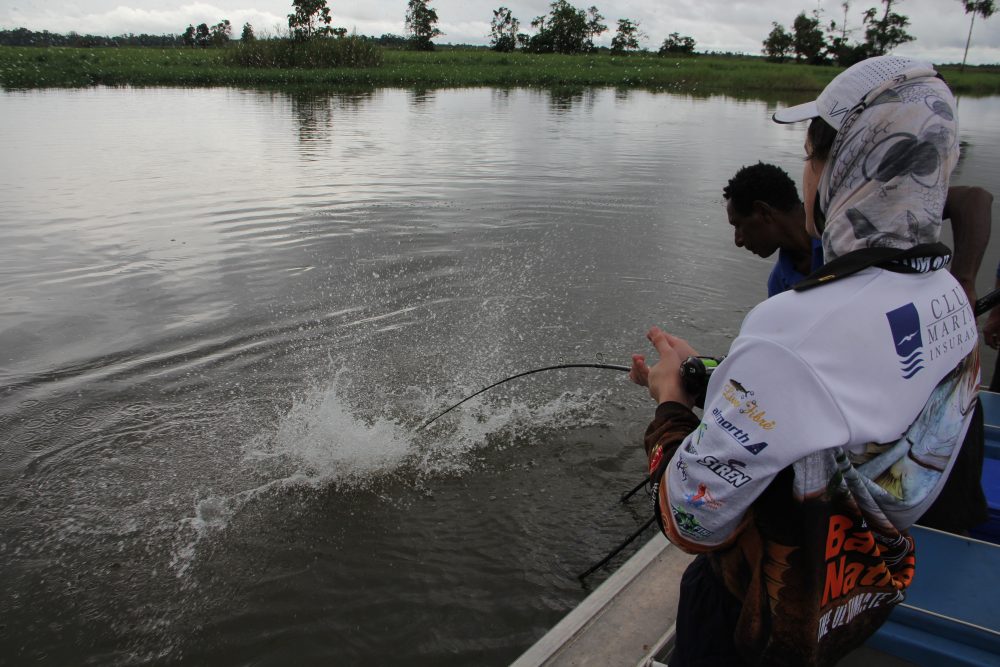 Max hooked up on a solid bass.

The next morning we rose early, excited about the day ahead. The first full day on the water would give us a great opportunity to have a good look around and hopefully land a few more black bass. Each morning we drew from a deck of playing cards to determine who would fish with whom and in which boat. It was a great idea that ultimately had us fishing with a different crew and fishing guides each day. On this first day, I fished with good mate Pete Politis and his son Max. The guides decided to take us to the Vena Vena channel, a small system running off a floodplain into the Herbert River at the southern end of the lake. However, as the lake was so flooded it was difficult to reach this area and we ended up poling the boats through large stretches of floating grass mats just to reach it.

The Vena Vena was pumping beautiful tannin-coloured water into the much dirtier Herbert River and there were plenty of mullet flicking around nervously near the colour change. We started trolling about 50m from the mouth and did not get far before my lure was smashed. Unfortunately, the hooks pulled after the first run, but Pete also hooked up on a good fish that hit like a freight train. He fought the fish well and soon had his first black bass in the boat. At 81cm, it was an impressive beast, weighing 13kg. We quickly released the fish and continued trolling.

It was now lunchtime and I still had not landed a black bass. We travelled up the Herbert River and caught up with the other crew just as they were releasing a monster bass. Chris Paice had landed a 91cm beast weighing around 18kg. It had incredibly thick shoulders and was a magnificent and healthy specimen. The lads said they had landed many good fish in this area, including several more over 80cm, but had dropped just as many. 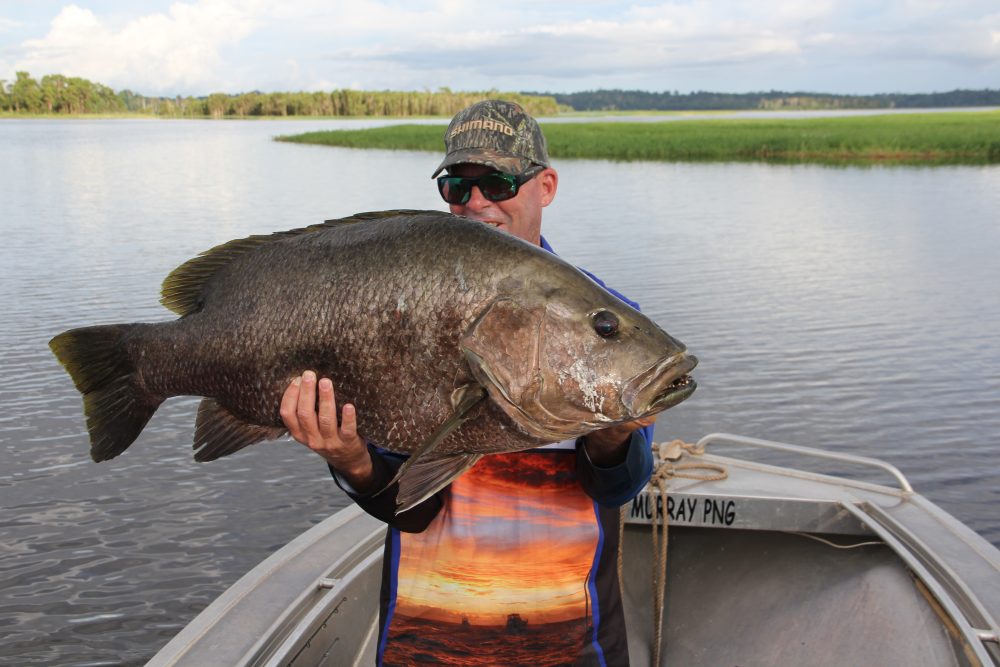 Errity with his 90cm black bass.

As we positioned ourselves and trolled over the same run, Smitty (our guide) was excited, as he saw plenty of big bass marking on the sounder.

Straight away Pete hooked up on a good fish. As Pete’s reel emptied at an astounding rate, Smitty drove the boat into the middle of the river in an attempt to stop the fish running back into the structure. However,

even with 80lb braid and 12kg of locked drag the bass still made it to safety.

While all this mayhem was occurring, my lure was crunched on the wind in and I finally landed my first black bass. At 72cm, it was a solid fish and brought a broad smile to my face. We continued trolling this area, hooking a few other good fish, but they all smoked us into the structure and we came up second best. The sheer raw power of these fish was something to admire.

Later that afternoon, we trolled another area where the Herbert River flows out of Lake Murray.

On the second troll, my lure was absolutely poleaxed by a big fish. The sheer force of the strike almost ripped the rod from my hands.

I had been waiting a long time for this one. It fought hard and deep for what seemed like an eternity before finally rising up to the surface near the boat. It was a monstrous black bass, but it was not ready to submit yet. Every time it neared the boat and saw the landing net it would power off again and it was a few more nervous minutes before it finally succumbed. Smitty expertly netted the behemoth for me and I just sat back in utter amazement as the reality of my catch sunk in. The beautiful bass measured 90cm and weighed 17kg. What a fish and what an amazing experience. 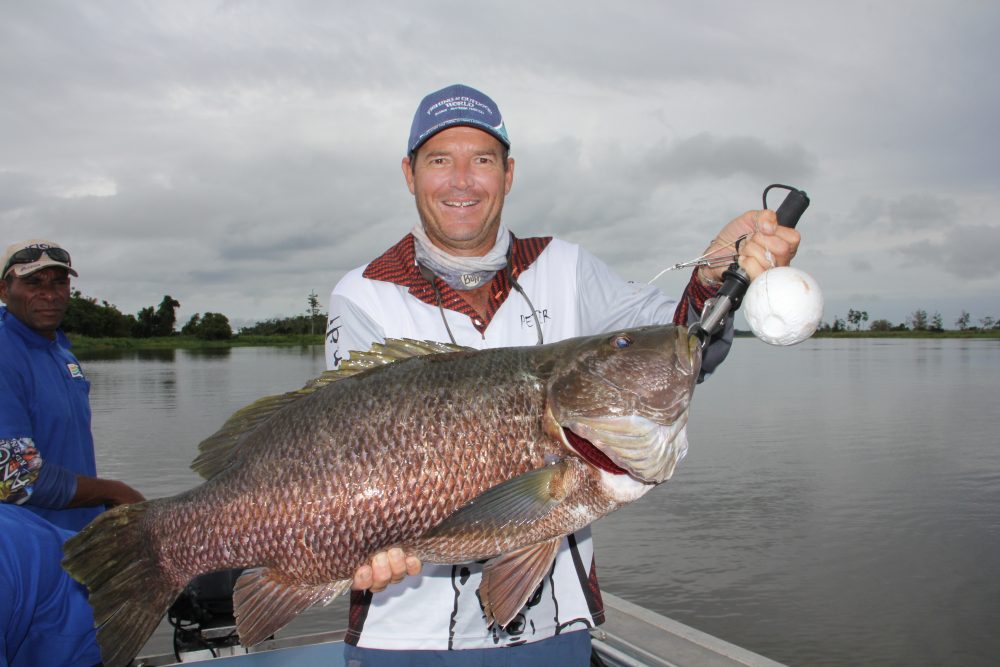 Peter with an 80cm bass.

We returned to the lodge on a high and were greeted by Eddie from the other crew with a grin from ear to ear. Between us, day two had produced the goods with 31 bass landed and more importantly, three over 90cm in length. Could this place possibly get any better?

Day three saw us head straight back to the Herbert River where we had caught the bass the day before.

Within the first minute of trolling, my lure was crunched by a beast of a fish. It tore drag off my Abu Beast reel with no regard for the angler, heading straight for the horizon.

Luckily, there was no significant structure in this area and so I played the fish out until it succumbed to the intense drag pressure. At 81cm, it was a great fish to start the day. We continued trolling with plenty of good fish marking on the sounder and managed to land another ten bass up to 79cm in what proved to be a fruitful morning session. 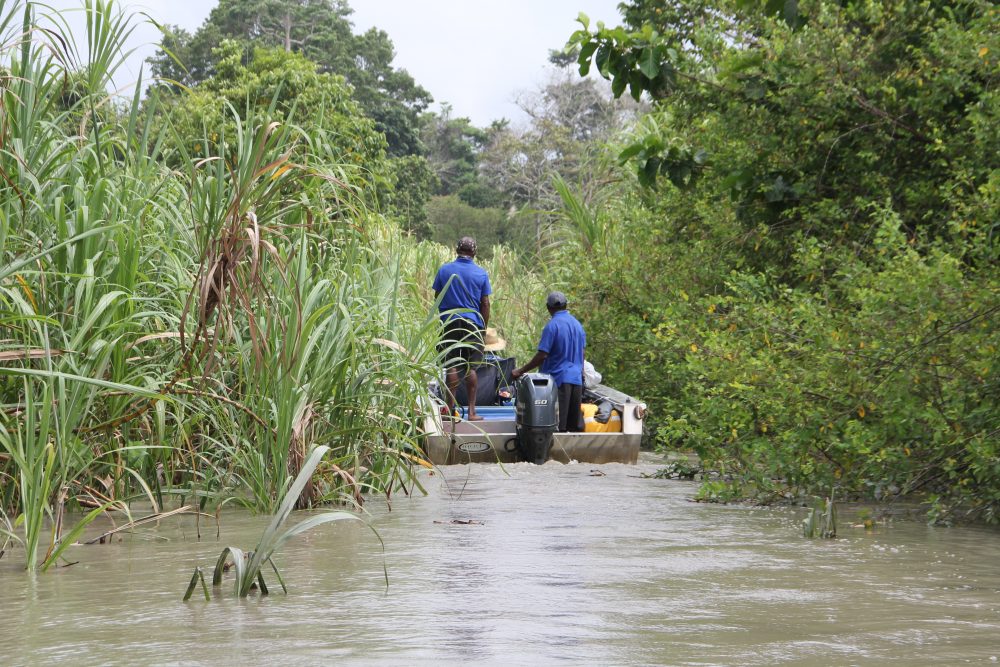 Sometimes you need to bush bash a bit before hitting the fishing grounds.

Later that day we caught up with the other crew who were anchored at the mouth of the Vena Vena. They had managed to land some big bass up to 87cm on the cast. It did not take us long to land a few more quality bass up to 85cm. In fact, the bite was so intense that we quite often had double hook-ups, although most of the time we only managed to land one of them. At the end of the day, we caught up with the young fellas back at the lodge. They were quite coy about their day and Chris had some GoPro footage he wanted us to view.

After dinner, we all sat around the table to view the footage. It was of a double hook-up showing Chris hooked up on a monster barra and his brother Nick, hooked up on a black bass. Chris ended up landing a magnificent 118cm barra (his PB), while Nick landed a 75cm bass. The lads had experienced an amazing day, landing well over 30 bass up to 89cm. The tally for the day between the two boats was 67 bass and one big barra. 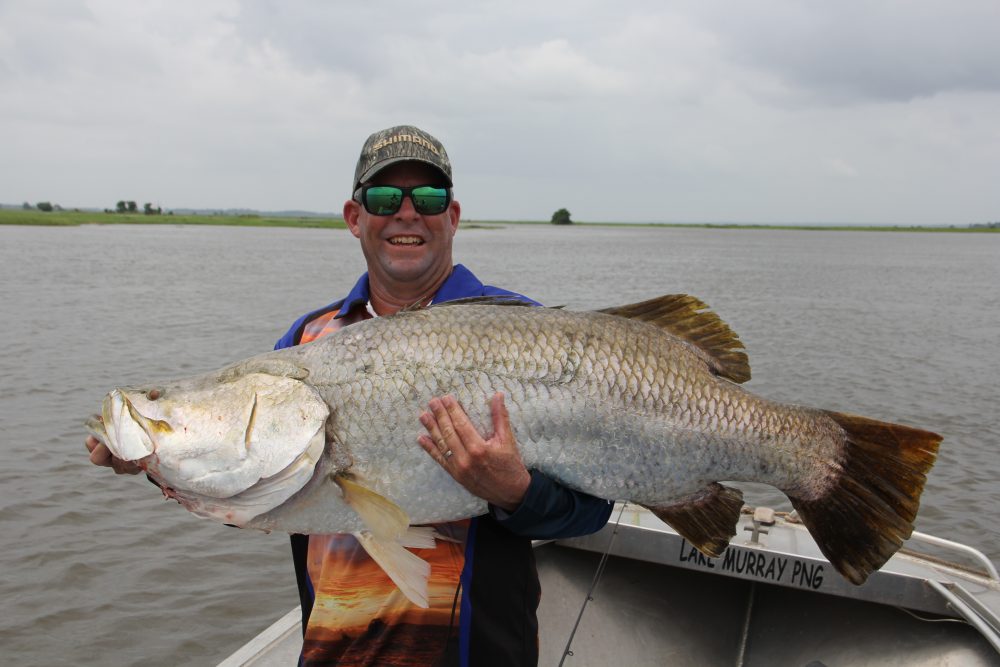 Errity with some serious by-catch – a thumping 124cm barra.

The next day I was partnered with Pete and Eddie for the first time as the old blokes took on the young fellas. Once again, we found some willing bass and had a great session, landing plenty of big bass up to 84cm. We were also being taught a lesson during this session, with plenty of big bass straightening hooks and split rings as we tried to keep them out of the structure, often with little success. Near the end of the session, a massive fish once again inhaled my favourite lure. This time the big fish headed away from the bank and fought hard down deep. I called it for another big bass, but our guide Smitty had other ideas. He called it for a big barra, but I was not convinced as during the fight the fish stayed deep and fought doggedly like a big bass.

Imagine my surprise when a monstrous barra finally surfaced near the boat after a torrid fight. I was utterly gobsmacked and could not believe the size of this massive fish. It took two of us to lift it into the boat in the landing net, weighing well in excess of 30kg and measuring 124cm. This was some serious by-catch.

The afternoon session and last for the trip saw us head back to the Herbert, where we once again caught some great bass up to 85cm. In all, we landed around 30 bass on the last day with a total of 155 for the trip, along with 13 barra and a few catfish. All fish caught were released and every black bass and barramundi were measured (the lodge monitors the sizes of fish caught from visiting anglers).

We had experienced a truly unique and amazing fishing adventure. There was no doubt that we found it difficult to leave and head back to Australia. 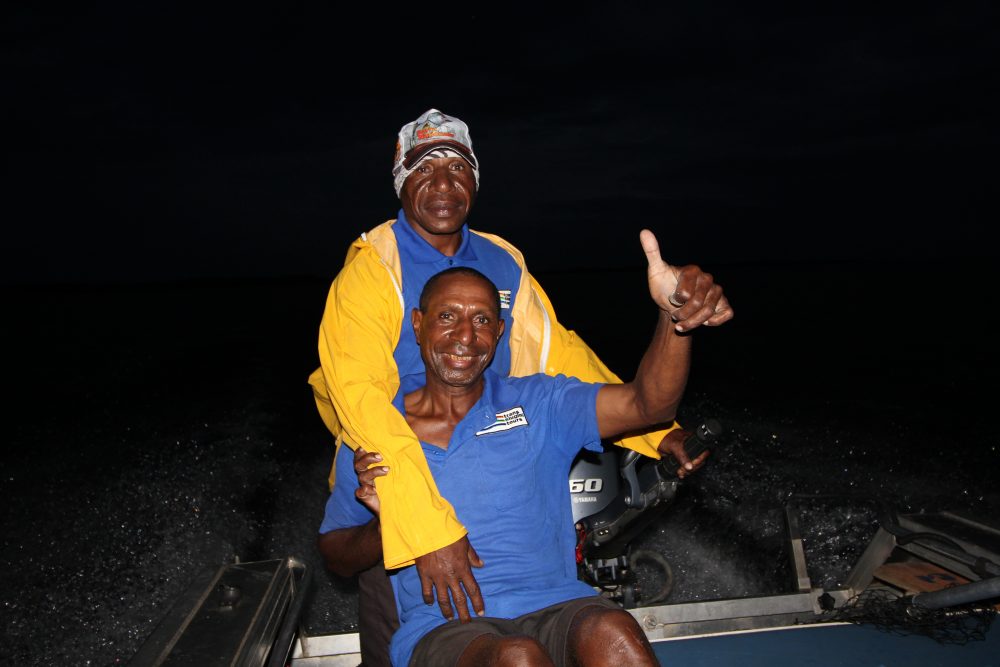 Our guides Smithy and Jamuel were always so happy