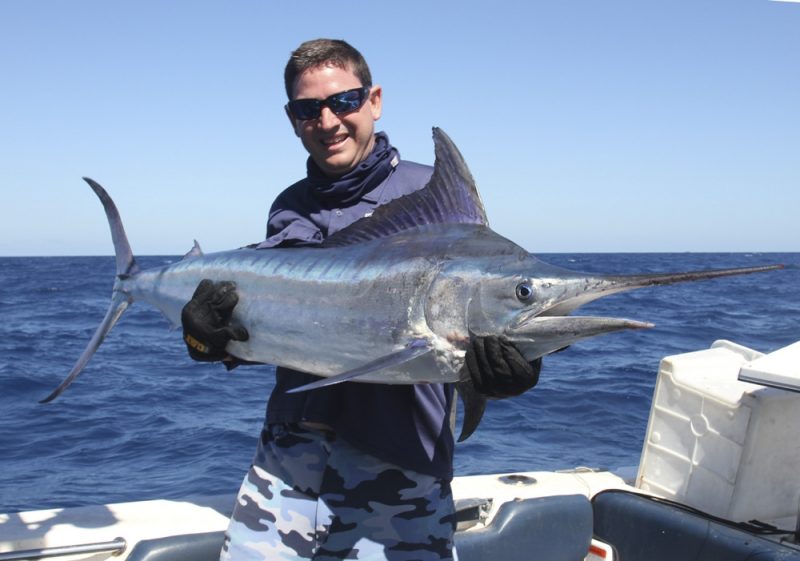 Cairns has always held high appeal to both Australian and overseas anglers. It’s of little wonder as there aren’t many urban areas in the world which can offer such a diverse range of fishing options with such close proximity to the city centre.

The other big plus for anglers wanting to fish Cairns is the ability to target some epic blue water species without the need to travel miles offshore in a big boat. In fact, get the right window of weather and you can be hooked up to big black marlin or bent over with a big red just a few miles from land. When it comes to where this fishing is possible in Cairns, one of the best and most accessible places would have to be from Cape Grafton to the surrounds of Fitzroy Island. Well known by many locals, these grounds offer an amazing array of fishing options and most importantly, are called home to plenty of trophy fish. 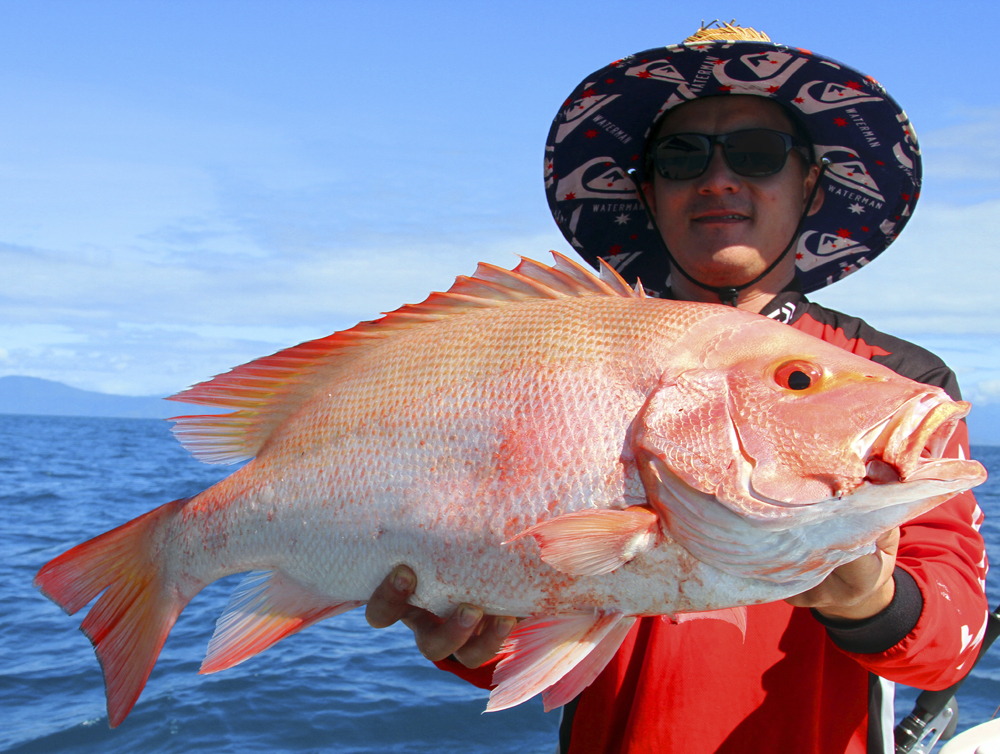 If you are planning on fishing the grounds around Cape Grafton and Fitzroy Island, the Fearnley Street Boat Ramp in the city centre is your best boat launching option. This is a four-lane ramp facility with a double-width 4m wide floating walkway on the upstream side. There is plenty of parking right at the ramp which is also under CCTV surveillance. Most importantly, this is an all tide ramp and provides calm passage through the Cairns Inlet river system which in itself is a world class fishery, and one of three special net free zones on the east coast of Queensland. Once you pass through the Cairns Inlet, you are met with partially smooth waters sheltered by the surrounding towering hills of False Cape and Cape Grafton. 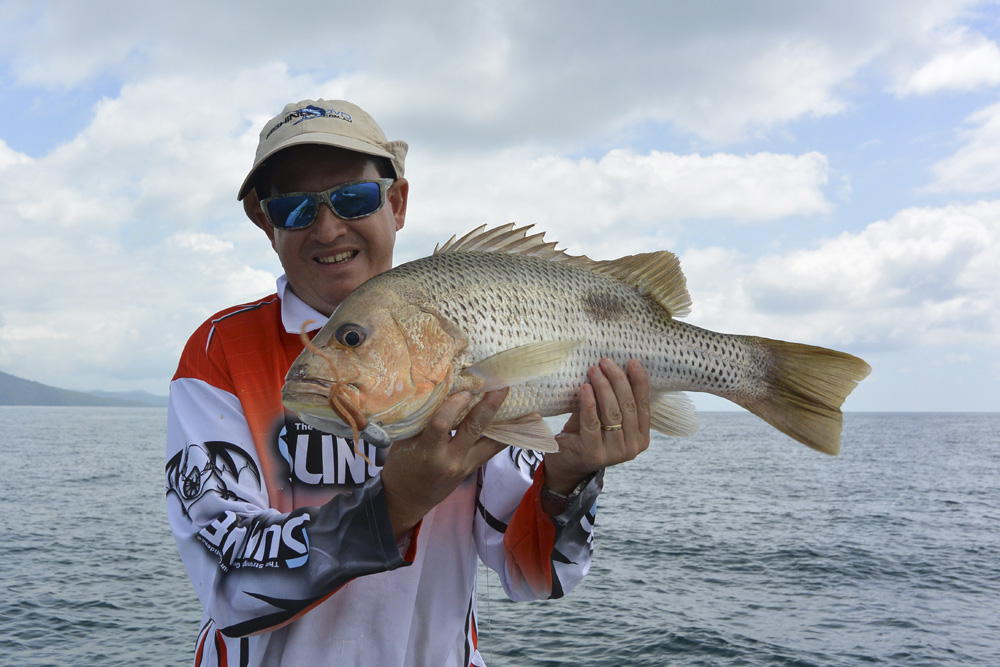 Once you reach open waters, you will see the coastal headland point of Cape Grafton, which is a great starting spot to wet a line. The point of Cape Grafton located at S 16.51.595 E 145 55 344 is a large rocky current swept point which creates an area of tidal pressure. When the tide begins to push around this headland it condenses bait and attracts a range of predatory pelagic species such as Queenfish, giant trevally and mackerel. Targeting this high current area and current lines with stick baits, poppers, and high speed retrieved metal slices will quickly see some rod bending action. If top water action is not working here, some vertical high speed metal jigging or dropping big soft plastics is also a good option, especially if you can find the bait schools and fish on the sounder. 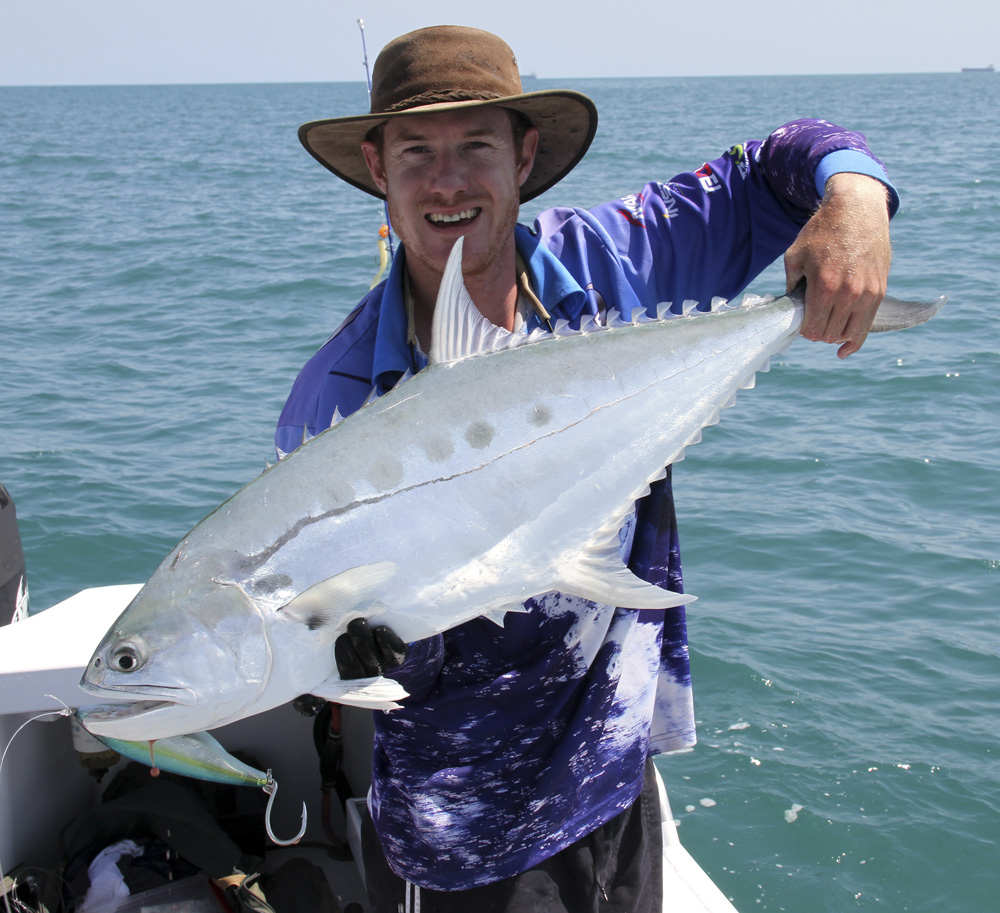 From this spot you can follow the rocky headlands south and begin fishing the rocky headlands and smaller points of the Cape Grafton coast, targeting the coastal fringing reef and rocks which are found in abundance in this area. Casting large shallow diving hard body lures and paddle tail soft plastics into these areas will bring all manner of fish species to the boat. Whilst there are plenty of pelagic fish cruising these waters, it’s the bottom dwelling reefies which make it a great spot to fish. Large underwater caves and bombies litter this area and are home to some very large coastal mangrove jacks, bar cheek coral trout and golden snapper, not to mention some very large barramundi. It’s best to set a strong drag and fish quality fluorocarbon leader such as Sunline FC100, as these fish will bury you if given half a chance. Due to the coastal location, you can find some very large adult sized jacks pushing well above the 50cm mark along these headlands, and this is very much a trophy fish location. Golden snapper are the same and when you find one, you tend to get a couple more follow, thanks to their schooling nature. Spend enough time along these headlands and you will quickly learn where the pockets of fish and caves are found. One species which you will also find along these coastal fringes are Maori cod. These fish are not the easiest to find and if you want to tick one off your bucket list this is the place to do it. It is possible to spear these waters when its clear, and there are some thumping bar cheek trout in this location, however be croc wise as they do frequent this area.
Calm waters around these rocks and headlands and sheltered bays such as Turtle Bay S 16.53.349 E 145 56 970 will also hold schools of squid which can be captured using small to medium squid jigs. The trick is to find the really calm water and presence of small bait like hardy heads or herring which move in with the tide. 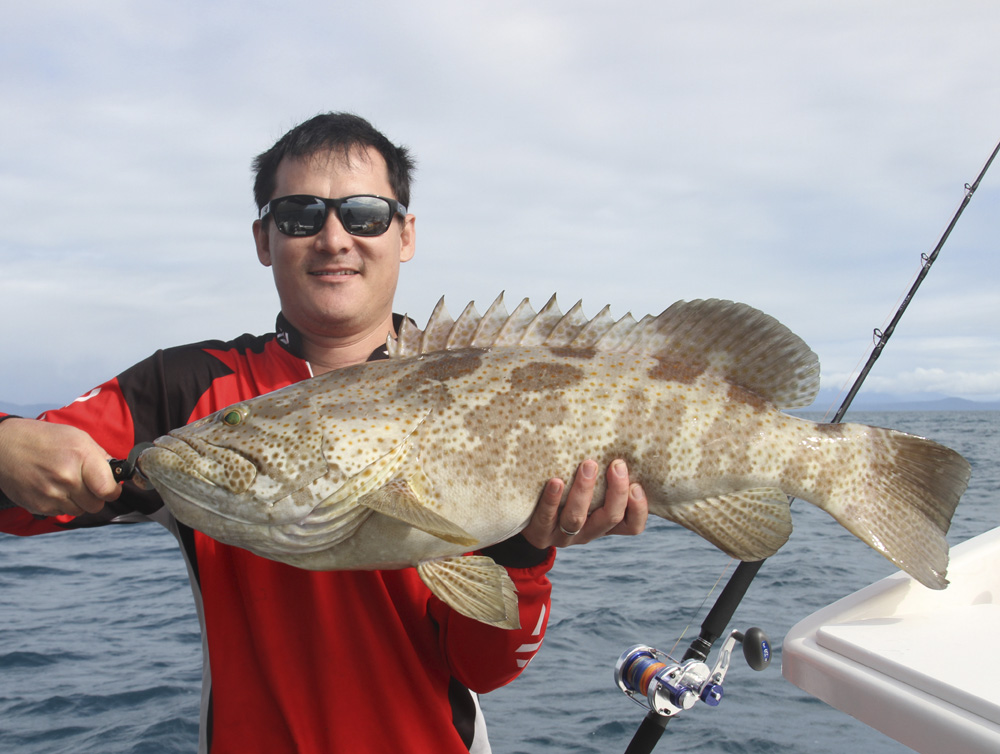 Following the headland south along the coast you will soon find yourself in the passage between the mainland and Fitzroy Island. This area is in exposed waters and can see a fair bit of weather and swell, so take care when fishing this spot. From the mainland side, this channel drops away quite steeply into 20 plus metres of water which is littered with isolated rocks and bombies. This area is known as Kings Point S16 56.294 E 145 56.346 it is well known by locals to be a prime location for big golden snapper and black Jew, especially during the summer months when the squid and bait turns up in this area. It’s a good idea to position the boat in around the 40 feet mark where the structure is more isolated and drift along twitching soft plastics like 7inch jerk shads, Squid Vicious and even smaller soft plastics like the 4inch shrimp patterns. When you find likely looking structure with bait and fish showing, this is when you should spot lock your electric or anchor. This is also a top spot to fish at night especially if you can catch live squid. The Kings Point area is also a very good spot for Spanish mackerel, especially in the cooler months, and trolling large hard body lures and rigged baits like wolf herring is a top idea. Being a coastal location. it tends to hold much larger female Spanish mackerel as well. Be aware that the headland further south of here eventually becomes a green zone, so check your zoning maps before visiting this area. 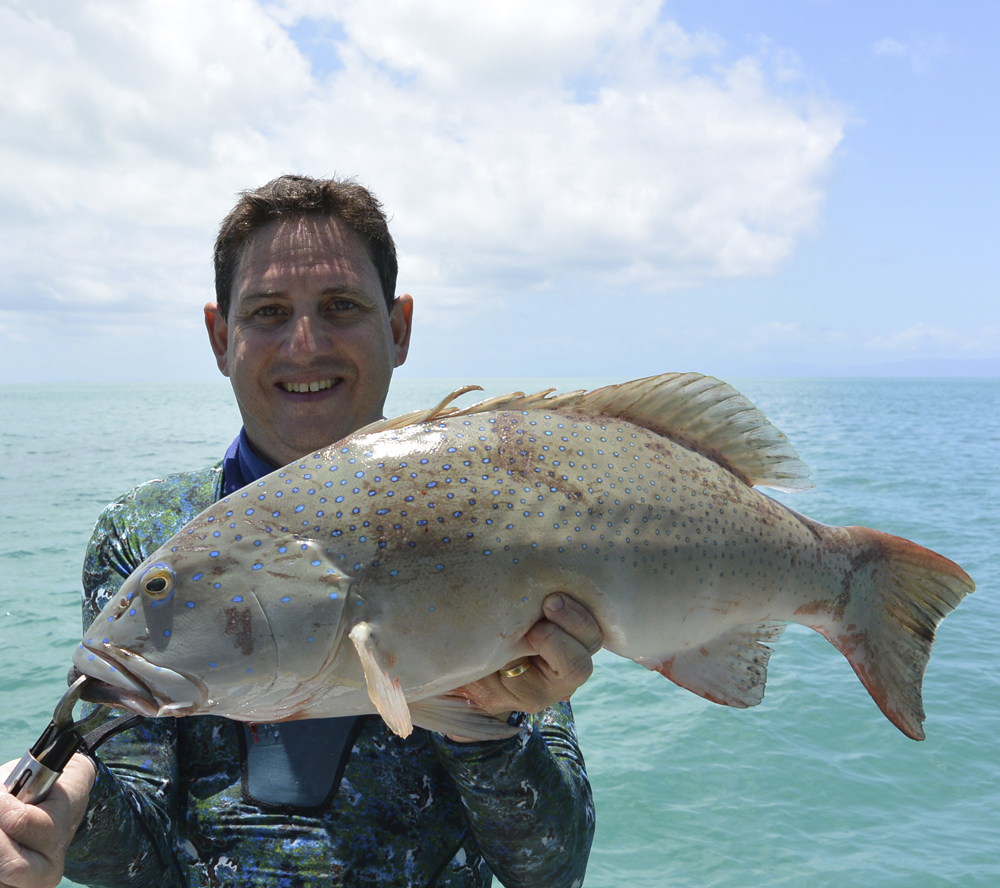 Your next stop around this awesome area is a quick duck across the passage to Fitzroy Island. Not only is this a top spot to fish, but the island is open to day trippers with plenty of moorings, beach front bars and restaurants and one of the most amazing beaches, (Nudie Beach- no nudes – just named after nudibranchs) you will ever see. Be aware and check your zoning maps as the mainland side of the island, whilst a yellow zone is designated a public appreciation area, which means no fishing or spearfishing allowed. However, the back ocean facing side is open as a yellow zone and offers some excellent mackerel trolling and bottom fishing options for anglers, especially for common trout. This area is also great for a quick spearfish with plenty of big bar cheek trout and cray fish on the isolated bombies.
Just off Fitzroy Island lies the Fitzroy Island Wreck S16 57.554E146 03.788 which is also a top spot to fish, especially if you can get there early in the morning or late in the afternoon, as this is when it fishes the best. This spot can hold coral trout, large and small mouth nannygai, golden snapper, rod bending golden trevally and some very big cod. It tends to shut down a bit during the day, but if you have live baits and soft plastics it fishes extremely well. If you have the time, searching ground between this mark and Green Island will also find some awesome wonky holes as well, but you will have to find these little red gold mines yourself. 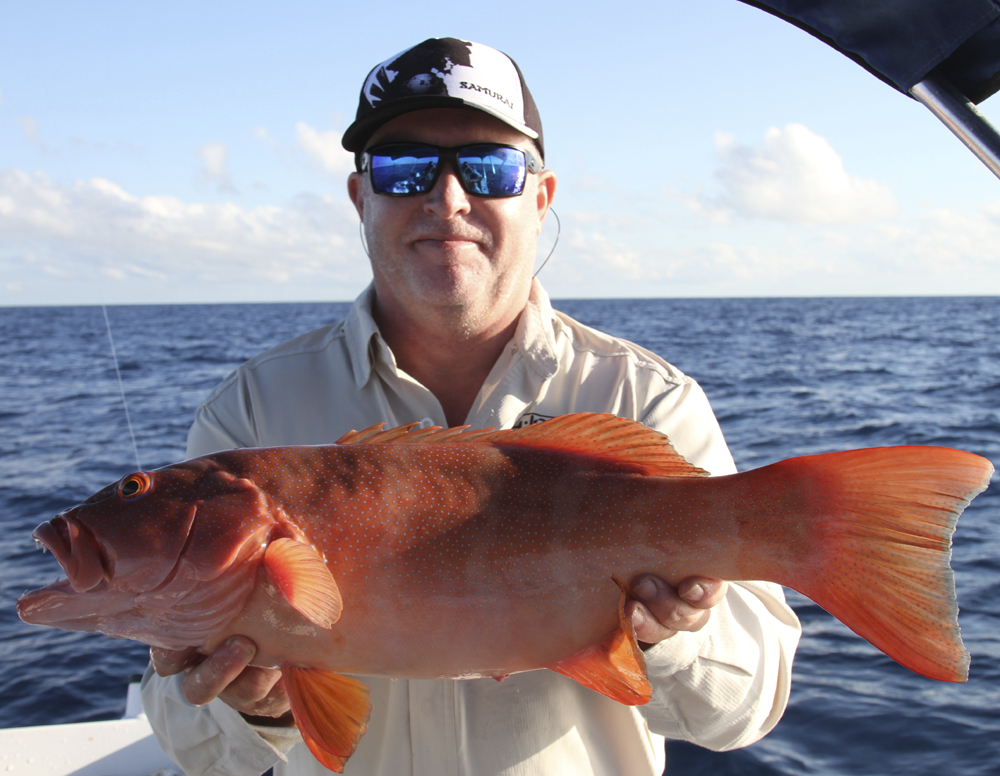 Finally, comes the icing on the cake and if you can find yourself out around this area from July through to September, you are in the hunt for one of Cairns most iconic and world-famous fish species – the Black Marlin. The area around Fitzroy Island is well known as a juvenile black marlin hot spot, but don’t let the word juvenile put you off as these fish can be found to 40kg plus in this area. More commonly found between 10 and 20kg, these are awesome sport fish to target out of a small boat. They will readily take skipping and swimming gar, hard body lures and small pushers, however having liveys in the tank which you can feed back to fish swimming in the spread is the best option.
One of the best places to begin your marlin troll is what’s commonly referred to as the Marlin Fingers located at
S16 51.899s E146 4.742 you will understand why they are called this when you see the behaviour of the bathymetric lines on your GPS in this spot. These lines are a good trail to follow either north or south when chasing these beaked beauties.
The Cairns region, in particular the grounds from Cape Grafton to Fitzroy Island, offer plenty to both the local and travelling fishes. When conditions are right, it can open up plenty of opportunities to crack a new species or a trophy fish. So get up here and experience one of Queensland’s best. 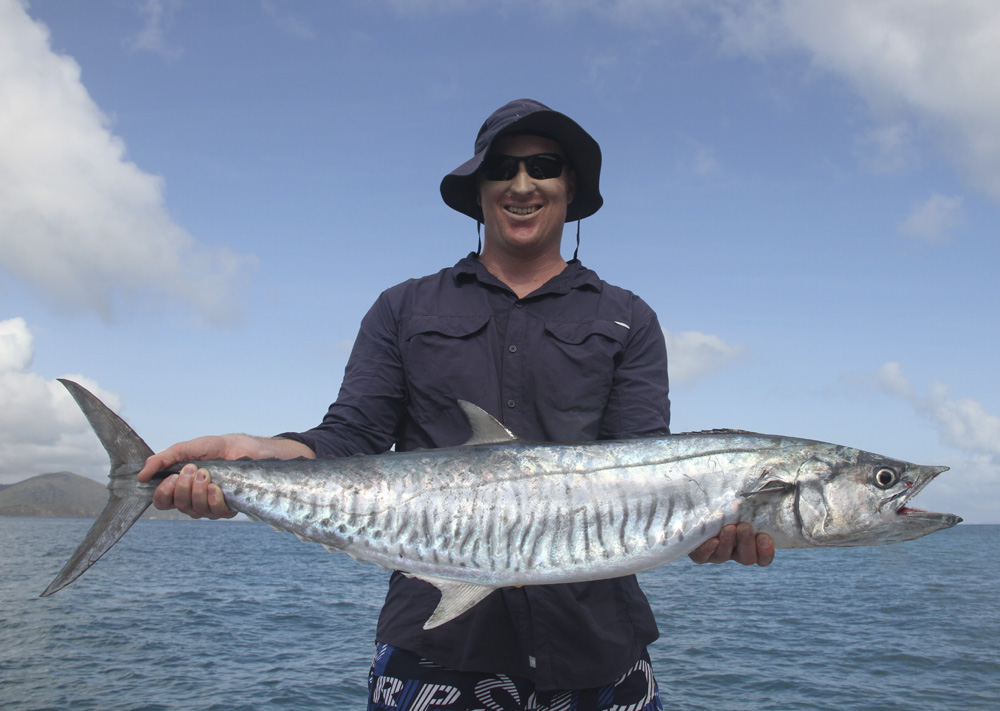