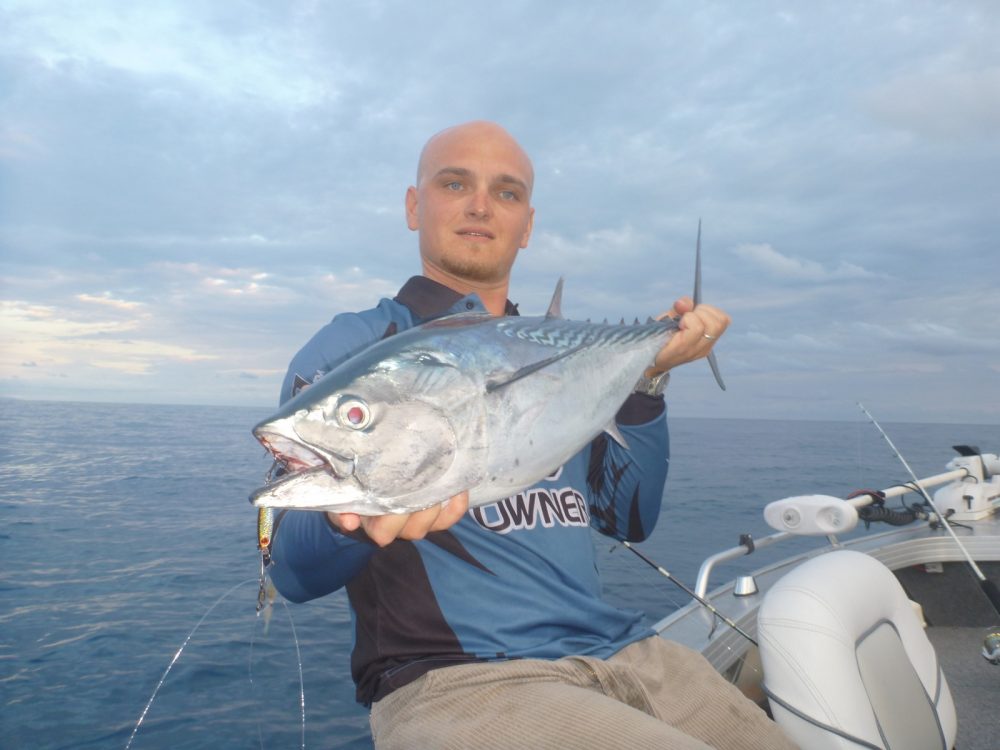 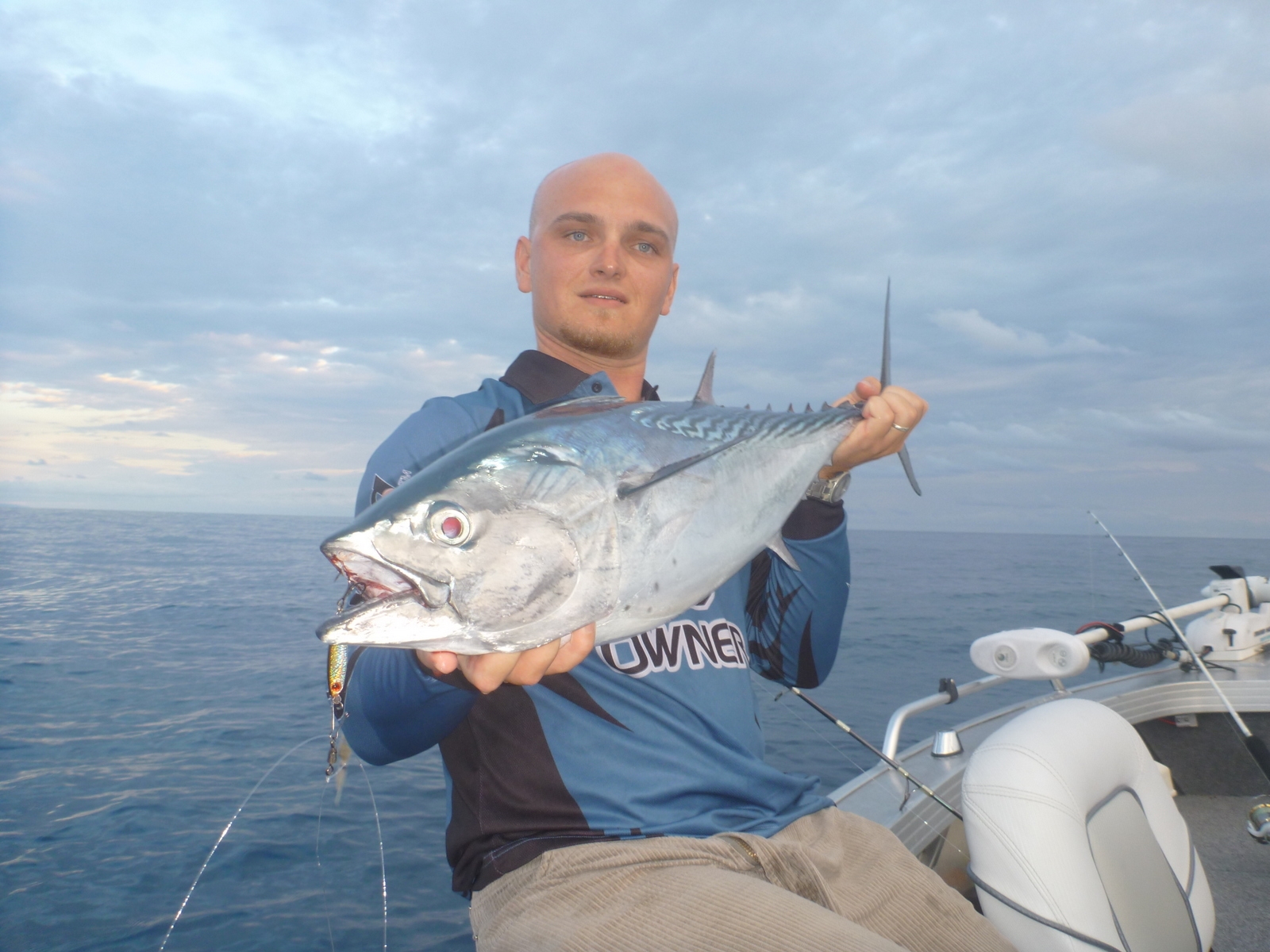 Tuna are a prolific species in Queensland and it’s hard to head out for a fishing trip to the shoals or reef without passing by schools of either long tail tuna or mack tuna. In years gone by we’d generally drive straight past them, with an occasional exception. I recall almost nine years ago on one of my first reef trips out from Townsville we stopped by a feeding school of long tail tuna and I cast an old rusty metal slug into the mix and rapidly cranked my old Shimano TSS4 high speed spinning reel as fast as I could.

The slug was soon intercepted by a fooled long tail and I got my first display of the awesome fighting abilities of these bullet-like speedsters. With the understanding of the table quality these fish have, I quickly bled this fish and slipped it into the icy brine. It was a tough job keeping the rest of the fishing crew’s hands from knocking the slabs off the tuna for bait while we were fishing for reds, but I was eager to try a tuna stake on the BBQ grill. The wait really wasn’t worth it, and I soon doubted all the hype that I’d heard about fresh tuna. My wife and I tried it grilled, crumbed, fried and even fish cakes before the remainder of the fillets were moved into the bait freezer.

From this first encounter, I soon lost interest in chasing tuna for the table and left them in the bait fish category due to their rich oily flesh with firm skin which holds onto the hooks very well. A large fillet of tuna wafting in a red emperor’s territory emits an oily berley trail and has been the undoing of so many prized reef fish for me and many other offshore fishermen.

Tuna also make an ideal sport fish. They are built for speed and this is evident in their hydrodynamic design which aids their incredible explosive runs. When they begin to tire, they start circling side-on to the current, usually staying down deep. When the fish is eventually subdued and circles beside the boat, they are easy to grab by the tail. This make them easy to handle and they release very well if not battled to complete exhaustion on ultra-light gear. Over the past 12 months I’ve had an absolute blast chasing tuna as a standalone sport fish everywhere from West Point, Middle Reef and Halifax Bay all the way out to the shoals, offshore wrecks and reefs such as Keeper, Bramble and Britomart. Targeting these surface feeding tuna is a highly visual style of fishing with equally eye catching strikes.

To target these fish, you don’t need gear that will break the bank either. They are suckers for high speed slugs, soft plastics, stick baits, featherhead jigs, poppers and will even take a painted sinker and hook. If you can get within casting distance of a school of feeding tuna with any of the above tied onto a good spinning outfit with a smooth drag, you’ll be in with a good chance. In my experience, the key to success is choosing a lure that matches the size of the bait they are feeding on and trying to get the boat close enough to the feeding fish. Tuna are often easily spooked and head down deep when you approach them by boat. This can be extremely frustrating, yet I have found they usually feed into the wind, and if you can position your boat in front of the feeding school with your engine switched off, it will put you in with a better chance of getting into a tug of war with one of these speedsters.

Bob and I were recently scouting around for some new ground out the back of Magnetic Island when a school of tuna stared boiling on the surface through a helpless bait school. I manoeuvred the boat while Bob launched a cast deep into the school and was instantly hooked up to a good mack tuna. The first run tore 150yds of 20lb braid off in seconds. As the backing line headed out through the guides, we decided it was time to put up a chase. Half an hour later I tailed the fish and lifted it onboard ready for a quick photo. Bob decided he was going to keep this fish and ‘can it’. I had a fair laugh, as I recalled my experience with eating a long tail tuna, which is generally considered much more of a table quality fish than a mack tuna. Bob wasn’t fazed and happily bled the 7kg tuna and slipped it into an icy brine.

I didn’t think any more about it until a few weeks later at a BBQ where Bob brought out some tuna on crackers. Not thinking too much about it, I tried some and was quite impressed, even more so when he told me this was the tuna he preserved from a few weeks earlier. It was the best tasting tuna that I’ve tried and it changed my opinion on this ‘bait fish’. 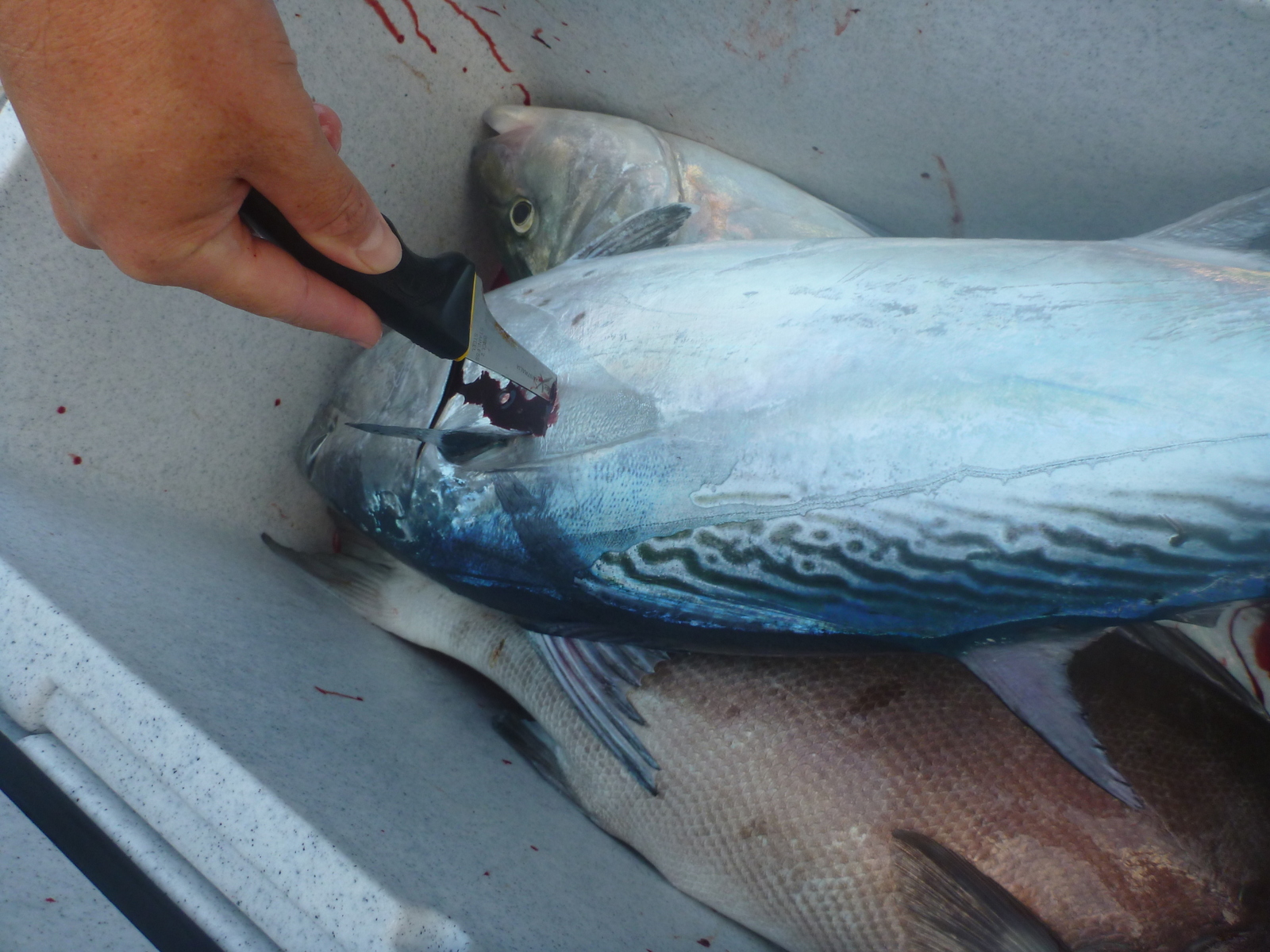 Needless to say, the very next tuna that I boated was destined to be preserved and bottled. I watched a TV program and they        demonstrated the best technique to bleed a tuna for table quality is to slide a knife in behind the pectoral fin which pumps most of the blood out very quickly. I also chose to brain spike the fish to kill it instantly before sliding the mack tuna into a salt water icy brine to ensure the meat was in prime condition.

What follows is the process I used. I encourage you to give it a go as it ended up delicious (I held off writing this article until I did the taste test to be sure.) 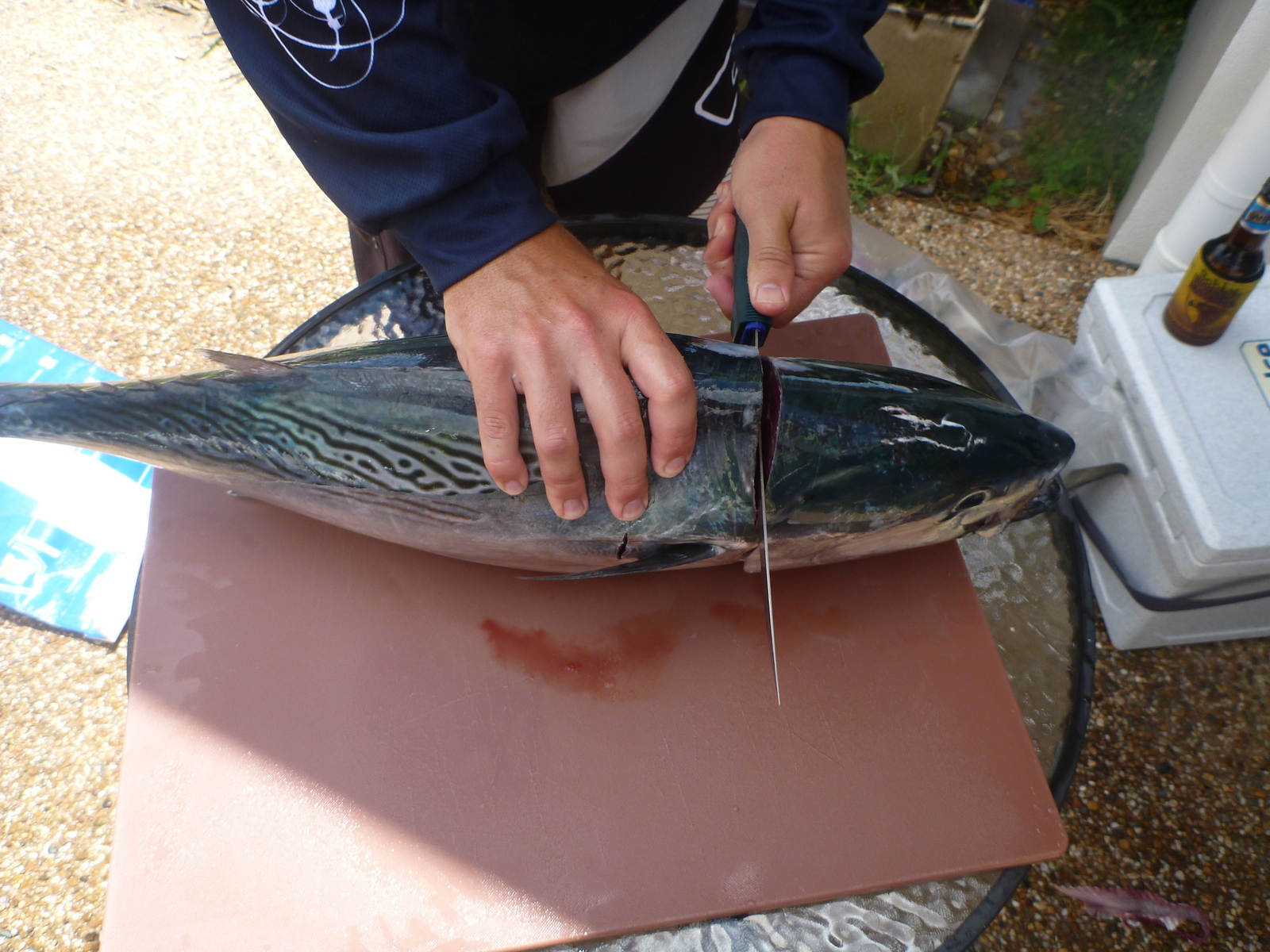 Remove the head, stomach and tail of the tuna then cut into chunks ready to be boiled in a stock pot