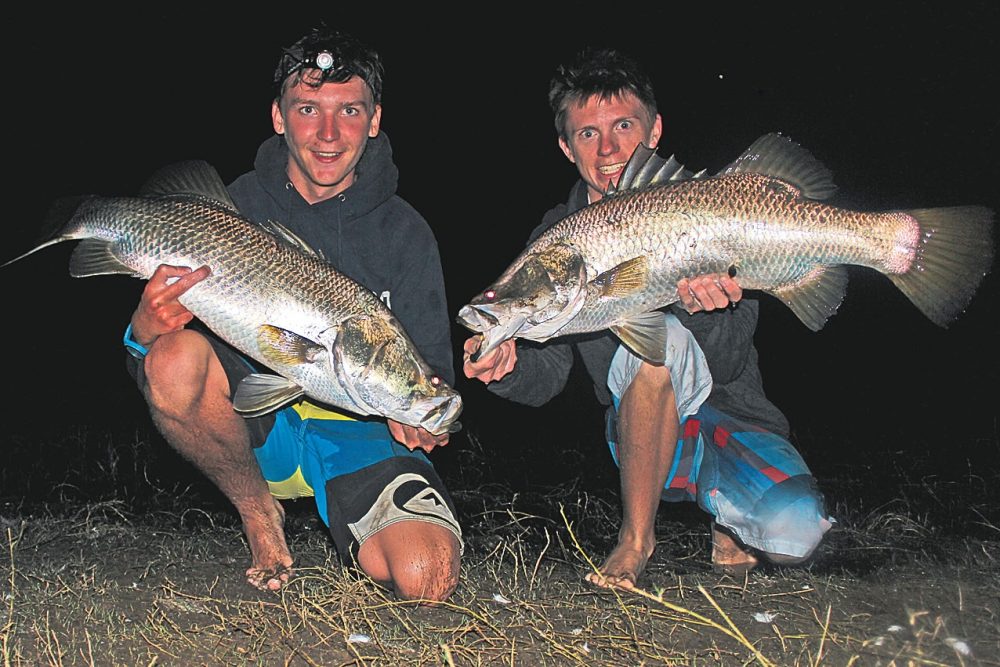 Lake Tinaroo, situated on the Atherton tablelands has been known as “the lake of a thousand cast” for as long as I can remember. However, in the last few years big barra from this pristine part of the world are becoming more common,

with people finetuning their techniques and spending more time on the water targeting them. Fish are caught doing many different things, like live baiting, casting and trolling, and anglers catch fish from both boat and bank. Lately, fishing from a kayak at Tinaroo is becoming very popular, as it is in many impoundments. Apart from hand casting in the shallows on a hot summer’s night, it is definitely my favourite way to catch them.

Over the past couple of years I have discovered that I’m obsessed with fishing. Whether it’s for barra or JPs, it’s all better than school. As a grade 12 student about to graduate, you would think I study every night. Well, that’s not entirely the case…  Why study when you can fish?

About a week before the last full moon the weather was perfect and reports from the lake were of plenty of barra. So I organised with good mate Declan Williams on the Monday that we needed to get in on the action as well. He had a few days off, so he was keen. For me, it was a school week, but luckily I have lenient teachers and parents that support what I do.
The following day I jumped in the car and left school at 2pm in pursuit of a big Tinaroo barra. We met at my house and loaded the yaks on his ute, tied up some gear and discussed the plan for the trip. After a bit over an hour’s drive we had arrived at the lake and conditions looked perfect with no wind and plenty of sunshine. It looked like we were in for a good session.
As we paddled out to the area we had selected to fish, we noticed on the sounders that the water temp was up about 3 degrees from previous weeks. At some spots we found water up to almost 24 degrees. Water temp like this in winter means one thing – barra biting! For this particular afternoon and night we decided to troll soft plastics behind our kayaks and hopefully get a bite. On the first few passes of the selected area in about 10ft of water we sounded at least 30 barra and we were getting very soft bites every time we passed over the school. This became very annoying after half an hour had past and there was still no hook up. We needed something to trigger a solid strike…
We played the hit and miss game with this same school for a while and were started to talk about how they might just be small fish and it could be worth moving. The sun started to set over the hills and the wildlife started to come alive, and so did the barra. I scanned a solid single fish on my Lowrance Elite 4x DSI and about three seconds later I got smashed!
My Shimano Calcutta 200B and T-curve were under full load with this fish launching itself clear of the water and heading straight to the sticks. Dec’ and I both called it for a decent fish, as it was towing me and the kayak around at a rate of knots into the structure. Only using 20lb Power Pro, I was very lucky after the first few powerful runs that it swam clear of the structure and I could stay on top of it. Landing these barra in kayaks can sometimes be challenging as they tend to like jumping less than a metre away from you… And that’s exactly what this one did! The adrenaline always gets going when you’re sitting water level with a 20kg+ fish that wants to jump into your lap.

Finally, after some close calls with locked drag, I managed to get her on the lip grips and paddle to the bank for a few quick shots and a very healthy release.
I quickly retied my chaffed 80lb Black Magic leader to my 6’ Zman SwimmerZ and got back out there hoping that they were starting to bite.

It didn’t take long at all, I trolled for about ten metres over the same school of barra and was on again. This fish was a lot smaller but still managed to almost snap my rod and wrap me around multiple trees. I put my Chronarch in freespool and paddled around the trees where it was and, amazingly, I got it out. Who would have thought a 100cm impoundment barra could pull so hard! “Impoundment barra don’t fight!” What a joke that statement is! An impoundment barra will pull just as hard as any barra will. Some days, yes, there are the lazy ones, but 75% of the time I reckon they pull just as hard as a salty, especially the fish between 90-110cm.
After releasing this fish the next hour turned into a blur of nonstop action, with Declan and I landing another six barra between us and dropping just as many. One battle that stood out in all this mayhem was a double hook-up; we were paddling side by side in about 8-12ft of water and our sounders lit up once again from a school of barra. I hooked up moments after we sounded over the school and then Declan joked, “Wouldn’t it be funny if I got a fish too!”

Sure enough, he paddled on for about two metres and was on as well. Both fish weren’t huge by impoundment standards, only about 85cm, but were great fun in the structure. This goes to show that all sizes of barra will sit in a school and often all feed at once.
By 7:30pm we had landed eight barra and the school had started to disperse, so we went back to the car and ate some cheap Tuesday KFC to re-energise before going in search of some more fish. We proceeded to paddle a few more known spots, but there wasn’t much bait around and, as a result, there were no fish nearby. The water temp had dropped down by two degrees in some places, so at 9pm we called it a night and started the journey back to Cairns.

The Kayaks Declan and I both use are Malibu Sierra 10’s. These Kayaks are awesome for big barra fishing and are very stable and quiet in the water. There are many kayaks on the market and they all do the same job, but I like the sit-in style, because it’s much warmer in winter and it’s easy to access all the fishing accessories. I’ve rigged my Kayak with two rod holders in front of me for trolling and a Lowrance Elite 4x DSI sounder. My biggest tip for kayak trolling for barra is that if you put in the time travelling the banks at a slow, relaxing paddle, you will eventually hook up. Some nights we put in four hours paddling before finding fish.

Weapons of choice
The rods I used for this session were Shimano T-curve Revolution Inshore rods. These rods are perfect in the kayak because they are soft and can easily be manoeuvred at close quarters with minimal chance of snapping. One of the reels I use for trolling is a Shimano Calcutta 200B loaded with 20lb Power Pro. This reel has a solid, smooth drag and is perfect for kayak trolling around heavy timber. The other is a Shimano Chronarch 200E6, also loaded with 20lb and also packing a super smooth drag. The Chronarch is also my go-to reel for casting lures on the lake and in the salt in summer. We used Zman soft plastics between 6’ and 9’ on this particular night and they seemed to eat any colour, but on a full moon my usual favourite is a dark green plastic.

The winter bite
There are always people that say barra don’t bite in winter, but that’s not really true at all. A barra will always feed; it’s just that in winter their feeding patterns change. Lately we have been finding the barra sitting on ledges that are adjacent to structure and normally where you find one this time of year, you will find a few. It’s just a matter of putting in the time searching in the cold. The area we fished was a ledge starting at about 8ft dropping to 20ft. The school seemed to be sitting along the whole thing, but preferred the top lip of it. The fish Declan and I caught weren’t anywhere near as big as some of the other Tinaroo fisherman have been reporting, but were a lot of fun for a school night – beats studying, that’s for sure.
When the wind is blowing and offshore options are limited, go and fish your local barra impoundment. The barra are biting, especially at Tinaroo. It may take hours – maybe even a few trips – to get that bite, but when you do, it will be worth it. More than likely if you get one you will get a fair few. Pack a warm jumper and get out there. The barra won’t bite in the lounge room!