A month of crazy captures 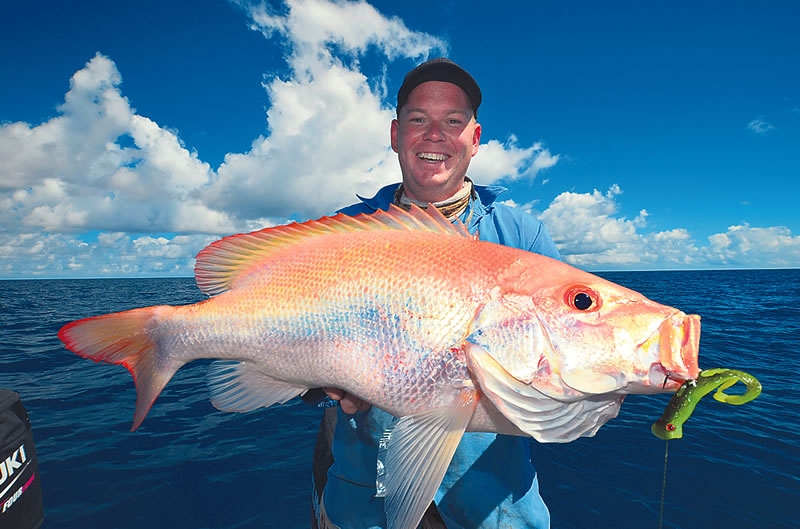 The ed’ describes several captures this month that certainly left him a little gobsmacked.  You’ll never guess what latched onto a 2″ Atomic Prong, a Halco Twisty and a Zman Pop FrogZ!

I’ve actually managed to get out on the water a lot this month, which was a really nice change for me.  It all started with the arrival of my new tinnie, a 3.9m Hornet with bowmount Minn Kota and 25 Yammy.

Good mate and gun light-line fisho Sam McCowan and I decided to run around to a little estuary to the north of Mackay.  The idea was to make the most of the boat’s shallow draft to sneak in at low tide and fish the first of the run in for grunter.

We found a nice little hole that had a rubble ridge at its edge and decided to concentrate our assault there.  The water temperature was all of 19 degrees, so grunter were the species on the target list.  Armed with 2-4kg graphite flick sticks, 5lb braid and Shimano 1000 Stradics we began to pepper the area with a mix of Atomic Prongs, Berkley Minnows and some 2″ Yum plastics.  It didn’t take long for a steady stream of small grunter and bream to make their way aboard, but as the tide started moving in with a bit more pace, Sam suddenly let out a call of “I’m on” as a splash appeared near the rubble edge.  The fish had taken a 2″ Atomic Prong on the drop and judging by the speed of which it charged across our bow we were both calling it for a trevally until a solid barra got its shoulders out of the water and left us with jaws on gunwale.

Sam played the fish out very gingerly and eventually I netted a nice 61cm strikingly silver barra.  Then, to prove that a barra on a tiny bream lure was no fluke, about ten minutes later he spotted a show of bait on the sounder and freespooled the Prong down right beside the boat.  He let it hit bottom and went to lift it only for the little rod to load up in a big way.  Suddenly we had a second barra barnstorming its way across the surface and it was clearly a larger fish!  Once again Sam took his time and, to his credit, landed a nice 67cm barra.  If that doesn’t prove the cold water “jelly bean theory”, nothing does!  In fact, interestingly, I was using a 3″ Prong and never got a touch from a decent fish.  Also worth noting was that the whole time we were fishing there were tiny jelly prawns being showered and chased on the shallows nearby… Coincidence?  I think not!

The next amazing capture was on the Sunday of the Mackay Spanish Mackerel Shootout.  I was out with Reefari Charters on the Cougar Cat Raptor II and, to be honest, we had had a slow weekend.  The Spanish had been few and far between and we’d decided to resort to jigging and bottom bashing.  Now, I love early morning jigging assaults, especially for fingermark, so when we spotted a nice show of fish on a pronounced rocky rise, I was quietly confident.  Sam and I dropped soft plastics down and I hooked-up almost immediately which encouraged Greg to drop down the only other outfit that was “rigged to jig”.  However, it just so happened to be the same 5lb combo Sam had used to land the two barra just days previously.  It was rigged with a little Halco Twisty metal slice that fluttered down into the depths just as my fish was revealed as a disappointing bludger trevally.  Meanwhile though, Sam was hooked-up and the fight didn’t look like a trevally, so there was still hope.  And guess what?  Yep, the 5lb combo – which we dubbed the “Kinder Surprise Combo” because it looked like a toy in comparison to the other jig sticks – was loaded up.  Something had smashed the Twisty!  By this stage Sam had colour and gave a whoop as his first ever fingermark on a jig came into view.  Greg, being the YouTube addict that he is, handed the Kinder Surprise Combo to Reefari regular Jason Horton while he grabbed the camera.  Horto’ kept plugging away, making two metres for every metre lost, and eventually he too had colour – another fingermark at over 60cm.  I know guys like NT jigging master Peter Zeroni catch a lot of “golden snapper” on metals, but this was the first I’d seen.  Chalk that up as weird and wonderful capture number two.

(Note: to watch Greg’s footage, check it out at http://youtu.be/PH9xovRARHI)

Amazingly, we have actually had multiple glassed out weekends this month, so a fortnight after the Spanish Shootout I was back on Reefari headed wide in search of big red fish this time.  And we found them, in numbers!

After several big reds and nannygai each, we decided that we’d introduce the “no bait rule”. The no bait rule meant everyone had you use jigs and, as a bonus, we had two blokes on board who had never caught fish on jigs, ever. I rigged one of these jigging newbies, Yohan, up with a four ounce TT Jighead and seven inch Atomic Jerk Minnow and the other, Matt, up with a Berkley Grub, also on a four ounce. At the back of the boat, Sam McCowan and I both had octo jigs and the Old Man went for a Reidy’s Knife Jig. The results were as chaotic as a soccer riot. There was yelling, grunting and groaning coming from all directions.

Both octo jigs got eaten almost as soon as they got to bottom, but the plastics remained untouched until I looked over at the sounder and noted a lot of fish life around 10m above the bottom. “Crank those jigs up about 10m guys and really twitch them with the rod tip,” I yelled. Sure enough, Yohan gave a cry of “strike… no… yes, fish on!” and Matt followed seconds later. It was now a four way hook-up with the only jig not taken being the knife jig. The Old Man, inspired by Matt and Yohan, cranked his knife jig right up through the water column and, amazingly, some 25m off the bottom it got smashed! Now it was all on, with every man for himself. We ducked, dived, danced and weaved around the deck until fish began to show. Mine ended up being a cod on one hook of the octo jig with the other hook missing – probably the work of a big red. Sam and Yohan both yielded massive chinaman fish, which went back; Matt got a big cod on the grub; and dad, on the knife jig, got a beautiful nannygai.  Reefy number two on the metals!

But then Sam really took things to the next level. He went to his tackle box and pulled out a soft plastic Zman frog designed for popping in freshwater for barra, the Pop FrogZ. He rigged it on the bottom of his octo jig, via a length of Dacron cord and a big single hook, and dropped it down on the next drift.  Strangely enough, the frog actually looked pretty good.  As the green shape headed into the depths you could clearly see the little frog’s legs paddling away.  The octo also had a big saltwater fly split-ringed to it and a curl tail grub rigged on that, so it was what Sam described as “pimped to the max”.

I’m pretty sure we were all still throwing off at him about “deep sea reef frogs” when his rod tip was reefed downwards into the water’s surface.  The big spin reel he was using was screaming and we could all tell it was a decent fish.  By this stage we were all hooked-up once again on our various jigs, but everyone had one eye on Sam to see just what had eaten the frog.  It turned out to be one of the biggest nannygai of the trip, if not the biggest!  And guess what?  It had the frog firmly planted in the corner of its jaw with the octo hanging free!

My take on this is not that nannygai actively feed on frogs, rather, that when they are actively feeding, they will feed on anything!  In fact, you can probably draw a nice comparison between these three unusual captures.  Firstly, the barra, which were likely just grazing, needed to have the exact bait profile matched to get them to bite, whereas Sam’s nannygai was actively feeding in a competitive environment and thus hit whatever was dropped into range before anything else could (you can imagine how visible such a rig would be descending through the depths).  The two fish on metals were much the same story, because in a competitive environment anything that flees, is prey!  I suppose the lesson is to look for actively feeding fish, using all the sensory or technological tools available to you, and if you can’t find them feeding, go to where they should pass through and give them an offering they can’t refuse!

Till next month, fish hard and stay safe.