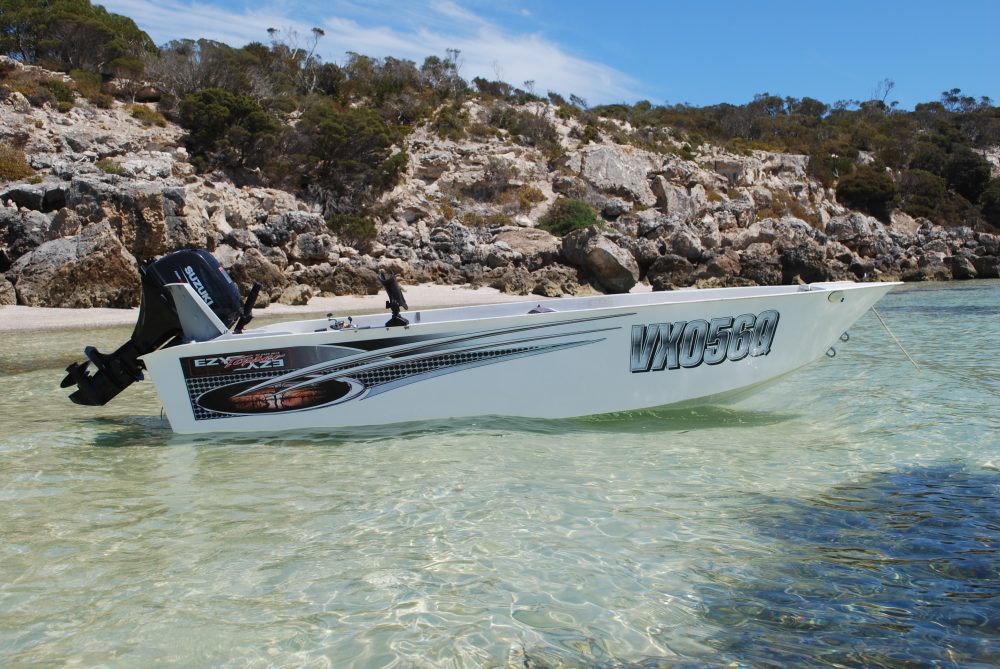 The true test of any product is, “use and reliability over time.” It has now been just over two years since I first purchased one of Enlightened Boating’s, v-nosed, 3.7m “Ezy-Topper” dinghys and having used it from Cape York to the Great Australian Bight, including alpine lakes and inland rivers, it is time to report on how this boat has performed.

As a resin infused foam with fiberglass shell construction, the hull is a purpose-built design. It is super light and super strong, which makes it perfect for car topping – the primary reason as to why I first investigated the boat before finally settling to purchase one. The boat has not let me down in any aspect of usage, be it transporting, or fishing.

The 3.7m V-nosed hull in its basic form weighs in at a very low 60kgs (officially weighed using standardised scales). My boat, which I call – “Fishin’ Ezy”, has factory added extras that are needed for my style of fishing – primarily luring, live baiting and trolling – and comes in at a very manageable 74kgs. It includes:

All in all, a very complete and compact little package. Modifications since purchasing the boat have been the addition of gas struts to the casting deck hatch – a real asset when there is a wind blowing and conditions are a bit giggly.

Two of my early concerns about the construction of the boat were the strength and durability of the bond between the fiberglass shell and the resin infused foam sheeting, and the structural resistance of such lightweight material to impact with objects such as rocks, sand bars, logs and even the ever-so-friendly pontoons (which are great for ripping off navigational lights and gunwale-mounted rod holders!)

After two years of solid use under a range of conditions, the integrity of the strength of bond has not diminished (and this includes car topping over more than 1500klm of rough corrugated roads). My initial concerns were mainly around the transom and forward bulkhead where the casting deck fits. For me, this area also seconds as a seat, when there are two in the boat. It is also the area where I tie off my esky. There are no signs of cracking, or splits in any of these critical areas.

Like any glass boat with a gel coat finish, sharp and even blunt, objects will scratch, or dent, the hull. Fishin’ Ezy has her share, but they are superficial only and I look upon them with the opinion – “Well done old girl!”

And if I had any further doubts, or concerns in that area, then they were quickly put to rest after a recent conversation with John Hall of Enlightened Boating. John had recently received a well-used Ezy Topper “Barra Punt” sent in for repairs after breaking its mooring and washing up onto a rocky shore-based oyster lease, in the waters of eastern Tasmania. It was awash upon the rocks for three days before being found by its owner. The result – an abrasive patch the size of a dinner plate on the port side, where the hull had been constantly pounded against the oyster rocks. The gel coat was completely shattered and stripped and the fibreglass shell had been partially penetrated. But, there was no shattering of the fiberglass, no breach into the foam walls and, as importantly, no break in the glass/foam resin bond. According to John, a scientific scan of the area showed more than 3000 individual impacts – with no structural damage. 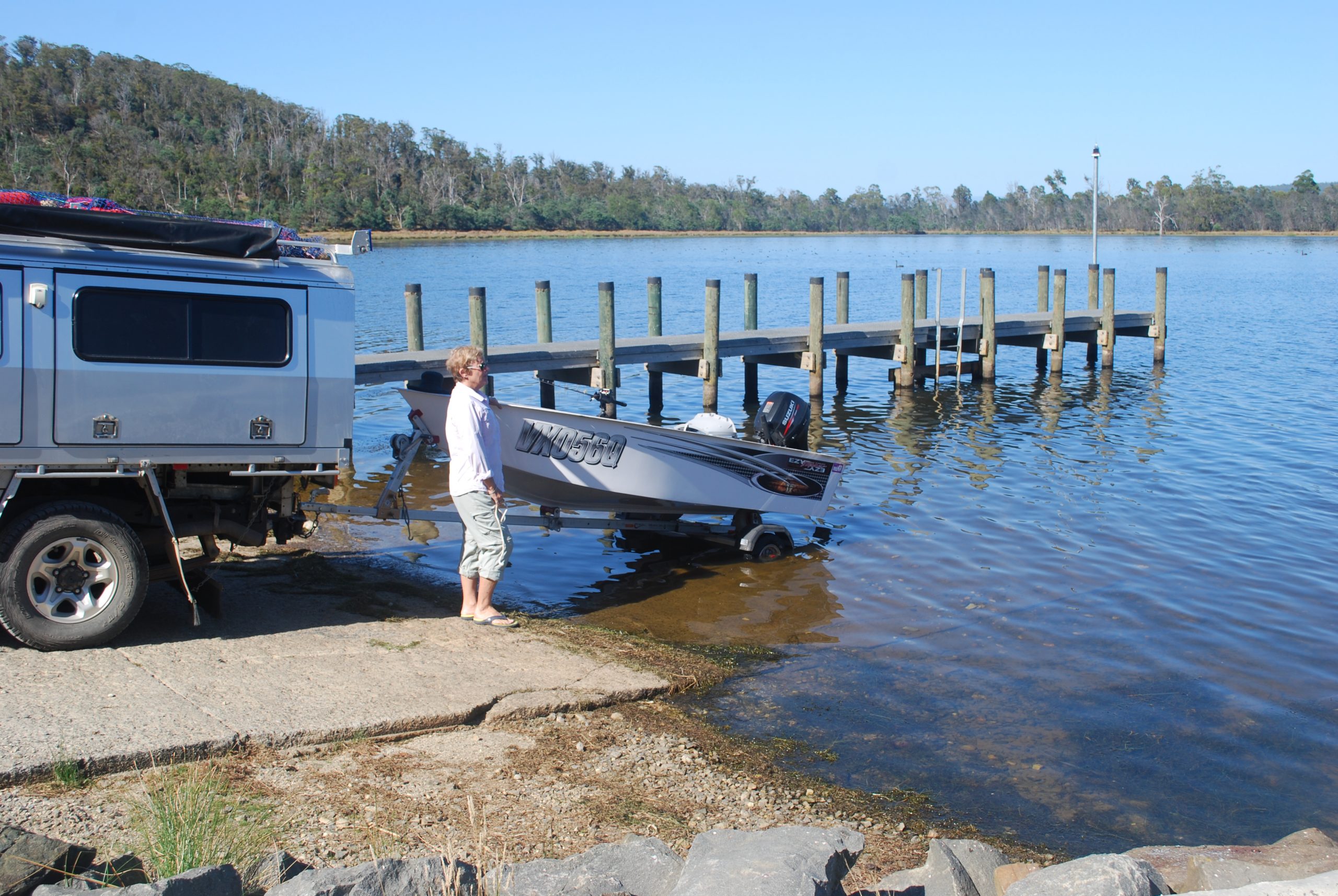 The 3.7m hull has its limitations. I would have dearly loved the 4.1m model but it came down to manageability and length of boat and overhang vs. turning circle of car and caravan. So the 3.7m it was. And the little boat has been put through its paces.

As a creek/river/bay boat it is up there with the front-runners. The ride-ability of the boat has to be experienced to be believed and understood. It is sheer boating pleasure with comfort, direct response steerage and control under all circumstances. The curves of the line where the bow breaks the water and the concave arc from the keel to the near vertical chines is a design that traps air under the hull giving the boat both lift and cushioning under power. The sharp chines cut the water like a knife and any turn of the tiller creates an instant change of direction. It is the sort of boat that will tell you how to perform, as I recently found out.

I got caught out in the isolated Southern Ocean waters west of Cape Jervis, SA. I was not far offshore, about 2km, but with the sheer rock walls of coastline extending for kilometres in either direction, there was no place to make landfall. It was about 10km back to the harbour.

I saw the cloud front, well away to the south west, but, being a newcomer, did not realise just how fast these southern fronts move, so continued fishing and squidding. The front was upon me so quickly I shivered in disbelief. The lines were wound in and stowed and the motor started. By this time I was in 1-1.5m swells with a half to three-quarter metre of sea on top. All being pushed along by 25 knots of wind gusting to 30 knots.

For the first time in my fishing and boating life I grabbed the bowline, tied it around my waist, then secured the kill switch lanyard to my wrist. I couldn’t get to the life jackets as they were under the casting deck and as I tried to lift the hatch the boat took-off. The hatch acted as a sail!

There was no way that I could safely turn the boat in those seas without the possibility of being flipped over, so just pushed into them, heading away from the coast. The boat performed admirably, and whilst I was on edge, there was still a sense that Fishin’ Ezy would get me home and out of this.

A break came in the seas, four or five swells in succession that were rolling but not breaking. The little Ezy Topper was dropped over one swell, then turned at right angles beneath the next. With the lift of the wave the turn was complete – a full 180° and we shot-off in the direction of the harbour. The ride was a roller coaster, but at no time did it feel unsafe, to the extent where control was lost. And I put that down to the boat itself. I was just the driver.

One of the boat’s main attributes is its floatation and ability to get into and out of places with the minimum of fuss and water.

Fully laden with fishing gear/esky/fuel and with two people on board, the boat will float in 150mm of water and plane in depths of between 400-500mm (depending on wind conditions). I found this extremely handy when fishing places like Hinchinbrook in NQ and Streaky Bay and Coffin Bay in SA; it gave the option of staying longer in places where the tide was most important for late, or early, access as well as allowing the option of “rat-racing” the sandbanks when the wind chops up the waves in the deeper channels.

As a Fishing Platform

The hull width of the 3.7m V-nosed dinghy is 1.63 metres. The sides are near vertical and the chine lines enter the water as a sharp-edge. The internal floor is flat with the lift in the bow starting just forward of the casting deck bulkhead. This design offers an extremely stable platform and I often walk around the boat when working a creek with lures, or when castnetting for prawns, or livies. 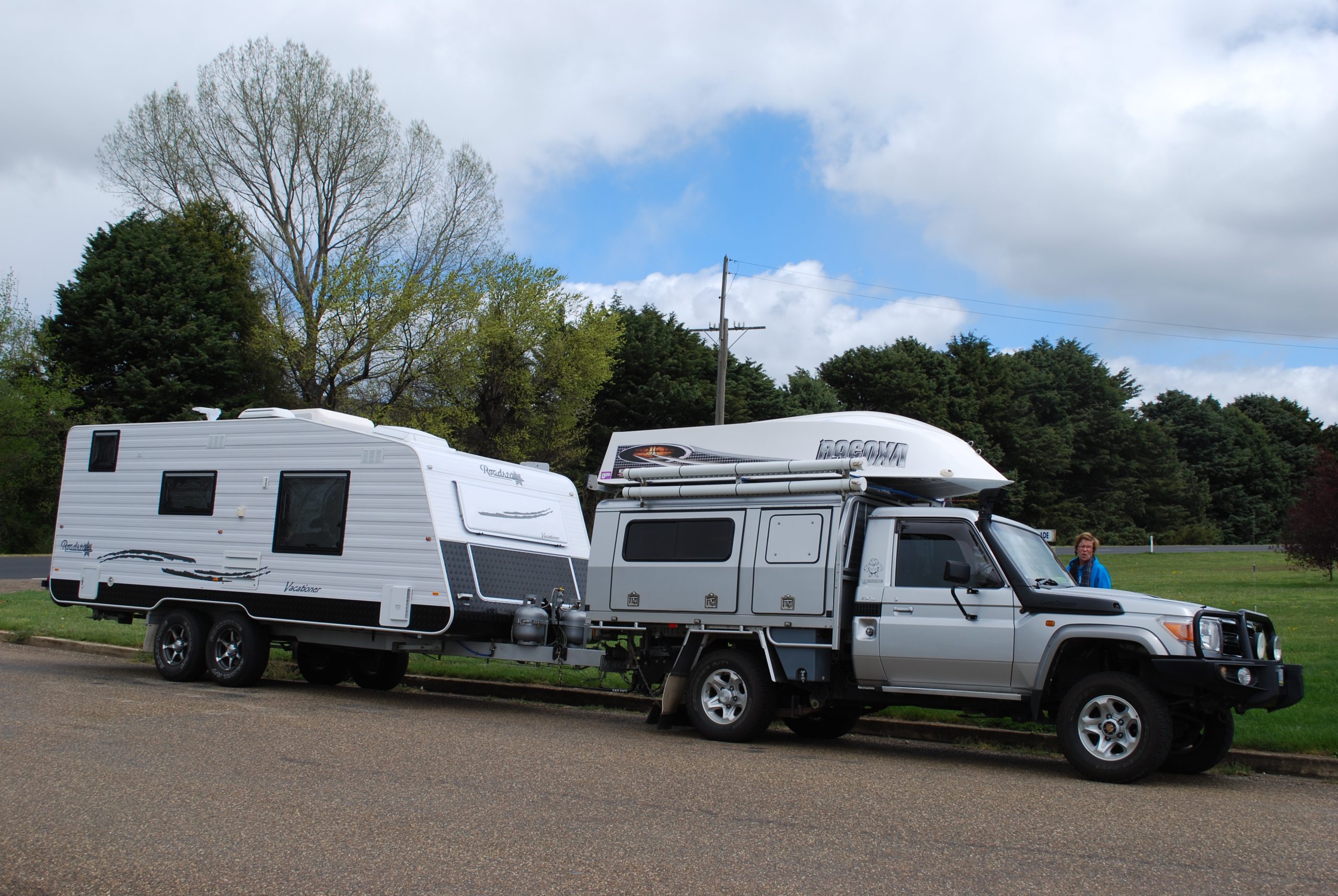 At just 74kgs and with such an advanced hull design, the 3.7m does not need a lot of horse-power to get her up and running. Fishin’ Ezy has been fitted with one of Mr. Suzuki’s best, lean-mix, 4-stroke 20 horses, which is more than adequate for the job. I fitted that size motor for the long runs along coastlines and down rivers in both the Gulf and the Top End. It is a reliable and economic power unit, and whilst it is more than adequate for the job, I have become very reliant on its performance. Certainly in the areas of top end speed which is around the 23knots, and fuel consumption which comes in at around 8.4km per litre at 17knots – very economical.

To date I have found only one shortcoming of the boat – it sails in both wind and upon the push of the tide. This can be a real nuisance, especially when lure-casting in a tight mangrove creek, or when tactfully live-baiting a likely snag or drop-off.

When bait-fishing such locations, two anchors, or a tie-off rope are essential, one set from the bow and the other a stern line, or the boat will sail the full length of the single. This can, and is, bloody frustrating. Except for one case when live-bait fishing Sunday Creek in the Hinchinbrook Channel. The boat swung on the anchor, the live mullet, which had been sitting in the same spot for about half an hour, pulled sideways and was immediately smashed by a 6kg barra. It was sitting and watching. But in general, the two-anchor method is by far the best.

The problem of “sailing” when lure-casting can easily be overcome by the use of a bow-mounted electric motor. I don’t carry one when travelling – it all comes down to weight and space. There is just so much one can legally carry. On a recent bass fishing trip to the Tweed river in northern NSW I fitted a stern mounted electric and even that was more than sufficient to overcome the “sailing” problem. If I was not using the boat specifically as a car topper, then I would have an electric bow mounted to suit my preferred type of fishing.

For more information on the 3.7m V-nosed EZY TOPPER , or other boats in the Enlightened Boating range visited their website www.enlightenedboating.com.au– or visited their Facebook site