Deep Drop Fishing – The highs and lows – By Gyula Vari 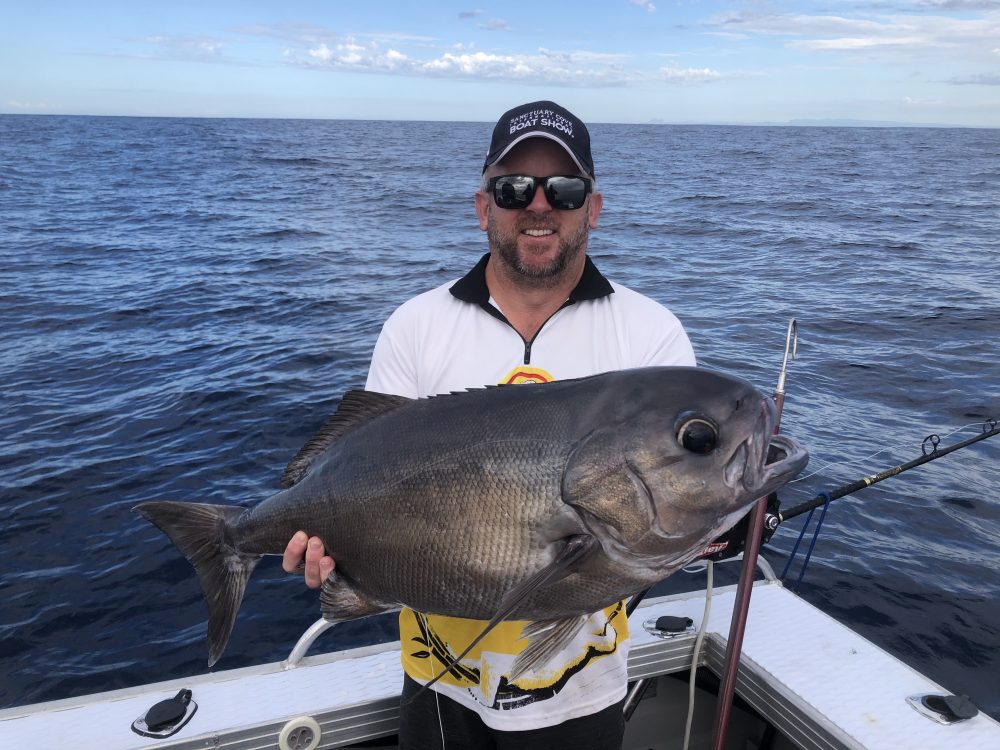 Like most fishing trips, Deep Dropping takes a fair bit of planning in order to ensure a successful trip, and when all the stars align, all that remains is for the fish to join the party. Generally, I will plan a trip a few days to a week out with the weather being the main consideration. If the weather stays true, then it is all systems go! On this occasion however, the stars aligned the evening before, and a spur of the moment phone call was made to my good friend Dan, and the trip was set! 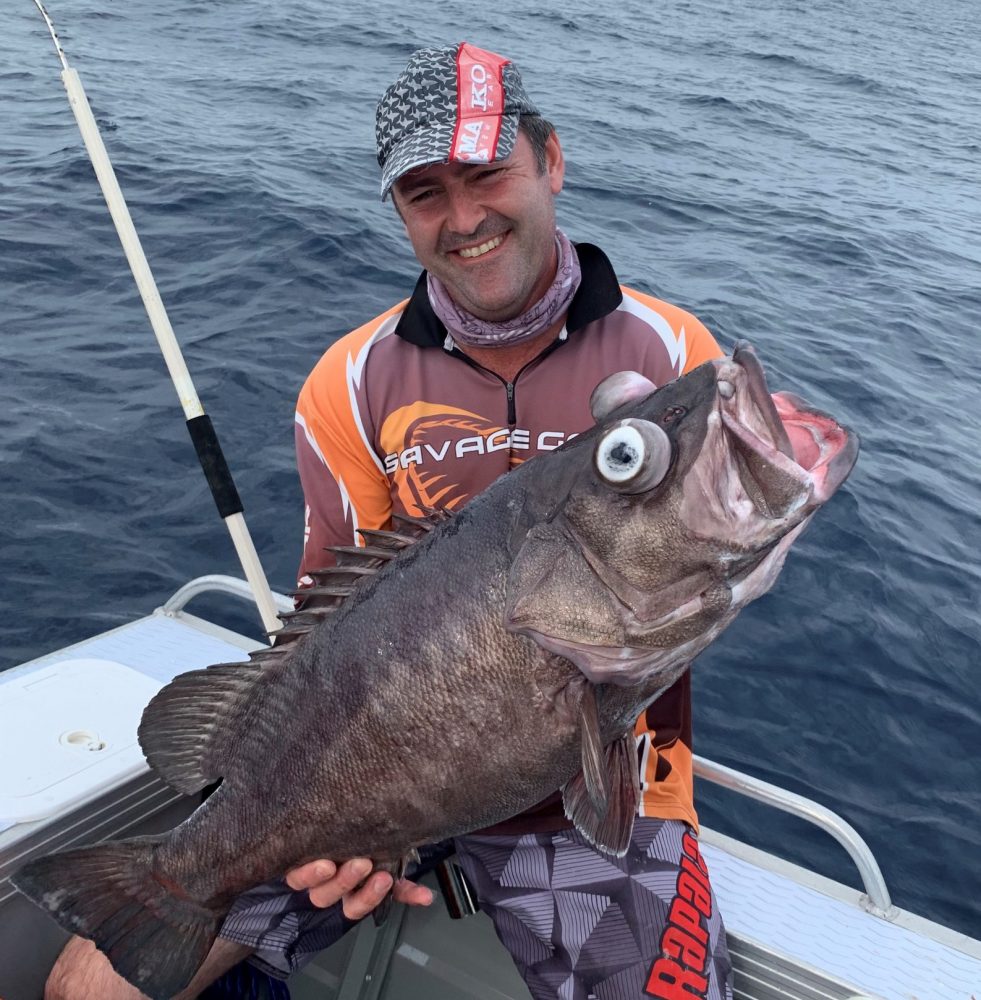 Gyula Vari with a smaller harpuka from 400 meters.

It was an early 3am start the next morning with the boat fuelled and gear ready to go, we just needed a quick pit stop for a coffee and a few bags of ice. We arrived at the boat ramp at 4am and the weather forecast was spot on! Not a breath of wind, so we wasted no time launching the boat. We set our course due east of the Southport Seaway, for an hour or so run out to an area called the Riviera Grounds. This area is quite large and holds some good deep drop fishing ground with some steep ledges. With all the excitement of the weather being perfect and the ocean flat as a mill pond, it seemed like we were driving for hours! But as planned, we arrived on one of my favourite marks on sunrise and we wasted little time setting the para-anchor for our first drift. The Simrad showed some signs of life, but not what we were really hoping for. This was ok though as the first drift or two is generally a test drift to work out drift direction, current speed, and some sounder fine tuning. Whilst Dan was ensuring we had the boat set up, clutter free deck and gaffs at the ready, I rigged our first mullet strip baits and dropped the 1.5kg sinker and rig over the side and watched it disappear into a colour of deep blue. The water clarity out here is amazingly clear and has an almost purple tinge early in the morning as the sun is still low on the horizon! A couple of minutes later,

The baits hit the bottom at 480m, and as I locked the free spool back into gear on the big Kristal Reel, the rod instantly loaded up!

I engaged the up switch on the reel, and to my surprise, the rod tip buckled right over with tip under the water’s surface, at this point, I turned to Dan and yelled “We are on and it’s decent!!” Dan was pre-occupied at this stage selecting a beverage from the esky, casually looked up at the situation and replied, “I think you have a snag?” But it was no snag! The 24kg rod was getting stretched but doing what it was designed to do, so I upped the ante on the big Kristal XL655 and applied more drag pressure, being careful not to overdo it as this model has 100kg drag and 450kg Fish Traction! By now, Dan had realised we were onto a solid fish and was ready at the side with gaff in hand feeling refreshed after his quick beverage. It took 4 minutes or so to have the first fish boat-side which seemed like a long time, but the Kristal made it look easy. When the fish hit the surface there was a quick celebration, and the gaff was set into a nice bass groper of around 50kgs!! 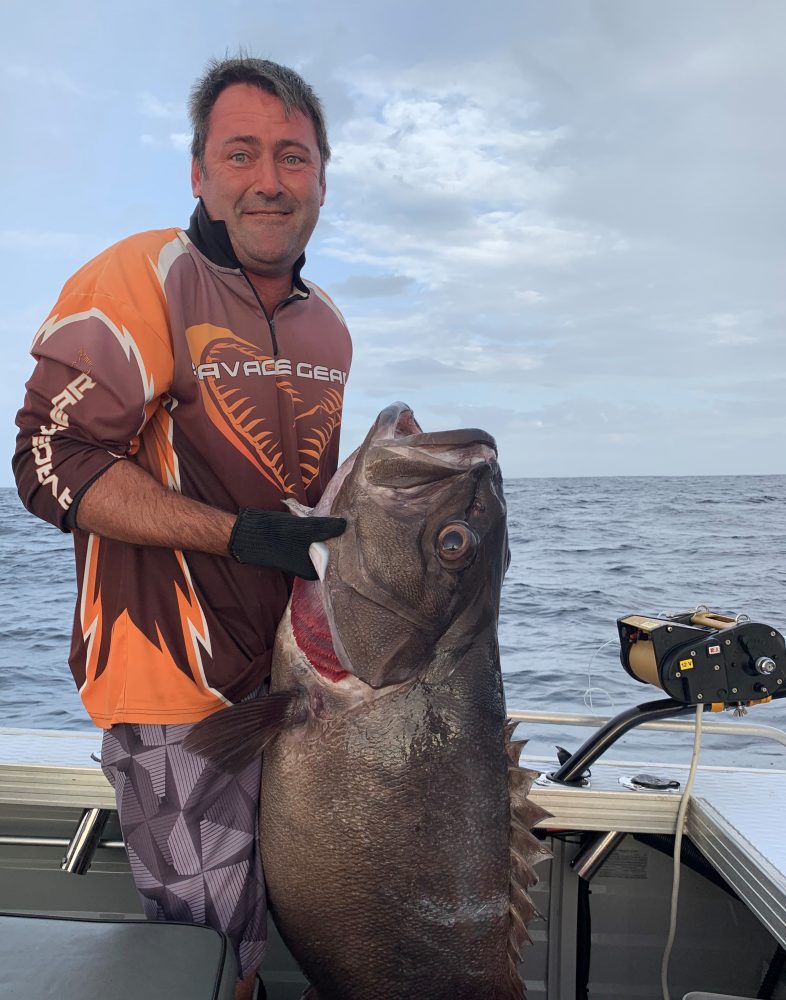 The struggle is real on this bass groper!

Luckily, I had brought a big, insulated fish bag as well as our standard esky, the fish was bled and iced down, which I do with all fish we keep for the table. Bleeding and icing down the fish as quickly as possible not only preserves the fish, but it makes it much easier to fillet and prep later in the day giving it a firmer flesh. Even with the Para-anchor out, we had drifted approximately 2klms from our first drop. Having everything re-set and ready for round two, we motored a few hundred metres north of our initial mark and found some better shows on the sounder. Now I’m not complaining about our first fish, but we figured one bass groper was enough, as our target species was the blue eye trevella.

The deep drop rigs were re baited with some mullet strips, and the reel was set back into free spool with baits heading back down to the abyss. We generally use three or six hook rigs, check your local regulations on the number of hooks you are allowed in your area. The current was only around 1knot, so the 1.5kg weight was more than ample. I generally carry one, one and a half, two and two and a half kilo weights. The need for any more weight simply means the current is too fast. The baits hit the bottom and it wasn’t long before we had a bite. It was nothing like our first drop, but for us the smaller fish (10-15kgs) are always welcome. It wasn’t too long before the up switch on the reel was engaged again, this time, the rod had what we consider a normal bend and the Kristal Reel just simply ticked over with no effort. The second fish hit the surface, this time resulting in a harpuka of around 12kgs. 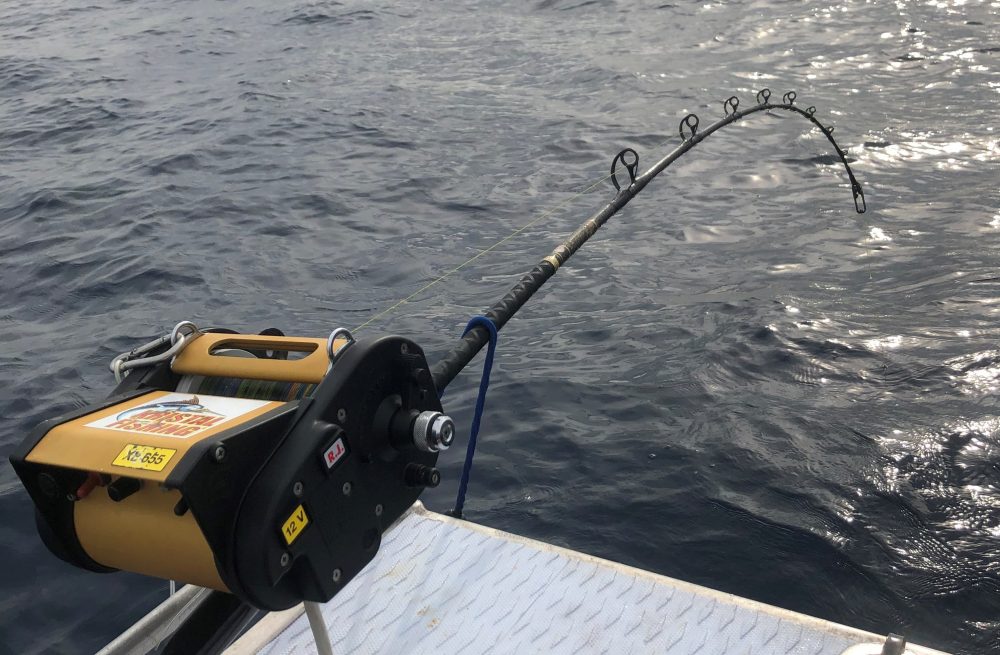 Kristal XL655 on 24kg custom rod loaded up on a couple of Blue Eye.

We re-set,repeated the same process again starting our drift on the previous mark. Once again, as soon as the baits hit the bottom, the rod and reel were back into gear, and we had something on the end of the line heading back towards the surface, we were confident it was a blue eye which tend to fight with more head shake. This time the celebrations were a bit louder as we had what we came for, two nice blue eye around the 15kg mark. We thought we’d try one more drift over this ground for a couple more blueeye for the esky and we will call it quits for the day, not that we had to be back home in a hurry.

However, what happened next just cannot be explained, we reset for the same drift, had the same drift direction, same baits and the fish just shut down!! I guess that’s why we call it ‘fishing’ and not ‘catching’! We drifted over the same ground with good fish shows on the sounder half a dozen more times to no avail, not even a bite! By this time, it was 8am and we used this downtime to have some morning tea and coffee. After morning tea, we decided to head a little further north to an area called Jim’s Mountain.

A twenty minute run later, we pulled up on a couple of marks that we have had good success on previous trips, but it was all in vain. The weather started to change with what appeared to be a storm front not too far north from where we were. The storm was heading East strangely, so we persevered with excellent shows now really lighting up on the screen, but the fish were still not interested in our offerings. We tried different baits, squid, yellowtail and mullet, but still no luck. It was around 9:30am, and we were fifty-fifty on calling it quits or try another mark? We were torn, having spent a good 3 hours without a bite!! What a contrast from our first few drops earlier? Do we go home or invest more time? As true fisherman, we decided to persevere, sometimes, you just have to put in the hard yards to get the results, well that’s what we convinced ourselves of anyway.

We have quite a few marks in this region, but the crazy decision was made to head back to our initial mark we started from in the morning, despite the fish shutting down earlier, and knowing there was a good chance they were going to be non-compliant. But off we went. It was a slightly lumpier run back south with the storm front now gone but the wind having picked up a little. Upon arriving, the Simrad screen was even more alive than in the morning and the drift direction had changed a little, but sometimes that isn’t a bad thing. We were drifting from a deeper ledge over a rise, and with this in mind, we had to be more alert and careful to keep the sinker just off the bottom to avoid snags. Snags can be a big problem in this area if you are dragging your rigs along the bottom. But we had a good feeling about this drift!

First drop down and again, instant hook up! How quick things can change from good to bad and good again. This time we had a couple of gemfish hit the deck, a welcome by catch when targeting the blue eye. The next couple of drops resulted in another blue eye and two more harpuka. The extra time invested paid off, and with the esky now full it was time to head back home. We experienced the best and worst fishing can offer going from a hot bite session to not even a nibble and then back on again! Just goes to show, perseverance can pay off!