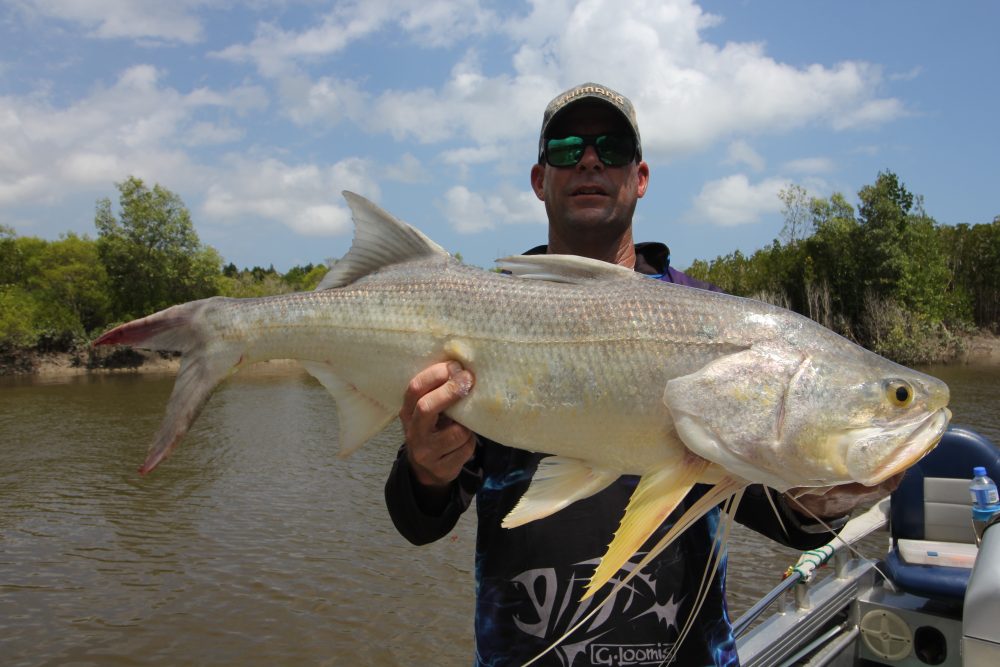 Bathurst Island is one of the best places to target large threadfin salmon in the Northern Territory. I have fished this area for many years since being a young fishing guide at Bathurst Island Lodge way back in 1996. I enjoyed my time immensely guiding in this pristine part of the Territory and learnt many things during this time. One of my favourite fish to target during this time was the Threadfin salmon and Bathurst Island, particularly around Port Hurd had plenty of them, but getting them to take a lure was a completely different ball game. 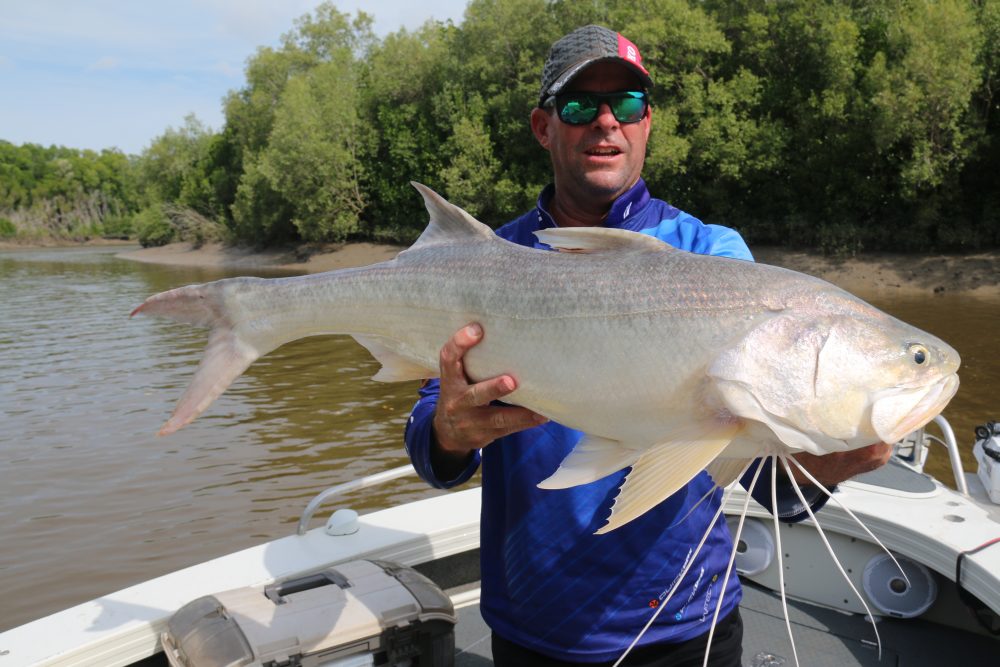 This big threadie smashed a berkley bazz bait on the cast.

I can remember plenty of hours chasing these frustrating fish both on the flats and in the creeks. The sight of these incredibly large fish cruising the flats was a sight I would never forget and one of the reasons I kept returning to this area to target these impressive fish. The fishing lodge in Port Hurd still remains to this day and has had many operators, but is currently operated by Matt Wright with permission from the Tiwi Island land council. You need to be a guest of the lodge in order to fish these waters.

I have had several trips to Bathurst Island this year during the build-up from September to November, which is a great time to target threadies and barramundi. I have mainly concentrated my efforts on some of the smaller creeks that are located just outside of Port Hurd in Gordon Bay. These creeks are only a 15-minute boat ride from the Tiwi Island resort. The main reason I like to fish these creeks is due to the presence of large schools of threadfin salmon at this time of year. They can be sight casted in these creeks during neap tides when the water clarity improves. I have often witnessed schools of up to 100 threadies cruising these creeks ranging in size from 100-150cm. 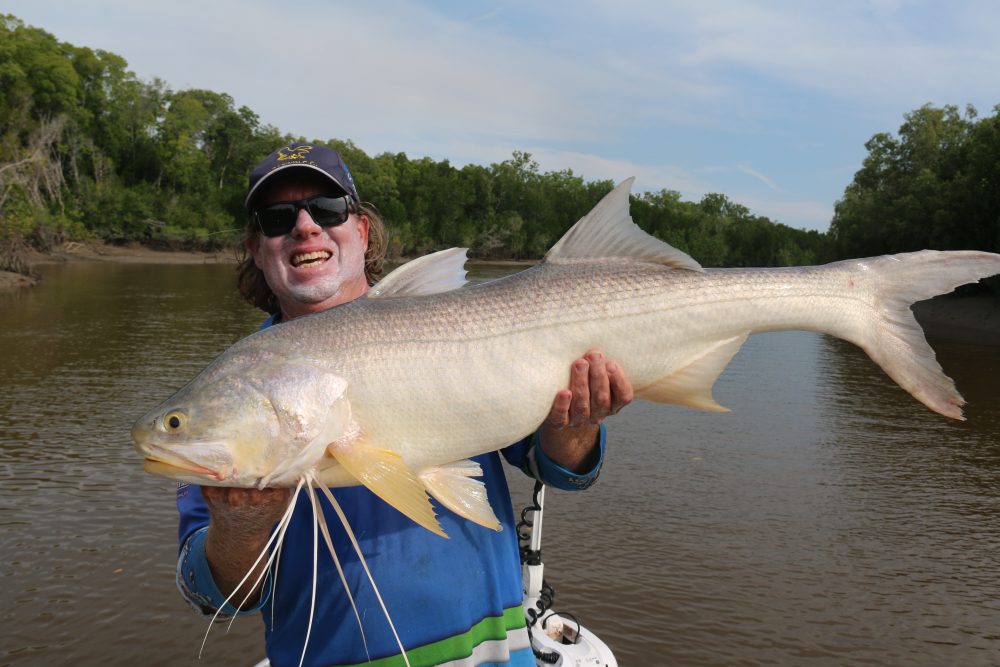 Braden Menzies with another threadie sight casted at Bathurst.

2021 was a good year at Bathurst with plenty of metre-plus threadies landed during the build-up. Most were caught on the cast, but some were landed trolling also. The best lures were small suspending ones cast to the schools of cruising fish. I did particularly well with the new Berkley bazz baits. The fluoro green colour working extremely well in the creeks. These lures were often smashed on the pause as the threadies chased them to the boat. Reidys B52’s also worked well and were often crunched on the troll as well as on the cast. When the threadies were sounded up sitting deeper in the water column then Reidys vibes worked well.

The outgoing tide in these creeks worked well, particularly on the bends of the creeks in the deeper water when the water started to eddie. We would spot lock our Minn Kota in the holes and observe the Humminbird Solix 360 sounder to see how the schools of fish moved and behaved in the eddies. This way we could target the threadies with particular lures depending on the depth they were sitting at. After landing a few threadfin, they would often become more difficult to hook as they wised up to our targets. Changing our lures regularly both in colour and action was necessary to keep the strikes coming. However, these creek systems are so small that we noticed the fishing was always sensational on the first day, but quickly diminished on the second day with fish more difficult to coax into striking. 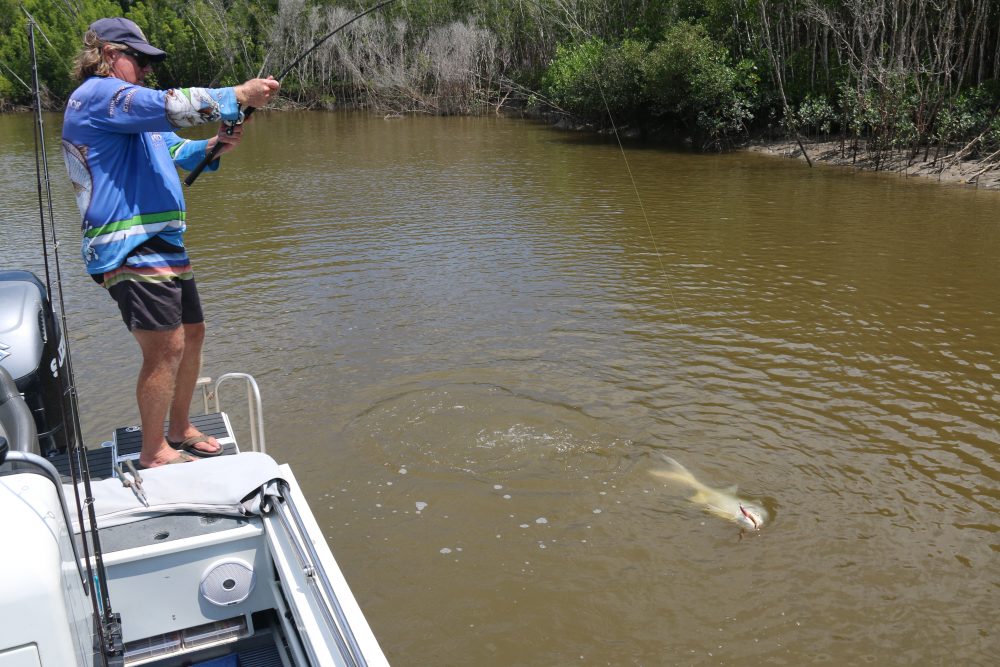 Sight casting to these impressive fish is some of the most exciting fishing I have ever had. Picture yourself quietly moving up a creek on your Minn Kota electric when you notice some large bow waves right down the middle of the creek just 50m up ahead.

As you jump onto the cast deck to have a better look, you notice a school of about a dozen massive threadies slowly cruising towards you with their pectorals out. In anticipation, you flick your lure about a metre in the front of the school and give it a gentle flick only to see it inhaled by a huge fish. Straight away, you lock up the drag on your reel and thumb it as the beast of a fish disappears in a flurry of water.

These big threadies are so impressive in their speed and agility that they are often two bends away down the creek before you even know what has happened. It is for this reason that I have lost many big threadies in this system to structure, as their blinding runs are difficult to curtail. 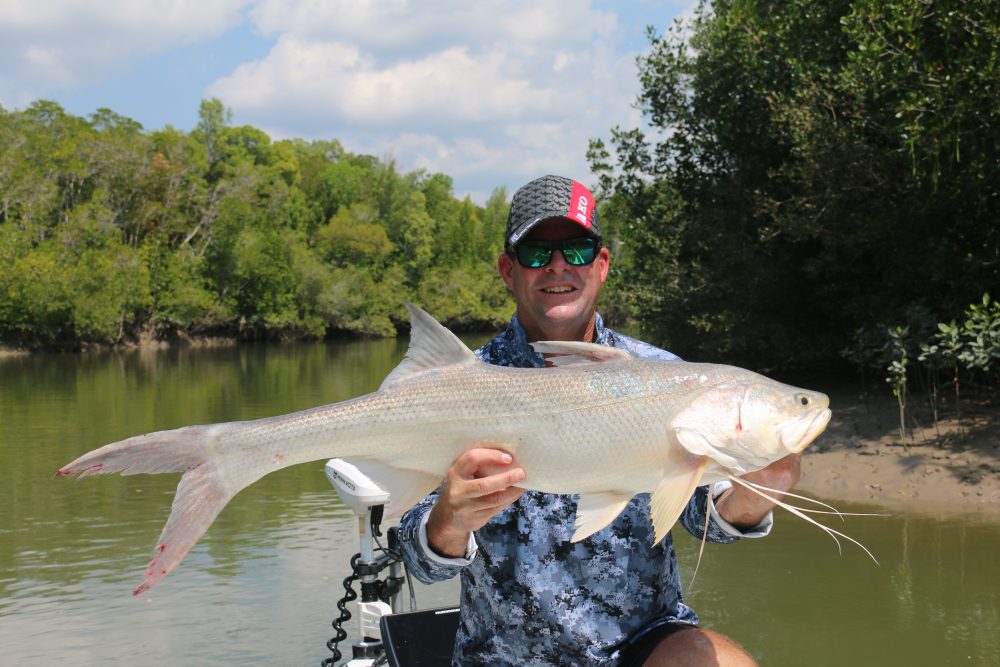 The largest threadie landed this year measured around 120cm and weighed 15kg. It provided plenty of action on 30lb braid and solid bait casting gear. However, fish of this size are common in the creeks of Gordon Bay, but as I said earlier are difficult to land in such tight conditions. The submerged structure in these systems are covered in barnacles and so as soon as a fish dives into cover the braid parts quickly. The average size of threadies landed is around 8-10kg, which makes the fishing enjoyable at best.

As soon as the tides start to build in these small creek systems, the water clarity drops dramatically and the threadies disappear from the system not even marking on the sounder. They seem to move out onto the flats in Port Hurd and work these areas and snake drains for prawns and mullet. These flats fish best on the last hour of the outgoing tide when they are exposed and the baitfish and prawns are flushed out of the mangroves. The good fishing continues up to the low and for up to two hours into the incoming tide until the bait and predators move up to the creeks and mangroves again.

I have found that the threadies are a lot more difficult to land during the spring tides, which is why I prefer to fish Bathurst during the neap tides. The threadfin can also be targeted on the flats during the neap tides, but are not as abundant as they seem to prefer to move around up the creeks during this time. They are an inquisitive fish that are easily spooked so make sure you move around slowly and as quietly as possible when chasing them. This way you will indeed increase your chances of landing one of these magnificent sport fish.