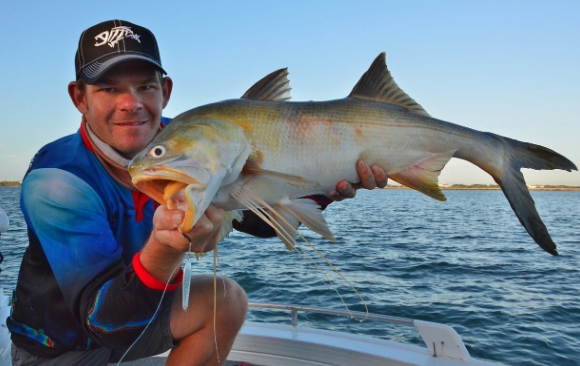 Threadfin salmon, or threadies, have occupied the Brisbane River for many years. About 12 years ago, a population explosion started the phenomenon that has attracted fisherman from all over Australia. When I first moved to the river city, I read an article by Brisbane River legend, Gavin Dunne, which initiated the fascination for this iconic fish. Who would have thought that you could catch a 50lb threadfin salmon in a river that runs through the third most populated city in Australia?

Although threadfin salmon, also known as king salmon populate almost all of the rivers and creeks along the Queensland coastline, it is the Fitzroy, Mary and Brisbane Rivers that hold huge numbers. I’m not sure of the exact reasoning behind this, but there are perhaps a few factors contributing to these amazing fisheries. All three rivers have changed immensely since European settlement. Dredging, blasting, clearing of vegetation in the upper catchments and development in the lower catchments has resulted in massive sediment load, making these three rivers the most turbid in Queensland. They also have expansive tidal flats with adjacent deep water and plenty of bait, which is perfect habitat for threadies. Generally, threadfin salmon do not hunt through sight since they have quite small eyes. Instead, they have evolved to use their large sensory whiskers to locate, feel, and heard prey. I would say that this method of hunting bait along with the ideal habitat makes them well adapted to prosper in the muddy waters of these three rivers.

Up until late last year, I had only caught a dozen threadies and hadn’t put a huge amount of time into targeting these river brutes. Regular photos of threadfin salmon appearing on my Facebook newsfeed last year fired me up to put in some hours as soon as it started to warm up. Although threadies are caught throughout winter, the best time to catch them at the mouth of the river is from October to April, with the summer months being ideal.

From October to April last season, I put over 50 threadfin salmon into my boat over 10 – 12 sessions. Ninety per cent were over 100cm. One memorable session resulted in 16 fish over 3-4 hours, including my PB of 125cm, hauled over the gunnels of the Quintrex. From what I researched beforehand, I was able to locate and use the right techniques to achieve some spectacular fishing. Although it sounds easy, at times it was far from it. Often we spent hours sounding around, sitting over massive schools for them to continually reject our offerings. However, with a bit of patience and refining of my technique, I was able to learn from each trip and consistently land these special fish. Below are a few tips I have picked up over the last year. These same techniques are transferrable to any system that holds a population of threadies.

The combo I predominately use for threadies is a medium size baitcaster, spooled with 20lb braid and 40lb leader. Heavy braid is necessary for protection against oyster-encrusted pylons and 40lb leader is to stop their surprisingly sandpaper-like teeth chewing through the leader.

I prefer using baitcasters when targeting these fish as they provide more feel when compared with a spin reel. Often a thready will pick up a lure before it makes its way to the bottom. You can feel this while thumbing the spool with a slight change of weight and with line coming off it at a fast rate. Once this happens it is a case of turning the handle and setting the hook. It is much more difficult to feel a fish pick up your lure using a spin reel.

The only downside to using a baitcaster, is trying to keep up with the erratic fight of a thready. Often once a fish is hooked, it will swim towards you very quickly, catching you off guard and often throwing the hooks. As a beginner to threadies it is common to think you have lost the fish as all weight is lost. This is not the case and can be alleviated by winding as quickly as possible and trying to keep pressure on the fish. It is difficult to keep up with a fish with a low ratio baitcaster, and so 90% of my fishing is with a high ratio baitcaster. My preference is a Daiwa Tatula Type R, but there are plenty of others on the market that will do the same job.

There is little doubt that the most effective lure used to catch threadies in deeper water in any system is a vibe. Soft, rattling, hard and metal vibes all work, and provide a vibration that is hard for a hungry thready to resist. Vibes that weigh around 25 – 40 grams are heavy enough to fish the deeper areas, but also small enough to imitate their prey. Micro jigs and heavily weighted curly tail plastics can also be effective and provide something different for dropping down into schools of fish.

A good sidescan sounder is necessary for finding schools of threadies. If you know how to use a sidescan sounder, you will not have any problems finding them. During the warmer months, big schools can be found anywhere between the gateway bridge to the mouth of the river. It is simply a matter of side scanning wharves, drop offs, edges of shipping channels and deeper structures until you find a school. Last year I had a milk run of 6-7 spots that at some stage held fish. I would visit each spot, sounding over it until I found a school. Usually one spot would hold fish for 2 – 3 weeks before they would move on.

When the schools are small or congregated in an area, I prefer spot locking on top or within casting distance of them. If there is little current or wind and the fish are scattered, I prefer a slow drift. Depending on the location of the school, I usually cast up current and gently hop the vibe back to the boat. When the school is located directly under the boat on the sounder, it is as simple as free spooling the lure down and gently hopping it on the bottom. Since threadfin salmon generally feed close to the bottom, small hops of 20 – 30 cm are more effective than larger hops.

To say the bite of a threadfin salmon is frustrating is an understatement. Some days they will engulf the lure, which is easy to detect with a large thump felt through the braid. However, most of the time, bites will feel almost bream-like as they peck and play with your lure. This can be extremely challenging, since they can be very hard to hook when they are in such a mood.

Finding the fish is sometimes the easiest part; getting them to bite can be another story. There are times they will eat anything thrown at them, although most of the time it takes a lot of patience to get a bite. If I find a good school, I will persist for at least an hour and always return at another stage of the tide. Often I have driven away from fish only to come back later to find them biting. My first trip since the weather has warmed up resulted in two good hits for no fish from a 3-hour session. We sounded plenty of threadies and bait, but getting regular bites was tough. It was a short session, though if I had more time I would have been confident of landing a fish. The silver lining though is that it was good to see the river healthy again after a slow winter.

Last year by far the most effective tide was the last half of the run-out. Lower tides tend to push the baitfish that congregate on the flats on the high tide, into the deep water and drop-offs where the threadies school up and feast. I have found that different locations tend to fish better on different stages of the tide, so if you have a hot bite, make a note for future reference.

Leave your light gear at home if you are intending to target and release threadfin salmon. Lighter gear leads to a drawn out fight, which expends a lot of energy and increases the chance of the fish being sharked. Barotrauma is common when pulling threadies from deeper water, particularly larger fish over 110 cm. If your intention is to release, then a release weight is a must. These can be made easily with a hand line spool, 30 metres of thin rope, a stainless steel crew, two cable ties, a 16 ounce snapper lead, and a 9/0 stainless steel hook with the barb filed down. You’ll just need to screw the barbless hook flat against the snapper lead with the shank lining up with the top of the sinker. Then secure the hook with the two cable ties, attach the cord to the sinker, and then store on a hand line spool to keep tidy.

I have found that most fish around the metre mark swim off healthily without a release weight when pushed straight down using their strong tail. Like all fish, careful handling and keeping them out of the water for only a short period will increase their chances of survival.

Although threadfin salmon provide a great meal, I urge you not to keep too many and to look after any being released. Over the past 5 years there has been a huge amount of pressure placed on the stocks of Brisbane River threadies. Both commercial and recreational fisherman are targeting these species, with tonnes being caught commercially from outside the mouth of the river. There is some serious concern from many anglers that the fishery is not sustainable to both recreational and commercial pressures and is therefore under threat. There is little doubt that numbers and the average size of fish have decreased over the last 3 years. This is a sign of excessive fishing pressure and has to be managed effectively.

We are blessed to have one of Australia’s most exciting estuarine sportfish available on the doorstep of 3.4 million south-east Queenslanders. They attract many fishermen and similarly many local businesses are benefitting. With growing fishing pressures, we need to manage this highly valued fishery to ensure the sustainability and success of this species.