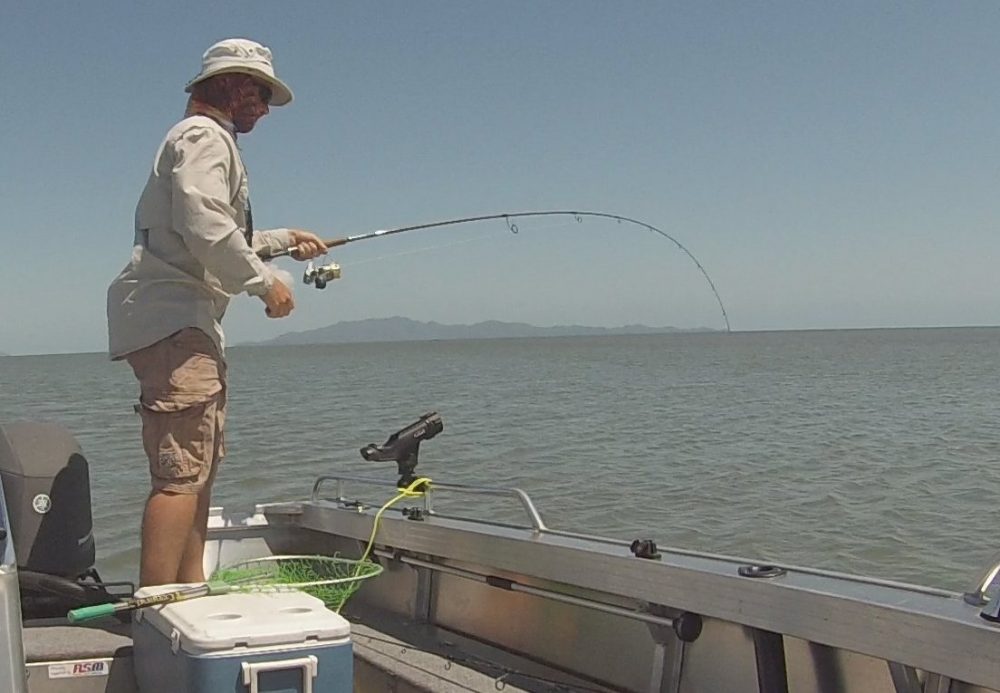 Catching a big barra over the magic metre mark is on many angler’s bucket list. I know it had been on my list for some time before I finally cracked my first metrey late in the 2013 barra season. I’m not too much of a keen freshwater fisherman, so my first magic metre fish came from a small estuary system in Townsville, as I’m also not a big fan of having to drive large distances to find fish. On that particular occasion I was targeting larger barra by using live mullet around 15cm pinned through the nose with a standard 8/0 octopus hook rigged on a single 40lb paternoster rig. The down side of my first metre barra was the 105cm barra was gut hooked and after the 10 minute fight, I couldn’t revive the large breeding female.

This fish was a turning point for me, I begun focusing more of my efforts on learning to use my side scanning sounder while trolling deeper stretches of the river. While this technique quickly clocks up the hours on your outboard, it has been a reliable technique to locate and entice a strike from barra. I have been trying to map barra feeding times in relation to tidal movements and this can only be done by spending a lot of time on the water fishing and observing bait movement. When possible, I try to fish midweek to avoid the weekend boating traffic. During the week I made a last minute decision during a hectic day to head off after work for a quick fish, mainly because I was keen for a fillet of barramundi for our Saturday night burgers. 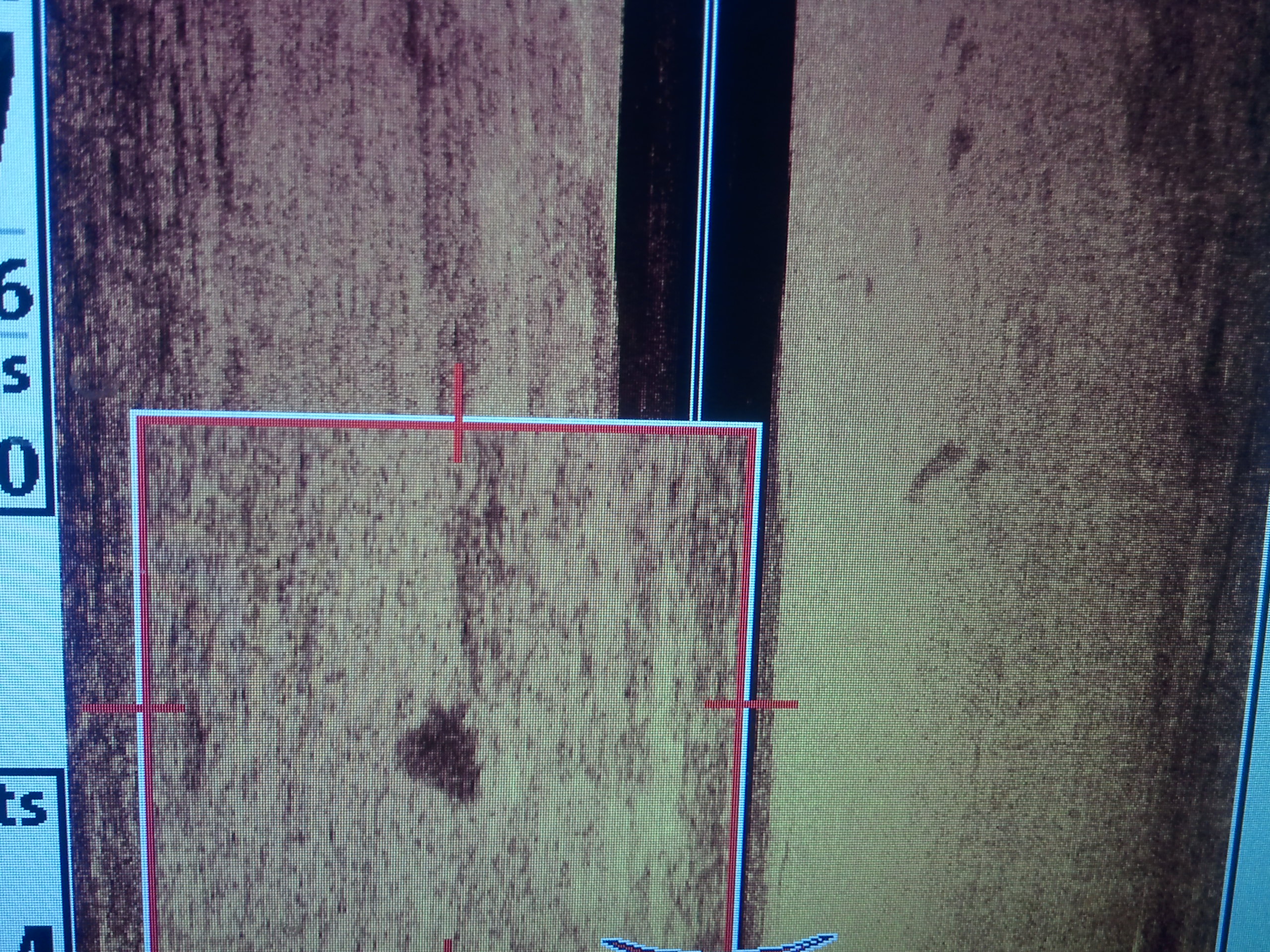 Time was against me, and if all went to plan I would have an hour and a half of fishing time, at best. Arriving at my intended area to fish, I immediately noticed a lack of nervous bait on the surface and the images being displayed on the side scanner were lifeless also. I began trolling forward and backwards over this stretch of water with two lines trolling a Barra Classic and also a Cutting Edge Rock Prawn clipped onto my 40lb mono leader. I also had my electric motor deployed at the bow for assistance to hold the boat in place if I did hook-up (as I was fishing solo). On the fourth pass I decided to troll slightly further past my regular turning point, hoping to find a fish on the side scanner. It wasn’t looking good for my sneaky afternoon fish, but who cares, it was a great way to wind down after a tiring day. Regardless of the fishless images on the sounder, my port side rod with the Rock Prawn loaded up and an average barra jumped at the back of the boat. Keeping the boat in gear, I cleared my second line, before turning the engine off and engaging the spot lock to secure the boat in position while I fought the barra. The fish swum up current past the boat and began to acrobatically jump in front of the bow. My whippy 6kg spin rod made it easy to keep constant pressure on the fish to ensure it did not shake the hooks. As the wind-on leader approached the rod tip, a quick scoop with the landing net secured the fish.

I personally always feel under pressure until the first legal fish is boated. This mid 70cm fish took the monkey from my back and I was keen to see if there were any more barra keen to play.

I reset my lines and resumed my trolling pattern, with the tide beginning to move a little more, schools of nervous mullet begun moving along the banks of the river. The nervous body language had me hopeful of predators in the area, yet the sounder was not revealing this. Time and again I trolled up and down this same stretch of water with my eyes glued to the sounder, looking for the identifying bumps on the side imaging screen of barramundi. I began finding a few isolated school sized fish moving through, yet I couldn’t entice a strike. A quick change of lure colour and a fresh pass of the river bank had my eyes wide open when I noticed a significant fish pass by on the port side of the boat. Understanding where my lines were, I responded quickly on the steering wheel turning the boat in a sharp dog leg to try and get a lure over the top of the fish. I was expecting a strike on the rod on my starboard side, so I turned my attention to my light 2-4kg rod to see if I had done enough to get the lure into the zone. A bounce of the rod tip was the only evidence of the strike on the Barra Classic 120 followed by a visual of a huge bucket mouth breaking the surface to try and shake the lure. The sight of this commotion momentarily broke my concentration as I stumbled in the middle of the boat looking at the rod on my left, with line now screaming from the spool of my little Stradic 3000, and the second rod on my right. I was trying to decide which rod to grab first. 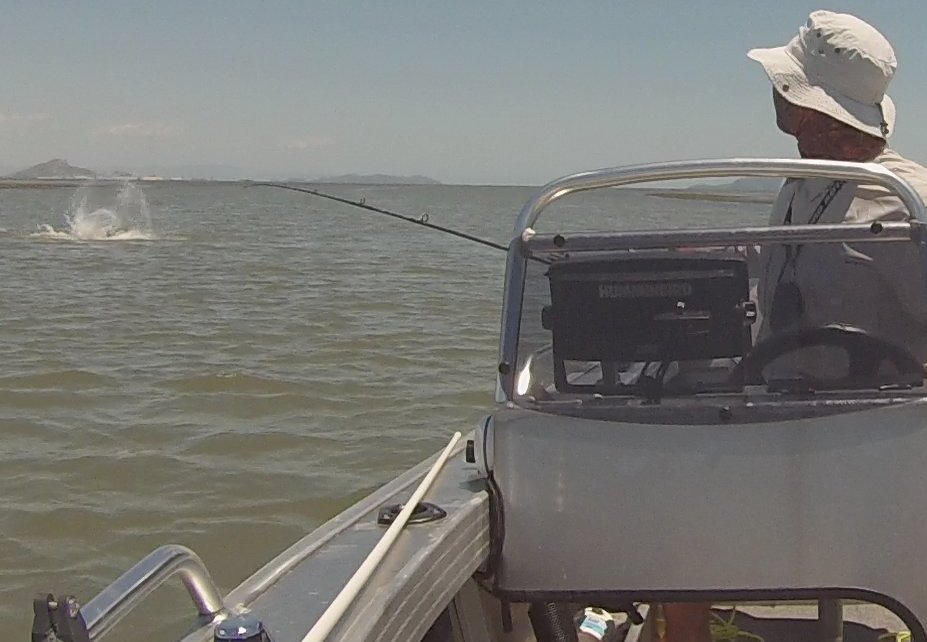 Remembering my routine, I left the boat in gear to ensure constant pressure on the hooked fish while she sped off to Magnetic Island which gave me the chance to clear the second line. Once the second line was cleared, I knocked the boat back into neutral as I picked up the light spin rod to begin fighting my angry barra. When the boat stopped it’s forward momentum, I engaged spot lock and patiently began trying to recuperate some line on my reel. The first run had taken around 150m of my 20lb braid and my spool was looking bare. A few minutes into the fight and I wasn’t making any ground on the barra; she was sitting in the current and slowly dragging more line from me. I used the electric motor to controllably give chase until I had recuperated enough line back onto the spool to give me a little more confidence in the battle. I re-engaged spot lock when the big girl surfaced within 10m of the boat. During the fight there were no spectacular aerial jumps as she preferred to play it out deep in the water, occasionally surfacing beside the boat to eyeball me before a splash with her tail as she dove back down into the murky water. The final five minutes of the fight was within close quarters of the side of the boat. I could see my prize, yet she was clearly not ready for a picture yet. I was feeling confident that the battle was all but over when I felt that distinct, gut-retching ‘pop’ shudder down the braid and through the rod tip – one of the trebles had just straightened and come free. I loosened the drag and begun cushioning any dive of the fish through my arms to try and minimise any extra pressure on the last treble that was pinned in the mouth. 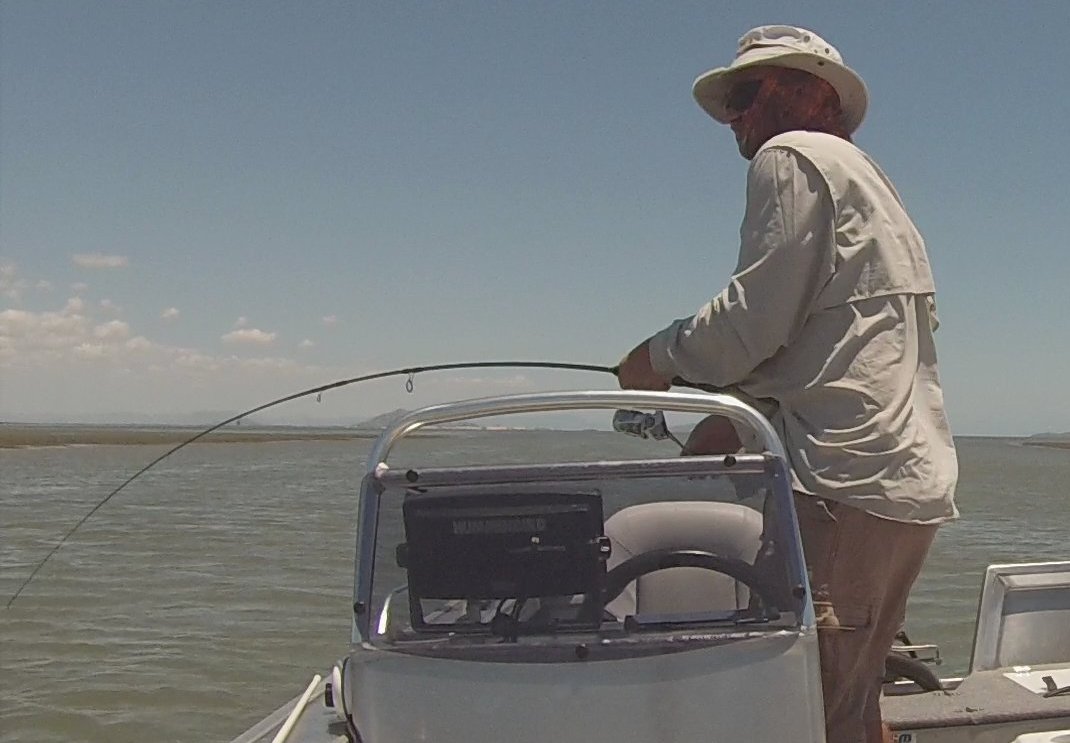 The silver flanked barra eventually tired and lay beside the boat ready for me to slip the net in, although this was not without dramas. As I tried to slide the fish into the net, the front treble hooked into the net, stopping me from moving the net over the fish, or removing the net. I have lost fish this way in the past and my heart rate immediately skyrocketed, because I only had one hook pinned in the corner of her mouth. I immediately flicked over the bail arm on the fishing reel, dropped the rod and leaned over for the lip grippers. Precariously I gently gripped the fish’s bottom lip and leant over the side to support the barramundi’s belly and heaved my personal best barra over the gunnels, complete with net and lure still hanging from her mouth. That done, I began erupting into cheers that I’m sure were heard kilometres away!

The beautiful barra measured in at 108cm and was in prime condition. After a couple of quick solo happy snaps, this chrome plated, prized fish was gently lowered back into the water and was swum back to strength so she could fight for another day. I called it a day after this fish; there was no possible way I could have topped this capture. 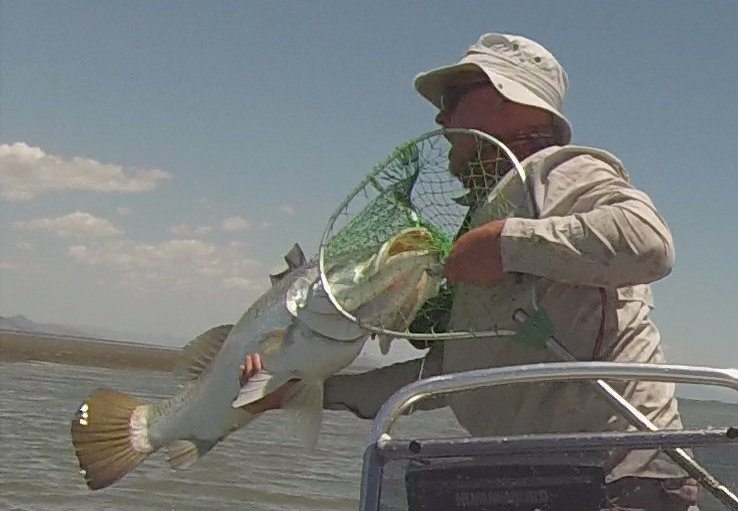 I don’t purposely go out to target these larger female barra, as they are the breeding stock for thousands more barra, however, encountering such a magnificent fish in such prime condition is something special. Seeing this trophy sized saltwater barra happily swim off after my encounter was enough to fulfil my barra fix for months to come. Well, maybe…

Until next time, stay safe and tight lines.