A lesson in bluewater jigging 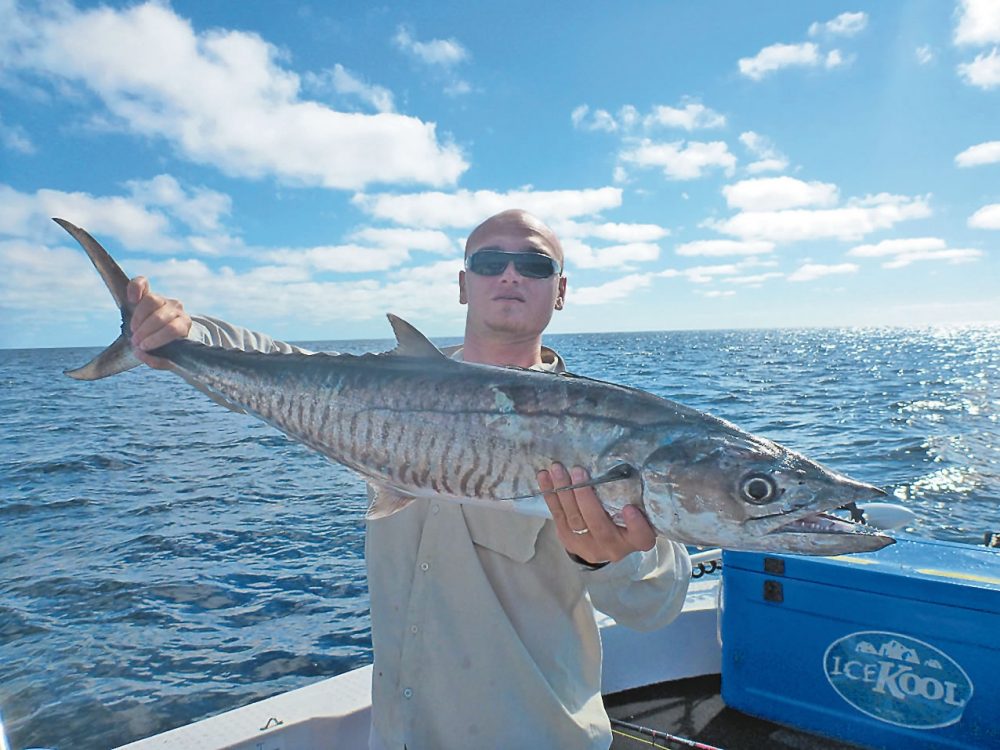 I’ve always been somewhat envious of fishing charter operators, not so much for the customer and business interactions, but more so for the fact that these people have been able to make a living by going fishing and putting people onto fish.

On the flip side, fishing can be tough, as we all know, and these professionals are still required/expected to find their clients some good fish, and this is where they fall back onto their knowledge and experience on the water to create successful trips. This one single ‘knowledge’ element is a reason I will always strike up a conversation with anyone who spends so much time on the water and more to the point, I’ll always happily jump on board as an extra if a position arrives.

When Carlo from Fishing Charters Townsville gave me a last minute phone call to make up numbers on a reef trip on board his 5.3 Polycraft, the decision was easy. Early the next morning we began heading out past the Lucinda jetty to fish around Bramble Reef. Townsville Fishing Charters offers small group fishing charters of up to three clients per trip either fishing inshore or offshore, weather dependant. Today Carlo had two seasoned fisherman on board, Pete from SEQ and myself, ensuring his job as the skipper and deckie was going to be a little easier. The plan for the day was to do a little deep water jigging early, followed by a little bottom bouncing for reds and then move to the shallow reef edges chasing coral trout on soft plastics, a technique I’ve never had too much success with.

Deep water jigging is a technique I’ve only dabbled with on a handful of trips. One standout trip was fishing offshore Moreton Island with John Palermo chasing kingfish and amberjacks in 60-80m of water. I was not sure whether or not Carlo would adopt the same types of techniques here in NQ and it had me eager to learn. As the throttle was pulled back into neutral, the sounder revealed mass bait balls with some hefty predators moving through and around. Carlo sorted out the drift direction and rigged a couple of Ugly Stiks up with 90 gram slugs attached to 80lb leader. Peter and I were given a brief description of the technique of jig, wind, jig and wind in a repetitive smooth rhythm.

With rods in hand, Peter and I flicked over the bail arms on the Saragosas and began dropping the metal slices down 45m to the bottom. We both touched down about the same time and we began our rapid jig-wind retrieve, finding the rhythm wasn’t as easy as Carlo made out. However, mid-way through the water column my metal slice was intercepted by a fish and began pulling drag from the reel. To say I was impressed that we were onto fish on our first drop was somewhat of an understatement! Hopefully this was a sign of things to come as the day progressed. My drag’s screaming was soon accompanied by Pete’s drag, who also managed a hook up on his first drop. Carlo was soon un-hooking two juvenile Spanish mackerel boat-side. The next drop saw another double hook-up. This time Peter’s fish wasn’t coming up as easily, but my undersize Spanish was soon un-hooked and sent on its way. Meanwhile Peter still battled with a fish that continued to take long, powerful runs. The fish was eventually subdued and Carlo securely gaffed the fish, bringing the 6kg Spanish mackerel on board. After a few happy snaps, a quick manoeuvre and we were ready for the next round, although this was cut short as Peter was bitten off on the drop. My lure made it to the bottom and as I began my retrieve the lure was belted several times over, but failed to hook up. As my lure neared the surface, I stopped the retrieve and attempted to send the metal slice to the bottom once more… but the lure failed to drop. Somewhat confused, I began to bring the 80lb braided line in to realise I had been bitten off and my leader was shredded some 20cm up from the bite off, obviously the fish had been tailing my lure from the depths.  With the lesson learnt, I reached over for my light 10kg spin rod matched up with a brand new Stradic 5000 and I rigged up a slug. In doing so, I managed to draw the attention of Peter and Carlo who both wished me well followed by lots of laughter and other smart remarks that shouldn’t be written. With a point to prove now and the added motivation, I dropped the slice down and began the retrieve which was interrupted almost instantly. The rod buckled over and my little Stradic’s drag screamed for the first time as the fish took a line-burning run. Peter and Carlo both stopped to watch, heckling all the way, as I helplessly held onto the rod watching as the 30lb braid burned out through the guides. I began to think that I may be a little under-gunned to this fight.  Showing confidence in my outfit, I tightened the drag and began to slowly retrieve bits of line through very short pumps. My attention soon turned to Peter who managed to get his line down and also hooked up to a mackerel. Soon the pair of us were pacing up and down the side of the boat as we tried to avoid line twist. Peter’s 4kg fish was the first to be gaffed while my fish was slowly getting closer to the boat. I led the fish towards Carlo, who was ready with gaff in hand, and on the second attempt the respectable 10kg Spanish mackerel was brought on board ready for some happy snaps.

The mackerel were now pushing up towards the surface and the occasional fish broke the surface as it sped up through the bait ball. For a change of tactics I cast the slug out from the bow of the boat, allowed it to sink for around 30 seconds, before ripping it in as fast as I could wind. Just metres out from the boat, in plain sight, a rampaging Spanish grabbed the lure and headed off in the opposing direction. Meanwhile, once again, Peter was hooked up at the back of the boat. My fish headed towards the stern of the boat as Peter’s fish was edging up towards the bow and there were a couple of iffy moment where our braided lines almost made contact. Some fancy footwork between Peter and I ensured our lines remained tangle free, allowing Peter to safely bring his bludger trevally into the boat soon to be followed by my 90cm Spanish. I decided to have one more final drop which resulted in my toughest battle for the morning. The large bludger trevally had me puffing as it toughed the fight out deep, using the current and its body size to its advantage, testing both me and my light gear. Carlo reached out and tailed the fish to bring it on board and I let out a sigh of relief from exhaustion. The hooks were quickly removed and the fish was speared back into the water still full of energy. With that, we headed out for some relaxing bottom bouncing to allow us to recuperate from our impressive short jigging session.

Moving into some slightly deeper water, we sent down some baits on paternoster rigs looking for reds. I was quickly rewarded with a pan size nannygai and Peter was soon hooked up to a better fish, although the fish was soon lost as the hook pulled. This shut down the fish, so another move was in order. This same scenario played out a number of times with Peter managing many solid hook-ups, only to drop the fish and shut the school down. So it was time for Caro to give me a lesson on soft plastics up in the shallows while Peter and I fished flesh baits on the bottom for coral trout.

We moved into the shallow edges of Bramble in 20-30m to begin drifting. Carlo rigged our hooks with bait and we began fishing the bottom. The fishing was quiet; it was mid-way through a tide turn and notably a period of the day when the fishing usually slows around the reef. This allowed Carlo time to rig up a 7” Jerkshad in Nuclear Chicken on a 1oz jig head and drop it straight to the bottom. The technique Carlo demonstrated was quite simple; as we drifted over the edges of the reef, Carlo lifted the rod tip up high and then dropped the rod tip back down, ensuring he kept in contact with the plastic during the process, as most bites usually occur on the drop. As expected, the skipper hooked up to coral trout within a few minutes, proving the technique works, particularly as we were unable to get a bite on flesh baits. Eager to give this a go, Carlo handed the rod over to me. The first thing I retrieved from the reef edge had Carlo calling for another small trout, although as it reached the side of the boat the red piece of soft coral didn’t resemble any trout I’ve ever landed before. With Carlo publicly announcing that he’s not going to call any more fish, he released the soft coral back to the depths as I sent the plastic back down to the bottom and managed to catch the bottom three consecutive times. I clearly require a little more practice for this type of fishing.

From there, Carlo moved us back into the deeper water where we managed to bring a steady stream of fish over the gunnels. Although after the hot morning bite we’d endured, I would have been satisfied if we had headed in early. I know my shoulders and arms were aching for several days as I slowly recovered from this insightful trip. If you are looking for a small group charter for either offshore or estuary, give Carlo a call 0403 386 722 or check out his website www.fishingcharterstownsville.com.au.

Thanks again Carlo for the adventure. Till next time, stay safe and tight lines.