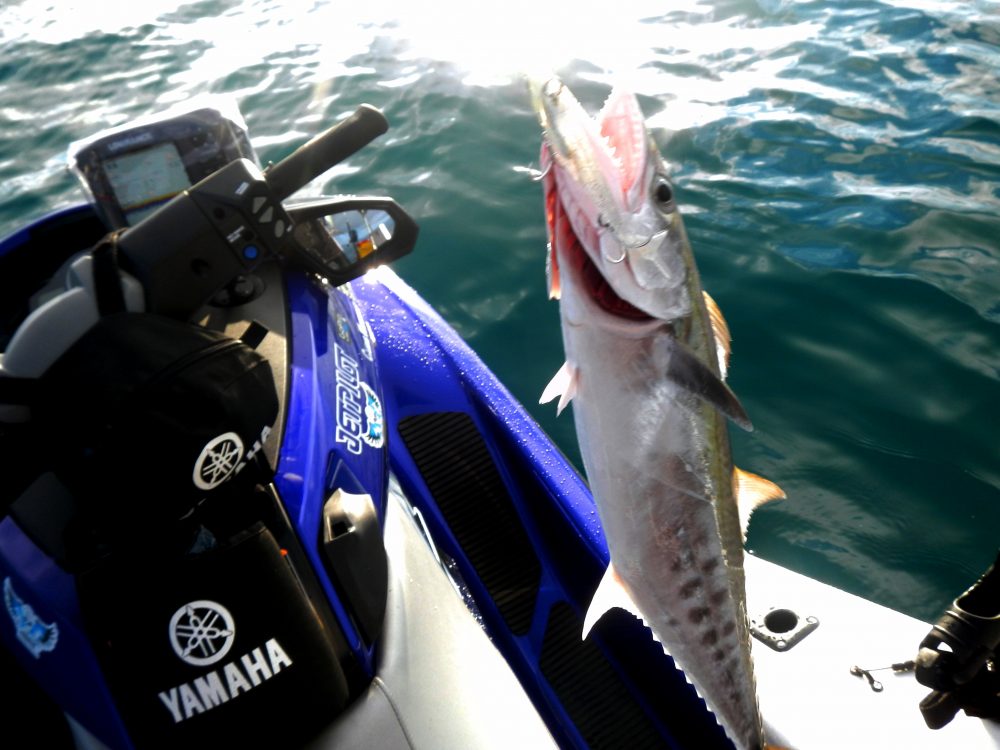 How many vessels cruise at 65km/h, are easy to launch, take just minutes to clean, require minimal storage space, can get to the reef and back in under an hour on less than $30 of fuel, and allow you to fish in such a way that you “feel guilty” due to the ease of it?

Not many!  However, I just perfectly described Chris Hopkins’ Yamaha WaveRunner FXH0.

STOP!  Don’t flick the page in disgust and mutter something about “bloody noisy, fuel burning contraptions that just go around in circles!”  Chris’s ski has some remarkable advantages for keen anglers that are earning him a grudging level of respect and interest from boaties each time he rocks up at the ramp – and I can see why!

“I can blast 30 minutes out to Arlington Reef, watch the sun rise, fish for an hour, catch some reef fish for dinner, then blast back to the shipping beacons, catch a few mackerel for fun, and be home in time for work at nine, with no one the wiser,” Chris revealed.  “Lately though, I’ve almost been late a few times because interested boaties have been pulling me up at the ramp with a barrage of questions about the fishing attachments on the ski.”

Now, Chris’s Yamaha WaveRunner isn’t your usual tube-towing, donut chucker; this thing is decked out as a fishing machine!  It all started when Chris, now in his late 50’s, decided that he wanted something new, something with “more purpose” than fuel burning on the lake.  He’s previously had two Kawasaki jet skis, but after seeing some footage online of some South African anglers catching really impressive fish from their skis, he decided to investigate the concept further.

“I spoke with some experts in South Africa and quickly found out that they mostly use Yamaha’s due to their stability for fishing and launching into the surf.  I also discovered that there are hundreds of jet ski fishers in New Zealand, so most of my initial information gathering was done by talking to people overseas.”

“From there, I went into Cairns Water Craft and Bren was a great help in setting me up.  I decided on the non-supercharged FXH0 for the sake of fuel economy and Bren and team fitted a through-hull transducer and Lowrance HDS5 GPS fishfinder combo and a duel battery system.  My first accessory purchase was a Whitey Box – practically an esky with rod holders – made down near Moreton Bay.  I then set about getting some of the pods I’d seen used by the South Africans.  I discovered that Shoreline Jet Skis in Coomera carried the Race Tech Yamaha Pods, the very ones I’d seen.  So I immediately purchased those.”

Chris revealed that the Race Tech Pods took his ski to the next level.  “They make it even more stable, because they act just like outriggers, and they are amazing for storage.  I have room for all my tackle in a specialist compartment, 20ltrs of extra fuel, and there’s even a live bait well!  The pods have two adjustable rod holders, one on either side.  They also have no effect on the WaveRunner’s performance whatsoever.”

Once set up, Chris discovered two things: the WaveRunner provided him with some exciting and surprising fishing opportunities and he was getting out on the water more than most actual boat owners.

“On my very first trip I caught a nice Spanish mackerel, and I was instantly hooked,” Chris said.  “From there I’ve worked out that I can get right up on top of the reef edge and sight cast tasty coral trout and other reefies without fear of grounding.  It’s actually so easy that I feel guilty.”

Chris has also made an interesting observation that is sure to prick the ears of keen pelagic enthusiasts.  “The jet of the ski doesn’t seem to spook the fish the way a propeller does.  I’ve been right in the middle of a school of yellowfin tuna in wake mode with fish and bait bubbling and feeding all around me and the only things that get spooked are the birds!”

The bubbles of the jets also seem to bring plenty of mackerel in for a look and this pays big dividends when trolling.  Unfortunately though, you can’t have the fish to yourself all the time.

“One trip I had a nice mackerel on only to look down and see a three metre tiger shark hanging under the ski,” Chris recounted.  “It waited patiently until the mackerel was tired and had started circling under the boat before moving in and snatching it and popping 50lb line like cotton.  Talk about an adrenalin rush!”

As for getting out on the water regularly, Chris averages around five trips a month.  He explained to me that, not only does he not need to worry about getting a crew together, in Cairns the wind usually pops up most days about midmorning. With this in mind, and by having a fast fishing option, he can get up, flick on the ski’s fitted LED nav’ lights and be fishing the reef and then home again while it’s still calm.  Not a bad system.  In fact, he revealed that sometimes he even has time to stop at Fitzroy Island for a coffee on the way home!

So, what’s next for Cairn’s most committed jet ski angler?

“Well, first I want to get a wahoo off the ski.  We’ve named it “Blue Wahoo”, so I think that would be fitting.  Secondly, I’d love to get more people interested in jet ski fishing.  It’d be great to have some other anglers to share the experience with and to keep an eye on each other on those long range trips.”