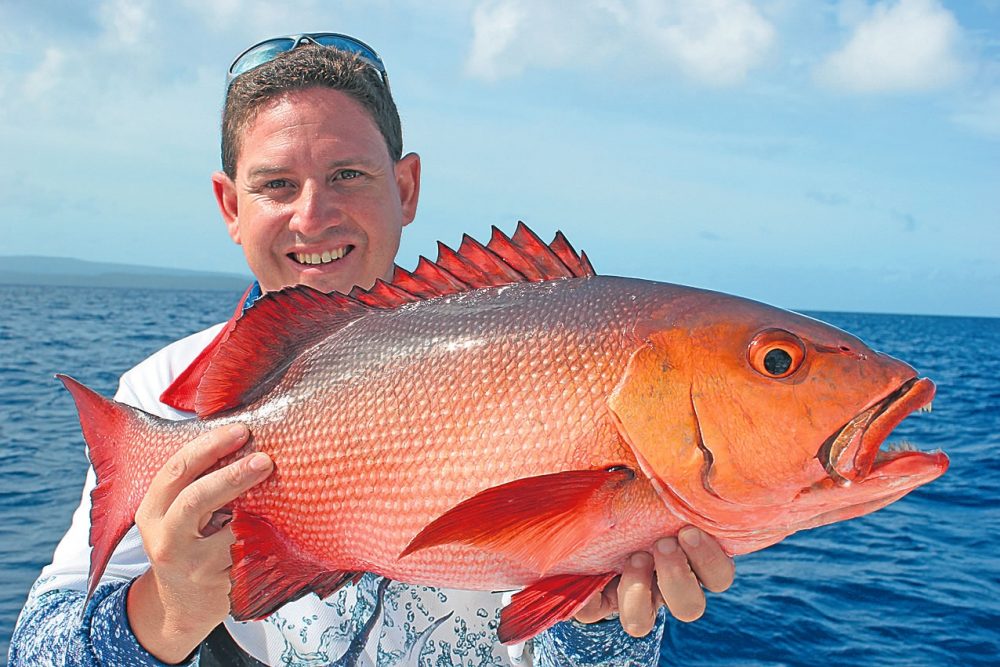 As the Edgewater Centre Console skipped across the deep sapphire stained ocean, swarms of silver and turquoise flying fish took to the air creating a blanketing contrast against the towering emerald mount which rose ahead of us.

Watching these hybrids flee in fear from our presence, it was as though they were pre-empting the day’s piscatorial predatory purpose.  Soon enough the boat glides off the plane and we find ourselves sitting with baited anticipation in the shadow of an extinct volcano. Whilst its guttural eruptions hadn’t been heard in more than a century, remnants of its violent past scatter the foreshore in the form of weather-eroded volcanic boulders which had been tossed from its molten belly like pebbles. Beyond this fossilised volcanic graveyard, the dominating blackened charcoal gives way to a richly coloured tapestry of fringing reef which in turn shelves dramatically into oceanic depths which are more suitably measured in atmospheres rather than metres.

As we turn our attention away from the dormant giant and focus on the sounder, ironically the electronic image is almost a mirror of the landscape surrounding us. Towering sea mounts and pinnacles materialise across the screen, some of which had probably once been part of the volcano standing over us. Our predatory instincts take over and jigging rods are loaded with knife jigs, and as the braid begins to fall off our spools into the turquoise depths below we can’t help wonder what their fate will be.  Lines go slack and soon our jigs begin making their journey back to the boat and in an instant the difference between the two landscapes becomes very apparent. Whilst the above-water volcanic land may no longer be violent and menacing, the underwater world is a complete contrast as our jigs are brutally mauled in rapid succession.  The anticipation fuelled silence is lost with the humid air now punctuated with the sound of screaming drags, feet shuffling to gain position and, above all, the sound of straining and exhaustion as both rods and fishermen buckle over to breaking point.  Finally, these sounds move to a mixture of both joy and sorrow. For those that won, their trophies lay in their arms, and for those that lost, sheer disappointment of losing a fish of a lifetime.  I remember taking a minute to soak all this in and couldn’t help thinking this could only be described as pacific fishing paradise, and then it was back down again to once again do battle in the malevolent underwater world below.

Paradise Found!
Welcome to the fish rich waters of Efate.  Efate is one of the many islands which make up the majestic Vanuatu Archipelago.  Efate is actually the most populated island within the Vanuatu group of islands and is home to its capital – Port Villa. Unlike many other exotic fishing destinations, Efate is actually a breeze to get to and is only a three hour flight from Brisbane or four hour flight from Sydney, with major airlines running services every day of the week.  There are no four seater single prop aeroplanes or island hopping trips needed to get to this piece of pacific paradise, and with distance and access not an issue, taking a weekend trip to Efate for a dog tooth jigging session is very doable.  I have been fortunate enough to fish throughout much of the Pacific and Efate is by far the easiest to access and my back, arms, and legs will all agree that this ease of access does in no way compromise the diversity and quality of fishing on offer.

Hands down Efate’s greatest draw card for anglers is its sheer abundance of large trophy fish. The reason for this abundance can be attributed to a number of underlying factors. Firstly, Vanuatu, compared to other main Pacific nations such as Fiji and New Caledonia, is not as developed and subsistence village living is still very much in practice. Small pandanus woven hut villages with no electricity are prevalent throughout the archipelago, including Efate, with many local Ni Vans still living as they were prior to western influence, with minor exceptions. Even though many of the local Ni Vans are a coastal dwelling culture, modern boats are far and few between. Some villages have basic fibre glass panga style boats with small outboards, but dugout canoes are still predominately used, especially by fishermen. Secondly, ciguatera is concentrated in many larger fish species. This means fish species such as coral trout, red bass, giant trevally and even some of the more common reef species which we eat in Australia are not edible. As the vast majority of indigenous fishermen are fishing to provide food for their village, they are more likely to target smaller fish or other species which are less likely to harbour ciguatera. Shark is one desirable catch for the locals and, as a fisherman who hates losing trophy fish to the men in grey suits, this is a big bonus.

Being a volcanic based archipelago of islands (in fact Tanna Island just south of Efate has one of the few remaining active volcanoes which you can climb), Efate is surrounded in some mind blowing deep water. Whilst the Island is shrouded in fringing reef, these shallow coral reef systems quickly drop away to depths of one hundred metres plus.  Free-diving around many of these fringes quickly provides an understanding of this where the depth can go from two feet to a bottomless deep blue of nothingness often just 20 metres from the shore. These deep waters are far from barren and contain large coral bombies and pinnacles which are home to all sorts of big toothy critters. Small sea mounts are also quite prevalent and there is certainly no shortage of structure.  This deep water opens up all sorts of fishing opportunities, with the main two being jigging and bottom bashing with plastics and bait. The jigging, especially with metals, in Efate is some of the best I have ever experienced, particularly for tropical species like dog tooth tuna and massive coral trout. Be warned however; this is not for the feint hearted and back braces and gimbles are a must, as there are some absolute monsters lurking below.  This is no place for light line or even drag of any kind and weapons of choice will include reels which can pull at least 15kg of drag and rods to match. Line class begins at 80lb but can go higher and on my last trip I was busted off on 80lb on numerous occasions and had one dog tooth break my 120lb twisted leader on a plummeting dive which almost had me out of the boat.

The pinnacle target species for jiggers and bottom bashers in Efate is the dog tooth tuna, which are by far the hardest and dirtiest fighting fish in the Pacific.  Even if you manage to get these toothy barrels of muscle away from the reef, give them an inch mid way through the battle and they will find a way to empty your spool or find the razors below.  Doggies range from 10kg right up to Volkswagens and you will have to be a brute of an angler to land one over 50 kilograms. These fish are in abundance in Efate and it’s not a question of whether you will hook a dog tooth but whether you will have the kahunas to get it to the boat. On my last trip I went zero for twelve in a two hour session and it was by far one of the most painful experiences of my life, but it was simply awesome.  They truly are one of the greatest piscatorial challenges, and you have never felt a fish run until you have hooked a big dogtooth.

Whilst the deep water fishing is world class, the surface action in the waters of Efate is not far behind. Current swept island corners are not in short supply and when these pressure points run across shallow fringing reef they become magnets for large trophy fish which love to inhale large poppers and stick baits. There is no time lost moving from deep water jigging to shallow water surface as this can often be a matter of moving 50 to 100 metres closer to shore. Working the areas where the fringing reef drops off to the depths is where you will find the most action and just like the deep water, it is red hot. The presence of such a dramatic deep water drop off means large fish are always prowling and a large surface disturbance is all you will need to get big GT, trout, red bass and even dog tooth tuna going vertical on your popper or stick bait.   By far the most common top water species is the red bass, which will generally find your stick bait or popper right at the edge of the drop offs. These fish are just as aggressive as a mangrove jack and strike and fight just as dirty. They are usually found in packs and watching these swarming red devils swipe and maul your lure is simply exhilarating. Whilst considered by catch in this part of the world, these crimson wolf packs are a personal favourite and one I never tire of seeing.

Large blue spot coral trout are also in abundance on Efate’s deep water ledges and also love inhaling large poppers and stick baits. When I write “large” it can be a bit of an understatement, as fish up to 30kg are not uncommon. When a trout this size materialises on your popper it tends to send you weak at the knees, however, lose your composure and they will have you in the reef before you know it.

The pinnacle of surface fish in Efate is the giant trevally. GT are also prolific in Efate across the coral flats and fish pushing 40kg are not uncommon.

Efate has plenty of land based action on offer, including some right in the heart of Port Villa. Much of the coast line is encrusted with shelving reef and working plastics and surface lures over this reef will score plenty of small to medium giant trevally, bass, coral trout and various other reefies.  Travel rods like the 5 piece 7 foot spin Nitro Viper matched to a quality 6000 sized reel will provide plenty of grunt and casting distance whilst at the same time take up little room in your luggage. Mini bus transport is prevalent on Efate and the drivers will be happy to take you to a top land based spot for less than $5 each way. If you are land based fishing, there are a few important points to remember. Firstly, there are sanctuary zones in Efate and many of these are crudely signed. Also, some beaches and foreshores are part of village land, so check with the locals before frothing the water. Overall the Ni Vanuatu people are one of the friendliest in the world and are really laid back, so it is quite safe to treck around and do some exploring and chase a few fish land based.  The area inside the reefs will offer land based anglers fish such as buffalo emperor, long nosed emperor, coronation trout and blue trevally, which are particular abundant. Waiting for low tide so you can get beyond the lagoons will have you in prime position to stalk large bass and GT with ease.

Every fisherman has a special list of target species and locations they want to fish before kicking the burley bucket. If your list includes going head to head with massive dog tooth tuna, behemoth blue spot coral trout, and arm stretching giant trevally in the midst of some of the most beautiful natural beauty than get yourself on a plane to Efate as soon as possible. It truly is a special spot and a place where angling dreams come true.