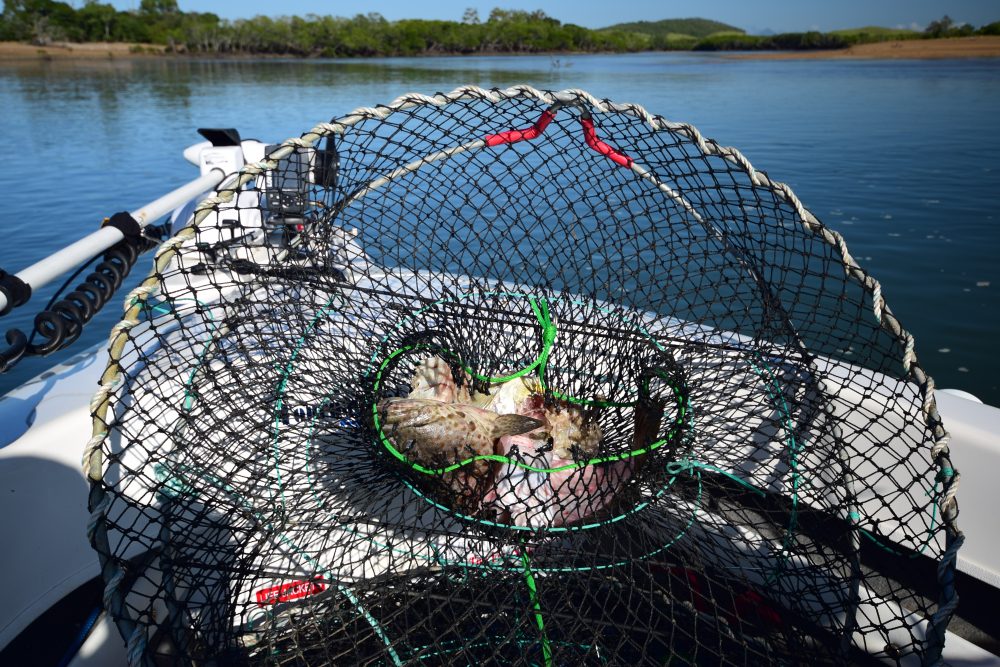 Catching crabs and the letter ‘R’

There are many theories concerning the practice of chasing mud crabs with none more so than the saying that you can’t catch crabs during months that don’t contain the letter ‘R’. I am not sure where this theory came from, but it seems to be one of the most commonly accepted crabbing rules fishermen have adopted and passed on from generation to generation.

My first encounter with this supposed theory came about as a young tacker growing up in Tully. I would always tag along with my Dad pulling crab after crab from the Tully and Hull Rivers and just couldn’t get enough of catching and eating these big clawed monsters. To say my old man loves mud crabs is a bit of an understatement, and if it wasn’t for the development of cholesterol lowering medication I am pretty sure he would have fallen over long ago with a half eaten crab claw still in hand. So when the cooler ‘R’-less months came around and my father began putting the pots away I got a bit confused as to why we were no longer chasing muddies until he explained the theory that you can’t catch crabs during months without the letter ‘R’.

Fast forward a quarter of a century and I now constantly find myself scratching my head when pulling pots in May, June and July as for as long as I have lived in Bowen these months have proven to be the most consistent and prolific times for catching a feed of mud crabs. Whilst I do acknowledge that Bowen has to be one of the better places to find a crab in Queensland, from what I have heard, read, and seen, the story seems to be much the same in many locations up and down the coast of our great state. To share a recent experience; just the other day my old man arrived from his now home of Brisbane for his yearly dose of north Queensland living and of course to get his fill of muddies. Now when I suggested he come up in June his first exclamation was it wouldn’t work as the muddies wouldn’t be running as the ‘R’ was missing and this just wouldn’t suit. I explained that this was not the case and in fact there would be so many crabs around that he would probably be best to bring a spare packet of his cholesterol medication just in case. As it turned out the crabbing was best described as sensational with plenty of full pots of big rusty bucks including a couple pushing the magical 2kg mark. I think it had him re-evaluating his ideas on the letter ‘R’ especially when we got back to the ramp and people were trying to give them away as they were over their limit and then even further with people in my street trying to give them away as well!

As mentioned before this is certainly not a ‘one off’ as these ‘R’-less months consistently produce year in and year out. I attribute this to a couple of reasons. Firstly everyone will agree that trying to crab during the monsoonal months can be a little tricky. Creeks and rivers are in full flood and often flush many of the crabs out with the fresh water push. This can limit the concentration and stability of crab populations and whilst crabs can still be caught, they are often very empty or in unpredictable numbers. Second, as conditions ease these populations tend to become a bit more stable, food becomes more obtainable and by the early winter months many young crabs or empty crabs begin to mature to legal size. I have lost count of how many just undersized rusty crabs I have thrown back in the month of April which pays testament to this. Come May/June many of these crabs have shed into those big finger crunching bucks which crabbers just love to see. Many crabbers including commercial guys also believe that the cold snaps often stirs the crabs up and gets them out of their holes and feeding which leads to the big runs of crabs. I am not sure why this is the case because out of the water crabs become very lethargic when they are iced down. Whatever it is, it seems that there are plenty of people walking around sideways at the moment due to the outstanding run of crabs during these ‘R’-less months and not just in Bowen either, with plenty of different locations right up and down coast proving to be extremely fruitful over the cooler months. Maybe someone just made up the theory so they could have all the good crabs for themselves during the ‘R’-less months, all I know is there are plenty of people proving it wrong and having plenty of fun and great feeds at the same time.