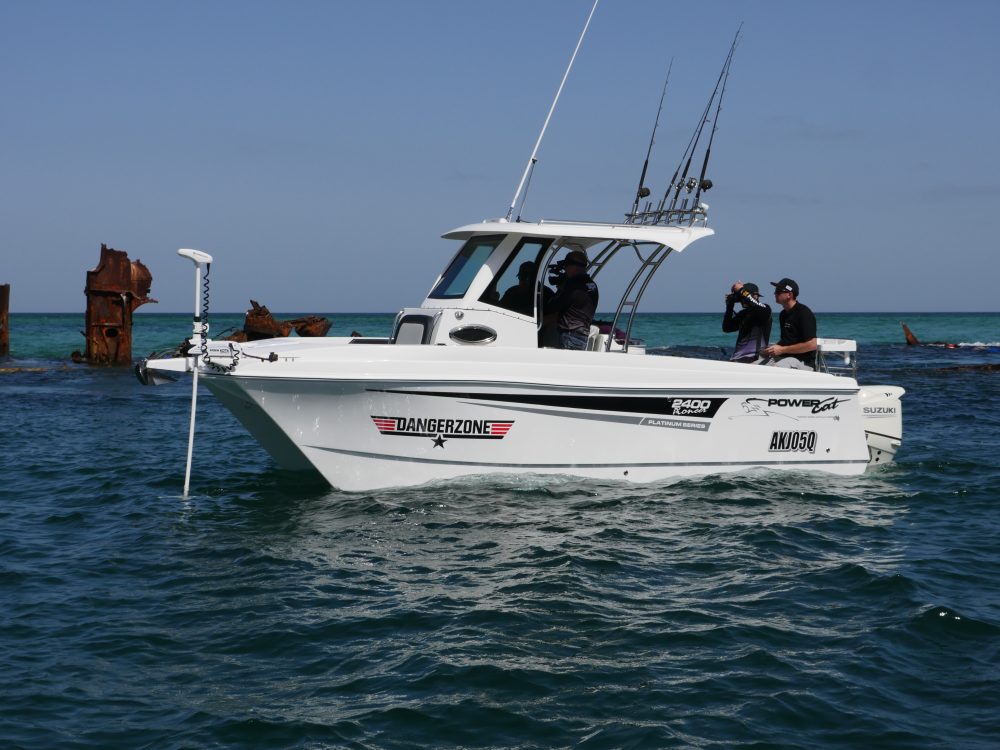 Earlier this year I was invited to attend the BLA media day at Tangalooma. If there’s one thing that I absolutely love it’s playing with new gear and seeing what cool new gadgets are on the market for the average recreational boater to make their life just a tad bit more enjoyable.

The Humminbird mega 360 was the main attraction, but there were quite a few other toys that need the spot light shone on them as well.

I boarded one of the demo Haines Hunters and was immediately drawn to what the skipper was sitting in. It looked like a bit of space age technology, something that looked like it would be more at home in maybe a James Bond film.

The BLA staff introduced me to the Shockwave suspension seat S5. It’s a base that has a shock absorber built in and you can mount any comfy chair to it. I was immediately impressed as the idea was spot on. When I see these sorts of products I think about how it would suit me. I can honestly say I’ve had plenty of trips in offshore waters where I have either had to stand and let my knees and legs cop the abuse or you sit and your back takes the hit. 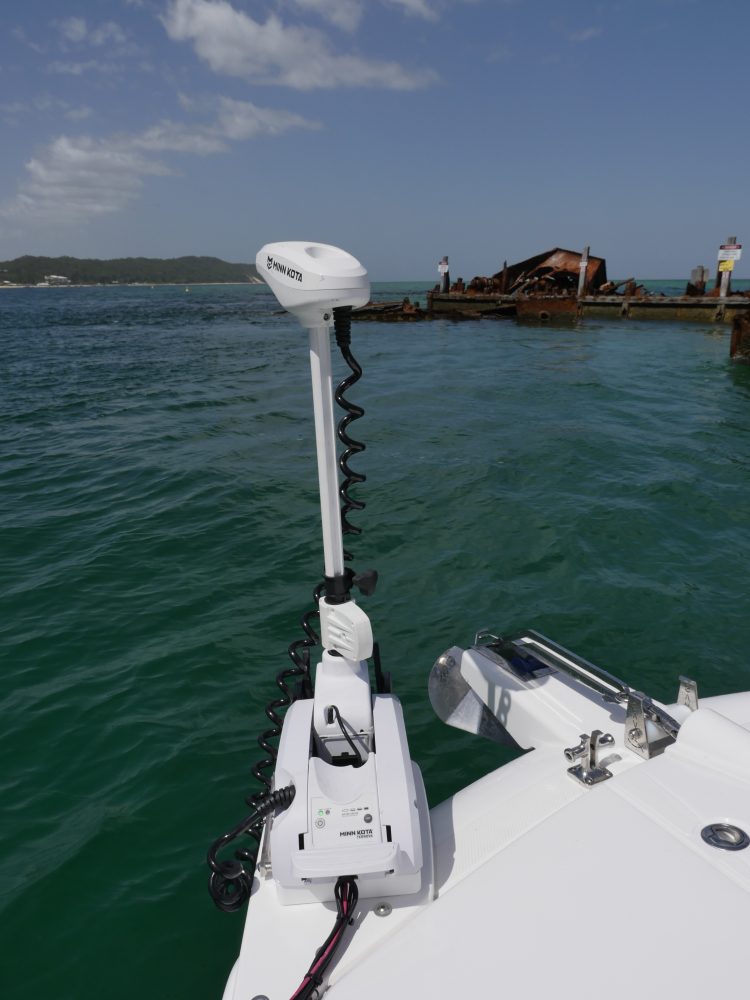 Having a good look over the base I could see that they hadn’t skimped on the materials. I found high pressure die cast aluminium components and stainless steel hardware. If you’re going to build a product for the saltwater environment then it needs to be built tough so two thumbs up already.

That’s enough with looking it over let’s see what this bad boy can do. Gary the skipper pointed the Haines in the direction of the wind and opened the throttle. It was blowing around 20 knots so what we were heading into is what I would describe as a standard bay chop. No rolling swell just that short and sharp chop that so many of us are accustomed to when returning back to the ramp after heading wide.

I was sitting up the back of the Haines while trying to get some video of the Shockwave in action. I was in all sorts trying to keep my phone somewhat stable enough and in the end I just gave up. I was having enough trouble just trying to keep my butt on the rear seat while Gary was hammer down and enjoying the test run.

Watching the base absorb every impact was truly amazing. Once the throttle was taken back to idle it was my turn to sit in the skippers chair. I really wanted to put this seat to the test so I just grinned at Gary and I think he knew that it was now his turn to take a beating. 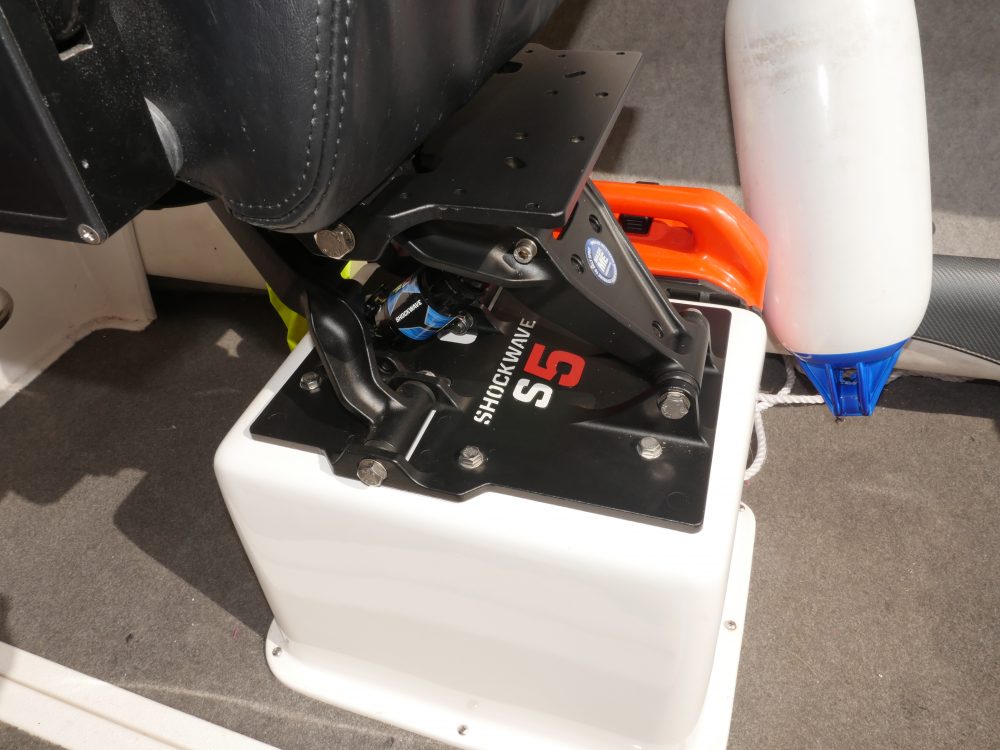 Shockwave S5 base, all quality.

I put the Haines back up on the plane and straight into the chop. All I can say is WOW! Every time I hit a wave I could see the jolt coming though the hull and Gary bracing himself for it. At no time did I feel any discomfort when charging through the chop. I tried a few different angles and it was all smooth sailing.

The Shockwave S5 performed flawlessly, has been built tough and has a fantastic look to it. I would highly recommend anyone to look at this product. I asked the question just how popular they have been and I was told the response has been very positive.

As with any quality product they aren’t cheap. The base by Itself has a recommended retail of around 2K. Some people would bawk at spending that sort of money on accessories but when you’re spending 60-120K on a new boat why not make it as comfortable as you can.

The staff reported that most of the guys who bought one base were back to buy a second one in only a short time. Turns out that the skipper is nice and comfy but the deckie (in most cases it’s the partner or wife) requires one also.

Sure the smaller centre consoles have been doing this for years but we are only just starting to see bigger offshore boats with electric motors mounted to the front of them.

My wife has been up me for ages saying we need an electric motor for our Cruise Craft and I bloody agree. Big heavy anchors are a pain in the butt to handle unless you’ve got an anchor winch. In fact it’s this very reason that I don’t anchor when I’m offshore. 95% of the time I drift fish.

I won’t lie to you though, there’s plenty of times I would really like to be able to electronically anchor offshore. The number one reason would be when targeting large mouth nannygai. A drift through a school of nannies will generally spread the school. 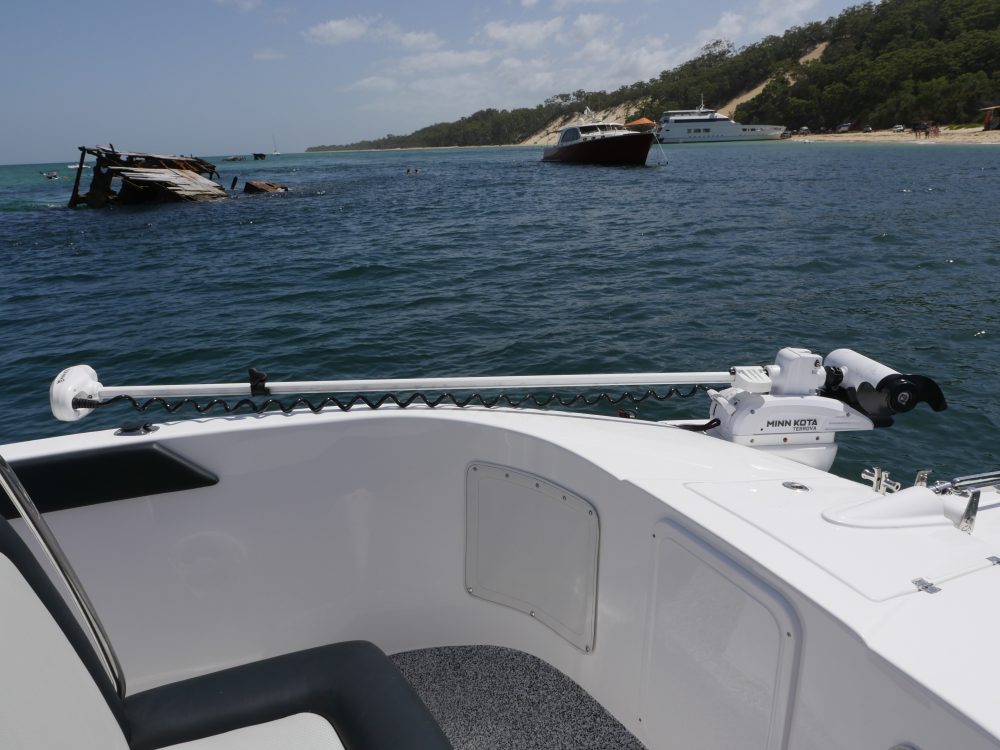 The test boat that the big Minn Kota was fitted to was a 23ft Power Cat which had a centre console setup. The Power Cat was a pure fishing weapon and the ride was amazing but that could be a story for another time.

We headed over to the Tangalooma wrecks to find a spot to deploy the Minn Kota. The first thing I would like to mention is that this motor isn’t an electric deploy and retract model so if you were looking at purchasing this product then you would need clear access to where the motor has been installed.

I grabbed the motor and manually deployed it into the water and pulled it back up again. Nice and easy so a tick in the comfort department. Anyone who has been to Tangalooma would know that the water does rip past those wrecks and we were on fairly big tides.

I re deployed the electric motor and then used the remote to move us around. Navigating around the wrecks with the tidal run was done fairly easily. I then hit the spot lock function. With both wind and tide doing their best to shift the big cat it stayed completely still. The only thing missing was being out on an isolated rock with the jigging rod.

Well there you have it, a couple of cool product reviews that might tickle your fancy. If you’re keen on either of them then duck into your nearest BLA stockist to grab some additional information or you can check them out at www.bla.com.au