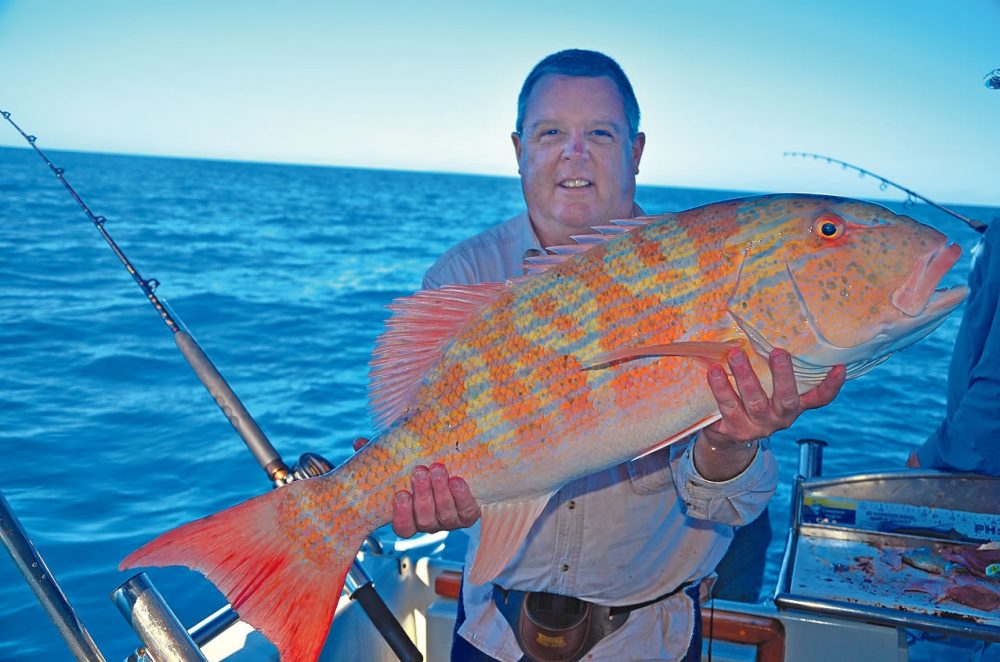 Welcome to part two of tips and tactics for fishing deep water. As I explained last month, some anglers find it daunting making the shift from fishing the shallow protected reefs or inshore waters to the deeper offshore shoals and rubble patches.

Last month I covered a few basics around making the initial move and how to go about it. This month I’d like to cover some basic tips on using technology and tactics to gain the upper hand when fishing the deep blue.

Good quality navigational charts are full of information that will help you finds some great deep water locations. Having a reasonable tidal flow is often important in holding fish in a particular location. Charts not only have current direction but usually the strength of flow. By reading the charts and combining the information with your own experience over time you will soon learn where and when to fish certain locations.

Some charts will also have little abbreviations such as “M” or “Sh”. These are in fact abbreviations telling you what the bottom in made up of. Looking for areas where these changes occur can yield some great results.

Contours are usually the first thing I look for when deciding where to look next. Often a simple change in the contour can give off tell-tail signs that the bottom might harbor a fish holding structure of substrate such as rubble or weed/soft coral. These changes and the ledges, peaks and drop-off around them are the places that you should be searching for.

Remember, just because you don’t catch fish doesn’t mean it’s not a spot fish will congregate. What I mean is, while catching fish is an obvious sign that an area fishes well, not catching fish doesn’t mean an area won’t produce fish in the future. This is where a good sounder helps. Being able to recognize good fish attracting structures, weed/soft coral beds or rubble patches is critical in finding good fishing country. To do this you need to learn how to use your sounder and what to look for.

The first thing you need to do is play around with your zoom. Often rubble patches and subtle changes in bottom can be missed unless you have your sonar zoomed in. While there is no set recipe, I like to cut out the top portion of the water column and only look at the bottom 10m or so. This will help you recognize variations in bottom density and pinpoint any small bumps or lumps. You’d be surprised how these small structures or changes can draw fish. Another little tip I learnt was that if I found structure I’d zoom back out to see the whole water column and pass over the mark, often at increased speed. This will give you a better picture of the underwater topography. Slow speeds and zooming often clouds rises and falls that mark small plateaus etc.

Knowing what different colours mean on you sounder is also important. Different colours mean different things, often to do with the density of the object the sonar’s “ping” is bouncing off. Often in deep water, rubble, weed/soft coral or changes from mud, shale and sand will only show up as a slight thickening or colour change close to the bottom. Your sounder’s manual or local dealer will be able to help you distinguish between high density colours (rocks, rubble etc.) or low density objects (mud, weed etc.).

One last tip when using your sounder is to keep it on while travelling to and from home and various locations. If you’re travelling at speed turn up the ping and scroll speed and look for signs of life as you travel. Often these signs are simply a thin vertical line on the display. If you do notice something “fishy” (pardon the pun), turn back and check it out. Some great new spots are found in the most unexpected locations by very tired fishermen heading home after a long day on the water.

As with almost every other type of fishing, fresh bait is best. And with deep water I tend to believe that the bigger the bait the better. This serves a few purposes; it keeps the bait available longer if pickers are around and offers up a greater scent trail for foraging fish to zero in on.

Many deep-water target fish, such as red emperor, put up dogged fights and require strong outfits and heavier rigs. I prefer to carry two different outfits depending on whether I’m fishing shallow or deep water. My shallow water or “trout” outfit consist of a 12-15kg (1.8m) rod and a Tekota 600 reel loaded with 50lb braid, 60lb wind-on leader (4-5m) and an 80lb paternoster rig with 5/0-6/0 tru-turn hooks. Whereas my deep water or “red” outfit consists of the same rod but this time paired with a Tekota 700 loaded with 80lb braid, 80lb wind-on leader (5-6m) and a 100lb paternoster rig with two x two ganged 7/0 VMC O’shannessy hooks.

To prove that you don’t need to spend heaps on every piece of your outfit, the rods I use are Penn Ultimate 601215 that I bought from Kmart for the princely sum of $50! They’re a hollow glass blank with a solid tip and are as strong as an ox and as tough as old boots. Sure they are a fraction heavier and not as pretty as some of the more expensive graphite/composite rods, but they have outlasted several other much more expensive rods I’ve owned. I bought my first one about 8-10 years ago and it’s still going strong. In fact, I rushed out and bought three more when they went on sale for $38 a few years back!

As for deep water baits, while the traditional squid and pilchard combo works well, I prefer to load up my ganged hooks with big fresh fish flesh baits (try and say that quickly!). Tuna, trevally and hussar all make good baits. The trick with the hussar is to leave the tail on and let it flap around in the current, that extra flash of movement can make the difference.

Live bait can also be used to great effect. While big baits such as hussar and small trevally work from time to time they tend to attract monsters from the deep that you’d prefer not to mess with so try jigging up a few pilchards, yakka or herring for an irresistible deep water snack!

One of the things many first timers find difficult to come to grips with is the question on whether to anchor or drift in deep water. Personally I do both, depending on the situation, and both have their advantages and disadvantages. Drifting allows you to cover more country and is best done when winds and currents are slight. It allows you to build up a picture of where you are fishing and will often help pinpoint where the fish might be holding. It’s also easier on the back and arms! Anchoring however can be a little more work but if the fish are on and you are skillful (or lucky) enough to anchor on top of them the action can come thick and fast.

What I found was the best way to go about deciding what to do is to do a few drifts first and only anchor if one of three things happens: if my drift was too fast, if there were other boats too close to drift or if I could pinpoint were fish were holding. If none of those things were an issue then I prefer to keep drifting.

Reading the signs or being “street smart” when you’re fishing plays a big part in success. While this also refers to things such as using charts and sounders to find those new hotspots, it also means being able to interpret other things such as whether a location has been over-fished, under-fished or just not firing on the day but has potential in the future. Often this can be done through studying you catch.

Obviously if your first fish over the side is a 10kg red, then that’s a pretty good indication of that locations potential. But what else can you learn from other catches. Many species will co-inhabit the same areas so it pays to play attention, even to your by-catch. These fish are what I call companion fish. For example, chinaman fish and red emperor often occupy the same grounds, so if you are onto a good bite of chinaman be patient and a red won’t be far away. Larger than usual hussar in deep water can also be a sign of good red emperor country. Landing small wire-net or honeycomb cod is also a good sign and many of my large-mouth nannygai (saddletail seaperch) spots harbor these small cod.

On the other hand, small-mouth nannygai (crimson seaperch) are often a sign that an area is overfished as they will fill a void left by their more fancied large-mouth cousins. While this isn’t always the case, if you repeatedly find smaller school-sized fish feeding in a spot that you think should produce large-mouth, it might be worth finding another location. Goldspot cod, however, usually have an opposite meaning. As these large, aggressive fish are usually found in lower numbers, and are often the first species to be caught from an area, finding one or two in a new deep water spot is a good sign that it hasn’t been over-fished.

Remember, while these are all good indicators, there are exceptions to the rules, but once you get a little experience under your belt you’ll soon start to recognize the various signs.

The very last thing I wanted to cover is record keeping. It’s probably the last thing most of us want to do after a day on the water, but if you make the effort you will find patterns or trends occurring over time. Don’t expect this to happen overnight, in some cases it takes many years to tease out patterns such as feeding times, best types of bait or jigs to use or even if seasonal runs might be earlier or later than usual.

There are various off the shelf record keeping books or apps (yes, Apple has fish record keeping apps!). Having said that, I personally have decided to simply use an excel spreadsheet. If you are wondering what you should record then here are a few basic things that make up the bases of good records:

There is quite a bit to digest this month but I didn’t want to leave anything out that might help a fellow fish-a-folk make the move to deeper water. Having done it myself not that long ago, I can tell you it opens up a whole new world of fishing that I enjoy greatly. So get out and give it a go for yourself! Till next month, Catch Ya!